There is something very special about countries with tropical climates competing in winter sports. Before the recent Winter Olympics in South Korea, there were a number of articles discussing how fantastic it was to watch a Ghanaian skeleton athlete or a Nigerian bobsleigh team. Of course, the Disney film Cool Runnings, about the Jamaican bobsleigh team, is rightly very popular. In Sweden, not only do we have a team more used to the burning sun than the snow of Sweden playing a winter sport, they are playing a winter sport most people have never heard of.

The sport of Bandy is by no means widely known. It is hugely popular in Sweden and Russia, but outside of those near neighbours, only a handful of other countries play it. but It recently gained some publicity in the United Kingdom, as Prince William and The Duchess of Kent played it on a visit to Stockholm. However, the British press referred to it, on multiple occasions, as “Bandy Hockey”, a name which perplexed many in Sweden. It has some elements of ice hockey, some of football and some field hockey. It is played on ice but on a football-sized pitch with 11 players on each team and the ball is much like a field hockey one.

Though in Sweden it’s a real passion and something which has a great deal of cultural resonance and cachet. While football is, without doubt, Sweden’s most popular sport, the long winters mean that, from November to April, apart from a handful of friendlies and poorly attended cup matches, there is little football to watch. It is a time of year for Bandy and Ice Hockey fans, two groups who, despite the similarities between the games, rarely cross over. This allows fans of football and bandy to enjoy their dual passions without them clashing. 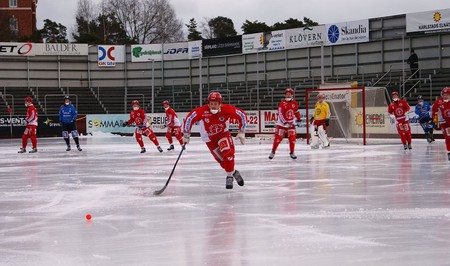 Bandy has a hardcore following in Sweden | © Ainali / WikiCommons

The World Championships, a two-horse race

As with most sports, there is a World Championship. Sweden and Russia tend to dominate the competition, with Sweden having picked up 12 titles and Russia 25, (with 14 of those coming as the Soviet Union). Together then they have won 37 of the 38 World Championships, with Finland picking up one solitary title in 2004.

Despite the title being concentrated in the hands of two countries, at the last World Championship, 16 teams entered with one name particularly standing out. The Somali national Bandy team have had to get used to standing out, ever since they entered their first World Championships in 2014. They have become a beautiful story, exemplifying the power of sport to drive social change and integration.

Sweden, as a country, has become more and more divided on policies relating to migration. Despite often being perceived as a country which is very socially liberal, there has been a hardening in recent years with right-wing party, the Swedish Democrats, polling at around 17% and likely to be Sweden’s third biggest party in this year’s election. 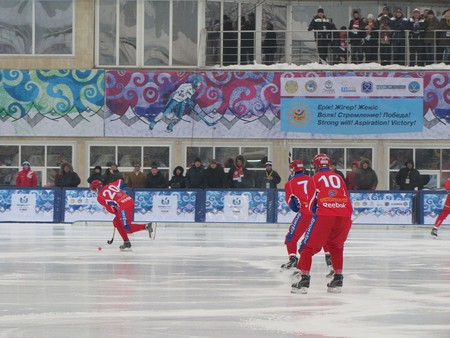 This has, in some cases, made life more difficult for people who have come to Sweden especially for people who have come from countries like Somalia. It has been very tough for people from areas that are so culturally and climatically different from Scandinavia’s largest land. In the town of Borlange, which is around 200km north of Stockholm, Hans Grandin worried that Somalian refugees were struggling to fit into the town and felt that something could be done.

He observed that there was already a football team for refugees, as is the case in many Swedish town and cities. However, there was not a bandy team. For many of the Somali boys, coming to Sweden was the first time they had seen snow, so the idea of skating at speed on it while chasing after a ball seemed impossible.

However, the team was formed and people soon became interested. One of the players, Ahmed Hussein, told The Guardian that all he knew about the sport was that it was, “something to do with the winter”. Despite their lack of knowledge, the boys loved to play and were really enjoying themselves as well as being very pleased to have the opportunity to do something Swedish and feel like they were a part of the town. 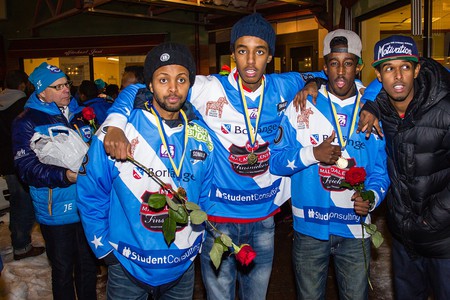 It’s not only about winning

The uniqueness of a Somali bandy team caught the attention of filmmaker Patrik Andersson, who suggested that they should become part of the International Bandy Federation. After doing this, they then had the opportunity to play at the World Cup in Russia.

Without much time to prepare they, unfortunately, lost all of their games and scored only twice while letting in 59.

But winning was not the point – and it remains that way now. Rather, it’s about participating and representing Somalia and Sweden. The team’s story was picked up by a number of international outlets, including The Guardian, CNN and the BBC, and was made into a film by Swedish TV presenters Filip and Fredrik. 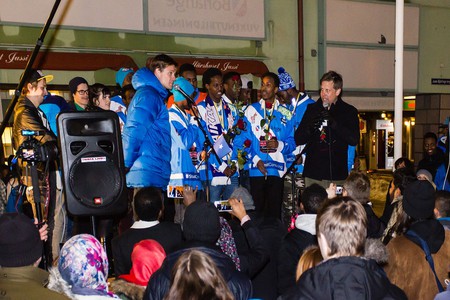 They have also continued to play, entering every World Championship since 2014 as well as playing as part of Borlange’s local bandy club, Peace and Love city, who play in Sweden’s second tier, the Allsvenskan. It is a lovely story which illustrates the power of sport as well as how innovative and imaginative ideas can make a difference.