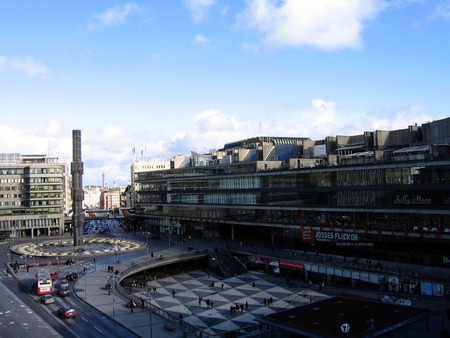 In every city there are certain places where people gather, central spots that create local celebrities and locales that serve as meeting places for people – from star-crossed lovers to friends to protestors.

For Stockholm, that place is Sergels Torg, Sweden’s most central public square. It was inspired by Johan Tobias Sergel, who was one of Sweden’s great sculptors and had one of his workshops close to the square. He was famed for being a playful, exciting and vibrant figure, so the idea to name a public square after him – that would feature demonstrations, meetings and public gatherings – made sense. 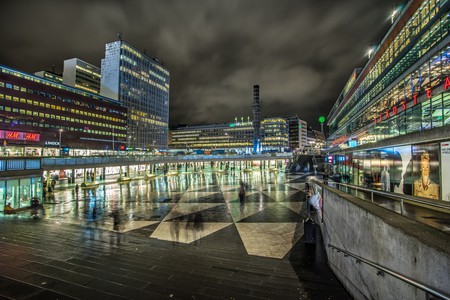 Sergels Torg is beautiful when lit up | © Giuseppe Milo / Flickr.

The square is famous partly for the many events that have taken place there, as well as for some interesting architectural quirks. It is also home to one of Stockholm’s most culturally significant buildings, The Culture House.

The city went through a period of revamping starting in the 1950s, as it looked to modernise. This included creating and then expanding the metro system, erecting new buildings, as well as demolishing older ones. The city began to make space for, and then constructed, the square during the 1960s. When the decision was made to create the square, there were a lot of ideas. When combined, they created a number of interesting features. 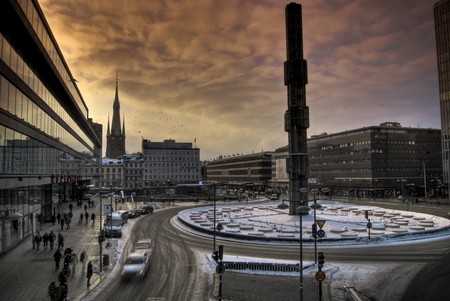 What makes it special

The square also features a roundabout on the traffic level, which has a fountain with a stunning glass obelisk at its centre, as well as distinctive triangular patterns on the floor of the pedestrian section. 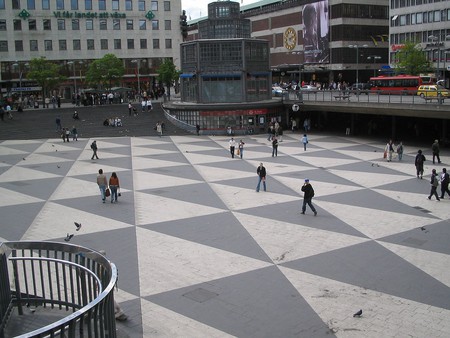 The triangular patter on the floor is iconic | © Jonas Bergsten / WikiCommons.

In their detailed history of the square, two writers, Gay Morris and William Sauter, note that, when it was first conceived, the city wanted it to be used for city-organised events and celebrations. For many years though it was unable to fulfill this function regularly, with many demonstrations against the city taking place there, as well as a number of local ‘celebrities’ using the square to perform or advertise a cause. 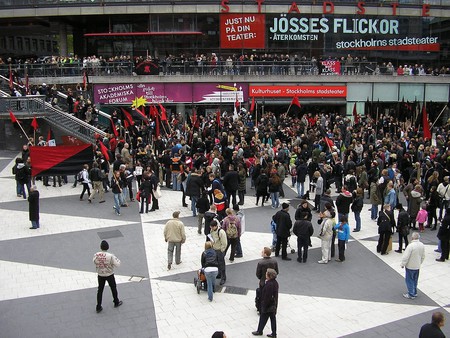 There have been many demonstrations in the square | © Liftarn / WikiCommons.

A famous face in Sergels Torg

Morris and Sauter note that an elderly woman called Maria would come to the square every day for about thirty years, to play the organ and sing. Unfortunately her talent did not match her confidence. She was featured in newspapers and became an attraction known across Sweden.

These kinds of figures and events are what make places like Sergels Torg both important and legendary within cities. These public spaces become the nerve centres of the city, places where both planned and spontaneous events can capture people’s imagination. Like Trafalgar Square in London or Times Square in New York, Sergels Torg is a place to measure Stockholm’s pulse. 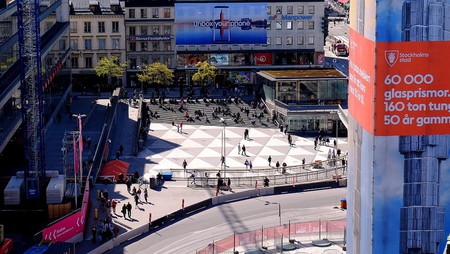 They are currently doing work on the square | © Peter Fristedt / Flickr.

As with many cities, it is a bit of a mish-mash, with different elements catching the eye every time you visit. It is not one of Stockholm’s most beautiful locations, but it is certainly one of the city’s most important.