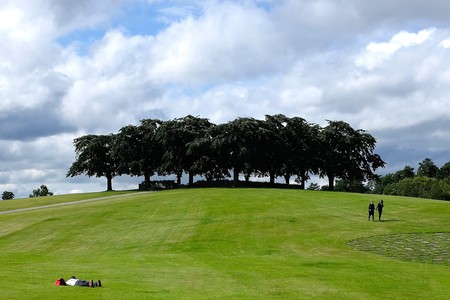 The Stockholm subway, with over 90 stations adorned with beautiful artwork, is a fantastic way to see the city on a budget. A great place to start is on the Green Line, which begins west of the city centre in Hasselby and goes through the centre, before finishing in the south of the city. The beauty of this route is its variety. Among its many stops are places with a castle, a beach, a UNESCO World Heritage Site, a beautiful island, as well as the bustling city centre. It is a fairly long line though, so here are eleven varied and interesting places to hop off and enjoy the sights.

The Green Line’s first (or last) stop, Hasselby strand is particularly notable for two reasons. Firstly, for its proximity to Grimstaskogen Nature Reserve, which is set on the banks of Lake Mälaren. It is a huge and lovely outdoor area to explore, with panoramic views of the lake. Secondly, its outdoor swimming area has visitors flocking there when the sun is out and you can swim out into the lake and see a number of small islands. Hasselby is a brilliant summer spot. 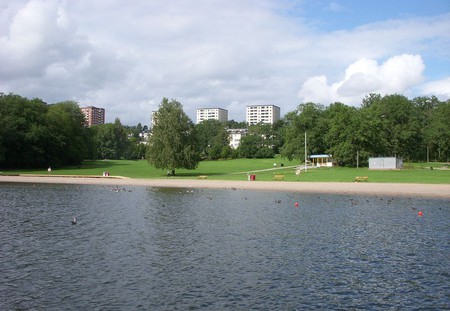 Ängby provides you with a number of good reasons to stop and look around. It has a castle which, despite being quite small, is well worth visiting and is now used for events and parties. The station is on the edge of the Judarskogens Naturreservat, the first nature reserve in Stockholm. This has a number of paths to walk down, birds to see and even a small lake with different kinds of fish. Also right by the station is Astrids, a popular restaurant that serves a range of Swedish dishes. 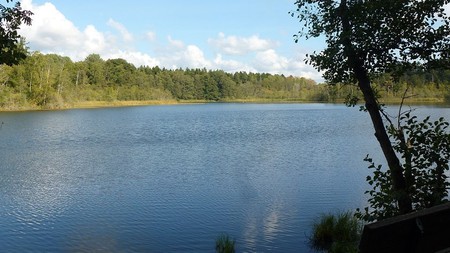 A wonderfully calm and relaxing place that is known for its green spaces and charming castle. The T-bana station is right next to an arboretum full of beautiful trees and walking paths. The castle is set in its own small park and is now a hotel with a bar, a sauna and an excellent restaurant. Åkeshov is only 20 minutes from the central station but going there feels like stepping back in time and out of the hustle and bustle of central Stockholm. 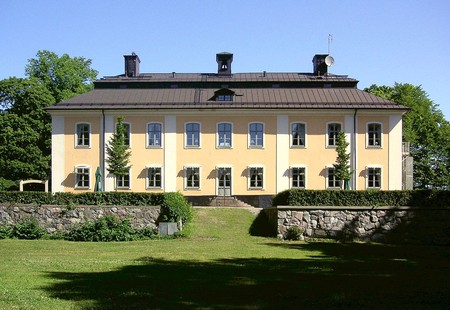 Thorildsplan is sandwiched between two of Stockholm’s best parks and is great if you’re looking for somewhere to soak up some sun, run around or just relax. Fredhällsparken is the smaller of the two parks and is perhaps best known for the sculpture Kjolen by Anita Brusewitz-Hansson. The other park, Rålambshovsparken, is often full of people playing football, volleyball and other sports during the summer. It even has a boules bar that serves French food and drinks. It extends down to the edge of the Riddarfjarden Bay and has stunning views of the City Hall and Gamla Stan.

A central stop with plenty of lively bars and restaurants to grab food in, Sankt Eriksplan is in Vasastan, one of Stockholm’s most charming and leafy central neighbourhoods. Vasa Park, Sven-Harry’s Art Museum, and Bonniers’ contemporary art gallery are all within walking distance of the station. Vasa Park is one of central Stockholm’s biggest and most impressive parks and in summer is one of the best spots in the city. You can also walk along Sankt Eriksgatan, crossing over the water onto Kungsholmen, another of Stockholm’s lovely islands. 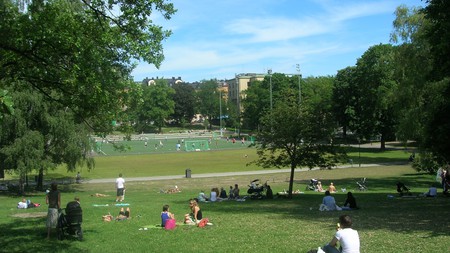 Right in the heart of Stockholm, Slussen is one of the city’s busiest stations and the perfect place to get off if you want to explore Gamla Stan or Södermalm. As it is located between these two islands, it allows you to walk to many of Stockholm’s major attractions, including Medborgarplatsen, the Royal Palace, and Fotografiska art gallery. Outside the main entrance is Nystekt Strömming, a street food van serving some of the best fish in Stockholm. 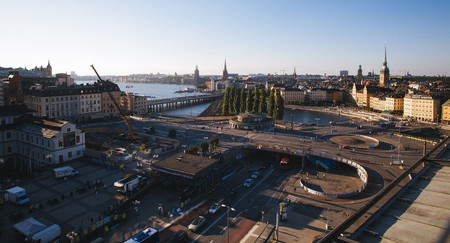 Skanstull is in Södermalm, arguably the coolest part of Stockholm. It’s full of interesting bars, exciting restaurants and excellent nightlife spots. Step out of Skanstull and one of the first things you’ll see is Ringen, a fairly nondescript shopping centre – but inside is Teatern, a food court that is full of an eclectic selection of different restaurants. There is pizza, sushi, fish, vegetarian food, ramen, a snack bar and more. It’s a perfect place to go if you and your friends can’t agree on a place to eat, as there is something for everyone. Also close to the station is Trädgården – a summertime nightclub that is one of the best spots in Stockholm for clubbing. 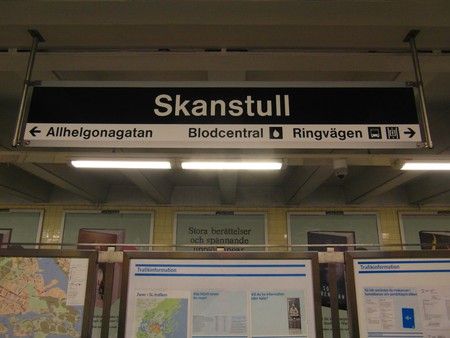 Globen is the perfect place to go to if you want to catch a big event. Both Tele2 Arena and the Ericsson Globe are a stone’s-throw from Globen and they host concerts, football matches, ice hockey games and even speedway. For the bigger events you will need to grab tickets in advance, but if you want to see a football or ice hockey match you can usually buy on the day. Even if there is not an event on, it is worth seeing the Ericsson Globe, which is the world’s largest spherical building. It also has the impressive SkyView , where you ride in a pod-like gondola on the outside of the building up to the top, getting amazing views of Stockholm as you go. 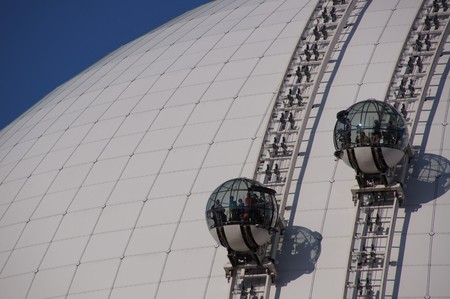 The sky view experience at The Globe | © Fredrik Rubensson / Flickr

Kärrtorp is within the district of Skarpnäck and has a real community feel, with a cosy café called Ma Baker, as well as a local theatre-cum-cinema which acts as a culture hub. Kärrtorp is just 15 minutes from Stockholm’s central station, but when you are there you feel as if you’re in a small town rather than Scandinavia’s largest city. The theatre, called Reflexen, shows a range of films and shows. Visiting Kärrtorp is a great way of seeing how Stockholmers live outside the city centre. 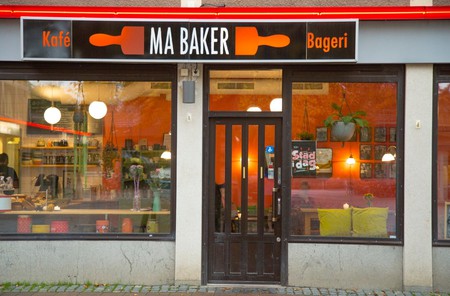 Despite being a very small station, Skogskyrkogården is one of the busier Green Line spots owing to its proximity to The Woodland Cemetery – one of Stockholm’s UNESCO World Heritage Sites. Built in 1915 as the result of an international competition to design and build a new cemetery, it’s a popular attraction, both for the beautiful buildings within the cemetery and for the famous people buried here. The Skogskapellet and Uppstandelsekapellet chapels were designed by two of Sweden’s most noted architects of the 20th century, while actress Greta Garbo and football star Lennart Skoglund are both buried here. 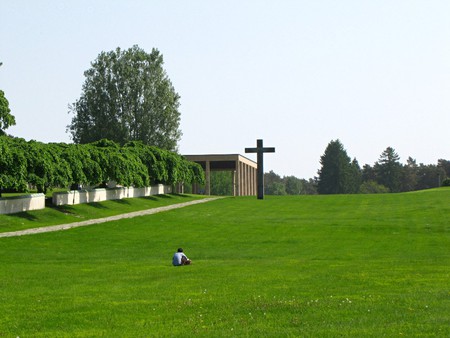 One of the stops right in the south of the city, Farsta strand is home to one of Stockholm’s few and, without a doubt, most impressive Hindu temples. Ganesha Temple is full of beautiful statues and is one of the most welcoming places in Stockholm. Farsta strand is also very close to Magelungen, one of Stockholm’s largest lakes and an area of real beauty. You can walk from the station over the Ågesta Bridge (where you can get wonderful views of the water) and onto Ågesta peninsula, which has an outdoor pool, so you can swim in the lake. 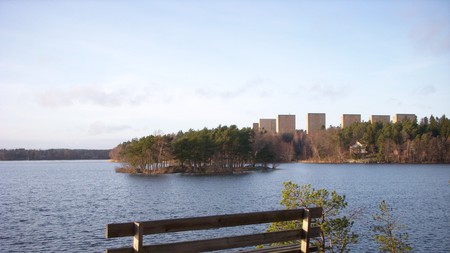