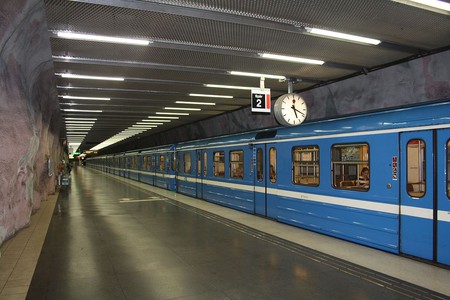 Stockholm is by no means Europe’s largest city. However, there are still myriad things to do and places to see, so when you first arrive in Sweden’s capital, it can be easy to stick to the centre and ignore the rest. While the centre is excellent, there are many wonderful things to do as you move away from the main part of the city.

Luckily, the metro system provides an excellent method of quickly seeing lots of great places in Stockholm, both in the suburbs and in the heart of the city. The red line stretches from Morby Centrum in the north to Norsborg in the southwest. These 11 stops are the perfect places to hop on and off to explore the city, so grab a 24-hour ticket and get going.

The most northern stop on the red line is home to one of Stockholm’s best shopping centres, Morby Centrum. Unlike city centre shops, it is never overwhelmingly busy, but it contains a number of great shops to explore. The metro station is built right into the shopping centre, making it convenient to find. Morby Centrum is also home to Stockholm’s golf club, one of the best value places to play golf in Sweden’s capital. 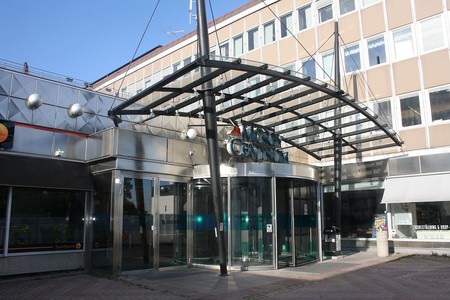 You can can hop off at Universitet, the main station of Stockholm’s illustrious university, to admire all of the university’s main buildings, including its lovely library. It is also walking distance from Stockholm Botanical Gardens which, in the summer, are one of the most beautiful places to visit in all of Stockholm. The Edvard Anderson greenhouse is open year-round and is well worth exploring. Also very close to Universitet is the Museum of Natural History, which features many exciting exhibitions and interesting installations, such as its interactive climate zone. 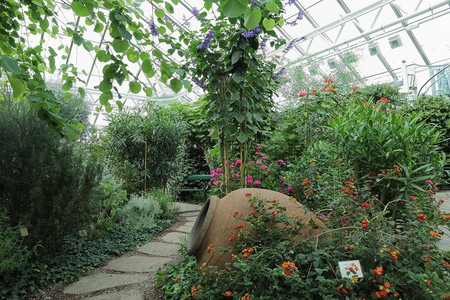 When you walk out of Karlaplan metro station, you emerge right in the centre of the open-plan plaza area that the station is named after. It is a lovely spot in summer where you can take a book and sit by the fountain, basking in the sun and watching the world go by. Famous writer August Strindberg was enamoured enough with the area to live here for seven years. It is one of the most exclusive and expensive parts of town to live in. 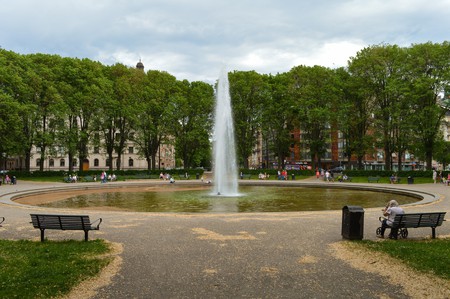 The stunning fountain in the centre of Karlaplan | © Francisco Anzola / Flickr

Östermalmstorg is the beating heart of Stockholm’s most glamorous and beautiful neighbourhood, Östermalm. The area features a number of Michelin-starred restaurants, Östermalm food hall, which has been delighting visitors since the 1880s and a number of charming boutique stores that sell some of Stockholm’s finest goods. If you want to experience where Stockholmers who live for luxury spend their time, Östermalm is the perfect part of town to explore. 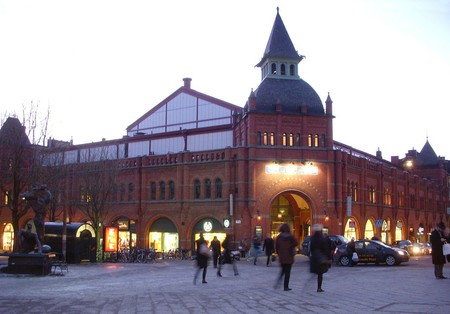 After Östermalmstorg, the metro stops at four of the busiest stations on the Stockholm metro: T-centralen, Gamla Stan, Slussen and Medborgarplatsen. After passing these hubs, it begins to move to the west of the city, and one of the first westerly stops is Mariatorget, which is on the hip island of Södermalm. Mariatorget is a square surrounded by great coffee shops and fashionable restaurants and contains Hotel Rival, which is part-owned by Benny from Abba. 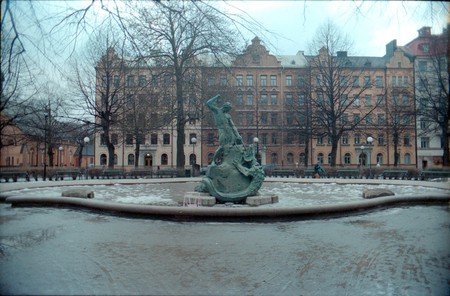 The statue at the centre of Mariatorget | © One Trick Pony / Flickr

Moving slightly further to the west but staying on Södermalm, Zinkensdamm is right at the top of a street called Kurkmansgatan, which features some of Stockholm’s coolest shops and cafés. There is Papercut, a magazine shop with some superb local magazines on sale, Uniforms for the Dedicated, an excellent clothes shop, and Rama, a lovely Indian restaurant. If shopping isn’t your thing, you can catch the unusual Swedish sport bandy at Zinkensdamm IP, a classic old stadium that also hosts athletics in the summer. 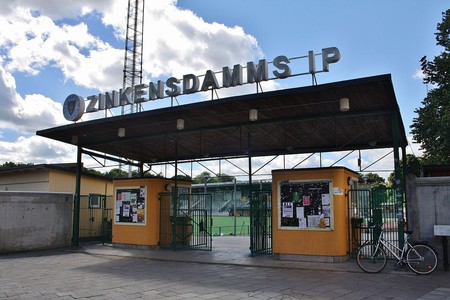 Just one stop further down is Hornstull, which features one of Stockholm’s best and most innovative cinemas, Bio Rio. Bio Rio has been showing films to Stockholmers since 1943 and now has it down to an art. It is beautiful inside and out and offers a range of exciting events for film lovers. They have film frukost, where you eat breakfast before watching a film, a bistro that serves lovely food and singalong specials, where you can interact with your favourite films. 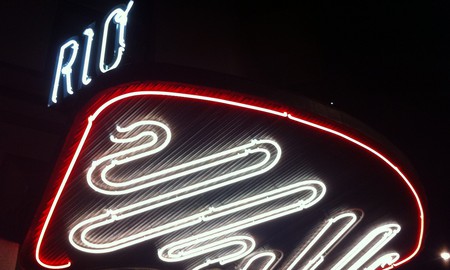 As with many cities, the hipster hotspot in Stockholm is constantly moving. Various parts of Södermalm held the crown for a long time, but everyone’s current favourite spot is the suburb of Midsommarkransen. As prices rose in Södermalm and drove people out, Midsommarkransen has become full of creatives and young professionals. This has meant a number of very cool shops and restaurants have sprung up in the area, as well as injecting new life into older places like Biocafe Tellus, the wonderful cinema café that has been there since the 1920s. 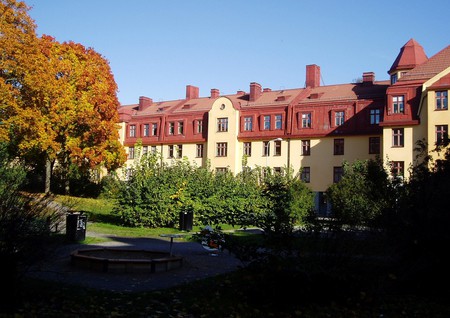 Named after Malaren Lake that surrounds the city of Stockholm, Malaren is the perfect place to hop off if you want to explore some of the smaller islands dotted around Sweden’s capital. You can get off at Malarhojden before making the short walk to Fridhem Brygga, from which ferries go to a number of small islands, including Drottningholm, where the stunning royal palace is located. If boats aren’t your thing, Malarhojden also features Opera Light, a performing art theatre that puts on a range of entertaining operas. 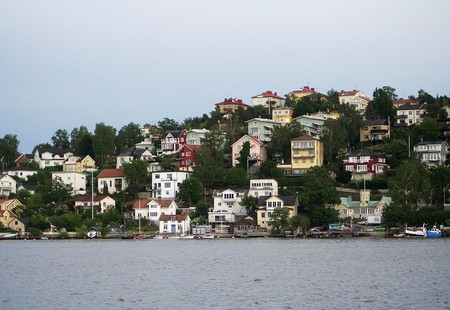 Alby is located close to two of Stockholm’s most unique and interesting arts experiences: Subtopia and Cirkus Cirkor, which are a quick walk from the subway station. Subtopia is an events space that hosts some incredible performances, ranging from dance camps to outdoor art to sewing machine music. It has an outdoor wall that features street art from artists from across the world. Cirkus Cirkor is devoted to bringing world-class circus performance to Sweden and has performances as well as courses for anyone who wants to try their hand at circus skills. 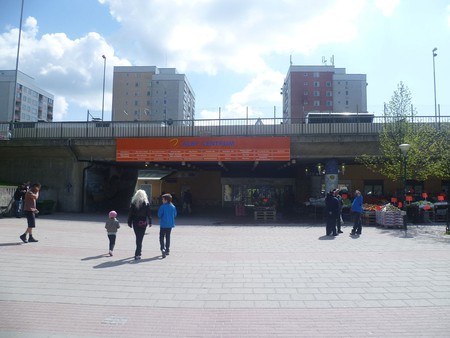 The centre of Alby | © Adville / WikiCommons

At one point, the red line splits into two, with Liljeholmen, the stop after Hornstull, being the splitting point. It then becomes the T13, which goes right down into the south, and T14 which doesn’t go so far south. Fruangen is the last stop on the T14 and is best known for the fact that the streets around the station are all named after famous Swedish women, including Jenny Lind, feminist writer Ellen Key and painted Hanna Pauli. If that’s not enough to get you there, there is also Langbro Park, a stunning green space that is the perfect summer spot, as it is usually quieter than the city centre parks. It features classic early 20th-century buildings that have been left unmodernised. 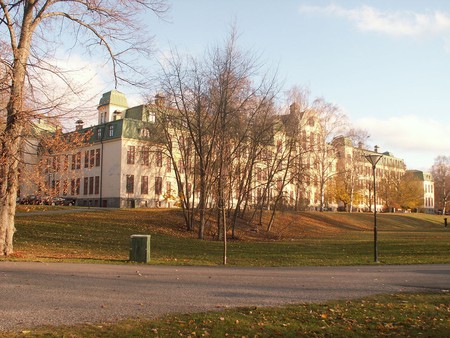