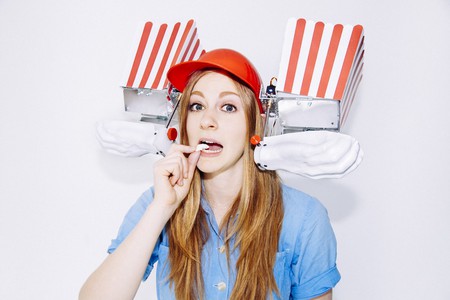 The smart and funny Simone got her start in her home country of Sweden, where she briefly studied engineering physics before studying at Stockholm’s legendary Hyper Island, where her interest in programming—and more importantly, robotics—was born. It was in 2013 when she first got interested in electronica, leading her to build a toothbrush helmet for the pilot episode for a children’s T.V. show about electronics. When she uploaded the pilot to YouTube a star was more or less born. So how did Simone get started in this more or less completely invented career?

“I wanted to learn about electronics and realized it was more fun to build useless things,” Simone says. “Some Internet and a teaspoon of flukes later I had made myself a job. My job is definitely my best invention so far. I mostly build robots that don’t work. And have a lot of fun doing it.” 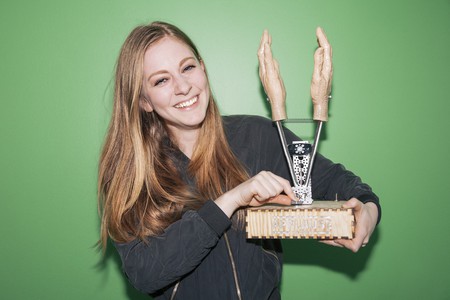 The Queen of Shitty Robots | Courtesy of Simone Giertz

While her robots might be shitty, they’ve attracted her plenty of attention. The robots work, sort of, but they’re also pretty useless. No one seems to care because they’re fun, interesting, and her presentation of her work is hilarious. In fact, her comically flat delivery, thrilling use of every curse word under the sun, and some pretty bizarre inventions all add up to a young woman with one of the more unique minds of our time.

Her popularity has grown so much that she’s been featured on the Ellen DeGeneres Show in the U.S., as well as on Colbert, spoken at various stellar events, and had her brain picked by some of the great institutions of our time. She’s also a descendant of Lars Magnus Ericsson, the founder of telecoms giant Ericsson. 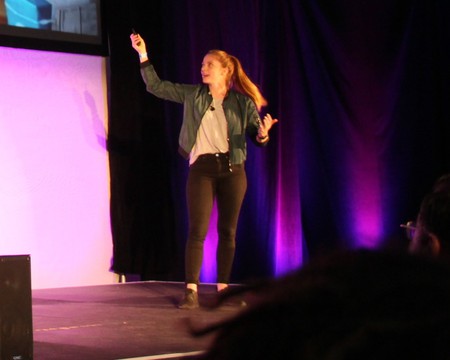 Now, about those inventions: among them you’ll find a lipstick applier, an alarm clock that a slaps you awake (literally), a robotic hand clapper, and the Breakfast Machine, that continually tries to pour milk into a bowl of cereal—unsuccessfully.

But building shitty robots isn’t the only thing Giertz does. She joined tested.com in 2016, and began collaborating on the Popcorn Feeding Helmet. She also hosted the Swedish comedy show Manick in 2017, where she invented funny and creative solutions to everyday problems, and while a teenage exchange student in China, she appeared on a Chinese sitcom as a Canadian girl married to a Chinese man.

Giertz says that her biggest accomplishment is the mental switch she made when she first started creating and making. “I used to be very duty-driven and believe that only things that were very hard were important. But then I lost my job as an editor, and was like ‘I’ll try and only do things I think are fun from now on.’ Turns out I’m much better at things that I enjoy than things I find boring.”

Her biggest dream is to go into space and she says she’s pretty sure she’ll peak when she turns 47. That’s more than twenty years from now so we can be assured of at least two more decades of this incredible mind bringing us things to think about—and laugh at.

Did we mention she likes to swear? This video is most definitely NSFW.