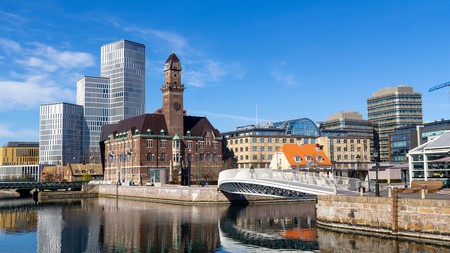 It may seem counterintuitive for a restaurant to put itself out of business, but for SPILL, the zero-waste, Malmö-based restaurant, it’s an integral part of the business plan.

Currently, in Europe, 88m tonnes of produce is wasted annually, and in Sweden, it often works out cheaper to overproduce and dispose of the surplus than have an order rejected by a buyer. Spurred on by those statistics, the owners of Malmö’s sustainable restaurant SPILL, Erik Andersson and Ellinor Lindblom, set up a small lunch-only spot devised out of a need to find a way to make use of the mass of produce wasted every day. SPILL buys surplus food directly from suppliers to turn into delicious meals, thereby highlighting the volume of waste to its customers.

Andersson and Lindblom aim to change public perception and, more crucially, governmental policy within five years of opening so that there’s no longer a surplus to work with. As Andersson says, “If we don’t have any food waste, we don’t have a restaurant.”

The concept came about just over two years ago when Andersson left his job at Swedish restaurant Daniel Berlin in Skåne-Tranås, in search of something new.

“I wanted to take a break, so I took two months off. I didn’t know what I wanted to do or if I even wanted to continue [in food],” says Andersson. “I visited a supplier to tell them I was taking a break, and they showed me around. It was here that I saw a trolly in the corner that was really poorly packed. I asked ‘Who’s this for?’ because I knew no restaurant would accept it – every chef wants it organised. They said, ‘No no, it’s going to trash.’ Then it hit me just how much gets thrown away by suppliers and supermarkets. I started to book meetings with all suppliers, and I saw the same at every one.”

Andersson says, “For two to three weeks, we developed a plan: What should we do about this? What could we do about this? What sort of restaurant could we create to cook as much food as possible and show as many people as possible about food waste? A lunch restaurant was the best way to do it. As we get a lot of the same produce, you can make more with it and serve more people with lunch than dinner. There’s a higher turnover.”

Unlike other restaurants working with sustainable produce, SPILL is unable to forecast menus based off of what’s seasonal. Andersson explains that this is because they’re working with all sorts of suppliers, big and small. “Sometimes we get asparagus from South America, and sometimes we get carrots from a small farm just outside of Malmö. We get all sorts of varieties. This means we’re setting the menu by the day. On a Monday morning, we’re working out what we’re going to have for Tuesday lunch.”

Working in this way requires a lot of creativity – and occasionally, items have to be bought separately. “Sometimes I have 15 kilos of beetroot, but I need three more for service,” says Andersson. For those curious about what percentage of the meal is from surplus, the SPILL website gives a daily reading. It’s typically over 90 percent, which indicates just how much food is being wasted without initiatives like this to challenge it.

Andersson moved to Malmö 10 years ago and has found this small but friendly town the ideal spot for such a pioneering restaurant. “The Malmö people are curious. They want to find out more and try new things. We’ve had a good response to what we’re doing.” The restaurant’s popularity is evident, as SPILL prepares to celebrate its second anniversary in May 2020.

“Malmö is a cultured and nice town; the people are very kind. It’s a city where you can ride a bike almost everywhere, and we also have a nice long beach. There are plenty of pubs and clubs, so there’s a good drinking culture, lots of beer and wine, plus a few cocktail bars that are really good. But beyond that, we have a lot of restaurants, and they’re really high quality.”

“Some of the restaurants in Malmö are also part of this eco-conscious food scene, doing their own sustainability; they take care of their business and their food,” says Andersson. “They don’t throw that much away as it costs money to waste food in a restaurant. They’re all doing sustainability in their own way.”

It may seem strange to wish such a fantastic restaurant out of existence, but with such a compelling reason as SPILL’s, you find yourself hoping the owners will achieve their goal of planned obsoletion. Andersson seems hopeful that this will be the case.