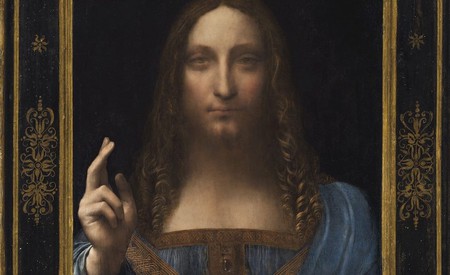 Did you think you weren’t going to hear any more about Leonardo da Vinci’s Salvator Mundi? Well, think again, because none other than IKEA is on the case!

The 500-year-old painting, which sold for a record $450.3 million (£341m) at Christie’s last week, has been all over the news for obvious reasons. After all, it’s a long-lost masterpiece, it’s one of a very few paintings by Leonardo da Vinci known to exist, the most expensive painting ever sold, the list goes on…

But most recently your favourite Swedish furniture brand has elevated the work to comic gold with an absolutely genius new marketing campaign. The advert displays the practically priceless painting on display in one of the company’s $9.99 (£7.49) Virserum gold frames, with the strapline: ‘When you spend $450 million on a painting but don’t like the frame.’

This is probably the definition of branding goals.

IKEA goes on to comment in the press release that the sale price of the portrait of Jesus Christ comes to just ‘slightly more than 15 million Billy Bookcases,’ referring to one of their most iconic homeware products.

In closing, Morten Kjaer, the Creative Director at IKEA Creative Hub, said: ‘At IKEA, we believe anyone should have the possibility to decorate their home without spending their life savings. That’s why IKEA offers a range of frames that work with any photo, print or painting you want to show off, even those from the 1490s.’

There really are no words, just yes.