Explore Stockholm Through An Ocean Bus 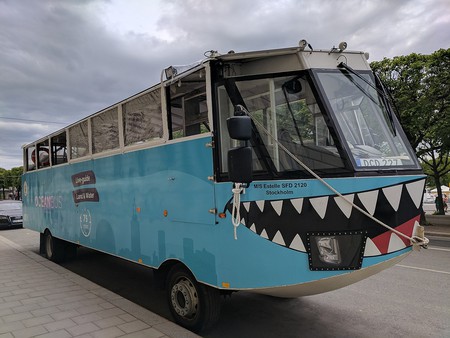 Stockholm as a city only really exists because of the water that surrounds it. Before the middle of the 13th century, Stockholm was barely a town, never mind Sweden’s largest city. There were a number of places, including Uppsala, Vasteras and Sigtuna, that were far larger and more significant than Stockholm.

Stockholm and the water, a symbiotic relationship

However, Stockholm, because of its location on Lake Malaren and the Baltic Sea, proved to be in a very useful spot for trading and repelling invaders, and therefore an ideal location for people to settle in. Which is why, in 1252, led by the great general Birger Jarlsgatan, a city was established on the island of Gamla Stan, which grew and grew. Since then, the water around Stockholm has served a variety of purposes.

It has been an important way of moving and transporting things (be it people or goods), it has provided places for people to swim and bathe and more recently, it has served as a tourist attraction for visitors to explore and gain a new perspective. Boat tours allow for spectacular views of the city to more quickly get from point to point as well as to see places that otherwise might be inaccessible. 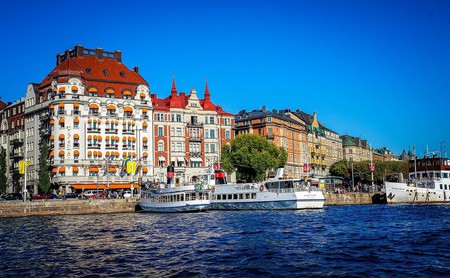 However, of course, there are some parts of the city where boats cannot go, so while you might be able to get to the various islands that make up Stockholm quicker, once you are there, you cannot explore the various exciting buildings and cosy streets that make up the city if you are floating on the water.

Ocean bus: All the essentials covered

That is where Stockholm’s very own ocean bus comes in, a great idea that combines the freedom and sense of adventure you can only get on a boat with a chance to see all the amazing landlocked sights that make Stockholm so special. Each bus even has its own live guide to give you all the information you need about what you are seeing.

It is particularly perfect if you are strapped for time. Rather than having to choose between the water and the land, the ocean bus manages to give you both. There is nothing quite like cruising through the streets of Stockholm before sailing on the sea – without ever having to leave your seat. It is the best of both worlds and the ideal way to see the city if you are only there for a short period of time. 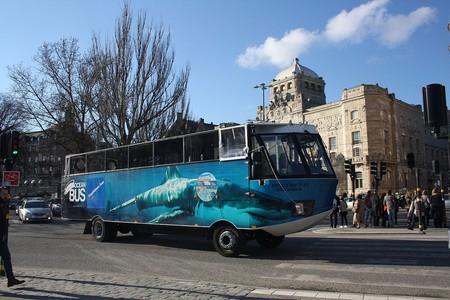 Even if you are in Stockholm for a good amount of time, it is still worth trying this unique way of seeing the city. It covers all of the major spots in Sweden’s capital, offering a whistle-stop tour of everything you have to have ticked off your list before leaving the city.

It begins at Kungstradgarden, a lovely and charming park right in the centre of the city, on the northern island of Norrmalm. You begin by road and take in the Royal Opera house, beautiful Stureplan, Humlegarden and Kaplan.

All of these places are in Ostermalm, one of the city’s most upmarket areas. The bus then drives down and past Diplomatstaden, the part of Ostermalm where many of the embassies and the most expensive properties in the city are located, before hitting the water and turning into a boat. 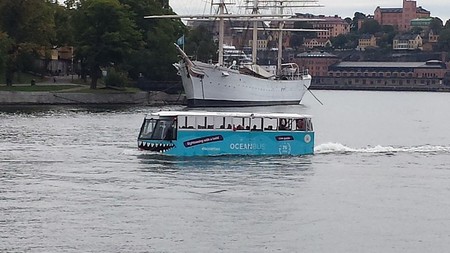 Each bus has its own live guide | © Chris Wood / WikiCommons

You then sail round a number of excellent attractions, including the Vasa museum, the children’s museum Junibacken, the island of Djurgarden and Grona Lund, Stockholm’s premier theme park.

All of these things look lovely from the water, as does Kastellholmen, a tiny island right in the centre of the city that features a 17th-century castle that helped warn Stockholmers of any prospective invaders and acted as the first line of defence.

Having passed Kastellholmen, the tour continues, this time passing right between the old town Gamla Stan and Skeppsholmen, two islands featuring a number of important things to look at, ranging from the Modern Museum on Skeppsholmen to the Royal Palace on Gamla Stan. Seeing these sights from the water provides a new way of looking at them as well as giving you great views of both islands. 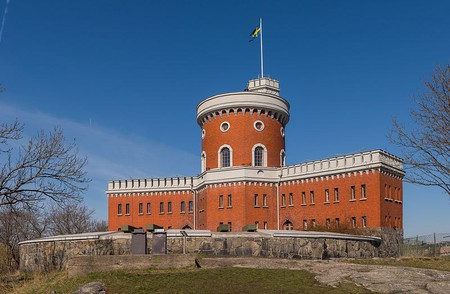 It is the perfect way to round off a trip that acts as a superb introduction to the city’s many charms and attractions. It takes 75 minutes, which is the ideal amount of time, long enough to see lots of great things but not so long that it is overwhelming.

Whether you are looking for a quick way to tick off all the major things to see in Stockholm or hoping for a new perspective on this beautiful city, the ocean bus is a great way to do it.