You Can Still Ride One of Stockholm’s Old Streetcars 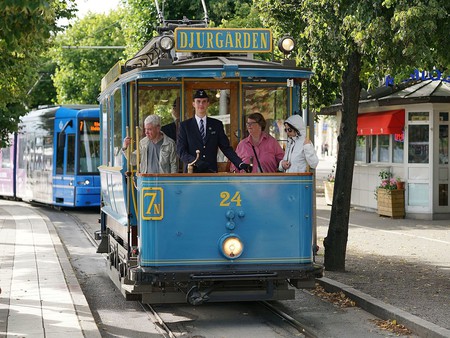 It is always jarring the first time you visit a country that drives to the opposite side of the road to your own. You can always spot a tourist in London by the fact that, whenever they are at a crossing, they always look deep in thought before checking both ways. For Swedes in 1967, they encountered this issue in their own country when Dagen H arrived.

Before 1967, Sweden was a country which drove on the left hand side, that was the way things had always been done and it seemed the sensible way to do things. However, it started to become more and more impractical, as people began to drive more to neighbouring countries (which drove on the right) and because 90 percent of cars were left hand drive, as many Swedish cars were imported from the United States.

Thus the Swedish parliament decided in 1963 that they would switch to driving on the right hand side by 1967. That decision was implemented on H day, short for Hogertrafik (which means right traffic) day, on the September 3, 1967. 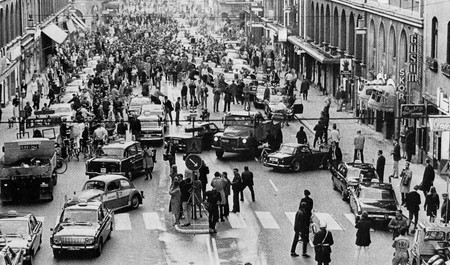 The end of trams

This spelled the end for the vast majority of Stockholm’s trams, as the city decided that they should use buses instead. For many in Stockholm, this was a sad day as the trams had been a buzzing and interesting mode of transport. The city had also long been planning to reduce the amount of trams, in favour of expanding their metro system.

Trams then, for a long time, became a distant memory for most Stockholmers, much to the chagrin of older residents, who had made many great memories while hopping on trams across the city. There is something very charming about trams and many Stockholmers were envious of the fact that Gothenburg got to keep its trams — even though that came at great government expense and means there remains no metro system in Gothenburg.

Trams, back in style

Twenty four years after Dagen H, a group of Stockholmers decided that they wanted to have the trams back. They decided that they would run their own tram line with restored tram cars. The Swedish Tramway society, in order to make the tram as beneficial, inexpensive and useful as possible for its users, elected to have it running on a not for profit basis. 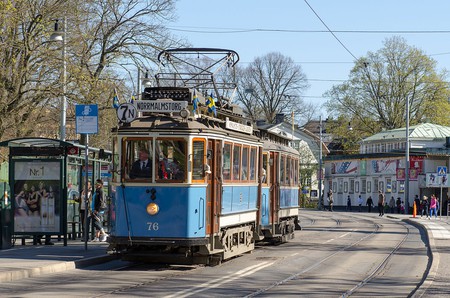 The Djurgarden line is much loved in Stockholm | © ArildV / WikiCommons.

They set it up on the beautiful island of Djurgarden, which has a number of popular tourist attractions, as well as a beautiful park with cafes and restaurants — which are always full during the summer months. They called it the Djurgarden line. The City felt that this was an inspired idea and decided to get involved by helping with the infrastructure but it remains run by a group of committed volunteers, from drivers to mechanics to conductors. People are involved because of their love of trams.

The line was a total hit and attracted both visitors and residents, who began to use it as a way of getting around as well as commuting to work. In 2005, the city’s main transport body, SL, decided that the line had been successful enough that it should become part of the city’s transport network. It is now treated as part of Stockholm’s public transport system and therefore you can use SL tickets and travel cards on the tram.

In fact, it was so popular that it caused many people to begin arguing that they should seek to extend the line and bring back more trams. In 2010, the city decided that this was a good idea, and extended the Djurgarden line so that it goes right into the heart of the city. 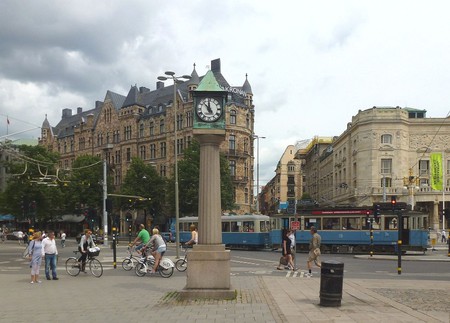 The tram now goes into the heart of the city | © Holger.Ellgaard / WikiCommons.

It has managed to straddle the line perfectly between something loved by tourists and locals and it has given the city something back that it lost that day in 1967. It has different running times depending on the time of year. Between December and March it doesn’t run but from March 30 to June 24 it is on weekends and holidays, from June 25 to August 24 it is everyday except Mondays and then from September 1 to December 16 it goes back to being only weekends and holidays.

Special experiences on the tram

There are also a range of special experiences on offer on the trams. You can charter your own tram and take it anywhere where tracks exist, you can eat in their fabulous restaurant car and you can hop on Tram number 618 on the weekends and enjoy their Cafe Tram. The Cafe Tram is famous across the city for being one of the most unique and delightful experiences you can have. 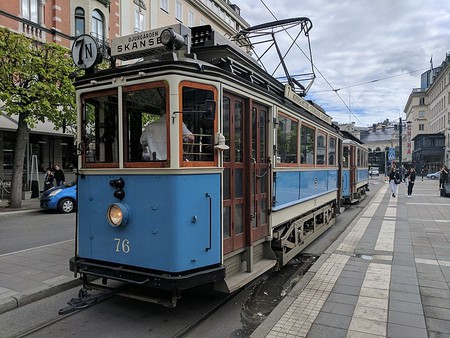 The trams are of various different ages and types | © AleWi / WikiCommons.

The Djurgarden line is a real testament to what people who are passionate and committed can achieve. As it says on their website, ‘appreciation spurs them [the volunteers] on!’ The line is run by those who love the trams and the joy they provide other people. If you are in Stockholm when it is running make sure to take a ride and to let the volunteers know what a wonderful thing they have done for the city.