An Introvert's Guide to Sweden 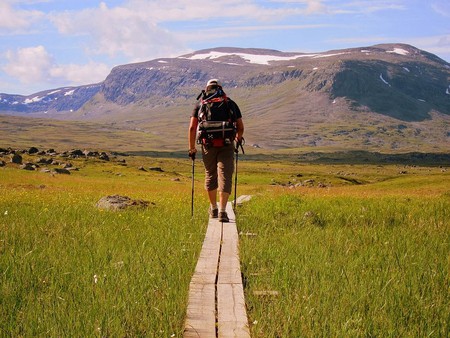 For introverts, Sweden might be the ideal destination. It has been named the 8th best country in the world to visit solo, and of course we have Greta Garbo’s alleged comment, ‘I want to be alone’ to tell us all we need about Swedes and solitude. Here’s the thing: Swedes are not overly gregarious, even when they’ve knocked back a few – so if you’re quietly sipping a drink while contemplating the world, it’s rare indeed that anyone would try to drag you into one of those lively bar debates. People respect one another’s space, meaning you’ll have no problem just doing your thing. Here’s your introvert’s guide to Sweden. 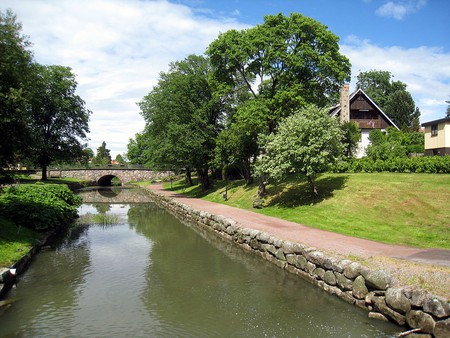 In small towns and big cities, there are hundreds of museums spread across Sweden, catering to nearly every taste. If you’re in Stockholm, check out Fotografiska for some world class photography, before taking some time in the top floor café to enjoy a fika while appreciating the fantastic views. Alternatively, head to Hallwyska Museet, one of the city’s great hidden gems, where you can see how the 1% lived at the turn of the century. 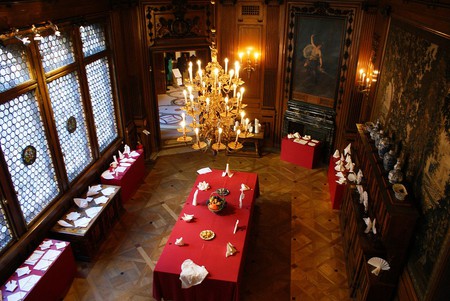 Down in Skåne Cineteket in Ystad is a museum dedicated to the character of Kurt Wallander. You can see film presentations, make your own animations, try trick filming, and – if you’re feeling like some human contact – meet some of the people behind the films. That Ystad itself is charming and ripe for exploration (and not yet overrun by tourists) makes this a double recommendation. 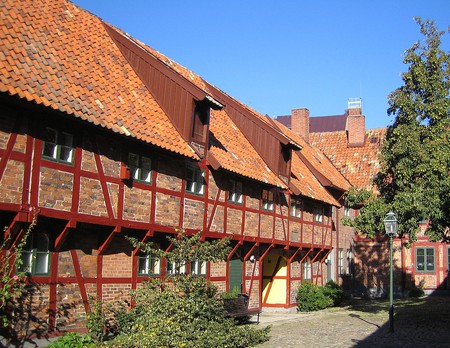 Enjoy all Ystad has to offer / Photo courtesy of Wikipedia Commons

If you’re a film buff try Stockholm Filmhuset, located in the home of the Swedish Film Institute. Two cinemas screen special series, such as the recent Greta Garbo tribute, obscure international films that never made it of the festival circuit and classics that haven’t been seen on the big screen since they first premiered. This isn’t a popcorn house, it’s a place for true film lovers – and after you’ve spent a few hours being transported to another world in the darkness of the cinema, head over to the wide open spaces of Gärdet, just over the road. Paths wend through the windswept fields, giving you a chance to catch your breath. 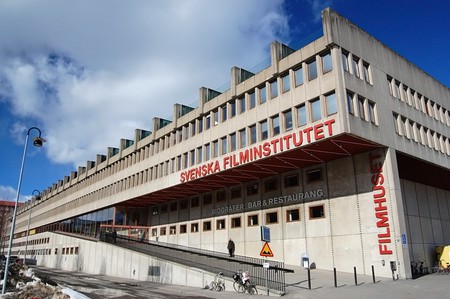 If you’re into more remote areas, head to the wilds of Northern Dalsland, where Not Quite operates from an old factory, with artists, designers and craftspeople working away from the influences of the big city. While the space itself is a hotbed of activity, its location means you can step out and breathe in the fresh Nordic air while enjoying that all important alone time. After all, some of Sweden’s most innovative artists have chosen to forego the city for the remoteness of the area, so they should know the importance of getting away from it all.

Speaking of getting away from the big cities, Sweden is covered in wide swathes of unspoiled nature, and enjoying it without disturbance is something Swedes not only respect but regularly do themselves. Sweden’s ‘right to public access’ law means you can pitch a tent more or less anywhere, as long as you follow the ‘do not disturb or destroy’ rule. This means you can roam where you want and even pitch a tent anywhere as long as you are not causing undue disturbance to the property of owners or others. It’s a rule dear to the Swedish heart and, as long as you respect the basics, you’ll be left alone for as long as you want. 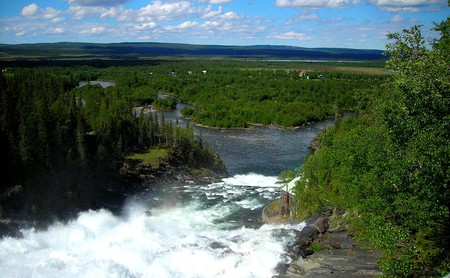 More specifically, Sweden’s High Coast, a UNESCO World Heritage Site, is home to Skuleskogen National Park, known for its natural beauty and quaint villages and towns. For getting away and finding time alone you can’t do much better than spending a few days here. Alternatively, Kungsleden, in Lappland in the far north, features one of Sweden’s finest hiking trails, ripe for some solo exploration. 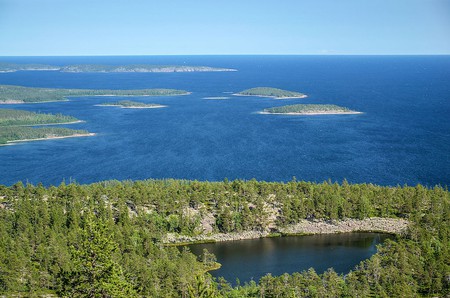 Closer to the cities, pursuits such as berry and mushroom picking are ideal, as well as kayaking or other water sports. In the city itself rent a bike and start peddling – Sweden is committed to its biking schemes and Stockholm, Malmö and Gothenburg all have city bikes that are cheap to rent, with cycle paths snaking through the cities as well as the surrounding countryside. 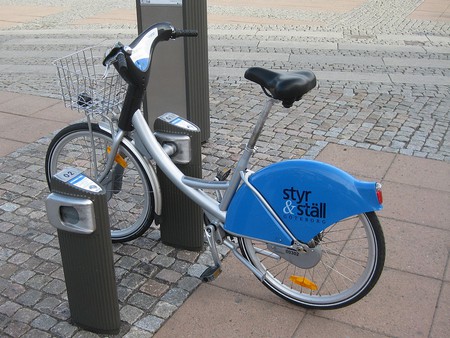 Like all Swedish cities, Gothenburg has an excellent city bike scheme / Photo courtesy of Wikipedia Commons

Eating alone is not frowned upon in Sweden, so no worries about grabbing a table at any restaurant, whether it’s fine dining or a hole in the wall. Some good places to try include Stockholm‘s Sturehof, which during the summer has a great outdoor seating area where you can watch the beautiful people of Stureplan stroll by while enjoying fine seafood. The Grand Hotel is another high-end alternative, with several restaurants that are ideal for solo sitting. The views to the Royal Palace and solicitous, respectful service mean enjoying your meal or just a cup of their own-blend tea is a great way to take a break. 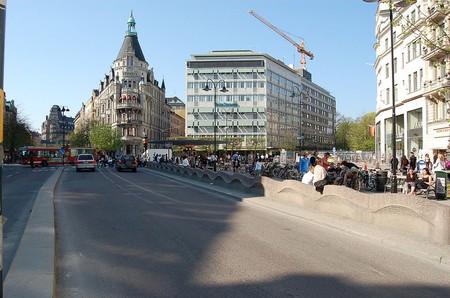 Stureplan: solitude in the midst of the hustle and bustle / Photo courtesy of Wikipedia Commons

If you aren’t interested in restaurant dining, grab something to go from Stockholm’s Hötorgshallen or Malmö’s Saluhallen – these are just two of Sweden’s many markets where you can buy delicious gourmet ready-made meals at reasonable prices. Then head to a local square, grab a seat and sit back and enjoy Swedish or international food. 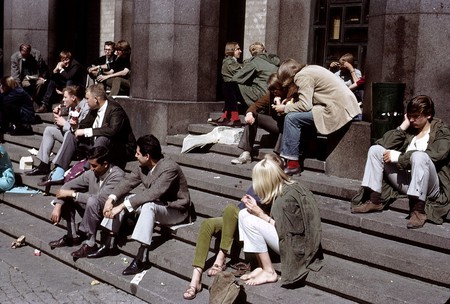 The pub scene in Sweden continues to grow and these British-style watering holes serve traditional pub fare, but they also know how to respect their clientele. Grab a corner table at one and watch the game, read the paper, or catch up on emails (it’s rare to find any establishment in Sweden that doesn’t offer free Wi-fi). 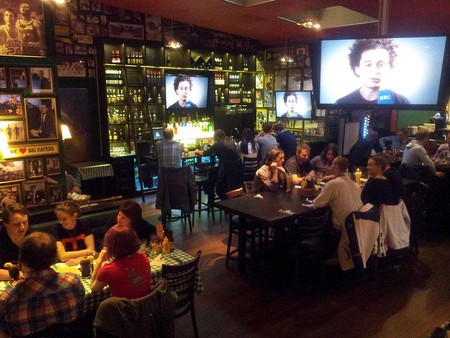 Swedes work out more than anyone else in Europe, with just nine percent saying they never exercise, so getting active is easy. The aforementioned biking or kayaking are both great options, but exercising is as simple as putting one foot in front of another. Sunday is the day where pretty much all Swedes take a long walk, no matter what the weather or where they live, so join the maddening crowds on Djurgården in Stockholm or in Malmö’s Folkets Park. Just beyond any city or town’s borders you’ll find forests and trails, perfect for exploring. You can also swim in one of Sweden’s thousands of lakes, or take a boat out to the many islands that dot both Gothenburg and Stockholm‘s archipelagos, where you can rent a small remote cabin and fish, swim, kayak, sail or simply kick back to your heart’s content. In winter it’s skiing, snowshoeing or skating. 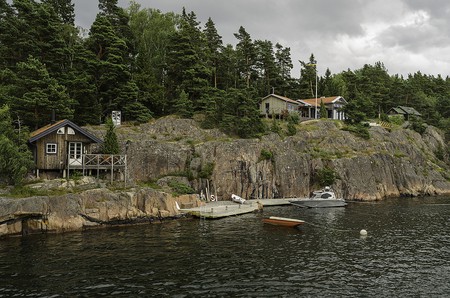 At the end of the day, Sweden is ideal for solo travellers or those who simply want to spend time with themselves. You can mingle with the big city crowds, safe in the knowledge no one will bother you, or make like a Swede and get back to nature. No matter what, you will be drawn to the beauty of this beautiful country, where respect for personal space is paramount, and the people understand your need to be alone.