An Introduction to the Skateboarding Culture in Malmö, Sweden 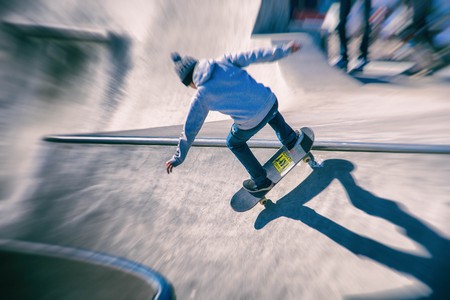 Malmö has a big skateboarding culture – so big in fact, that the city and skateboarders have forged a fairly friendly alliance – and some consider Malmö to one of the best cities for skateboarders in the world. Let’s put it in simpler terms: Malmö has its own skateboarding high school and a skate ambassador in City Hall. That’s how entrenched skateboarding is in the city. 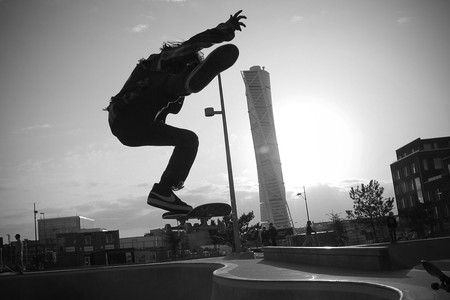 Today Malmö is well known as a ‘skating mecca’, it wasn’t always that way. In the early days, skaters faced less than positive attitudes, a climate that wasn’t always ideal and architecture that wasn’t very skate-friendly. DIY skating was rife but by the 90s skaters started to push back against the constraints – creating a skate organisation in an old garage and laying the groundwork for cooperation with the city.

Development
The skating organisation and cooperation with the city grew quickly and by 1998 skaters were given the building Bryggeriet; which at one point was Europe’s biggest indoor skatepark and quickly began attracting big competitions. While Bryggeriet was still the centre of the scene, skaters began pushing for a new outdoor skate park. The strong relationship between the city and skaters was key in moving plans forward. 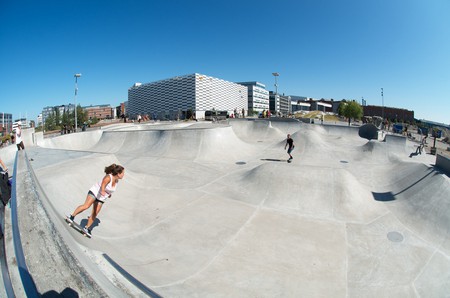 Stapelbäddsparken opened in 2005. Bryggeriet wanted it to be top quality and in the city centre. The City of Malmö saw the value in creating a skate destination and the result was Stapelbäddparken, which is located in an old shipyard. It’s public, it’s free and it has several areas: a bowl landscape, a ‘street’ area and a series of granite benches designed for both separating the footpath and adding to the street area.

The aforementioned Brygggeriet, Stapelbädds and Vans skateparks are the best places if you’re new in town – you’ll make friends, and quickly be brought into the fold. While you can street skate, and there are plenty of non-sanctioned places to skate, it’s good to respect the people around you and remember that Malmö’s skaters and the city have worked long and hard to develop a good relationship based on mutual respect. Bear that in mind when going rogue – but don’t let it stop you from exploring this city, which is filled with challenging nooks and crannies.

Find more places to skate and other information on skateboarding in Malmö here.