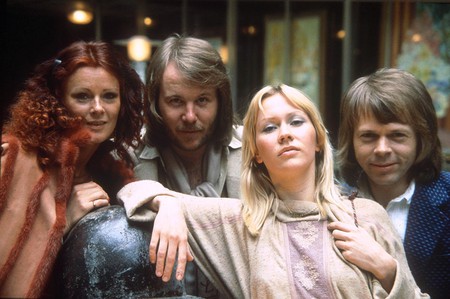 Mamma Mia! Swedish pop band ABBA have returned to the studio to record their first new music since the 1980s.

The quartet announced the surprise news on the band’s official Instagram account, revealing that the new material was an ‘unexpected consequence’ of their recent decision to organise a virtual reality ABBA tour.

They said in a statement: ‘We all four felt that, after some 35 years, it could be fun to join forces again and go into the recording studio. So we did. And it was like time had stood still and that we had only been away on a short holiday. An extremely joyful experience!’

The band have recorded two songs; one of them, called ‘I Still Have Faith In You’, will be performed during a TV special produced by NBC and the BBC, which is scheduled to be aired in December.

They added: ‘We may have come of age, but the song is new. And it feels good.’

No release date has been set for the new songs.

Formed in 1972, ABBA is made up of Björn Ulvaeus, Benny Andersson, Agnetha Fältskog and Anni-Frid Lyngstad.

She said the studio sessions were ‘like old times’ adding: ‘Easy as anything. It didn’t feel weird that they hadn’t been in the studio together for 35 years.’

But Hanser claimed the band would not perform live together – only as holograms in the forthcoming ABBA avatar tour.

She insisted: ‘No, you can not expect them to join forces on stage again. They will not do that.’

The band won the Eurovision Song Contest in 1974 with ‘Waterloo’ and have since sold nearly 400 million singles and albums around the world.