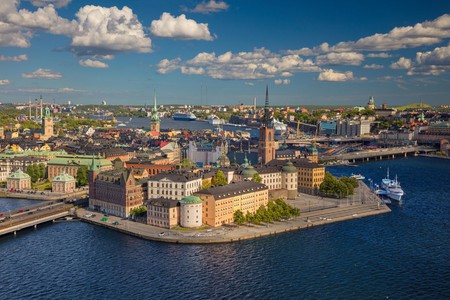 In addition to its historical architecture, Stockholm is home to many modern minimalist classics | © rudi1976 / Alamy Stock Photo

Stockholm – like much of Sweden – is a mixture of grand historical buildings and minimalistic architectural landmarks that perfectly reflect the city’s love of clean, modern lines. These are the most interesting contemporary edifices to look up in the Scandinavian city. 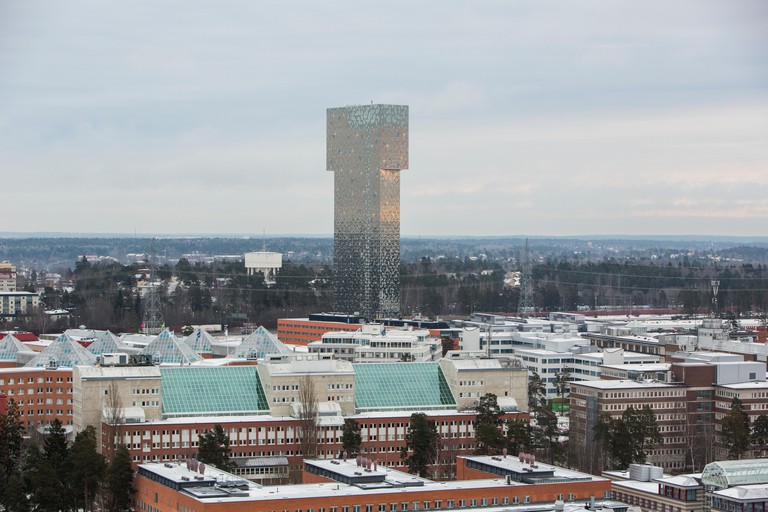 © Michael Folmer / Alamy Stock Photo
Located in the suburb of Kista, Victoria Tower, at 117.6 metres (386 feet) in height, is one of the tallest buildings in Stockholm. It’s wrapped in an irregular arrangement of metal-coloured triangular glass panes, but what makes this tall tower unique is the top-heavy rectangle at the peak. The design won architectural firm Wingårdh Architects the top award at the World Architecture Festival in 2012. Today, it’s home to a Scandic Hotel and a skybar with unparalleled views of Stockholm. 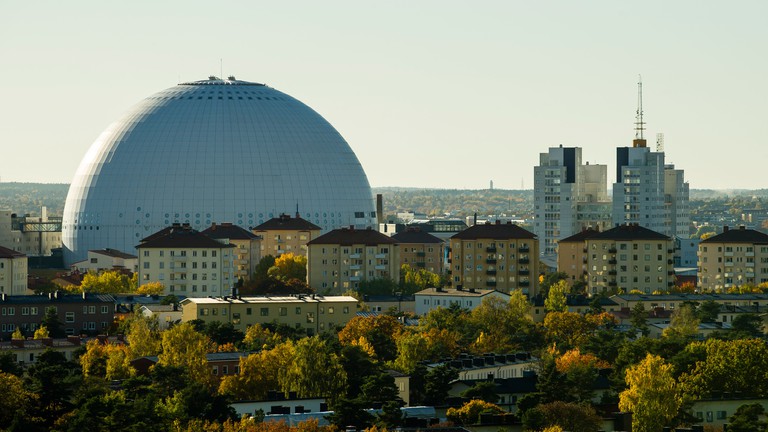 © William Uzuriaga / Alamy Stock Photo
Opened in 1989, Globen (The Globe) is the world’s largest spherical building and has become a symbol on Stockholm’s skyline. The space is home to a number of shops, restaurants, bars and arenas. With a diameter of 110m (361ft) and an inner height of 85m (279ft), the hemispherical building was designed by Berg Arkitektkontor to represent the sun in the Sweden Solar System, the world’s largest solar system scale model.

Architectural Landmark
Facebook
Email
Twitter
Pinterest
Copy link
Share
Located just a stone’s throw from Stockholm Central Station, Stockholm Waterfront raised – and continues to raise – eyebrows when it was unveiled in 2010. It’s safe to say architects White Arkitekter took some bold choices with the three buildings that make up the conference centre, adding moveable interiors and distinctive metal spikes that slice through the Stockholm skyline. The centre is also revolutionary in its energy efficiency. 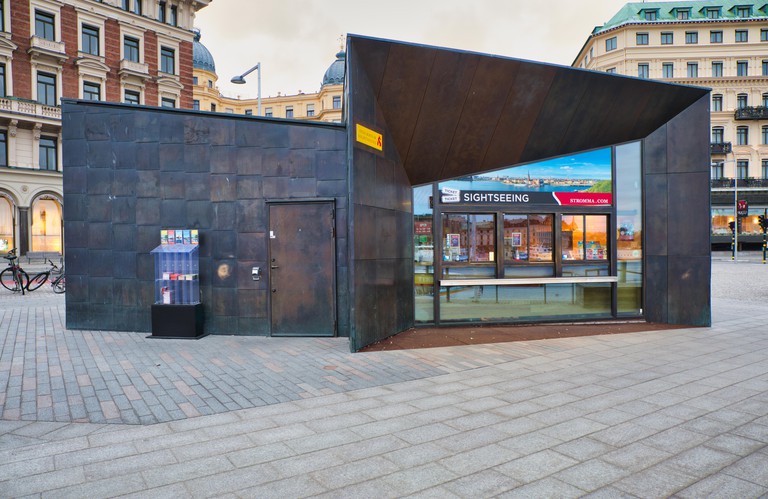 © HelloWorld Images / Alamy Stock Photo
This small structure, designed by award-winning Marge Arkitekter, is the main terminal and information point for ferries heading out to the Stockholm archipelago. The design is simple: three cone-shaped edifices come together in one building and frame different views of the water, with no obvious front or back. The facade was designed using burnished brass alloy, while the interior is made of roughly sawn oak. It’s minimalism at its finest. 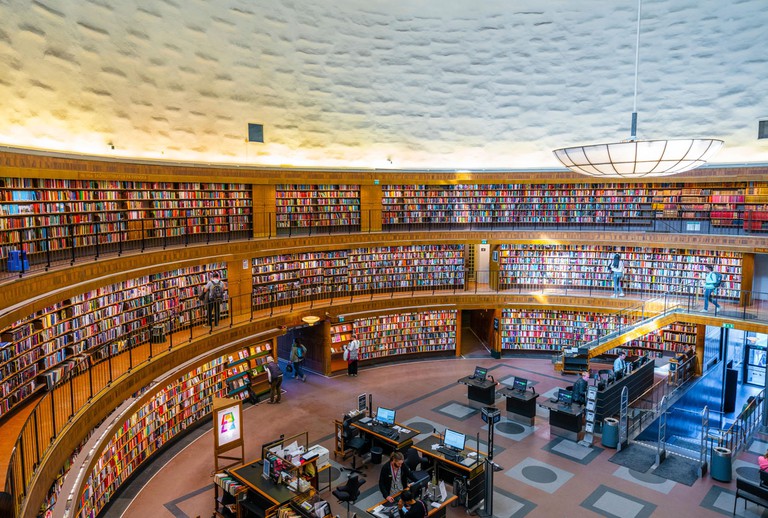 © HelloWorld Images / Alamy Stock Photo
When the Stockholm Public Library opened in 1928, it wasn’t fully completed due to financial issues. But by 1932, this Gunnar Asplund masterpiece was complete and quickly became recognised for stripping away almost all of its architectural decorative flourishes, letting its geometrical basis shine through. Inside, every bit of space is utilised for a specific purpose. It remains one of the most remarkable buildings in Stockholm, and was among the first libraries in Sweden to allow open access to books. 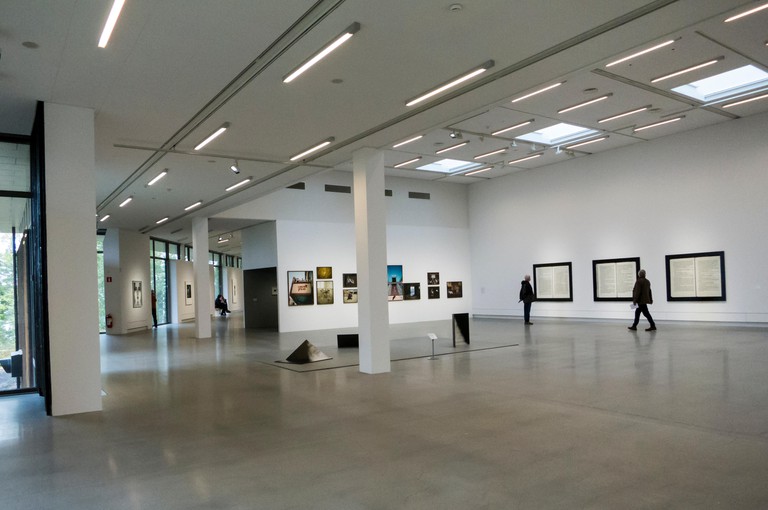 © Rolf Adlercreutz / Alamy Stock Photo
When Swedish architect Johan Nyrén was designing Stockholm’s art museum, Artipelag, he managed to produce a design that is in perfect harmony with its surroundings. Located just outside Stockholm in Gustavsberg, the building is situated in a forest with a view over Baggen’s Bay. Nyrén’s vision was that when visitors first enter the space, they are met by the four classical elements: the fire in the fireplace, the earth on which the building was built, clean air and views of the water on the bay. The edifice is a fitting home to the ambitious art exhibitions and other cultural experiences showcased at the museum. 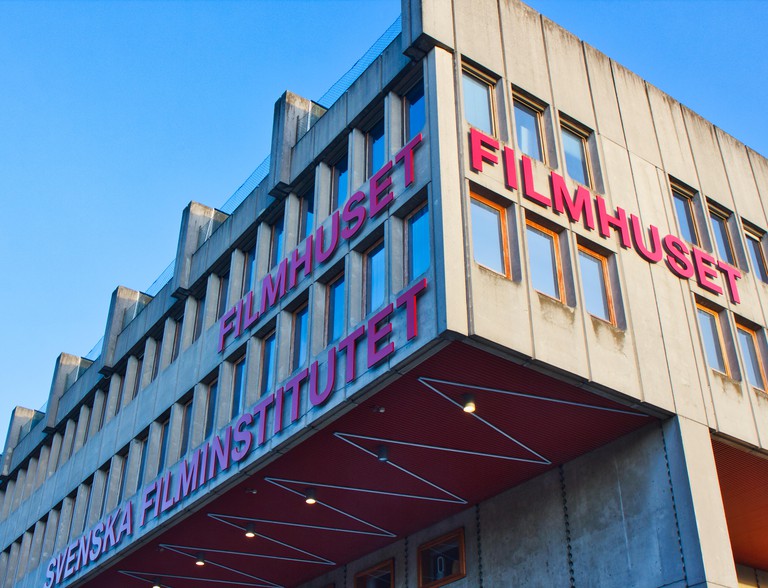 © HelloWorld Images / Alamy Stock Photo
The Swedish Film Institute’s founder, Harry Schein, is known to have said that the organisation’s home would be “no ordinary bloody building”. Swedish architect Peter Celsing, who also designed Stockholm’s Kulturhuset City Theatre and Riksbanken, Sweden’s national bank, certainly complied. The building is controversial, with some finding its concrete bunker-style design sleekly modern, while others sneer that it’s Brutalist. Interestingly, the interior is the complete opposite to the exterior, with an old-fashioned feel to its screening rooms, café, libraries and other amenities. 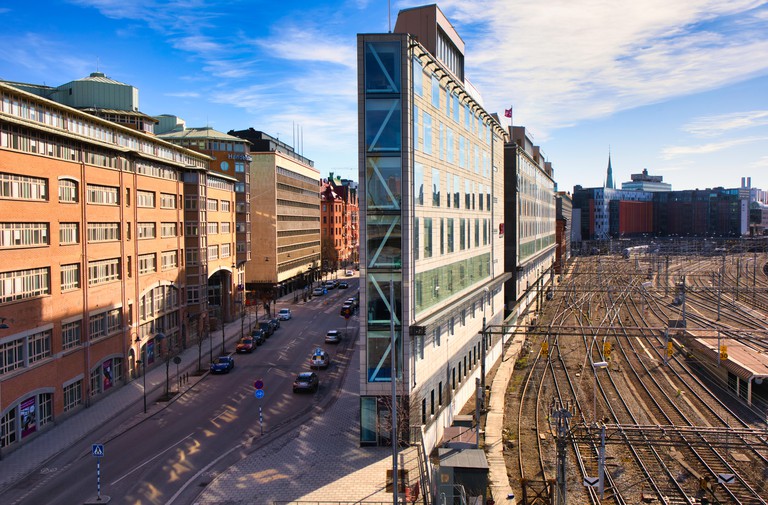 © HelloWorld Images / Alamy Stock Photo
Stockholm’s Flat Iron Building might not be as well known as its New York counterpart, but it’s been attracting plenty of attention since Rosenberg Architects wedged it in between Torsgatan and Central Station in 2009. The grey concrete facade implements striking grid lines, with the large windows featuring the concrete structure that holds them. The slim building is, like New York’s Flat Iron, at its most striking when seen from the side. 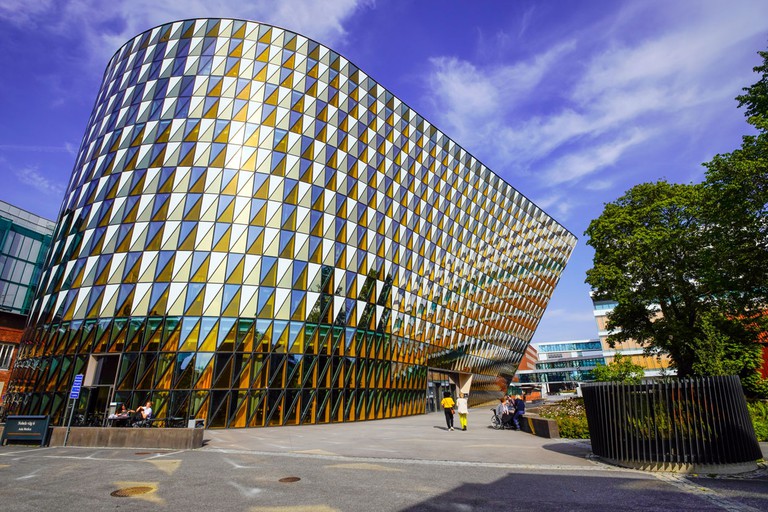 © Michal Sikorski / Alamy Stock Photo
Wingårdh Arkitekter has had a hand in many big Swedish architecture projects, and is the firm behind one of the more innovative new designs to grace Stockholm. This conference centre and lecture hall at Stockholm’s world-renowned Karolinska Institute was planned for more than 50 years. When it finally came to fruition in 2013, it perfectly fulfilled the need for a modern concert hall that sits comfortably on the Karolinska campus. The leaning, V-shaped auditorium is a memorable design, and the glass, mirrored facade beautifully reflects some of the more rustic buildings nearby.