A Street Art Tour of Stockholm

One of Yash's brilliant murals | © Danne Qvarfordt / Flickr
Stockholm is a city infused with artistic talent, with excellent fine art galleries, exciting contemporary spaces and artists all seeking to push the creative envelope. This creativity often spills out onto the streets, with many pieces of street art showcased across the city. These are some of the best artists to check out in Sweden’s capital, as well as where to find them.

Park
Huge's work at Snosatra | Huge's work at Snosatra
Snosatra is the premier location for anyone interested in street art in Stockholm and is a great place to start. It is deep in the south of the city and was once an industrial park. It fell into disrepair, but a group of people got permission to start painting on the walls. It has since turned into the largest graffiti exhibition in Europe.

It is about a 10-minute walk from Ragsved metro station, which is the best way to reach it. It is a great place to catch some of the work of Huge, whose real name is Daniel Fahlstrom – one of his most impressive designs can be found in Snosatra. He is one of Stockholm’s key street-art figures, and paints amazing pieces of art that are almost like photographs in their realism, then adds his mark by adding stencils of helium balloons.
More Info
Open In Google Maps
1 Snösätragränd, Enskede-Årsta-Vantör Bandhagen, Stockholms län, 124 60, Sweden
View menu
Visit website
Visit Facebook page
Send an Email
Give us feedback

Park
Mogul's striking piece | Mogul's striking piece
You can, and should, spend a good amount of time exploring Snosatra if you make the journey down there. The breadth and quality of the art in the park is stunning and there is also an annual festival that is one of Stockholm’s most unique and exciting events. As well as seeing Huge’s work there, you should make sure to seek out Mogul’s. Mogul’s art has a similar vibe to Banksy’s, using stencils bearing political messages to both delight and challenge. Mogul has work dotted across the city, but often, as with Banksy, it often gets removed; Snosatra is your best bet for seeing one of the artworks in situ.
More Info
Open In Google Maps
1 Snösätragränd, Enskede-Årsta-Vantör Bandhagen, Stockholms län, 124 60, Sweden
View menu
Visit website
Visit Facebook page
Send an Email
Give us feedback

Yash’s most famous work is located near to Skanstull metro station, a 15-minute ride from Ragsved and Snosatra. Yash’s real name is Linus Lundin and he is another artist with work across the city. He is inspired by the idea of creating work that is very colourful and contains interesting and unusual shapes. His work often combines people and animals, and is usually very simple and clear in its design and message. He has some work displayed in Snosatra, but this work, in the southern part of the island of Södermalm, is also worth checking out.

Os Gemeos are a pair of Brazilian twins who have been making their mark across the world by painting murals featuring Simpsons-like yellow figures. Their stuff has adorned the walls of cities such as Berlin, New York and Lisbon. It was a coup for the City of Stockholm to work with them to create the fantastic mural that adorns the wall at Fiskargatan. It is just a short walk from either Slussen or Medborgarplatsen t-bana stops. Their work in Stockholm features a mother with her children and is one of the most striking and interesting pieces of art in the city. 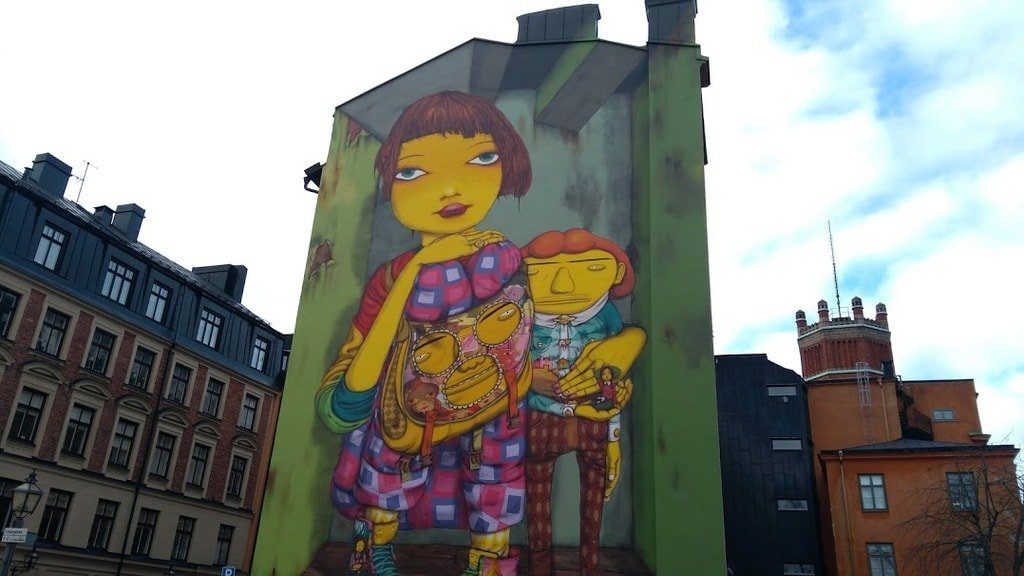 A city’s metro stations are rarely seen as places to take in great art. However, as with Moscow’s metro system and its opulence, the Stockholm t-bana system is full of stations bearing beautiful public art that aims to enliven people’s journeys. In fact, over 90 of its stations host some kind of artwork. There are a number of great examples, but Kungstradgarden is one the best. The station has a number of interesting features, including the fact it was once caught up in a battle between protesters and the city. Ulrik Samuelson was tasked with designing the station in the 1970s and it is filled with interesting artistic touches such as a mural on the ceiling and a mosaic floor. 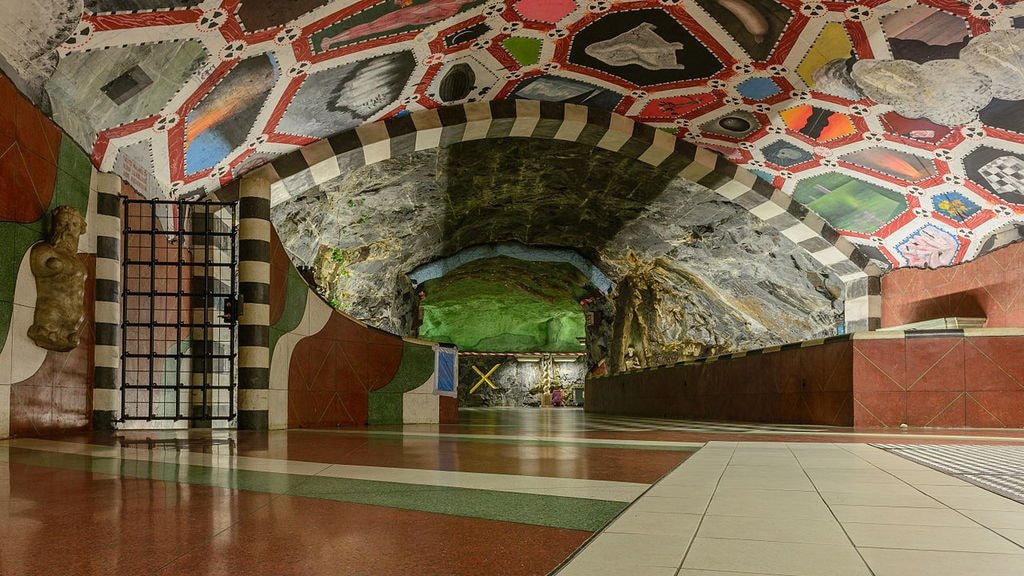 Despite her Spanish-sounding name, Amara Por Dios is a Swedish graffiti artist who has been living in London for the past four years. She creates stunning murals with incredibly vibrant colours that light up any street they are painted on. Her work on Kronobergsgatan matches this profile, with a bright purple background alongside colourful faces; it bears a degree of similarity to a totem pole. The faces represent goddesses and creatures who have been put there to watch over and protect people. It is very near to Fridhemsplan t-bana station, so is very easy to get to. 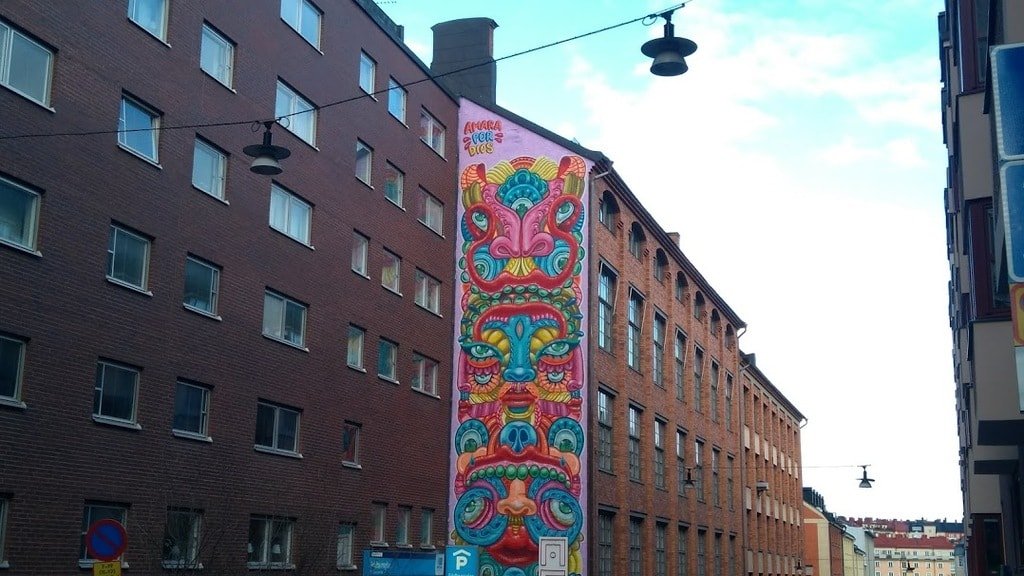 Magic of the City at Frihamnsgatan

The perfect place to finish your street-art tour, as long as you are in Stockholm before March 4, Magic of the City is a superb exhibition of street art. Many of the walls are adorned with paintings and there are various interactive parts of the exhibition to explore. The art is in various different formats, with some works glued to the walls, others scratched in; some have even been crocheted. The exhibition is in Magasin 9, one of Stockholm’s main exhibition centres, and can be reached easily by hopping on the t-bana and getting off at Gardet and walking. It is well worth allocating some time to explore.