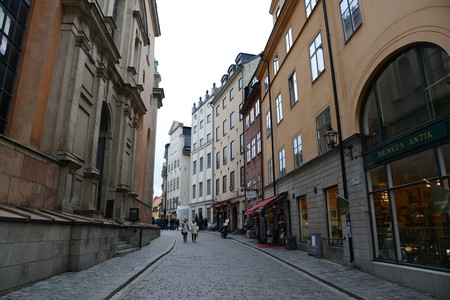 Gamla Stan, Stockholm’s Old Town, is a place where it can be easy to miss things. It is famed for its narrow cobbled streets, which are always full of people excited to see the Royal Palace or the Swedish Academy, or the beautiful German Church. With so many people around, it can be hard to pause and take a breath as it’s easier to follow the crowd from one big attraction to another. This leaves a lot of hidden gems on Stockholm’s most charming island. Storkyrkobadet, the underground swimming pool, is a great example of one of these delightful smaller places to discover.

One of the main reasons to explore Gamla Stan is to get a glimpse of many of the historical sights and places that made Stockholm the city it is. Gamla Stan was the original centre of Stockholm, when it first began to grow, in the 13th century.

It is amazing, wandering around the streets of the Old Town and soaking in the history. The building that houses Storkyrkobadet is a great example of one of these notable locations where you can almost feel the history as soon as you step in. 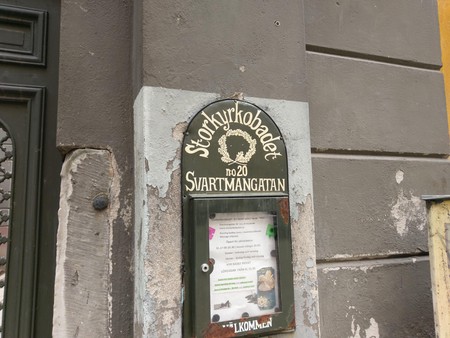 The building, which houses the cellar where the pool can be found, dates back to the 17th century and has had a variety of uses. It began life as a building used by a Dominican convent.

At times, the nuns would use the cellar to keep coal and at others, it would house wine. It stayed as part of the Dominican order until 1890, when the building was taken over by a primary school.

The school with the pool

Stockholm expanded significantly during the 19th century and thus there were more and more children in the city, needing places to learn. The school, not surprisingly, had no need to use the vault to store wine and coal and therefore decided to put a swimming bath there. Children needed to exercise, and a pool was the perfect way to do it. 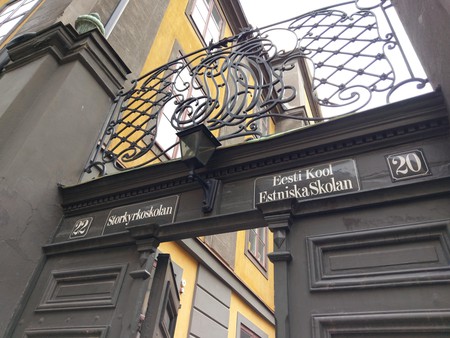 The entrance to the school, and the swimming pool, is beautiful | © jobr5639 / WikiCommons

When the pool was first built, it was designed to be very simple – just a space for swimming down in the vault and nothing much else. However, while the children loved to have a place to swim, the school realised that, quite often, the space was going unused outside of school hours.

When the school was redesigned in 1932, it was decided that the school would open up the space to the public and make it a public swimming bath.

Alongside the relatively small and shallow pool, they added a sauna, small baths with shower heads and lockers that people could use. 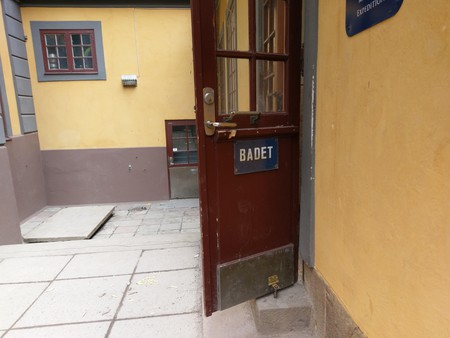 It was a real hit with Stockholmers and seen as a great place to relax as well as to swim. It was as much a meeting place, where friends could hang out, as it was a place to exercise.

One of the many things that adds to the sense of uniqueness about Storkyrkobadet is the fact that it has kept many of the authentic fixtures and fittings, as well as the original rules that governed the pool. The most notable of these guidelines is that women and men have separate swimming times, with women allowed in on Monday and Thursday and men Tuesday, Wednesday and Friday. In both cases, the pool is open from 5pm–8.30pm.

These separate bathing times helped make it an important meeting place for the gay community, and it is famed as the place where journalist Jonas Gardell and his husband Mark Levengood first met. They are arguably Sweden’s most famous, and certainly one of its most beloved, gay couples. 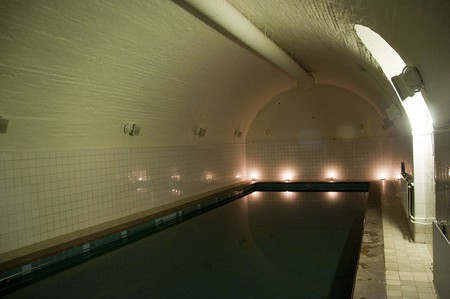 The pool is simple but very elegant | ©I99pema / WikiCommons

The bath came under threat during the 1980s, with fewer people visiting and the price of keeping it open rising. It seemed like the city, who ran both the school and the baths, was going to close it. However, a group of people who called themselves The Society of Merry Bathers, volunteered to keep it open and managed to save it. They were awarded a prize by one of Sweden’s newspapers, Dagens Nyheter, for preserving such an important historical and cultural institution.

Storkyrkobadet does, however, continue to have an uncertain future. The volunteers who run it are both passionate and driven, however, a great deal of its funding comes from the modest fees they charge for entrance and memberships.

It seems every year like the baths might not be able to make ends meet, so if you are in Stockholm you should take the chance to offer your support, and visit this wonderful historical landmark before it’s too late.