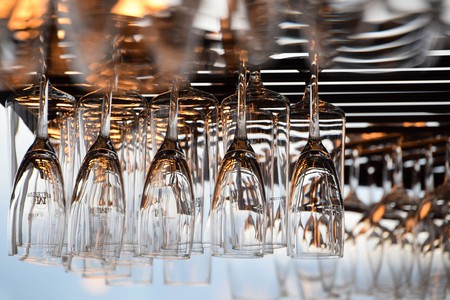 Situated on the west coast of Sweden, Göteborg is a paradise for seafood lovers who come here from all over the world for a taste of the freshest lobsters, prawns, mussels and oysters. Boasting the highest number of fine dining restaurants per capita in Scandinavia, Göteborg was rightly recognized as the Sweden’s Culinary Capital in 2011 and Food Capital in 2012. Here is a selection of the city’s ten best cultural restaurants.

At the top of the Gothia Towers, Upper House Dining is a wonderful setting for taking in the magnificent skyline views of Göteborg over a sumptuous, high quality Swedish meal. A team of creative chefs work with seasonal ingredients to produce six-course menus comprising of traditional dishes, including lobster and reindeer, with a contemporary twist. At Upper House Dining, waiters make the guests feel special by discussing their tastes and preferences before taking orders, and all input is taken into account to ensure a fully customized gastronomic experience. This is a place where you will feel on top of the world – before, during and after an unforgettable meal. 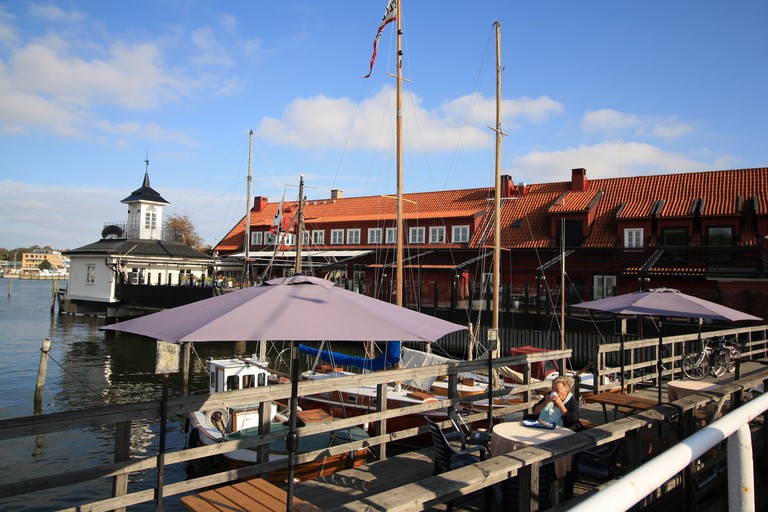 Sjömagasinet | © Blondinrikard Fröberg / Flickr
This is a perfect venue for a riverside dining experience with full focus on the fruits of the sea. Freshly caught shellfish, herring platters, oyster filled sole or lobster salad are just a few of the favorites on the menu. All ingredients exude freshness, coming from the North Sea or sourced from the local market. Sjömagasinet is run by well-known Swedish chef Ulf Wagners, who has been exercising his epicurean passion for over fifty years while working his way around some of the best-known restaurants in Göteborg. Now working with Gustav Trägårdh, one of Sweden’s young celebrity chefs, the team has earned a Michelin star and was awarded the 2011 Best Business Restaurant of the Year by the Swedish newspaper Di Weekend.
Open In Google Maps
5 Adolf Edelsvärds gata, Kungsladugård Göteborg, Västra Götalands län, 414 51, Sweden
+46317755920
Visit Website
Give us feedback

Restaurant, Swedish
Facebook
Email
Twitter
Pinterest
Copy link
Share
Map View
It would be impossible to go to the Linnéa Art Restauarant solely for its outstanding food. Decorated with modern glass sculptures and objects designed by glass artists from Kosta Boda, dining at Linnéa art is like entering a giant glass menagerie. Head chef Edin Dzemat is an expert in contemporary cuisine and has been dubbed by his peers as the ‘Zlatan’ of the Swedish culinary world. Among his signature dishes are veal with baked egg yolks or lemon cured scallops. His tasting menu gives the curious palate a chance to delight in an explosion of different flavors, perfect for lovers of art and food.
Open In Google Maps
Gothenburg, Sweden
Give us feedback

Restaurant, Swedish, European, $$$
Facebook
Email
Twitter
Pinterest
Copy link
Share
Map View
Nestled in the Radisson Blu hotel near the Lindholmen Science Park, the Cuckoo’s Nest is a fun place to go, especially for budding geniuses! Invention, research and development, mathematical problems and science laboratories are all inspiration for the Cuckoo Nest’s unique interior design. Not such a crazy choice given that the restaurant won the 2013 Best Bar Award attributed by the European Hotel Design Award scheme. Guests are invited to experiment with the ‘variables’ proposed on the menu to create their own meal or to pick from the ‘constants’ such as the house burger with blue cheese dressing or Sweden’s traditional shrimp sandwich. Overlooking the harbor, guests can enjoy this innovative food experience while looking out to sea and mulling over a new idea.
Open In Google Maps
4 Lindholmspiren, Lindholmen Göteborg, Västra Götalands län, 417 56, Sweden
+46313834030
Visit Website
Give us feedback 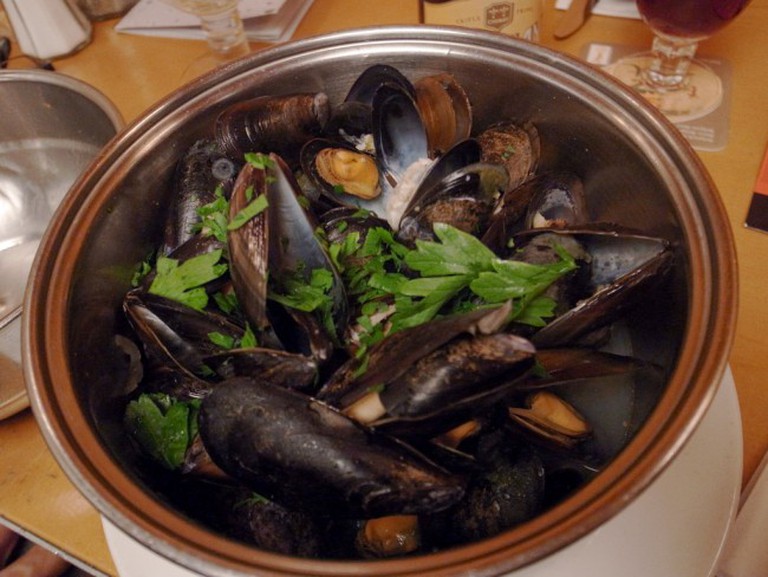 Fresh Mussles | ©Pelican/Flickr
You can almost smell the sea as you enter this 17th century building overlooking the Göta canal, where lobsters and shellfish are as much of the decoration as the sea-green walls clad with paintings depicting ocean views. Fiskekrogen is classed as the best fish restaurant in Göteborg thanks to chef Lars Ahlström who, together with his team of chefs, has been applying his knowledge and expertise of the sea here for almost two decades. The weekend shellfish buffet is an ideal opportunity to get the full taste of every shrimp, mussel or oyster that has been freshly brought in from the harbor, or there is the option of chartering a yacht to enjoy the taste of Fiskekrogen at large.
Open In Google Maps
1 Lilla torget, Inom Vallgraven Göteborg, Västra Götalands län, 411 18, Sweden
+4631101005
Visit Website
Give us feedback

Restaurant, French, $$$
Facebook
Email
Twitter
Pinterest
Copy link
Share
Map View
With its bistro ambiance teeming with French names and French specialties, Le Pain Français brings a touch of Paris to the middle of Göteborg. The extravagant interior designed by Stylt Trampoli is reminiscent of the party scenes in Baz Luhrmann’s Great Gatsby. This is the place to sample coffee and a croissant whilst you read the newspaper or a delicate French pastry and a glass of the best champagne. The lunchtime menu proposes a choice of delicious quiches and the heavenly bread comes from Le Pain Français’ own authentic bakery certified by the National Institute of Bakeries and Patisseries in Rouen, France.
Open In Google Maps
7 Kungsportsavenyen, Lorensberg Göteborg, Västra Götalands län, 411 36, Sweden
+4631124444
Visit Website
Give us feedback 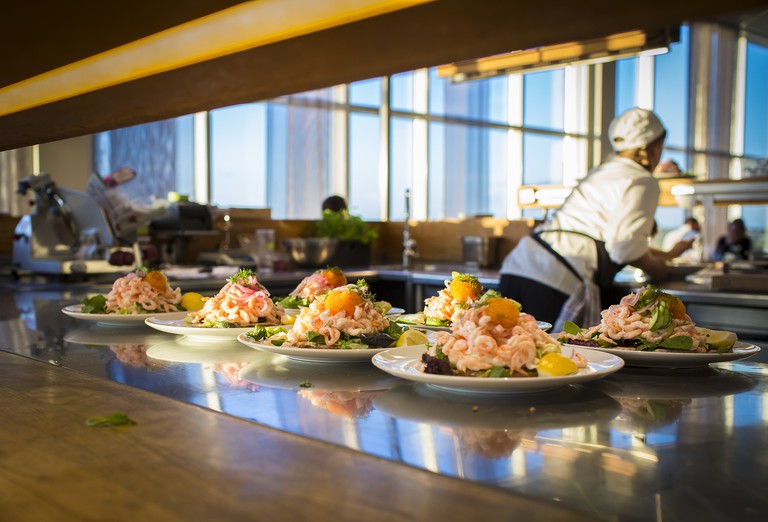 Shrimp Cocktail, Heaven 23 | © Danne Qvarfordt / Flickr
For the best shrimp sandwich in town, ascend to the dizzy heights of Heaven 23, a modern cocktail bar and restaurant on the 23rd floor of the west tower of the Gothia Tower complex. The restaurant’s signature open shrimp sandwich can be savored at the bar at all hours or selected from the restaurant’s menu in its deluxe version. People have been talking about Heaven 23’s shrimp sandwich since 1984 and it continues to get coverage in the Swedish press. The impressive views of Göteborg and the sea are all the more reason to climb up to Heaven 23 along with the restaurant’s selection of culinary creations, which include scallops with yuzu gel and seaweed, redfish with pak choi and cabbage crisps, or dark chocolate panna cotta with liquorice sorbet.
Open In Google Maps
22 Mässans gata, Heden Göteborg, Västra Götalands län, 412 51, Sweden
+46317508805
Visit Website
Give us feedback

Restaurant, Swedish
Facebook
Email
Twitter
Pinterest
Copy link
Share
Map View
Situated in the Elite Plaza hotel, a former 19th century insurance building, Swea Hof is the epitome of elegance. The restaurant is a converted courtyard and has retained its late 19th century atrium features with high ceilings, marble flooring and stylish light fittings. Despite being enclosed, Swea Hof has an open feel to it, with natural light pouring in from the glass roof and an open kitchen preparing a feast of oysters, shellfish platters and traditional Swedish dishes such as dill-cooked lobster. Flavorsome Swedish cheeses appear among a selection of the better-known French names and traditional desserts are served with a contemporary twist. Locals come to Swea Hof over the Christmas period for the best Julbord (Christmas buffet) in the city comprising seafood and many a pickle.
Open In Google Maps
3 Västra Hamngatan, Inom Vallgraven Göteborg, Västra Götalands län, 411 17, Sweden
+46317204040
Visit Website
Give us feedback 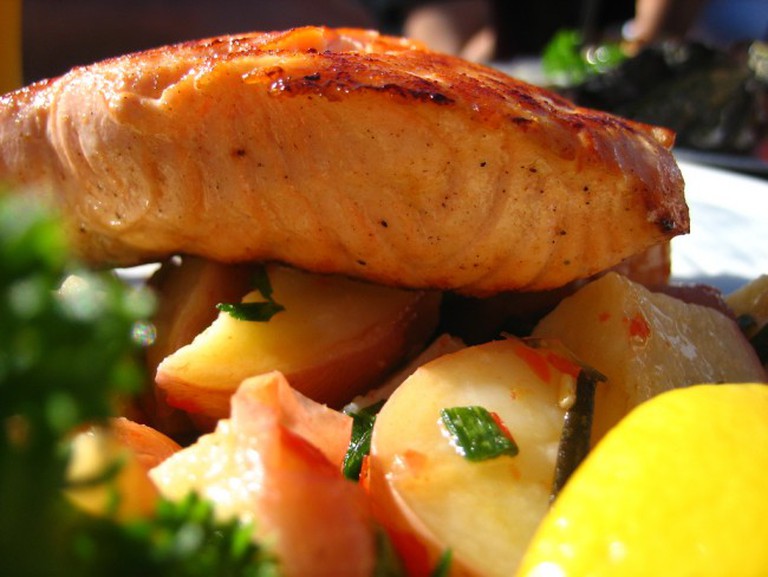 Salmon and Potatoes | ©Jeremy Keith/Flickr
In the 19th century ETT (Swedish for ‘number 1’) was a popular address for prominent businessmen and politicians who came here to enjoy the high life while mingling with libertines. Today it remains a place of enjoyment and features great gastronomy with dining areas in three distinct styles; a brasserie-style space that is ideal for a casual meal accompanied by live background music, a Chef’s Table with crisp white contemporary decor and exposed to the culinary action of the adjoining kitchen, and a more classic setting looking out onto the street life of Göteborg’s prestigious Aveyn or ‘Avenue’. With a wide variety of meat dishes as well as the plentiful selection of seafood, this is a good stop for both meat and fish lovers.
Open In Google Maps
1 Kungsportsavenyen, Göteborg, 411 36, Sweden
+4631107730
Give us feedback 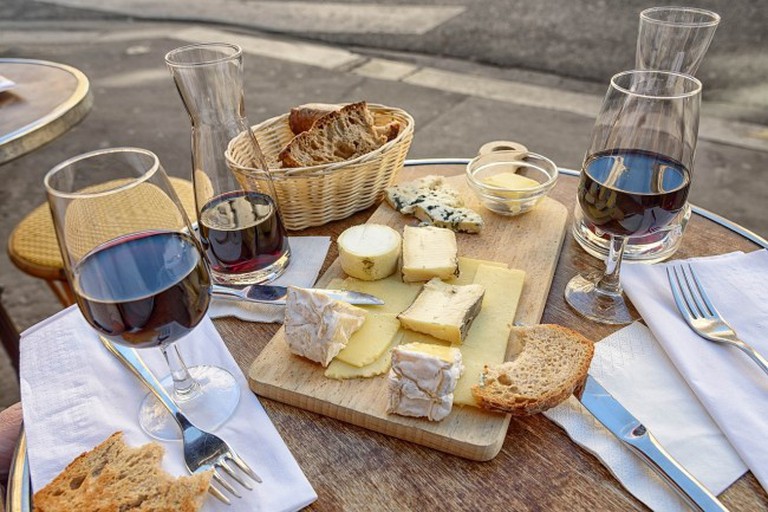 Cheese and Wine | © Pixabay
Dinner 22 is conveniently placed among Göteborg’s theaters and concert halls, just a stone’s throw away from the Liseberg amusement park. Its menu comprises a vast selection of Swedish and international cuisine using creative combinations to create dishes such as bleak roe with vodka cured cheesecake or marinated halloumi with green vegetables and smoked pepper dressing. Boasting an impressive selection of wines, Dinner 22 is also a great place for cheese and wine night, enjoyed in the subdued candlelit ambiance inside the restaurant or in the upstairs private room with its bold black-and-white striped wall paper.
Open In Google Maps
22 Södra Vägen, Heden Göteborg, Västra Götalands län, 412 54, Sweden
+4631811055
Visit Website
Give us feedback
Give us feedback