A Breeze From the North: Five Contemporary Swedish Artists

Sweden, along with other Scandinavian countries, has until recently remained relatively obscure on the world’s art stage. However, interest from international curators in the contemporary art scene suggests that this may be changing. Here are five Swedish artists whose innovative works are beginning to engage art lovers across the global. 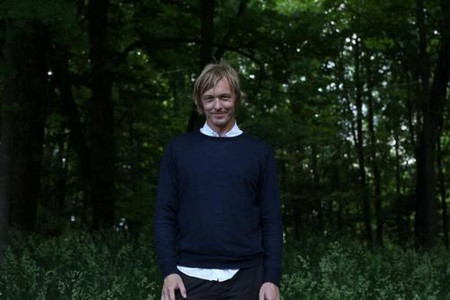 Artist Jonas Dahlberg’s work encompasses the territories of art, film and architecture. Through these mediums he portrays spaces in which the viewer can examine their psychological state in relation to their surroundings. In his films, Dahlberg creates imagined interiors in which he can manipulate the viewer’s movement within the scene. By recording and tampering with small architectural models which appear as life size structures through his films, Dahlberg experiments with different ways of encountering architectural spaces.

In his silent, black and white, three channel installation entitled Three Rooms (2008), the viewer is given access to three vacant domestic interiors. As objects within the room begin to dissolve into nothingness, larger masses crumble to the floor as the balance of various pieces of furniture is upset. This effect was achieved by forming the furniture from paraffin, which, when placed in a heated liquid, begins to melt away. The viewer is asked to negotiate their material and mental presence within a disappearing habitat.

While his films are mostly devoid of human presence, Dahlberg has also been known to create stages for public involvement through installations like his recent An Imagined City (2012). Here the focus is turned on the viewer, as an old Post Office in Stockholm becomes the backdrop for public interaction within this reworked environment. Dahlberg’s fabricated surroundings serve as political reminders of how constructed space filters our experience of both our interior and exterior worlds. 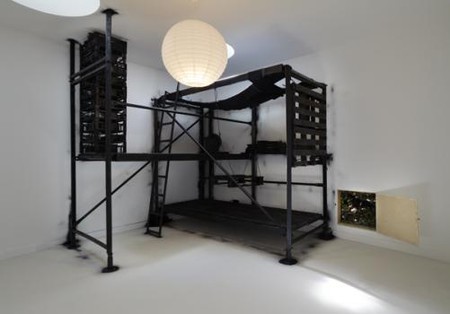 Swedish artist Klara Liden is also interested in the way in which certain physical settings dictate one’s way of living within them. Liden works within various defined spaces in order to explore how human behavior is predetermined by the ideas of how they should be used. In her performance, video, and installation works she constantly seeks to identify the limits of activity within certain territories, both in public and private domains, in order to push beyond the boundaries that these create. Frequently this effort results in bringing private activity to public areas, or vice versa. Throughout her projects, the artist takes on the character of defiant rebel and provocateur, ardently acting as an instrument of difference.

Liden’s desire to re-appropriate space has resulted in her use of recycled materials to create architectural interventions within the gallery. In a 2007 installation entitled Unheimlich Manoeuvreat at the Moderna Museet in Stockholm , she transported all of her private possessions from her home into the institution as a way of disrupting the function of the museum. Likewise in Trashcan(2010), for which Liden received a special mention at the 2011 Venice Biennale, the artist collected ten garbage containers from various international cities and brought them into the gallery. By stealing these city owned objects, the artist performs a kind of vandalism. Liden defaces the urban structure of the localities from which she steals the cans by removing them from the highly controlled public realm and placing them in the unlikely territory of the white cube. By deprogramming our understanding of certain areas, the artist questions the constraints that are placed upon us by our environment.

Nathalie Djurberg is known for her short claymation films in which characters occupy a distorted reality. Although initially innocent in their narrative, events become unsettling, with violence, sexuality, bestiality and sadism erupting on screen. The combination of animation, which recalls the medium of children’s fairy tales, with psychologically disturbing, nightmarish imagery, makes Djurberg’s films all the more menacing.

In Djurberg’s 2011 exhibition World of Glass at the Camden Arts Centre in London, elements of her film spill out into the gallery. As such, upon entering the exhibition space, the viewer seems to invade the domain of the video. Two screens are separated by an expanse of long tables cluttered with decorative vessels seemingly made out of glass. Meanwhile chiming music penetrates the space, echoing the sculptures within it. On one screen a woman with exaggerated features sits in a room where similar translucent objects occupy a table. Accompanying her is zoo of animals. When the woman’s leg becomes ensnared in the teeth of a bear trap, a fox comes to chew her leg free. A reindeer then carries her mangled body on his back. Sensations of torture and ecstasy are entangled in this horrific affair, as it is unclear whether the animals present a sense of safety or a threat for the female figure. Ultimately, Djurberg aim is ambiguous throughout her practice, as she ignores any kind of a moral compass in her exploration of primitive impulse. 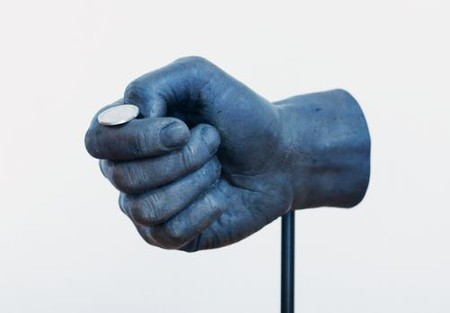 Christian Andersson acts to resurface histories, and engage with forgotten knowledge through his art as a way of challenging our perceived truth about our shared history. In doing so, Andersson engages with notions of time as it relates to our knowledge of transpired events. Through an archival method of working, the artist wishes to challenge the normal thought patterns of his viewers by presenting the possibility of multiple perspectives.

In his work, Paperclip (The Baghdad Batteries) (2009) Andersson presents an intricate device made from terracotta pots all wired to a central rod. The installation is a replica of what some believe to be an early example of a battery from Baghdad in the first century AD. By questioning the generally accepted truth that Alessandro Volta was responsible for the battery’s invention in 1800, the artist subverts the discourse of cultural progression over time.

Likewise, in his installation ‘From Lucy with Love‘ (2011) at the Moderna Museet in Malmo, Andersson set up a glass vitrine containing artifacts ranging from ancient skulls to contemporary postcards. The ordering of the arrangement is unclear, and as one navigates the case, new juxtapositions emerge between the objects. The viewer is invited to rework linear history, creating new histories while disrupting our understanding of fact and fiction. 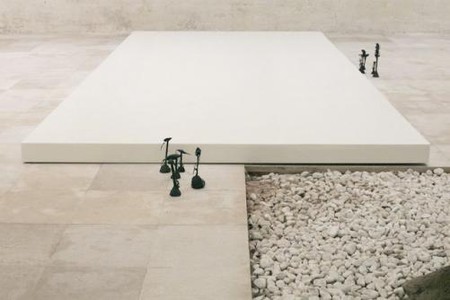 Andreas Eriksson’s conceptual works of sculpture, painting and photography are strung together as objects of subtle poetry. Eriksson was forced to move from the city to the Swedish countryside years ago when he developed extreme electro sensitivity. He has since developed an oeuvre which strongly reflects his perceived state in relation to his surroundings as both a place of refuge and confinement. As an artist he is very much aware of the way in which we all view the world from a particular viewpoint, and wishes to capture this subjective nature of being through his art.

Small occurrences in the nature surrounding his home become the subjects of his work.  The sculpture series, Content is a Glimpse, are bronze birds suspended on what appear to be branches. The inspiration for the piece came to him when a bird mistook the window of his studio for an opening, and was killed while attempting to pass through it. Both the feeling of guilt for its death and the wish to preserve the memory of the bird, prompted him to cast the bird in bronze.

Even through his abstract paintings, the artist captures experiences which would otherwise be ephemeral. For his Shadow Paintings project he photographs the shadows cast by passing cars on the walls of his home. He then undergoes a process of transferring the images onto aluminium and painting over the surface in grey. These once precarious obscurities become fixed through their reproduction. Eriksson’s artworks unite his mental state and physical surroundings in poetic harmony.