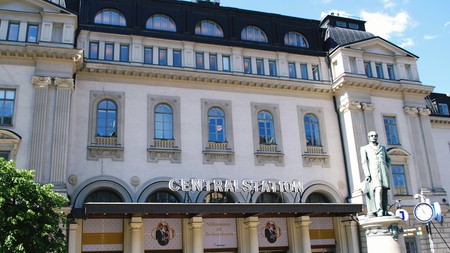 For many people visiting Stockholm for the first time, the first place they will probably see is the city’s central station. Stockholm is conveniently linked to the rest of Scandinavia by train, which means that a lot of tourists decide to take advantage of this well-priced and efficient manner of travel. Needless to say, taking the train makes it quite easy to see more of Denmark, Norway and Sweden.

The central station in Stockholm, then, is a hub for both domestic and international travellers. It has connected the city to the rest of the world since it first opened its doors on the July 18, 1871. It is a beautiful station but, at first sight, it can seem like a fairly unremarkable place. Like many other stations, it is chock full of shops, commuters and fast food restaurants. However, it has a number of fascinating features and quirks that make it more interesting than other transport hubs. These seven facts illustrate why, if you are ever in Stockholm Central Station, you should make sure to stop and look around.

There is a room reserved for royals

Members of the Swedish Royal Family are unlikely to be seen hopping on the commuter train to Uppsala or taking the t-bana back to the Royal Palace in Stockholm’s Old Town, Gamla Stan. However, if they are ever inclined to make use of Sweden’s publicly owned train network, they don’t have to rub shoulders with their citizens in any of the public waiting areas. They don’t even have to use the same entrance as the hoi polloi because they have their own, which leads directly to their personal waiting room. This room is as ornate as you would expect, with a number of beautiful chandeliers, furniture covered in silk, and even a lovely golden clock. It is rarely used by the royals, so on very special occasions members of the public can visit it, but for most commuters it remains something they will never see or even know about.

In recent years, a new train company, MTR, has stepped in to challenge SJ, Sweden’s public train provider, by offering quick and cheap train journeys to Gothenburg. However, MTR is not the only challenger to SJ when travelling between Sweden’s two biggest cities – if you are looking for an unusual and special way to get to Gothenburg, then Bla Taget (Blue Train) is the best way to do it. This service commenced in 2011 and their trains are made up of renovated carriages from the 1960s. These trains feature a bar with a piano player as well as a restaurant with full table service. It might not be the quickest route to Gothenburg, but it is absolutely the most stylish. 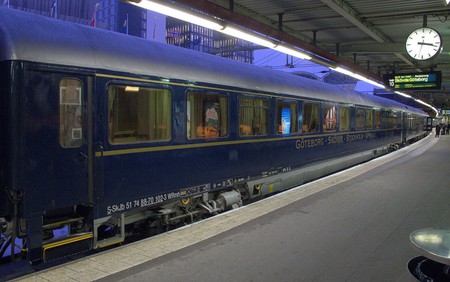 The architect was a serial station designer

When Stockholm Central Station was first being conceived, locals wanted a design that was in sync with Swedish style and ethics. They didn’t want something too flashy, something that would be too out of place in a country that has always valued equality and simplicity. Therefore, it was decided that Adolf W Edelsvard would be the architect. He had already been the head designer of Gothenburg and Malmo stations, which were both opened in 1856. The Swedish state railway company decided to keep it simple by sticking with the same designer for each of the three most important stations.

There’s an interesting statue outside

Despite his efforts in designing three railway stations in Sweden, Edelsvard was not rewarded with a statue of himself outside his biggest project. That honour went to Swedish engineer Nils Ericson who, along with having a statue outside of Stockholm Central, also has the main bus station in Gothenburg named after him. Edelsvard may have given the Swedes a place to take the train from, but it is Ericson who made train travel possible in Scandinavia’s largest country. He was tasked with designing the railway system in Sweden, including the line between Stockholm and Gothenburg. When the station was renovated in 2012, his statue was given ear muffs and a sign under that read “Jäsicken hvilket oväsen (“Oh my gosh, what a noise”). 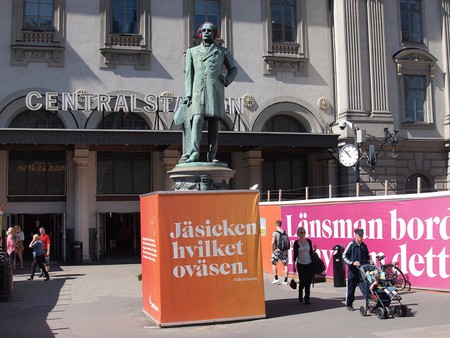 The statue and its earmuffs | © JIP/WikiCommons

Its new commuter station is the busiest in Sweden.

Recently, the city decided to move the location of commuter trains going from Stockholm to its surrounding areas. Commuters had been forced into an old and run-down part of the station with small platforms and no places to pick up food or magazines, so the need for a new station within Stockholm Central Station was felt. Thus, the city invested the largest sum in Stockholm’s rail system since 1950 for this project. It was estimated to have cost around $2.4 billion. It was, however, worth it, as the new station– called Stockholm City– is now Sweden’s busiest station (outside of the Stockholm metro) and is both modern and beautiful. It also gives commuters the space to pick up a coffee or a newspaper before they make their journeys home.

The King and Queen opened the metro station in 1957

The year 1957 was a very important one for travel in the city of Stockholm. A central metro station was finally opened, aiming to give commuters a place to change trains and make connections in a rapidly growing underground train system. (The first line that had opened in 1950 had proved to be a huge hit with locals who now had an easy and fast way to get to other places in the city.) T-Centralen, as the metro section of the central station is called, has seen as many as 330,000 visits in one day. The city clearly knew it would become an important feature of Stockholm, which is why the King and Queen of Sweden – King Gustaf VI and Queen Louise – were invited to cut the ribbon and open the metro station on November 24, 1957. 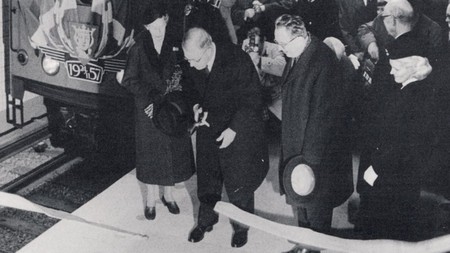 There is a co-working space inside.

If you ever have a long wait between trains and are desperate to get some work done, it is possible to find a quiet corner to plug in your laptop and log on to Wi-Fi. However, if you need a printer, a silent space, or just a proper desk, then there is co-working space right inside the station. You can even see the departures board from one of its windows. Called No18 Grand Central, it was original opened by SAS, the airline, but is now run in collaboration with No18, the company that has another co-working space in Stureplan. There is also a restaurant and juice bar in there if you want to get some food while you work. The company calls it ‘Scandinavia’s most central business lounge’ and it is hard to argue otherwise.