The 16 Most Unusual Hotels To Stay In Before You Die 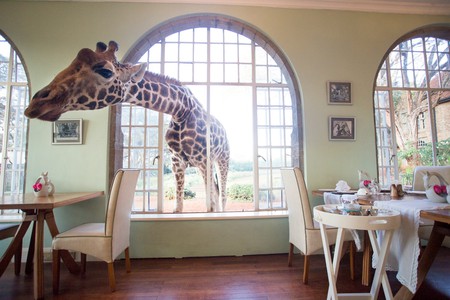 Basic B&Bs or straightforward five-star luxury may be alright for some, but often a vacation is made all the more special by staying in an entirely unique hotel. Luckily we’ve profiled some of the most unusual, unique and quirky hotels and accommodation across the globe, from Sweden’s iconic ICEHOTEL to Kenya’s Giraffe Manor, where guests can expect a visit from a legendarily tall ruminant or two. 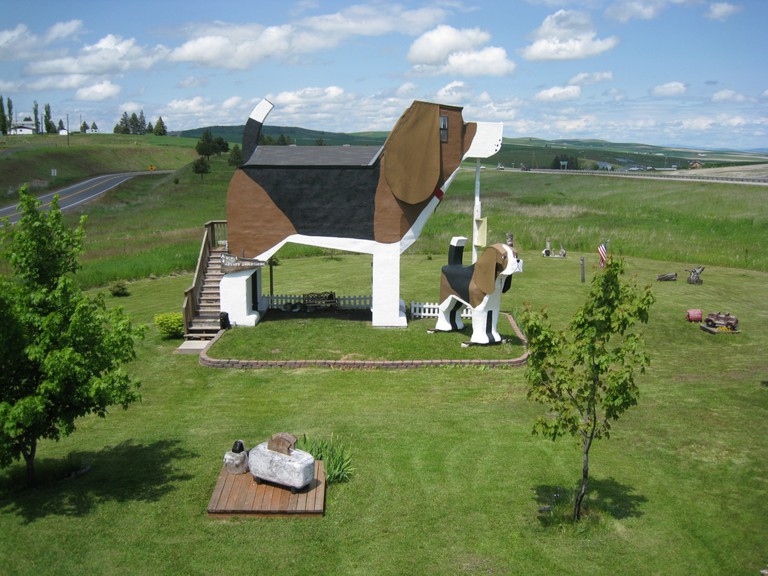 Inspired by filmmaker Jonas Selberg Augustsen’s 2008 documentary The Tree Lover, Treehotel – a series of unique, modern ‘treerooms’ suspended above the forest floor in northern Sweden – was designed with the goal of getting guests back to nature. Its six ‘treerooms’ include the Mirrorcube, a cozy suite whose outer walls reflect the surrounding scenery, the self-explanatory UFO and the Bird’s Nest – a quirky, luxury room with an exterior constructed from branches that cleverly camouflages with the nearby trees. 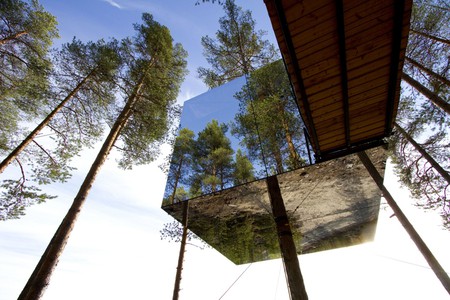 The Mirrorcube at Treehotel | Courtesy Treehotel 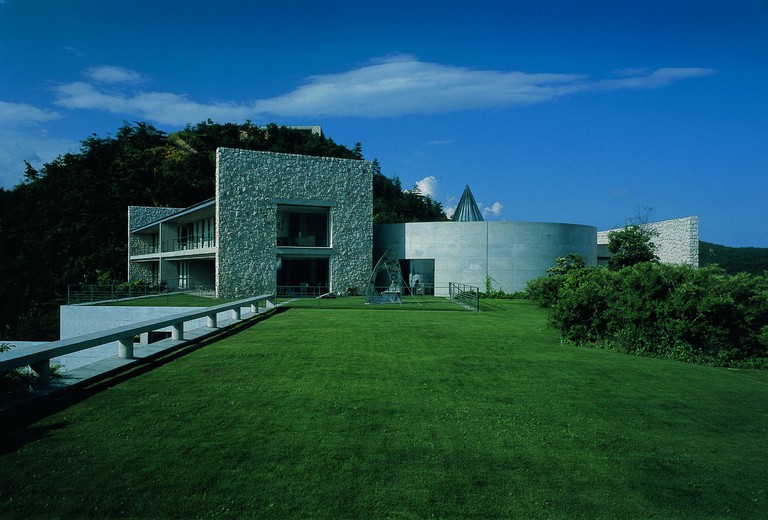 Benesse House | Courtesy Benesse Art Site Naoshima/Photo: Tadasu Yamamoto
Part hotel and part museum, Benesse House is a must-try lodge for any art lover. Opened in 1992 on Japan’s Naoshima Island, the space was designed by acclaimed architect Tadao Ando around the concept of ‘coexistence of nature, art and architecture’. Not only do contemporary artworks adorn each floor and guest room, Benesse House is also surrounded by outdoor sculptures and installations by artists including American land art forerunner Walter De Maria and Tokyo-born Shinro Ohtake. The site makes for a convenient base for exploring the wider Benesse Art Site – a group of museums and art projects throughout Naoshima Island and the neighboring Teshima and Inujima islands.
Open In Google Maps
Tsumuura Naoshima, Kagawa, 761-3110, Japan
+81878923223
Visit Website
Give us feedback 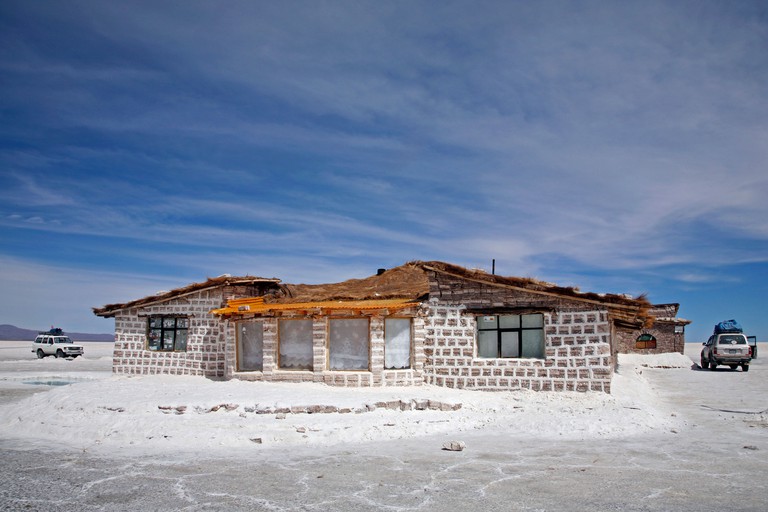 © Arterra Picture Library / Alamy Stock Photo
View Rooms
Located on the eastern shore of Bolivia’s Salar de Uyuni – which, stretching for over 4,000 square miles, is the world’s biggest salt flat – the 30-room Palacio de Sal takes its architectural cue from its surroundings and is constructed entirely from salt from its floors and ceilings to its beds and chairs. The saline theme extends to Palacio de Sal’s onsite restaurant El Mesón too, where the signature dish is, funnily enough, salted chicken.
EVERYTHING YOU NEED TO KNOW

We’ve all heard the nursery rhyme ‘There was an Old Woman Who Lived in a Shoe’ – well, The Boot in New Zealand’s beautiful Tasman region brings the child’s poem to life. The boot-shaped cottage features a bedroom with its own Juliet balcony, a kitchenette and cozy lounge set amongst a gorgeous, fragrant garden with sun loungers and an outdoor fire. A stream that runs through the grounds is home to longfin eels between September and May tame enough to be fed by hand, while the onsite Jester Café is on hand to satisfy guests with tasty treats.

Formerly the site of the Charles Street Jail, whose infamous inmates included disgraced local mayor James Michael Curley and murderous anarchist duo Sacco and Vanzetti, The Liberty underwent an award-winning renovation in 2007 and is today one of Boston’s most luxurious, unique hotels. Many of the building’s original features are retained including its catwalks and beautifully preserved atrium, which now acts as the hotel’s lobby, and are complemented by new additions like the appropriately named CLINK and Alibi restaurants. 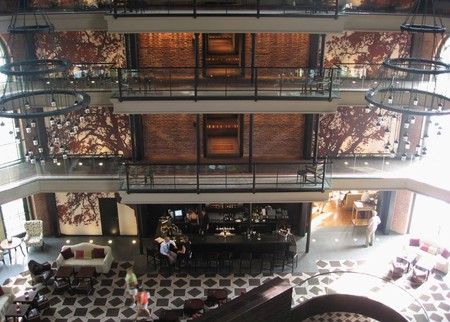 The lobby of The Liberty Hotel, Boston | © P/Flickr

Park, Zoo
Facebook
Email
Twitter
Pinterest
Copy link
Share
Map View
At first glance, Kenya’s Giraffe Manor – a beautiful, stately building dating back to the 1930s surrounded by lush, green gardens and charming courtyards – looks like a regular luxury hotel, but that’s until its entirely unusual residents how their faces (hint: the clue is in the name). Yes, Giraffe Manor – alongside the neighboring Giraffe Centre – is home to a herd of endangered Rothschild giraffes prone to poking their head through the hotel’s windows during mealtimes for tidbits.
Open In Google Maps
Duma Road, Nairobi, Nairobi County, Kenya
+254208070804
Visit Website
Give us feedback

Seeker Stories – “You really appreciate the size of a giraffe’s head when it’s in your cereal bowl.” – Quite possibly the most unique place you could ever stay! / 3:29 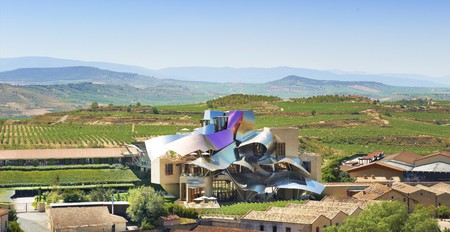 The Beermoth – located on Scotland’s Inshriach House estate and converted from a Commer Q4 truck dating back to the mid-1950s salvaged by estate owner Walter Micklethwait – brings ‘glamping’ to another level. If you think it might get a little chilly in The Beermoth, fear not. The truck houses a wood-burning stove and just nearby is the Inshriach Distillery and Saloon, winner of the 2015 Shed of the Year Award, serving house-made gin crafted from homegrown juniper just perfect for warming your cockles on nippy Scottish nights. 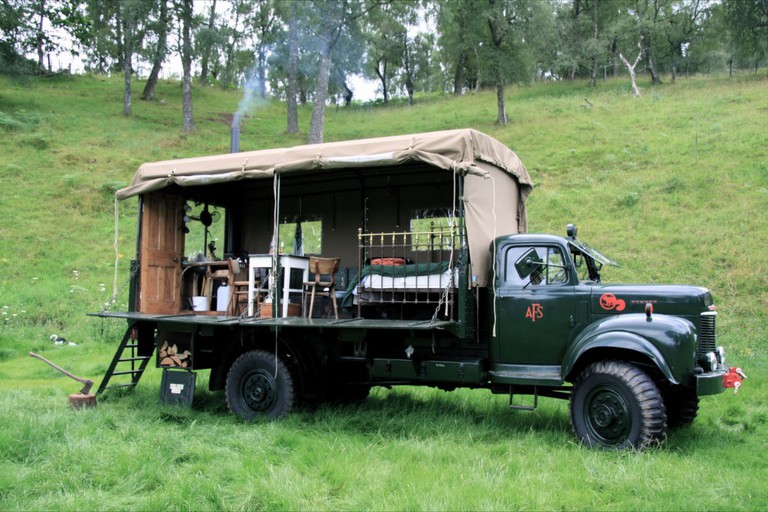 The Beermoth | Courtesy Canopy and Stars

Nestled in the foothills of Mount Baw Baw in Australia’s beautiful Gippsland region, Mira Mira offers ‘luxury accommodation in bushland surroundings’ through its three unique and quirky lodgings. Choose to stay in The Cave, a subterranean suite entered through the mouth of a stone carved face, the enchanting, Gaudi-inspired Tanglewood or the pond-side Japanese-style Zen Retreat. Wildlife lovers keep your eyes peeled – Mira Mira is home to a number of resident wombats (Dozer, Dozer Jr and Mini Me) and a wallaby named Victor. 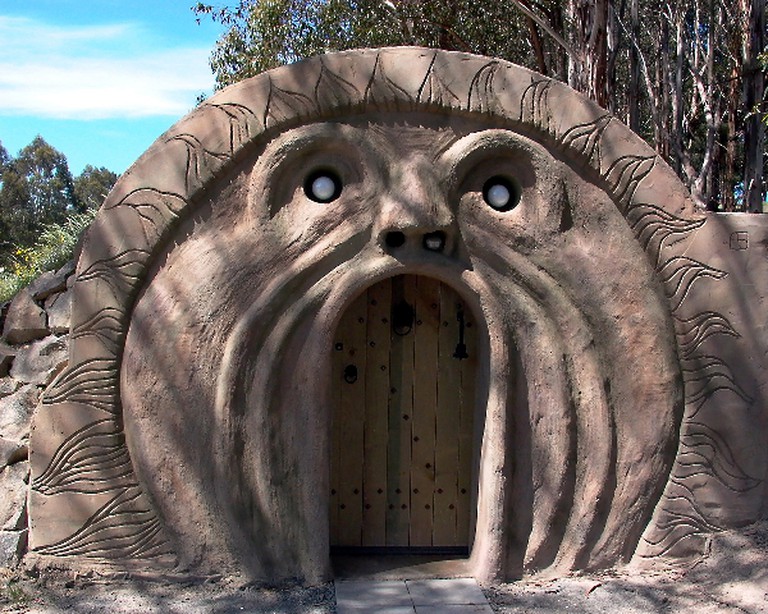 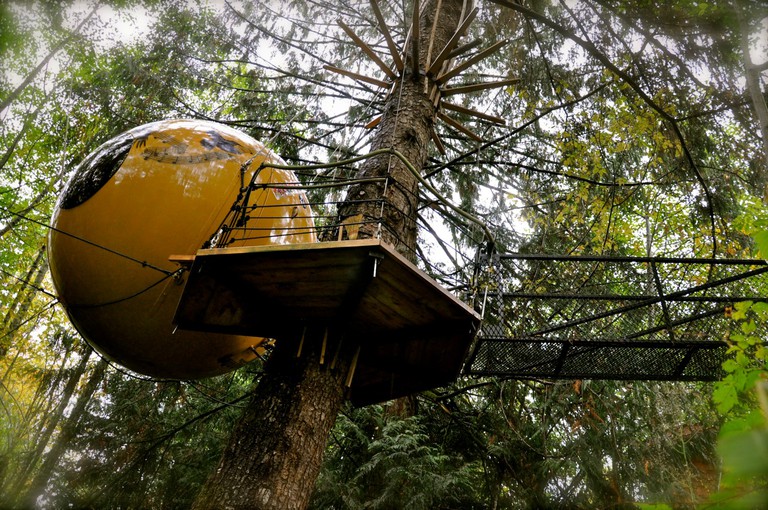 Described as a ‘magical forest hotel’, Free Spirit Spheres are three cozy, spherical treehouses suspended among the trees of Vancouver Island’s enchanting coastal rainforest, designed by master craftsman Tom Chudleigh. Hanging 10-15 feet from the forest floor, the spheres – named Eve, Eryn and Melody and crafted from yellow cedar, Sitka spruce and fiberglass respectively – are secured to the surrounding trees via a system of ropes and accessed by suspension bridges. 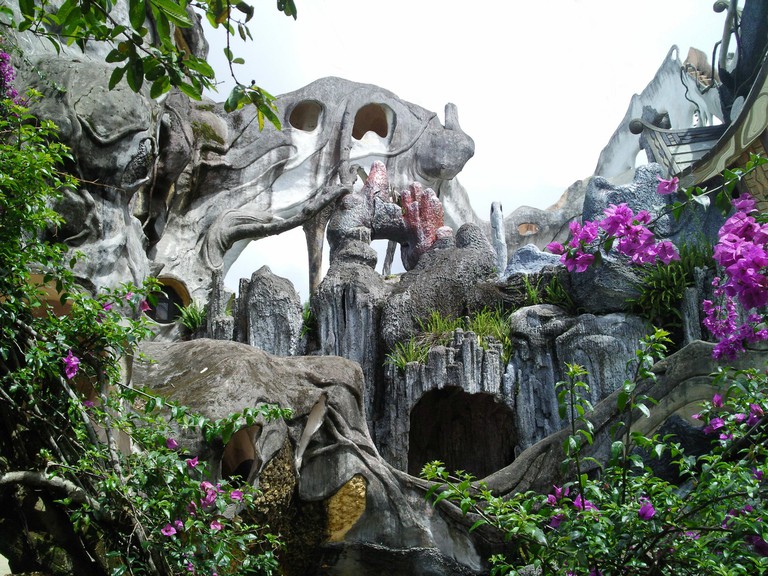 Hang Nga Villa, Vietnam | Courtesy Hang Nga Villa
The vision of Vietnamese architect Dr. Dang Viet Nga, the Hang Nga Villa – a trippy hotel in the heart of Dalat City sculpted in the shape of a tree and also known as ‘Crazy House’ – is like something out of a fairy-tale. Featuring ten nature-themed rooms (the gourd and kangaroo, to name but two), the hotel clearly takes cues from Gaudi, and like his masterpiece the Sagrada Familia, it remains unfinished, 15 years after construction first began.
Open In Google Maps
3 Đường Huỳnh Thúc Kháng, Thành phố Đà Lạt, Lâm Đồng, 66000, Vietnam
+842633822070
Visit Website
Give us feedback

Located within the bounds of the Hulio-Hulio Biological Reserve, a private nature reserve and ecotourism project in Chile’s Patagonian rainforest, the Montaña Mágica Lodge is an enchanting volcano-shaped, moss-covered retreat accessed by a wood and rope bridge and boasting its very own waterfall. Comprised of 13 cozy, welcoming rooms, Montaña Mágica Lodge also makes a great base for exploring the natural beauty and wildlife of the surrounding reserve. 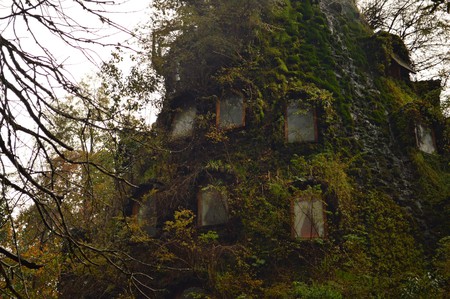 Between 1967 and 1996, the Harlingen Harbor Crane was a regular shipyard crane that spent its days lugging timber freight from Russia and Scandinavia – that is, until 2003 when it reopened after a two-year renovation as a unique luxury hotel. Its stylish cabin, the crane’s former machine and control rooms, is located 17 meters above the docks and features a stunning rooftop patio offering panoramic views out over the port of Harlingen. 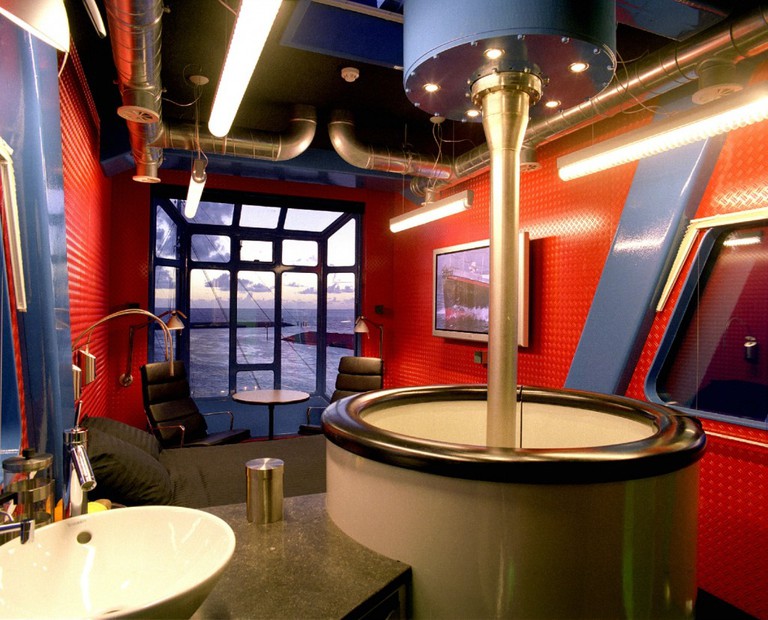 The world’s first hotel constructed entirely of ice and snow, ICEHOTEL – located in Jukkasjärvi in Sweden’s northernmost reaches – was founded by entrepreneur Yngve Berqvist in 1989 and it’s an idea that’s been mimicked in equally cold locations across the globe including Quebec City and Finland. Each summer the hotel melts and each winter it’s reconstructed using ice from the neighboring Torne River with newly themed suites. 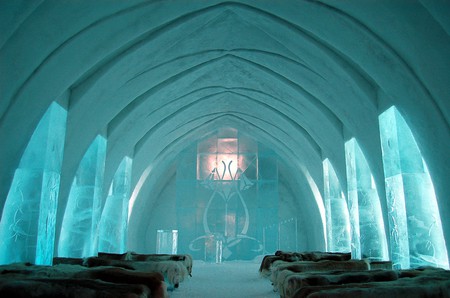 The Underwater Room at The Manta Resort

Resort, Hotel
Facebook
Email
Twitter
Pinterest
Copy link
Share
Map View
Tanzania’s beautiful Manta Resort is home to a very unique space among its more orthodox rooms and villas – The Underwater Room. Anchored off the coast of Pemba Island above a coral reef in the Indian Ocean, the floating hotel features three levels including a landing deck and rooftop lounge area perfect for sunbathing and stargazing, but the real marvel is its underwater bedroom where guests can spot tropical sea creatures like batfish and Spanish dancers.
Open In Google Maps
Psv-zanzibar Estate, Pemba North Region, Tanzania
+255776718852
Visit Website
Give us feedback