11 Places in and Near Stockholm Perfect for Food Lovers 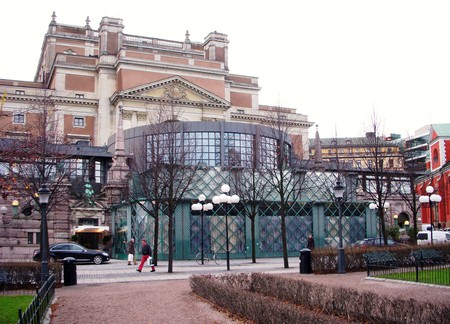 Stockholm is one of the food capitals of Northern Europe, with a plethora of excellent restaurants to suit all budgets. In fact, one of the few issues when dining out is that there are so many great places to get excellent food, it can be hard to choose where to go. To help you out, we look at some of the best areas in Stockholm for foodies to explore, as well as some places that are slightly further afield if you want to get out of the city centre.

Östermalm is truly the style capital of Stockholm, with the area containing many of the city’s most chic boutiques, upmarket bars and excellent eateries. There are a number of restaurants all clustered around Östermalmstorg subway station that are exceptional. This is especially true of Gastrologik, Volt, Operakallaren, Matbaren and Ekstedt, which all hold Michelin stars. If you appreciate carefully designed menus, created with real care, then any of those five options will delight you. If you are looking for something a little more wallet-friendly, Östermalms Food Hall is absolutely excellent for a quick bite or a sit-down meal at one the many restaurants located in the food hall. Östermalm is food heaven.

Slightly further north of Östermalm is the metro station Odenplan, and there are many great restaurants in its vicinity. The pizzeria 800 Grader was chosen as Stockholm’s best cheap restaurant by newspaper Dagens Nyheter last year, while Low and Slow Smokehouse is a great barbecue restaurant that brings a taste of the American south to the cold Nordic north. Also a short walk from Odenplan is Esperanto, a Swedish–Japanese fusion restaurant that picked up a Michelin star in 2017, as well as another Michelin star holder, sushi restaurant Imouto. 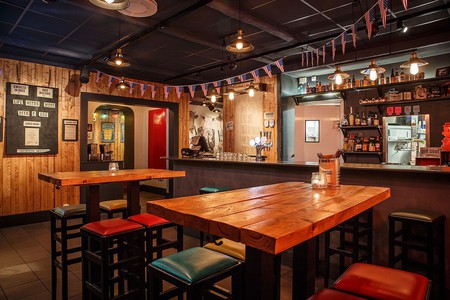 The island of Södermalm is widely regarded as the most trendy of Stockholm’s islands, and the area below Folkungagatan, commonly known as So-Fo, is seen as the epicentre of Stockholm cool. There are some great places to grab tasty but also reasonably priced food. Nytorget 6, located in a square of the same name, is one of the top restaurants in the area and is complemented by Meatballs for the People and the super Japanese restaurant Blue Light Yokohama. If you are looking for a more relaxed environment than Östermalm or Odenplan, So-Fo is ideal.

The island of Kungsholmen is utterly stunning and feels like a world away from the buzzing centre of Stockholm, which is only minutes away by metro. One of the metro stations, Radhuset, is within walking distance of many of the island’s best eateries. Kitchen and Table is a great New York-style Swedish restaurant, AG has some the city’s best dry-aged steaks and Dogfood serves up hipster hot dogs that are a cut above your regular hot dog. 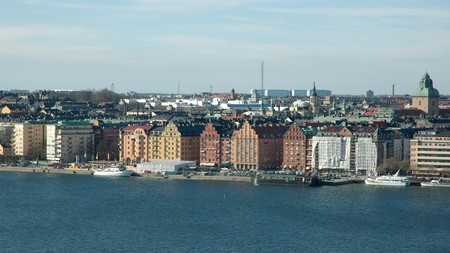 Kungsholmen is a beautiful part of town | © Sigurd Gartmann / Flickr

Skanstull is in Södermalm but not within the So-Fo area, and it is well worth exploring if you want a great meal. There are a number of high-quality places, but one, Teatern, stands out in particular. It is a food court but with a twist; rather than being filled with cheap fast-food places, it has a number of superb small restaurants, all serving great food at wallet-friendly prices. From pizza to ramen to seafood and tacos, if you go in a group you will all be able to find something you enjoy.

Stockholm’s old town, Gamla Stan, can be a bit of tourist trap, but there are some restaurants that are fantastic and are in beautiful settings down windy cobbled streets. The Hairy Pig deli serves up lovely tapas with many different excellent salamis cured in house, Kryp In serves great Swedish food in a cosy atmosphere, Fem Sma Hus serves great dishes in a 17th-century cellar and The Golden Peace does gourmet food right, with a great selection of dishes all made to perfection. If you want something a little more modern, Pubologi has a real hipster bistro feel, as well as a brilliant beer menu. 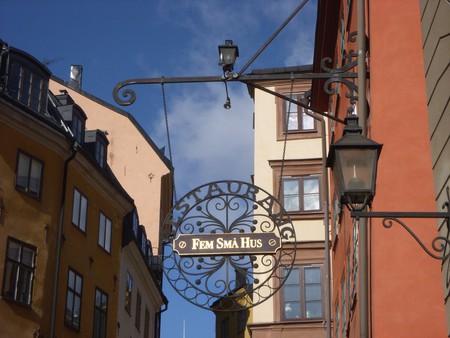 Fem Sma Hus is a great place to grab some food | © Holger.Ellgaard / WikiCommons

Slightly further out of town is Angby, a lovely part of Stockholm that features the city’s first nature reserve, Judarskogens. There are a couple of great places to eat in Angby while you enjoy the beautiful nature in the area, with Astrid’s Kok being the most headline-grabbing. They serve a great range of northern Swedish food, with their meatballs and ox cheeks being particularly notable. China House is an excellent Chinese restaurant.

Also outside of the centre but still within the city of Stockholm is the island of Djurgarden, which is dominated by a huge park right in the centre of the island. It has two restaurants that encourage people to hop on the ferry from Slussen metro station and make their way across the water. Oaxen Krog, as the only place to hold two Michelin stars, is arguably Stockholm’s best restaurant. It is a truly stunning restaurant with a passion for providing unforgettable experiences for its diners. Also on the island is Rosendals Tradgard, which serves up organic food, with much of its produce coming from their own greenhouse. 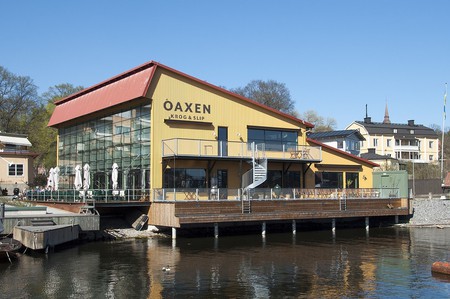 Oaxen Krog is right on the water | © I99pema / WikiCommons

If you are willing to go right out of the city and into the archipelago, there are a number of beautiful islands to explore, with some lovely places to eat. Vaxholm is best known for its island fortress, which brings a large number of visitors to the island. The main part of the island is called Vaxon and features some especially great places to eat. One, Flow, does both Sushi and Thai food, while Melanders has some of the best seafood in the archipelago. Best of India is great for authentic Indian, while Sushi Ika always gets rave reviews.

Another island out in the archipelago, Lidingo is one of the bigger islands and thus has plenty of places to eat. One of the best is Pier 16, a hotel whose restaurant has brilliant Italian food – their pasta is really exceptional. Also very good is Bryggan, which has great seafood as well as a superb mushroom risotto. If neither of those places sound to your liking, then try 450 gradi and their Neapolitan-style pizzas. 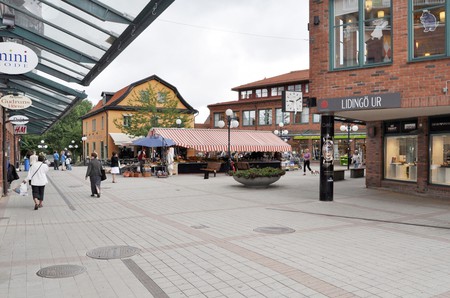 One of the most beautiful islands in the archipelago, Fjaderholmarna has a surprisingly wide variety of restaurants considering you can walk from one side of the island to the other in about five minutes. Roda Villan does Swedish and French food, Fjaderholmarnas Krog has beautiful traditional Swedish pies and Rokeriet has excellent seafood. It is well worth hopping on a boat to explore the island, as well as getting some fantastic food.