11 of Stockholm’s Most ‘Mysig’ Spots

How a mysig place should make you feel | © David O'Hare / Flickr
As winter descends on Stockholm and residents begin to spend more and more time inside, the search for a ‘mysig’ (cosy) spot begins. First, as autumn comes in, signs begin to spring up advertising a ‘hostmysigt’ (autumn-cosiness) atmosphere, next it’s ‘julmysigt’ (Christmas-cosiness) and finally ‘vintermysigt’ (winter-cosiness). ‘Mysig’ can be translated to ‘cosy’ – but it’s so much more than that for Swedes.

It is relatively similar to the Danish idea of ‘hygge’ – that perfect combination of a comfortable space with a feeling of calmness and warmth. It’s a bit like that feeling you get when you’re in front of a fire; warm and relaxed. Or the sense of joy from having fun with your friends.

A drink can be mysig, a blanket can be mysig, a meal can be mysig and a place can absolutely be mysig. As the days grow darker, Swedes flock to spots in Stockholm that can offer this feeling. They don’t necessarily have to be small or old-fashioned, they just need to give you that sense of happiness and ease. Here are our favourite spots.

Awarded the crown of Stockholm’s best cheap restaurant by newspaper Dagens Nyheter, 800 Grader is one of Stockholm’s premier pizza places. Located in the northern part of the city right by Odenplan t-bana station, 800 Grader prides itself on creating simple but delicious wood-fired pizzas. The name means ‘800 degrees’ because that is the temperature their pizzas are baked at, and the restaurant is very welcoming and convivial. With three long tables inside, everyone sits together and, as the kitchen is open, you can see your food being made. There is nothing quite as satisfying as a warm delicious pizza when the snow is falling outside.

Ma Baker is a quaint café in Southern Stockholm and it derives its mysigness from the fact that it feels like a real community spot. It’s in the main square in the small district of Karrtorp and one of the first things you notice as you walk in is a cabinet filled with mugs reserved for people who come in regularly. During the day they serve all manner of warm drinks, as well as freshly baked bread and other sweet treats. Often you’ll be able to see them making the baked goods in their open kitchen. On Thursday and Friday nights they stay open until late and serve tapas along with beer and wine. 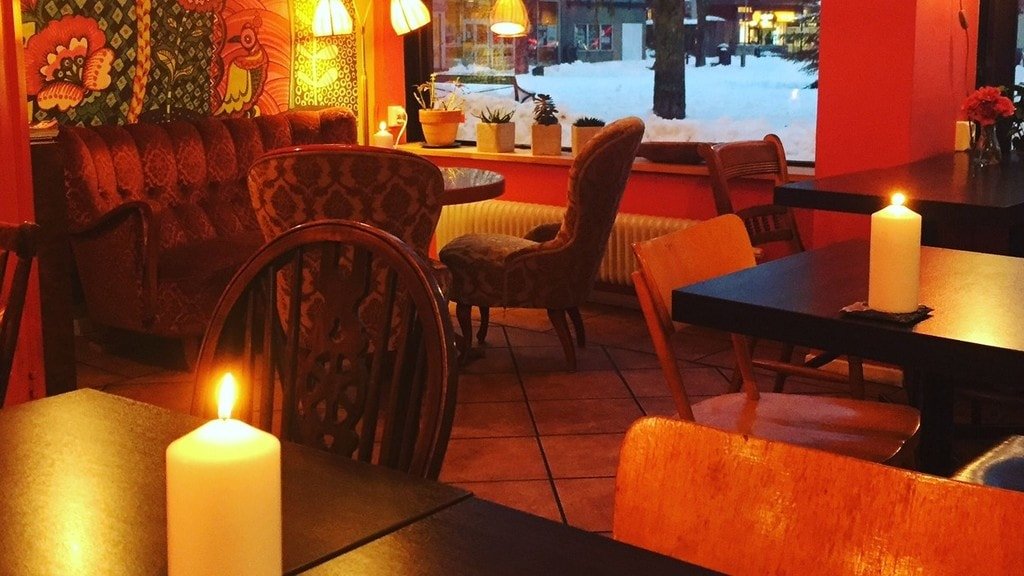 Knut is a restaurant and bar that predominately serves classic Northern Swedish food, which is perfect for a warming winter treat. They have delicious cauliflower soup, lovely moose steak and even braised leg of reindeer, all of which can help warm you up and fight the winter blues. The dining area, with its eclectic mix-and-match furniture, feels as much like a home as it does a restaurant, giving it a special and cosy atmosphere. It’s also right in central Stockholm, making it easy to find and get to by public transport.

Boutique Hotel, Hotel
Hotel Rival, Stockholm | Courtesy of Hotel Rival
Partly owned by Benny from ABBA, this hotel is a great spot to blow out the winter cobwebs, either as a guest or if you just want to pop in for a meal or a drink. It’s in Mariatorget, one of the most beautiful and charming squares in Stockholm. The hotel bar is bright, colourful and often bustling with Stockholmers escaping the dark nights. The rooms also share this light and airy feel, which can help you feel a peaceful calm that can often be hard to find in major cities like Stockholm. It’s a great place to meet up with friends and get that mysig feel.
More Info
Open In Google Maps
3 Mariatorget, Södermalm Stockholm, Stockholms län, 118 48, Sweden
+46854578900
View menu
Visit website
Visit Facebook page
Send an Email
Give us feedback

An appealing neighbourhood bar just up the road from Hotel Rival, Morfar Ginko means ‘Grandfather Ginko’ and it certainly feels like the kind of place where friends become family. The fact that it’s not the biggest place, coupled with its regular events like quizzes, make it a place very conducive to meeting people and leaving with more friends than when you arrived. When you enter Morfar Ginko you can sense it’s a place where you can relax and be yourself.

Hotel
The charming exterior of the Lady Hamilton Hotel | © Mikel Ortega / Flickr.
A hotel less than a minute away from the Royal Palace, the Lady Hamilton is designed to be a tranquil and intimate place that transports you back to historical Sweden. Each room comes with a traditional Swedish painting from Dalarna, (a province in central Sweden), as well as a cupboard with the traditional Swedish drink aquavit inside. The hotel is furnished throughout with gorgeous antique furniture once owned by the Bengtsson family, who used to reside in the building. It’s the perfect cosy refuge from a cold winter night.
More Info
Open In Google Maps
5 Storkyrkobrinken, Södermalm Stockholm, Stockholms län, 111 28, Sweden
+46850640100
View menu
Visit website
Visit Facebook page
Send an Email
Give us feedback

Stepping into Indigo is like stepping into a friend’s living room rather than into a trendy bar in Stockholm’s Sodermalm. It’s a cosy and comfortable spot for drinks, with a relaxed and friendly atmosphere. They serve excellent cocktails as well as play great music. It’s also set just off one of Stockholm’s busiest shopping streets, Gotgatan, so you can grab a cosy new jumper and then enjoy the warmth of Indigo’s lovely staff to multiply the mysigness quotient.

Skroten is a rather rare combination of a café and a boat shop. Located on the beautiful island of Djurgarden, both its food and its décor give it the kind of feel that makes it a mysig spot. Inside, the interior is decorated with a variety of different nautical items, with life jackets hanging from the ceiling, lights from old ships on the shelves and vintage furniture. It doesn’t feel like any other café in Stockholm. The menu includes hearty and warming soups, as well as hot, baked treats. 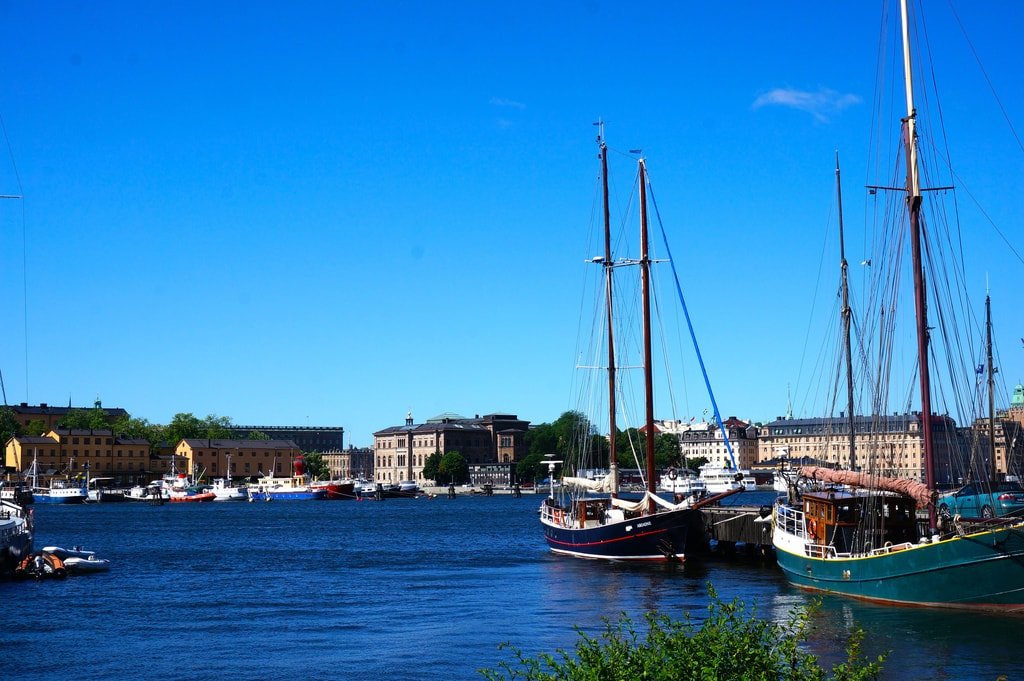 Skroten is on the beautiful island of Djurgarden | © Rebecca / Flickr.

Bar, Swedish, $$$
The name very much reflects the kind of fun and lighthearted atmosphere inside this craft beer café,which prides itself on its impressive selection of different brews. Situated in leafy Kungsholmen, Folk and Friends also serves delectable pies, which act as a wonderful winter warmer, as well as good coffee. In addition, there is a fun selection of board games to help you and your friends pass the time while enjoying a drink.
More Info
Open In Google Maps
32 Norr Mälarstrand, Kungsholmen Stockholm, Stockholms län, 112 20, Sweden
View menu
Visit website
Visit Facebook page
Send an Email
Give us feedback

Gamla Stan, Stockholm’s old town, in general is a rather mysig place. Its narrow streets and historical buildings transport you back in time and Fem Sma Hus runs with this theme. Located in a 17th-century cellar and partially lit with candles, visiting Fem Sma Hus is an exquisite dining experience. It serves a mixture of French and Swedish cuisine and even has a banquet room you can rent out. Their winter menu is designed to warm and enliven the palate and help you forget about the cold outside. 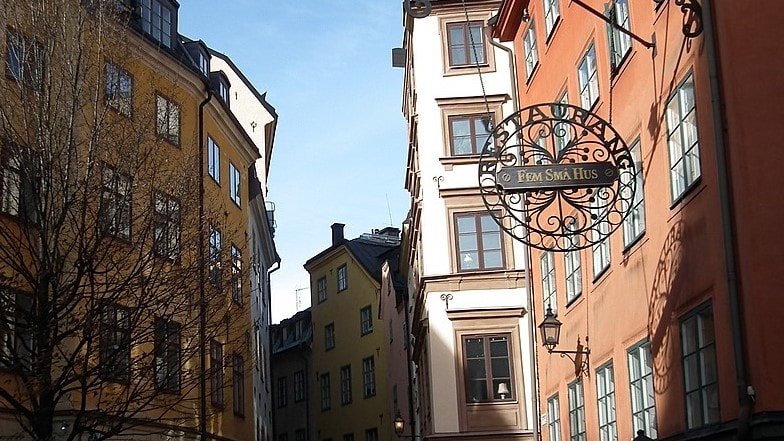 Stepping into a book shop can be like stepping out of the real world and into a special place filled with exciting and enjoyable opportunities for escapism. Certain book shops can enhance this, making it feel as if you’re looking through someone’s personal collection rather than into an overly organised and purely commercial enterprise. Alfa Antikvariat has shelves overflowing with different books, with all kinds of little nooks and crannies to explore. It has books in a variety of languages and you can always call beforehand to check their stock, if there is a particular item you would like. It’s the kind of place you can go into for five minutes and happily still find yourself in two hours later.