Bengans is one of the best-known record shops in Stockholm and Gothenburg | © Ankara/WikiCommons
Vinyl records have become a real topic of discussion in recent years. The old format has gone through an impressive and noticeable revival, with many new albums being put on vinyl—as well as a number of reissues of classic ones. For some people this is fantastic—this is how music is meant to be heard. For others, it is a pretentious waste of money for music snobs, who pretend to hear an imaginary difference between vinyl and CD. Whichever side you are on, Stockholm has embraced the trend and has a number of fantastic vinyl shops. These are ten of the very best Sweden’s capital has to offer.

Shop, Store
Look out for the Vinyl Kampanj section for deals at Bengans | © Tom Woodward/Flickr
Bengans is right in the center of the city and is one of the largest and most popular record shops in Stockholm. It has two branches in Sweden’s second biggest city, Gothenburg, having first opened there over 40 years ago. Their website is excellent and a great way to check what they have before visiting the shop. They have over 1,000 different vinyls and CDs in their collection, and they usually have a number of crates stacked with discounted vinyls. If you are looking for somewhere to while away an hour and browse, then Bengans is perfect.
More Info
Open In Google Maps
20 Drottninggatan, Norrmalm Stockholm, Stockholms län, 111 51, Sweden
+4687231546
View menu
Visit website
Visit Facebook page
Send an Email
Give us feedback

Store
The best store in the city for fans of all things blues music, Smokestack is hopelessly devoted to having the best blues, rock ‘n roll, and soul music in their store—in the Northern part of the city. It is a little bit out of the way if you are just looking for a place to flick through records, but if you are aiming to find a specific blues record then it is well worth the trip. As with any group of passionate people, the staff at Smokestack are wonderfully knowledgeable and helpful.
More Info
Open In Google Maps
9 Tallhammarsvägen, Vallentuna, 186 33, Sweden
View menu
Visit website
Visit Facebook page
Send an Email
Give us feedback

Shop, Store
Stockholm has a great selection of vinyl stores | © Tomasz Sienicki/WikiCommons
Record Mania is one of Stockholm’s best record shops for people looking to sell their vinyl. Their website displays an updated list of all their wants, so you can always know if they are looking for something you are selling before you contact them. While they are wonderful at buying records, they are also great when you want to shop for vinyl, as they have a large collection. They are passionate about vinyl and it shows.
More Info
Open In Google Maps
2 Östgötagatan, Södermalm Stockholm, Stockholms län, 116 25, Sweden
+4687442494
View menu
Visit website
Visit Facebook page
Send an Email
Give us feedback

One of the coolest record shops in all of Stockholm in one of the city’s coolest locations, the island of Sodermalm is hipster central, so it is no surprise that there are many fantastic record shops there. Pet Sounds sells both new and used vinyl with a great range that covers the vast majority of genres. Their Swedish music collection is particularly notable. They often hold events and signings so make sure to check out their Facebook for listings. It is reportedly one of Quentin Tarantino’s favorite spots in the city.

Shop
Stockholms Serie & Skivhandel, Stockholm | Jobr5639/WikiCommons
Tucked away on one of Stockholm’s busiest streets, Sveavagen is Stockholm’s Serie & Skrivhandel, which sells both vinyls and comic books. It looks tiny from the outside, but when you get in, you realize just how deep and varied their collection is. On top of vinyls and comics, they also have DVDs, VHS, and even autographs to buy. If you have some old vinyls that you want to get rid of, they may also buy it. Going inside feels like going into someone’s house rather than a shop, as it is both charming and cozy.
More Info
Open In Google Maps
104 Sveavägen, Norrmalm Stockholm, Stockholms län, 113 50, Sweden
+4686129795
View menu
Visit website
Visit Facebook page
Send an Email
Give us feedback

An Ideal for Living

Shop
Named after the first EP of seminal British band Joy Division, An Ideal for Living oozes cool and is one of the cities most well-curated stores. Vinyls are just part of its offering, which also includes vintage design items and jewelry. When you first walk into the shop, it seems a little small, but as soon as you go downstairs, you realize it is a treasure trove of a place, with the chance to pick up some cool records. It is well worth visiting.
More Info
Open In Google Maps
19 Södermannagatan, Södermalm Stockholm, Stockholms län, 116 40, Sweden
+4686429003
View menu
Visit website
Visit Facebook page
Send an Email
Give us feedback

Open since 1984, Record Hunter does not pretend to be the flashiest or most glamorous of stores—rather, it prides itself on being a place that values substance over style. Their collection is near unrivaled, as is their desire to please customers. They are happy to take requests for rare vinyls and then they work tirelessly to find them. They have traveled to the United States and across Europe to find special vinyls. You can feel the commitment and passion the second you step in. 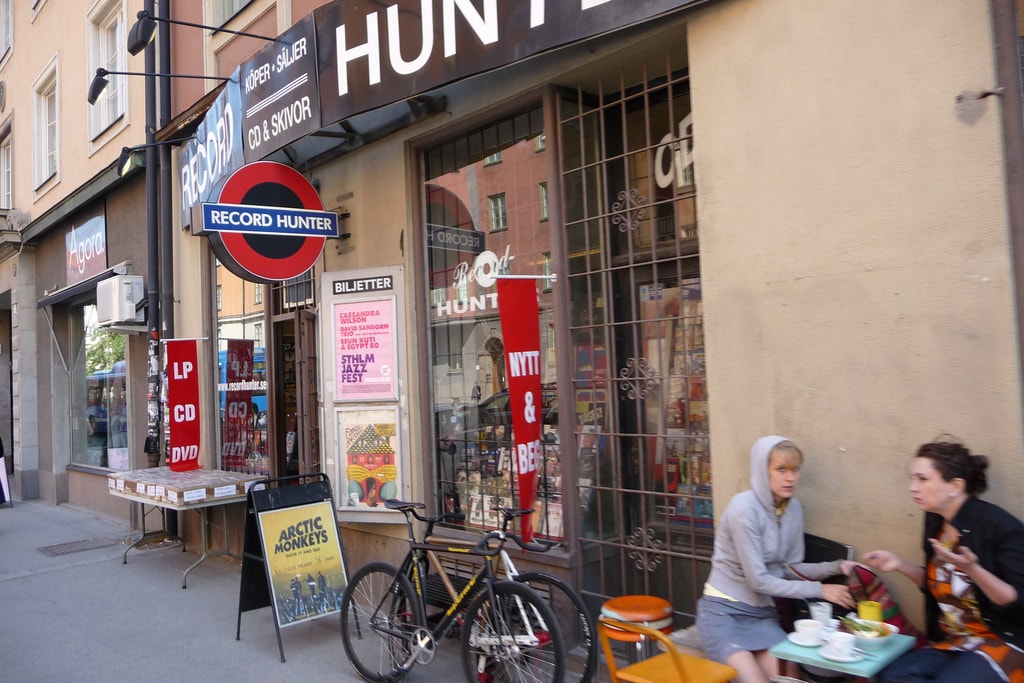 Store, Shop, Music Venue
Gamla Stan is Stockholm’s Old Town, so it is appropriate that it has one of the city’s best shops for a format as old as vinyl. Plugged have a huge collection of vinyl in every genre you could want, both new and used. Much like Bengans, it has a brilliant website where you can examine what they have before you visit. Plugged also has great concerts in its store, with many of Stockholm’s best up and coming artists appearing there.
More Info
Open In Google Maps
45 Stora Nygatan, Södermalm Stockholm, Stockholms län, 111 27, Sweden
+468319115
View menu
Visit website
Visit Facebook page
Send an Email
Give us feedback

Market
Some of the great vinyl on show at Hötorget | © Hungarian Snow/Flickr
Hötorget is home to a superb open-air fruit and vegetable market from Monday-Saturday, but on Sundays it transforms into a brilliant flea market, which often brings vinyl sellers to the center of the city. The quality can vary week to week but there is nearly always at least one vinyl seller there—as well as other great market stalls, which sell all manner of items. If you want more than just vinyl and the buzzing atmosphere of an outdoor market, then this the flea market to check out.
More Info
Open In Google Maps
Hötorget, Stockholm, 111 57, Sweden
View menu
Visit website
Visit Facebook page
Send an Email
Give us feedback

Shop, Store
The name of this store can be translated as “Nostalgia Palace,” so if you are looking for music from the ’50s to the ’80s, then this is the record shop for you. It sells almost exclusively used records and you can get everything from bargain buys to rare collectibles. Alongside vinyls, they also sell vintage toys and movie posters. The staff know the store inside out, so you can always give them a call to see if they have something special before you go. With its massive selection of vinyl, it is a great place to spend hours browsing.
More Info
Open In Google Maps
101 Sankt Eriksgatan, Norrmalm Stockholm, Stockholms län, 113 31, Sweden
+468340061
View menu
Visit website
Visit Facebook page
Send an Email
Give us feedback
Give us feedback