Stockholm has number of great places to get a hot dog | © Pixabay
There are a number of fantastic healthy eating places in Stockholm and it is a city that loves a good salad, as well all manner of different pickled vegetables. However, there is a less healthy item that many Stockholmers could not live without—the humble hot dog. This means that there are a number of places in the city that provide excellent and high-quality hot dogs. There are humble gatukoks (street kitchens) spread out across the city where you can grab a grilled or broiled hotdog that will match up against any other food you can get in Stockholm. Here are ten of the best places to grab a hotdog, whether its 2 a.m. on a Friday night or 10 a.m. on a Monday morning.

Restaurant, Food Kiosk, Swedish, Fast Food, Street Food, Vegan, Vegetarian, Gluten-free
The classic Arengrillen | © Anders Wandahl/WikiCommons
This is a classic Stockholm gatukok located right at the entrance to the beautiful Tessinparken in Stockholm’s Ostermalm. Arengrillen is a simple kiosk which often has small tables outside so you can sit down while you enjoy your hot dog. They have all different variations to enjoy, so you can have a hot dog with fries or mashed potato and with or without bread. They even do a French hotdog, where you get your sausage in half a baguette with mayonnaise. If you want to try a classic Stockholm kiosk while also experiencing one its most lovely parks, then this place is perfect.
More Info
Open In Google Maps
42 Erik Dahlbergsgatan, Östermalm Stockholm, Stockholms län, 115 57, Sweden
+4686671990
View menu
Visit website
Visit Facebook page
Send an Email
Give us feedback

If regular hot dogs just can’t cut it for you then Harakiri korven helldog is the place for you. They have both a shop and a van from which they sell a range of exciting and unusual hot dogs that are famed for their intense flavors and heat. It is a place to go if you want something a little different and more exciting than a regular gatukok. In fact, they have the world’s hottest hot dog that was once served at the Nobel Prize banquet—quite an honor for the humble hot dog. You can find them in Gamla Stan, Stockholm’s old town. Just remember to buy a drink to soothe your mouth!

Not strictly a hot dog stand, Pressbyrån is rather a massive chain of convenience stores which sell everything from magazines to toothbrushes to milk. For many though, their most exciting offering is their hot dogs, which are a feature of every one of their stores. If you want a hot dog on the way back from work, before a trip on the metro, or if you would just like to pick up a pint of milk and a hot dog at the same time, then Pressbyran is the place to go. They have a wide range of hot dogs including vegan hot dogs, chicken hot dogs, and el diablo—a spicy sausage. At Christmas you can even get one where the bread is replaced by a saffron bun, a classic Swedish yuletide treat. 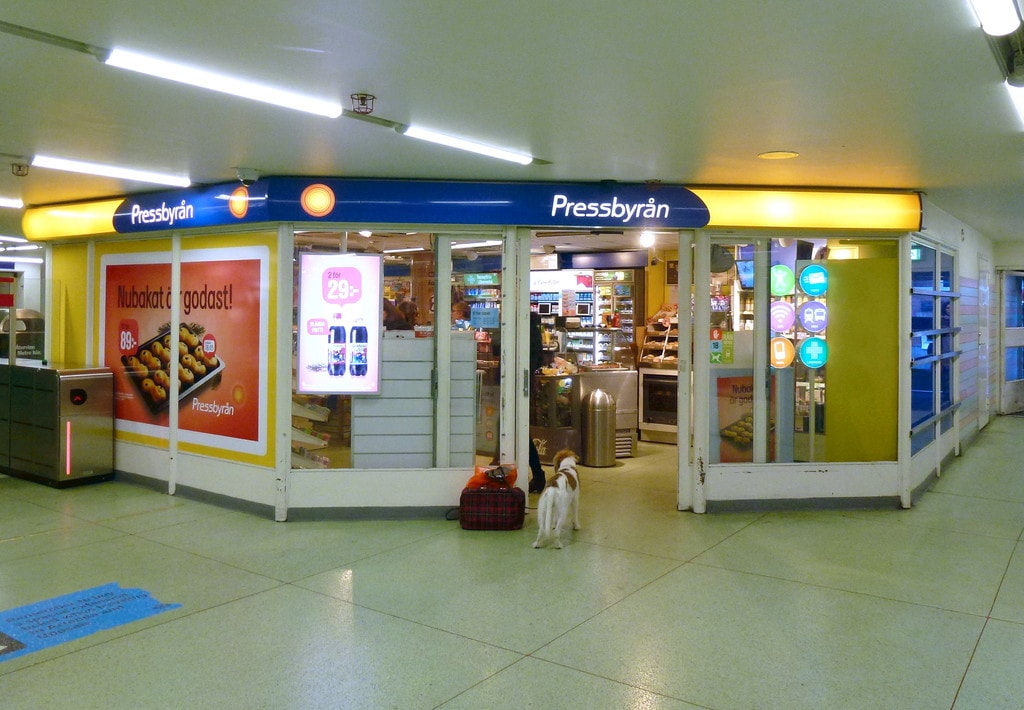 “Grandma’s little kitchen” is located right by Stockholm’s South Station in hipster Sodermalm and it serves a range of different foods, including hot dogs. It is a charming little shop with a window you can order at if you are in a rush. It has great hamburgers, as well as a range of vegetarian options, but it is their hot dogs which are the real stars. They have a lunch offer where you can pick up any of their hot dogs and a drink for a very reasonable price as well as gluten-free bread for any coeliac who still want to enjoy a good dog.

Food Kiosk, Restaurant, Swedish, Fast Food, Street Food, Vegan, Vegetarian, Gluten-free
Torggrillen's unmissable blue exterior | © golonka66/WikiCommons
Placed slap bang in the center of the city, Torggrillen is situated right by Stockholm’s concert house, where some of Northern Europe’s best classical music can be heard. If you are looking for the ultimate culture clash, then attending a performance by the Stockholm Philharmonic and following it with a grilled hot dog and mashed potato is perfect. The kiosk itself is big and blue and very hard to miss. Alongside hot dogs, it also sells grilled sandwiches and fries, if you are in the mood for something else. Don’t expect gourmet food, but if you just want a classic grilled hot dog, few places are better.
More Info
Open In Google Maps
12A Hötorget, Norrmalm Stockholm, Stockholms län, 111 57, Sweden
View menu
Visit website
Visit Facebook page
Send an Email
Give us feedback

As with Grandma’s little kitchen, Bruno’s Korvbar is in Sodermalm and has a superb range of different sausages to delight in, and its colorful owner, Bruno, is one of the main reasons to go. He is always happy and clearly loves what he does, which somehow makes the food taste even better. You can get all different varieties, from beef to pork to chicken, as well as a handful of vegetarian options. It is a shop, as opposed to a stand, but it is so small that you will likely have to find somewhere outside to eat it.With the lovely Mariatorget square just minutes away, the perfect place to enjoy it is just around the corner.

Stadium
A great view to see when eating a hot dog | © WikiCommons
This is a bit of a cheat but it just has to be on the list. Friends Arena is the national stadium of Sweden and every single kiosk at the venue sells hot dogs. There is something very Swedish about going to Friends, watching a football match, and enjoying a beer and a hot dog. There are also concerts and local football team AIK use Friends as their home stadium but it is the Swedish national team matches that always fill the stadium and are well worth attending. The hot dogs on their own are nothing to write home about, but somehow, combined with the atmosphere of the stadium, they suddenly taste far better.
More Info
Open In Google Maps
1 Råsta Strandväg, Råsunda Solna, Stockholms län, 169 56, Sweden
+46850253500
View menu
Visit website
Visit Facebook page
Send an Email
Give us feedback

Günter prides himself on having a variety of hot dogs from all around the world in his small little kiosk—in fact, he has twenty-five different countries covered on his menu, including Argentinian chorizo, Hungarian kabanos, and German wurst. Günters is a classic neighborhood place that has both regulars and people just passing by. It is up in the north of the city near Vasaparken, giving you a great place to enjoy your hot dog. All of his hot dogs are 42 centimeters, which is over a foot long, making them of excellent value.

Ostermalm is known for being one of the more upmarket areas of Stockholm, so Ostermalm Korvspecialist’s simple street kitchen might seem out of place, but is has been around since 1992 and is both family owned and well known. It was listed in a book called 100 for 100, about places chefs like to eat at. They work with Bruno’s Korvbar and have become sister shops, meaning what you can get at one place you can usually get at the other. Ostermalms Korvspecialist make their own secret sauces and sauerkraut, which people always rave about. 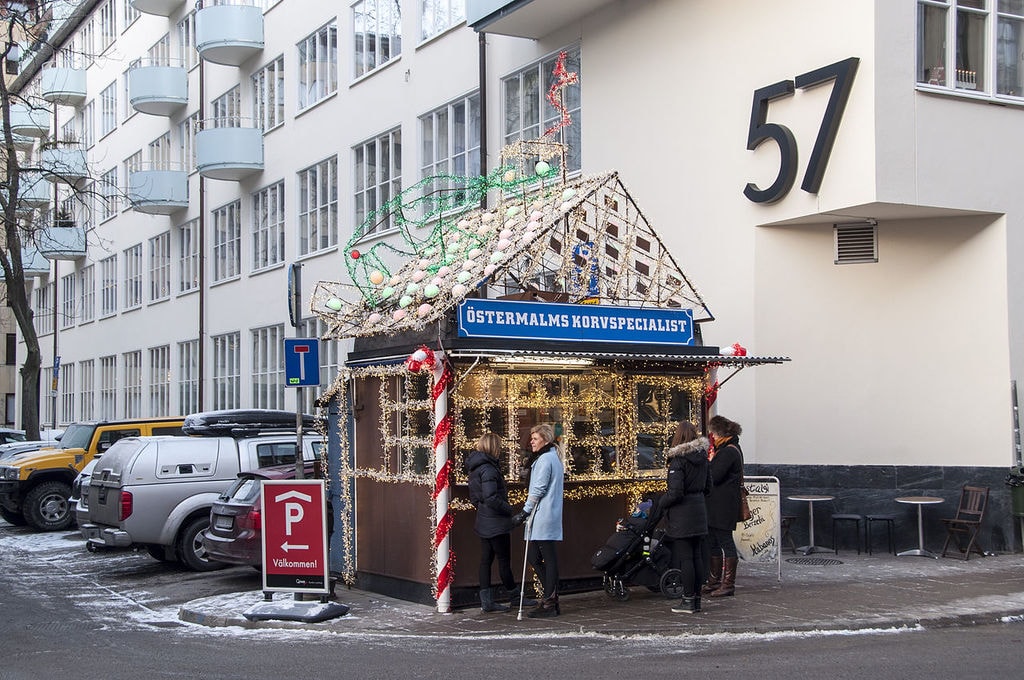 Restaurant, Swedish, Fast Food, Street Food, Vegan, Vegetarian, Gluten-free, Dessert, $$$
A restaurant rather than a stand, it delivers an exciting menu in a cool and relaxed setting, ensuring that the food matches the vibe, which is unpretentious but still interesting. They have six different hot dogs, all with different toppings and different sausages. They even have a dessert hot dog, which is ice cream served in a grilled hot dog bun with caramel sauce. So if you are looking for a something a little more upmarket than a kiosk, Dogfood is ideal.
More Info
Open In Google Maps
63 Luntmakargatan, Norrmalm Stockholm, Stockholms län, 113 58, Sweden
View menu
Visit website
Visit Facebook page
Send an Email
Give us feedback
Give us feedback