Where to Head for the Most Spectacular Views in Tarifa, Spain 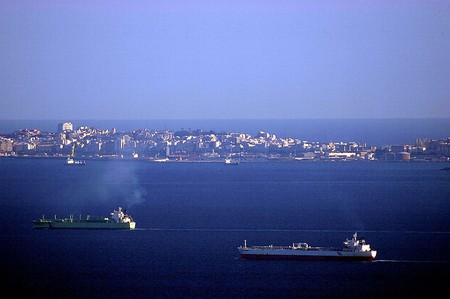 Given its location on the southermost tip of continental Europe, just 15 km (9.3 miles) from the north African coast, Tarifa is not lacking in places with amazing views. Read on for our pick of the best of them.

Here’s where to head in and around Tarifa for the most spectacular views, from the ramparts of its 10th-century Moorish castle to the top of its soaring sand dunes.

Occupying the highest point in Tarifa is the 10th-century Castillo de Guzman el Bueno (Castle of the Guzman The Righteous). From its chunky ramparts – impressively unscathed, given their battle-scarred history – you can enjoy an uninterrupted view over the Strait of Gibraltar to the north coast of Africa. The castle takes its name from Alfonso Perez el Guzman, who sacrificed his son to save Tarifa from a Moorish siege in 1294.

Tucked away behind the beachfront promenade of Plaza Miramar is Plazuela del Viento, the most spectacular mirador (viewing platform) in Tarifa’s old town. To the north, the quarter’s tightly-packed rooftops spread out beneath you, whilst to the south there’s just 15 km (9.3 miles) of ocean between you and Morocco’s Rif mountains. Not for nothing is this called the “Small Square of Wind”, so hold onto your hat as you enjoy the view. 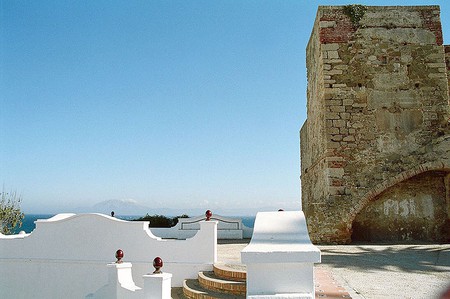 Located 15 km (9.3 miles) north of Tarifa, Playa Punta de Paloma is one of Andalusia’s most unspoilt and beautiful beaches. Its sand dunes rise to heights of over 100 m (328 ft) and some of them have even buried trees. These constantly-changing natural features provide perfect spots from which to enjoy views of the beach itself as well the mountainous coast of Morocco, less than 30 km (18.6 miles) away over the Strait of Gibraltar.

Half an hour’s drive north of Tarifa, near the lovely town of Bolonia, is the Mirador de la Cueva del Moro. Clearly visible (weather permitting) is the northern coastline of another continent – a jagged outline on the other side of the Strait – as well as the Playa de Bolonia, the Baelo Claudia Roman ruins and the dramatic scenery of two natural parks. The road that winds up to the mirador is a little unloved, so cautious driving is recommended. 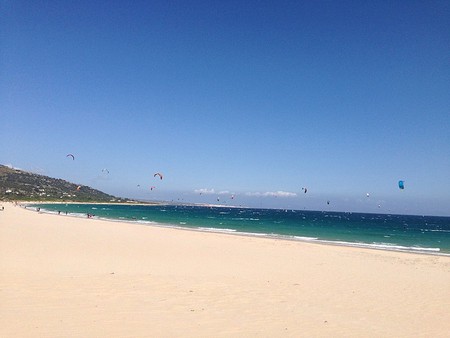 The 300 m (984 ft)-high Mirador del Estrecho is reached by a drive of less than ten minutes from Tarifa. It gives you an incomparable perspective of Morocco’s north coast, with plenty of details visible: on a clear day, you can make out Spain’s north African enclave of Cueta as well as the 842 m (2,763 ft)-tall Jebel Musa, the highest of the Rif mountains. The latter looks so close as to be within swimming distance (probably best not to try, though).

Less than a ten-minute stroll from Tarifa’s old town is Playa Chica. A small curve of white sand just to the west of the port, its sheltered location has made it popular with families and bathers wanting to avoid the strong winds – but there’s another reason people love hanging out here, too. Straight in front of you, across the Strait’s dark blue waters, is Morocco’s Rif mountain range – an arresting reminder of your proximity to another continent. 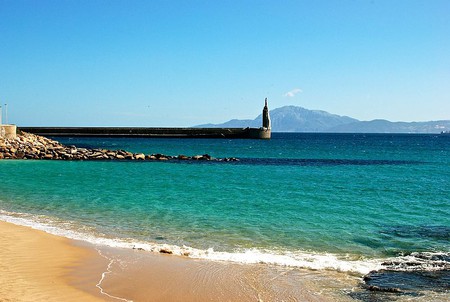 The Colada de la Costa is a coastal hiking trail in the Parque Natural del Estrecho, one of the two natural parks within striking distance of Tarifa (the other is the Parque Natural de los Alcornocales). Extending eastwards from the town for 11 km (6.8 miles) – at which point you reach the Guadalmesi watchtower – it offers some unforgettable views of the north African coast and park’s rugged scenery. Allow about four hours for the 20 km (12.4 mile)-long return trek.