What They're Listening to in Madrid this Summer 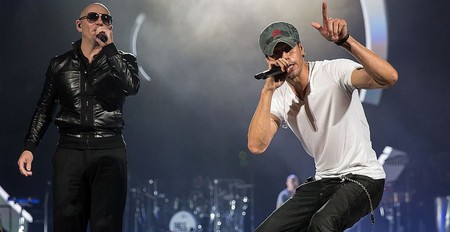 Check out all of Madrid's top hits | © Ralph Arvesen Wikipedia

Although Madrid locals listen to a variety of music, there are several tunes that are currently dominating their playlists. As summer comes around and the weather heats up, expect to hear these tunes in bars, clubs, restaurants and blaring from cars. While English music is popular in Madrid, a selection of Spanish hits are taking over the city this summer. Check out this handy guide to see what they’re listening to in Madrid – so you can start listening too!

This catchy tune is inescapable and is seemingly played nonstop all over Madrid. The original Spanish version performed by Luis Fonsi and Daddy Yankee was already topping Billboard charts, but when the remix added Justin Bieber, Spain went even crazier for the song. It went to number one on the Billboard charts and may stay there all summer long. Start memorising the words now, especially if Madrid is your vacation destination this summer.

It seems like Madrileños are always humming a Shakira tune. For a while it was La Bicicleta featuring Carlos Vives, than it was Chantaje and now it’s Me Enamoré. This upbeat pop tune, with its reggaeton beat in the background, is part of the El Dorado album which was released on May 26th.

Enrique Iglesias is one of Spain’s most famous musicians and – with 150 number one hits across all the Billboard charts – it’s little wonder that Súbeme La Radio hit the top spot on the Latin music charts. Although he’s Spanish, Iglesias has plenty of English-speaking fans and this song is likely to feature heavily on international airwaves as well as being a hit in Madrid. The video was filmed in Cuba and also has some great shots of Havana.

This Calvin Harris collaboration with Frank Ocean and Migos is topping the charts in Spain. Slide is a modern version of 70s style disco tune and one of the only real English songs on this list – so visitors will be relieved to know they can sing along with all the lyrics without having to know the local language!

Another video partially filmed in Cuba, Hey Ma by Pitbull featuring Camila Cabello (from Fifth Harmony) and J Balvin is playing all over Madrid. The song is part of the soundtrack to ‘The Fate of the Furious’, the eighth and newest film in the famous car-racing movie franchise. It’s likely you’ll hear plenty of Pitbull when in Madrid, as the whole city seems to love his music.

Maluma hails from Colombia, but his music is extremely popular in Spain. This latest single is accompanied by a sexy video that stars model Natalia Barulich and famous actor Wilmer Valderrama. The song is a romantic ballad that also has elements of reggaeton.

A little more rock ‘n’ roll than the other songs on this list, Casi Humanos by Dvicio is topping the charts in Madrid. The band became famous in Spain and internationally after their first single Paraíso was a hit in 2014. The soft yet intense vocals of frontman Andrés Ceballos seem to resonate with listeners in Madrid, so check this band out before you head over to visit.