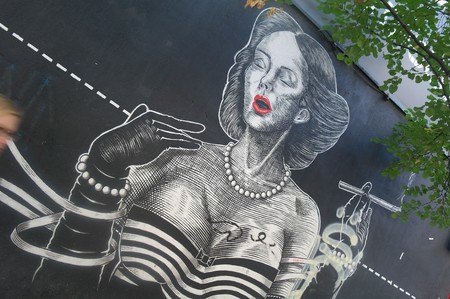 Madrid has no shortage of cool districts, from indie Malasaña to diverse Lavapiés, but there’s a new kid on the block ready to give them a run for their money. Enter triBall, the new ‘in’ place for designers, hip bars and restaurants and an eco-conscious crowd.

TriBall is not a neighbourhood in itself, but a triangle that intersects both Malasaña, to the east, and Chueca, to the west, providing a best of both worlds little area full of interesting places to explore. According to Spanish newspaper El País the boundaries of triBall are Gran Vía, Fuencarral and Corredera Baja de San Pablo. The area is so named because of its triangular shape (tri) and one of its main streets, Calle de la Ballestar. El triángulo de Ballesta became triBall.

Who came up with the name?

Unlike Madrid’s long-established barrios (neighbourhoods) triBall was actually an initiative started by a group of businesses in the area. The idea was to market the triangle as a hip place for shopping and eating out, as well as providing an important regeneration boost to the area around Calle de la Ballestar.

This vintage furniture shop is not all it seems; every evening when the shop closes, it transforms into a rustic bar, where patrons can use the designer furniture and browse the items on offer.

If you’re after a quirky souvenir from Madrid, or some beautiful homeware to glam up your home, look no further than Nest Boutique. It is also one of the only places to stock cards in Madrid (birthday, anniversary etc – Spaniards don’t tend to send cards) so if you have birthdays coming up, stock up here.

This alternative Spanish clothing brand mixes vintage flourishes with a funky modern edge. From 60s-inspired mini-skirts and dresses to Winona Ryder T-Shirts, their pieces are colourful and vibrant with a tongue-in-cheek sense of humour. 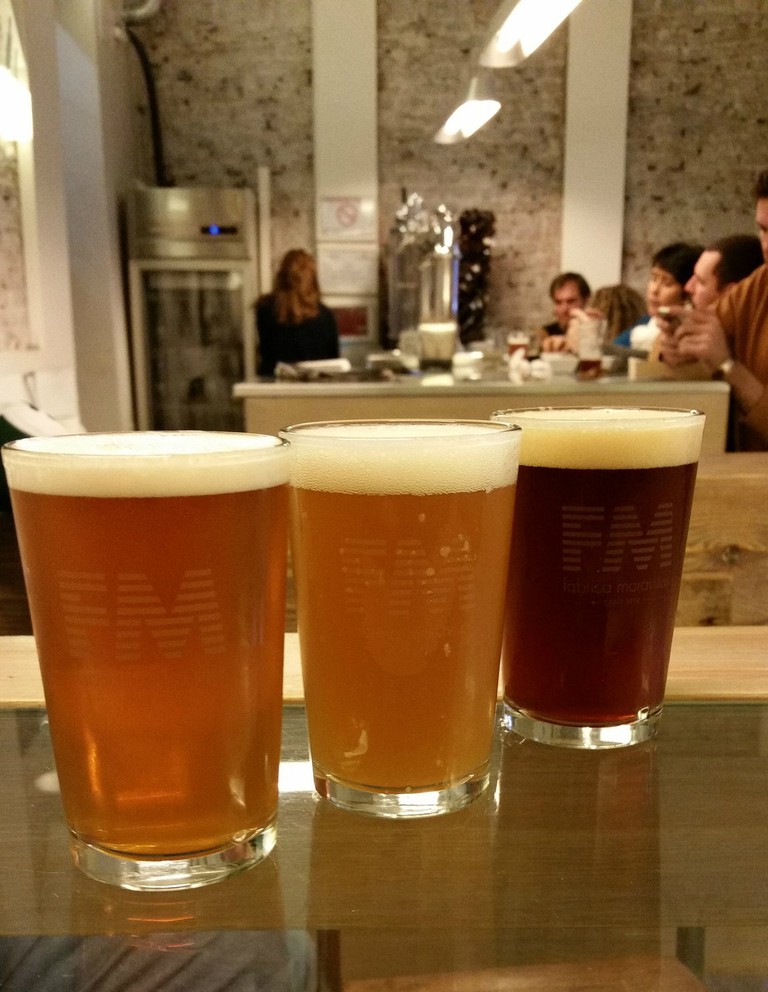 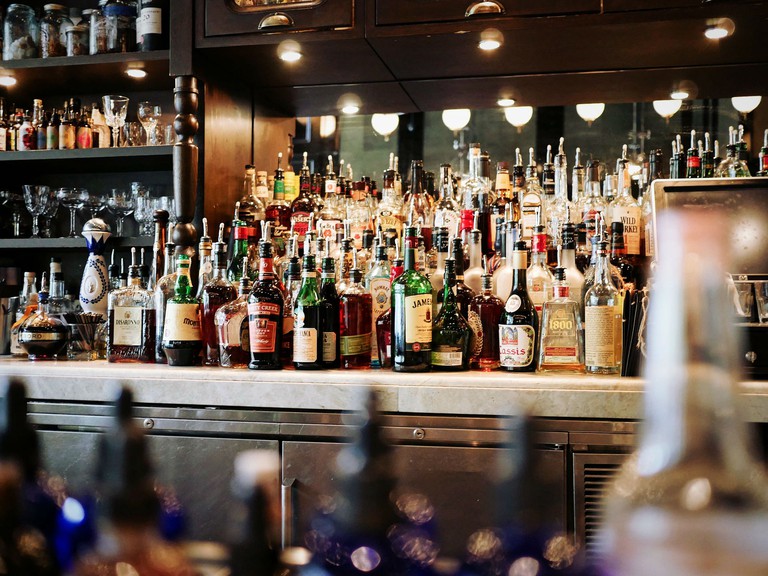 Take your pick at the bar | © Pexels/Pixabay

This café is a firm local favourite and the idea spot, whether for a laid-back breakfast, afternoon beers or late night cocktails. The vintage decor will have you gazing around with serious homeware envy, while the friendly staff will make you want to come back for more. 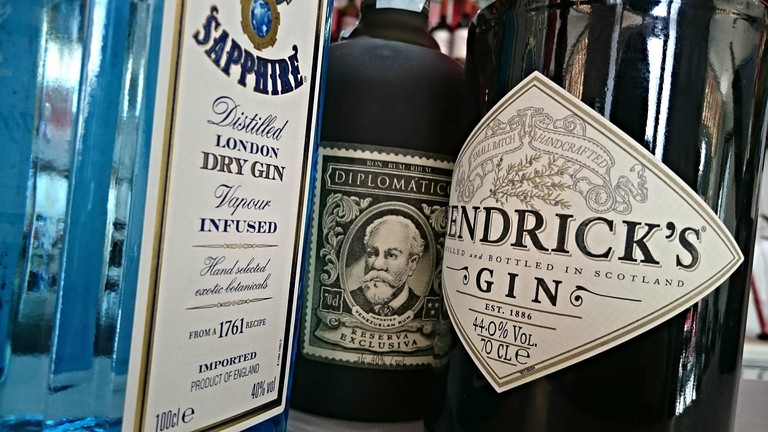 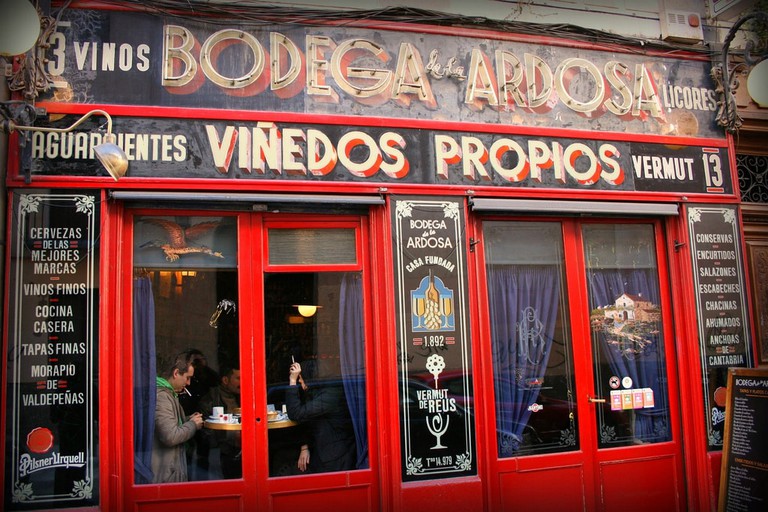 Bodega de la Ardosa | ©Juan Antonio Segal/Flickr
Bodega de la Ardosa was founded in 1892 and retains its old world decor and charm, as well as being the place to try the rumoured best tortilla de patatas (Spanish potato omelette) in Madrid. On weekends it is full to bursting, so visit on a weekday or early on if you want to grab a seat at one of the high tables.
http://instagram.com/p/5uucNISELM/?taken-at=35403
Open In Google Maps
13 Calle de Colón, Madrid, Comunidad de Madrid, 28004, Spain
+34915214979
Visit Website
Give us feedback

This industrial-chic restaurant, with a terrace on Plaza de San Ildefonso, serves up big, juicy burgers and a range of veggie options that will keep everyone happy.

It's my favourite day of the year… national burger day! Here's the juiciest burger that we tried in Madrid, it's gonna be up on the new blog next week so keep your beady eyes peeled for that 👀

Dedicated to the most memorable character in Pedro Almodóvar’s Todo Sobre Mi Madre (All About My Mother) Taberna Agrado has a menu of Spanish classics with some Asian additions and its very own cabaret, where you might see anything from comedy nights and concerts to moving monologues and theatre nights.

This cool theatre concept consists of mini plays, 15 minutes long, performed in an intimate setting of just 15 square metres for no more than 15 spectators at a time. Set in an old brothel that just adds to the quirky atmosphere, this is a great way to dive right into Spanish culture, and practice your Spanish listening skills too.

Bar, Spanish
Facebook
Email
Twitter
Pinterest
Copy link
Share
Map View
This gym, bar and restaurant has a fabulous rooftop space complete with pool, where you can catch some rays while sipping on a cocktail. Best of all, entrance to the pool is completely free.
Open In Google Maps
2 Calle de la Luna, Madrid, Comunidad de Madrid, 28004, Spain
+34915320974
Visit Website
Give us feedback

The association of triBall business organises regular events, a recent one was a celebration of all things tortilla (Spanish potato omelette). Bars and restaurants throughout the triangle put on special drink-and-tortilla deals during the three day event. Keep an eye on Triball’s Facebook page for upcoming events.