Why You Must See the Correfocs at La Mercè Festival, Barcelona

Culminating on September 24th each year, the La Mercè festival is a week-long celebration of Barcelona‘s patron saint. A unique tradition which is only observed in the Catalan capital, one of the most striking features of the festival is the ‘fire-run’ or correfoc, during which fireworks and firecrackers are set off among a procession of dragons, devils and other ghastly creatures.

The La Mercè festival has been celebrated in Barcelona since at least 1871 when it was first declared an official holiday. Throughout the week in the run up to September 24th, numerous processions, dances and other traditional ceremonies take place across the city. This involves spectacular human pyramids known as castells which hold a special place in Catalan culture.

The final day, known as the Día de la Mercè, sees some of the most impressive events take place including the grand finale firework display at the Montjuïc fountain. This is also when a special fire-run known as correfoc – an essential feature of Catalan culture – is organised in the centre of town. 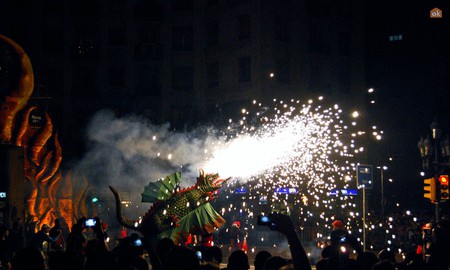 A dragon at the correfoc | © OK Apartment

Present in practically any traditional Catalan procession, the correfoc has been a part of Catalan culture in some form since the 12th century. Back then the Ball de Diables or ‘dance of the devils’ was a popular form of dance or street theatre which represented the forces of good and evil against each other. People dressed as devils would run among the audience causing trouble and agitating the crowd.

Throughout the centuries this tradition evolved to give modern day correfocs which usually take place after dusk. In the darkness of night, devils and other ghastly creatures proceed down the street throwing sparks and fireworks at members of the crowd who are sometimes chased or invited to run among the monsters. 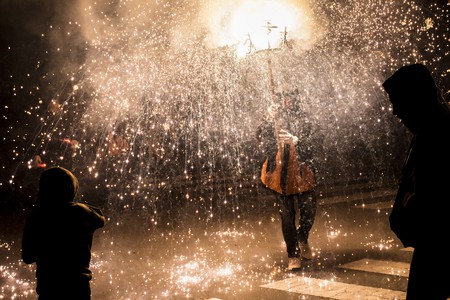 A firework bearer at the correfoc | © Josep Enric

The result is truly spectacular as people run through clouds of smoke and explosions of fireworks to both provoke and avoid the creatures. Local musicians usually accompany the procession with the sound of drumming and other traditional instruments.

La Mercè festival features one of the largest and most spectacular correfocs in Barcelona, usually occupying the length of the Via Laietana near the Gothic Quarter. Locals know to wear appropriate clothing and even protective eyewear to avoid any burns from the sparks of the correfoc. 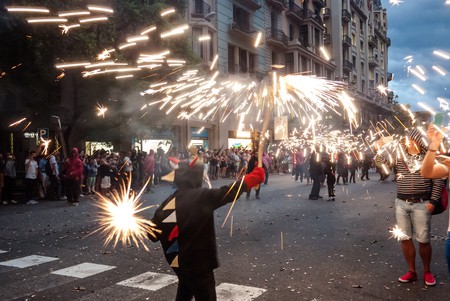 Little ones can enjoy the correfoc too | © pstmn 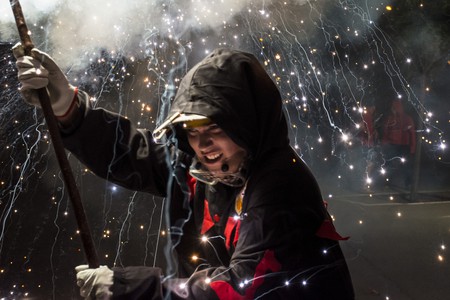 Devils at a correfoc | © Jacob Garcia
Give us feedback