Top Things To See And Do With Children In Valencia, Spain

Ciudad de las Artes y las Ciencias, Valencia | © Maribelle71/ Wikipedia
A family travelling with small children has a lot to plan if they are going to make their trip successful and enjoyable. Valencia is an amazing city to visit if you are travelling with kids. Not only are the locals easy-going and helpful, but there are numerous attractions that will make your children will love. Here are some of the best.

Bioparc Valencia is a stunningly gorgeous zoo. They have gone to incredible lengths to create beautiful and realistic habitats for the animals, and you may find yourself taking just as many photos of the scenery as of the animals. It isn’t a huge zoo, which is great for little legs that tire easily. Plan to spend between two and four hours there. The park forbids bringing in any outside food. They will make some exceptions for very young children, but if you bring a picnic, you’ll have to leave it at the entrance. The nearest metro station is Nou d’Octubre. 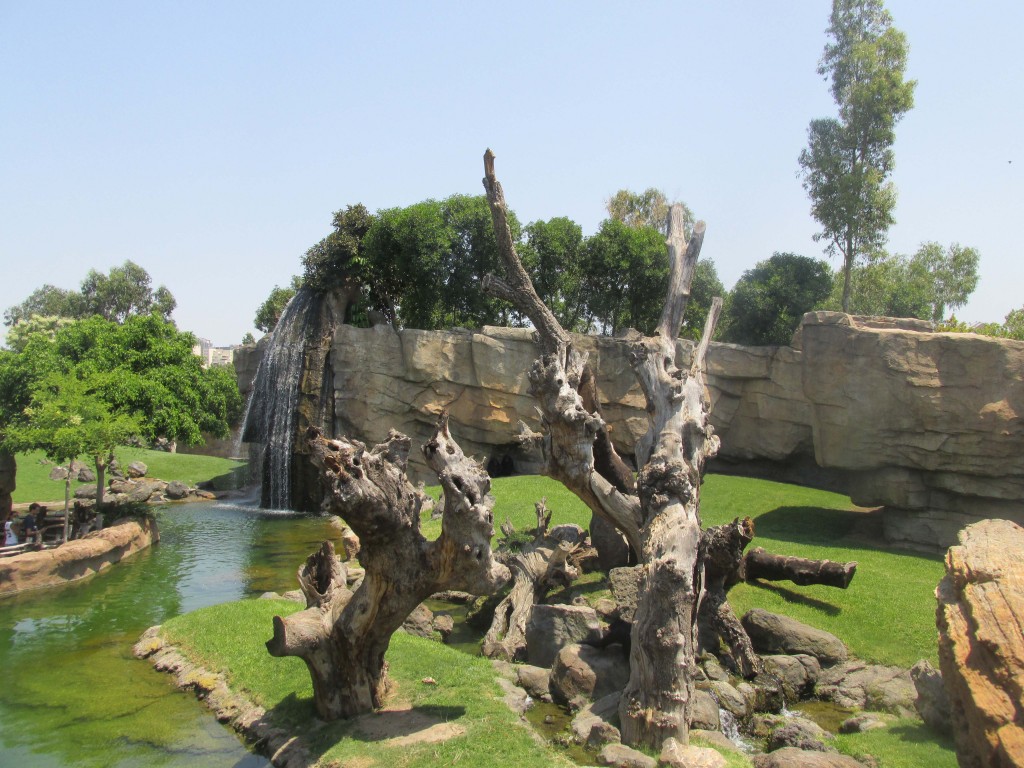 If you are already by the Bioparc, why not stop by the Parque de Cabecera? You can rent a swan pedalo boat, have a picnic or just take a scenic route back to the metro station. This park is part of the Turia, a green space that stretches for nine kilometers throughout the city, so I wouldn’t recommend walking the whole Turia if you have young children. There are a lot of playing fields and sporting grounds to traverse before you get to the more touristy points. 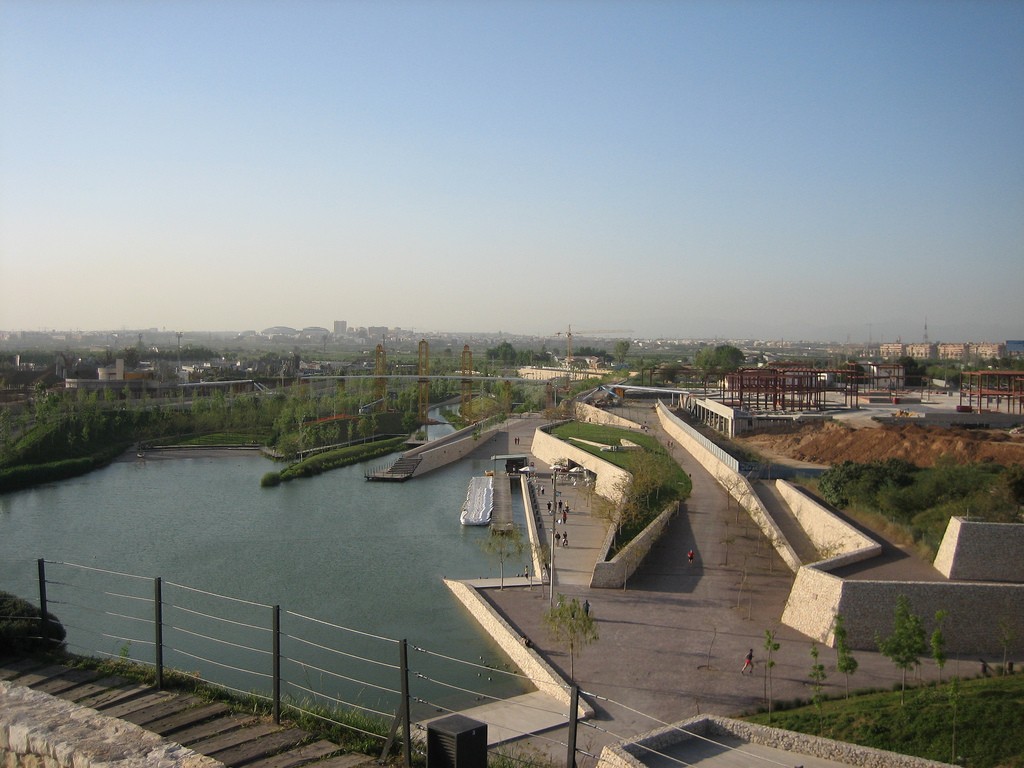 A trip to Valencia isn’t complete without seeing beautiful Malvarrosa beach. Topless sunbathing is common. There are several playgrounds, volleyball nets and plenty of sun lounges and parasols to rent. The sand is clean, and the water is warm and calm for paddling. To get there, take the metro (tram) line four to Eugenia Viñes. The trams only travels in one direction at this point in the line, so when you are ready to return, go back to the same stop. 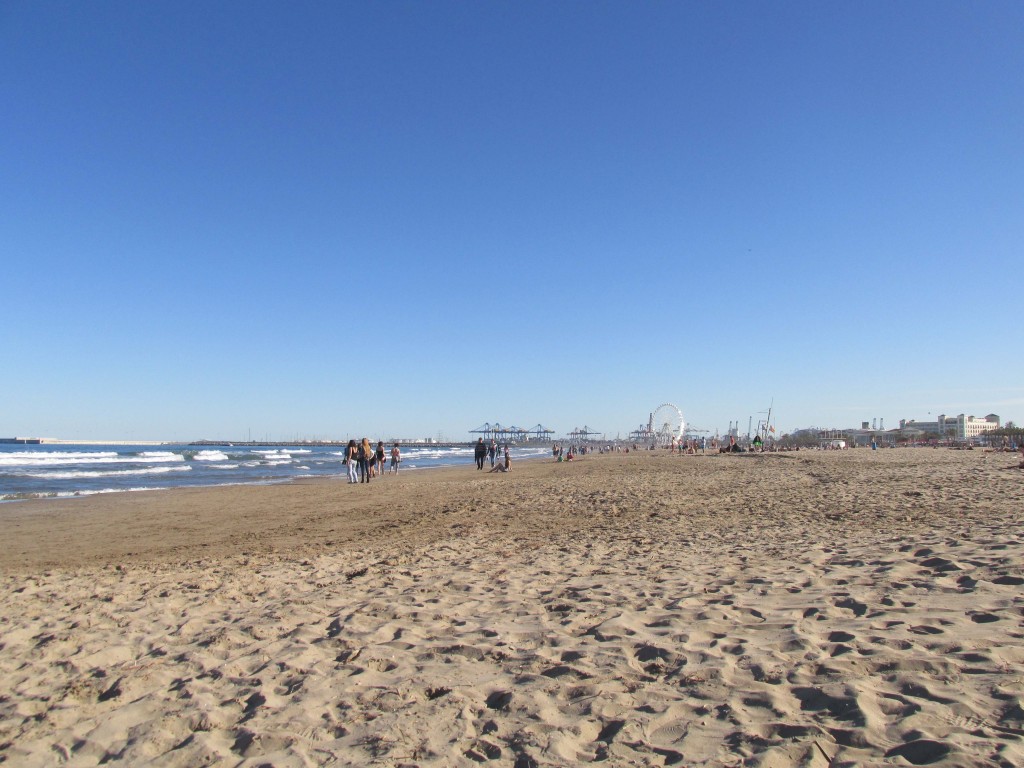 If your children love trains, don’t miss Parc Municipal La Granja. One day a week, they have a miniature railway that you can ride. This is no carnival ride that loops in a circle. This miniature has more than one ticket booth, a bridge, a tunnel, several stations and a turntable. Check the website for the running times as they change depending on the season. By public transport, you can take the metro (tram) line four to La Granja. Lines one and two to Empalme or line two to Canterería are also in walking distance. 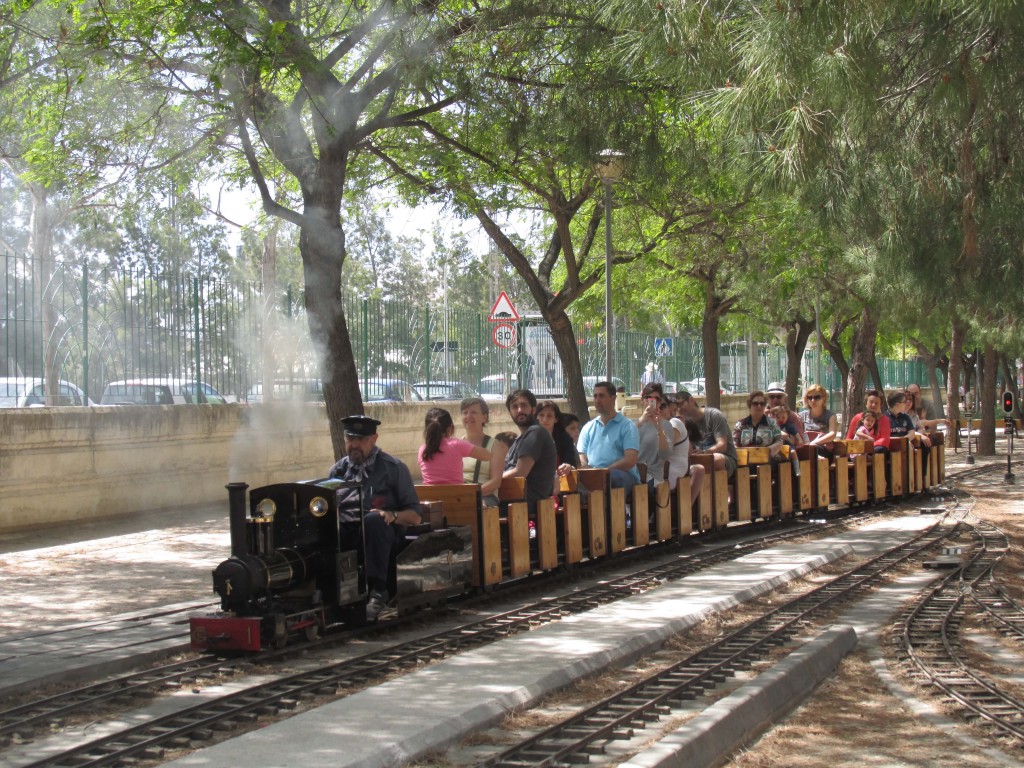 The Turia is the name of a river that runs through Valencia, or at least it was. In 1957 the Turia flooded so badly that the government enacted an ambitious plan to reroute the river around the city. The riverbed was then turned into a grand park and leisure area. Walking the Turia itself is a wonderful outing. You’ll see amazing architecture, have plenty of children’s play areas to rest in, and you’ll get to see Valencians doing all sorts of interesting activities. You might even see people practicing their tightrope walking. Alameda station is a good starting point with children. As soon as you leave the station, you will run into a massive net of red rope that children of all ages adore.

Rope Jungle Gym in the Turia   Courtesy of TyLean Polley

Walking along the Turia, you’ll see a lot of unusual bikes, including some the size of a small car that can fit the whole family. You can rent them from Diverbikes and explore the Turia in style. They even have extra large bikes with a third row that can fit as many as eight people. 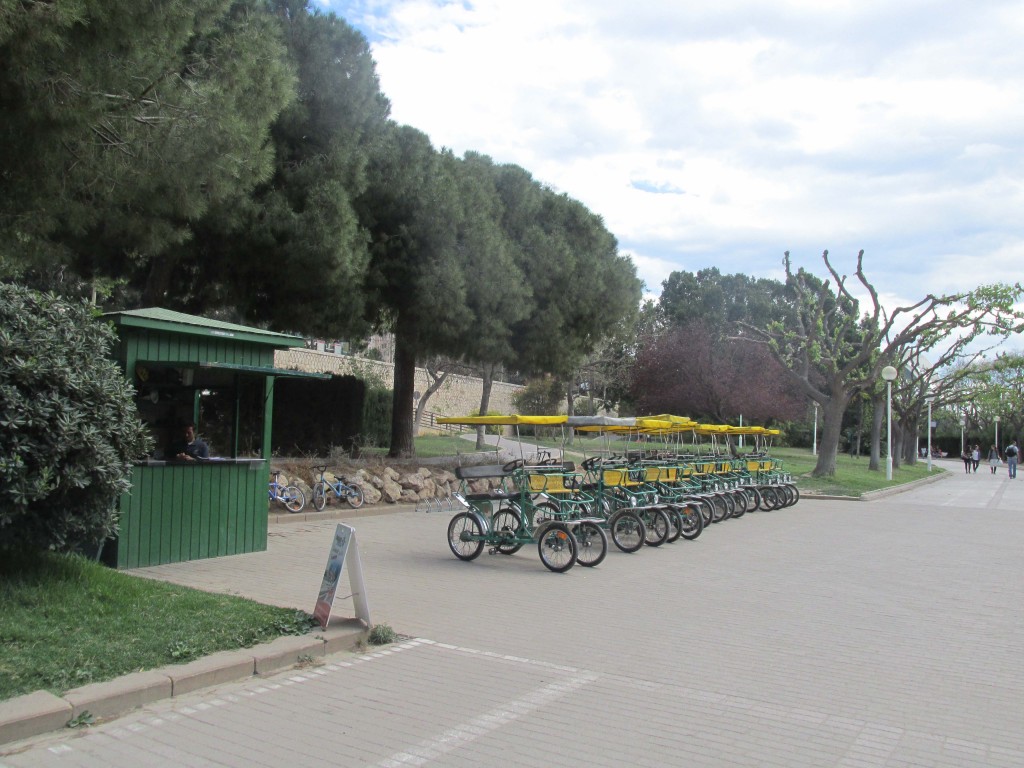 Parque Gulliver is a gigantic playground where all of the creases and crevices of the giant’s clothes serve as steps and slides. He’s been made perfectly to scale so that the children (and adults) scampering up and down his body and appendages look like Lilliputians. Considering he’s a giant, he can be surprisingly easy to miss. The entrance is by the Diverbikes unusual bike rental kiosk. Although the park has turnstiles, entrance is free. 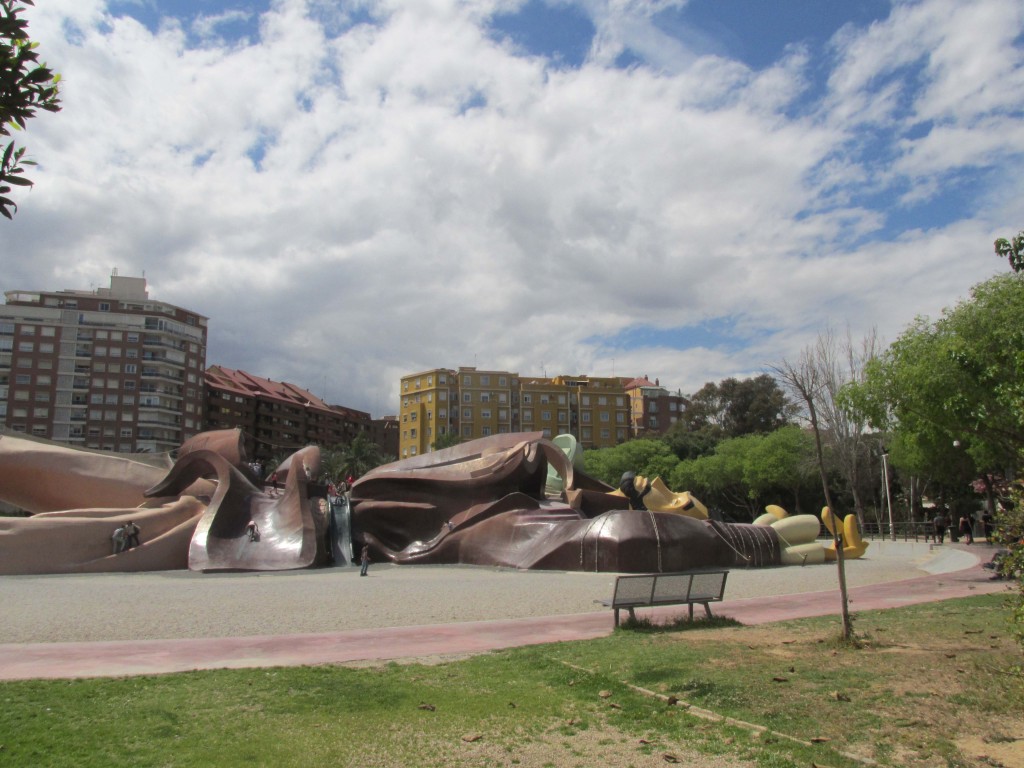 If you think the Museo de las Cièncias Príncipe Felipe might be too boring for children, think again. Situated in a stunning Santiago Calatrava building, the museum has an entire floor dedicated to keeping little hands busy and engaged. The highlights for young children include an incubator where chicks are hatching and a soft play center that has one-hour play sessions included in the price of admission. 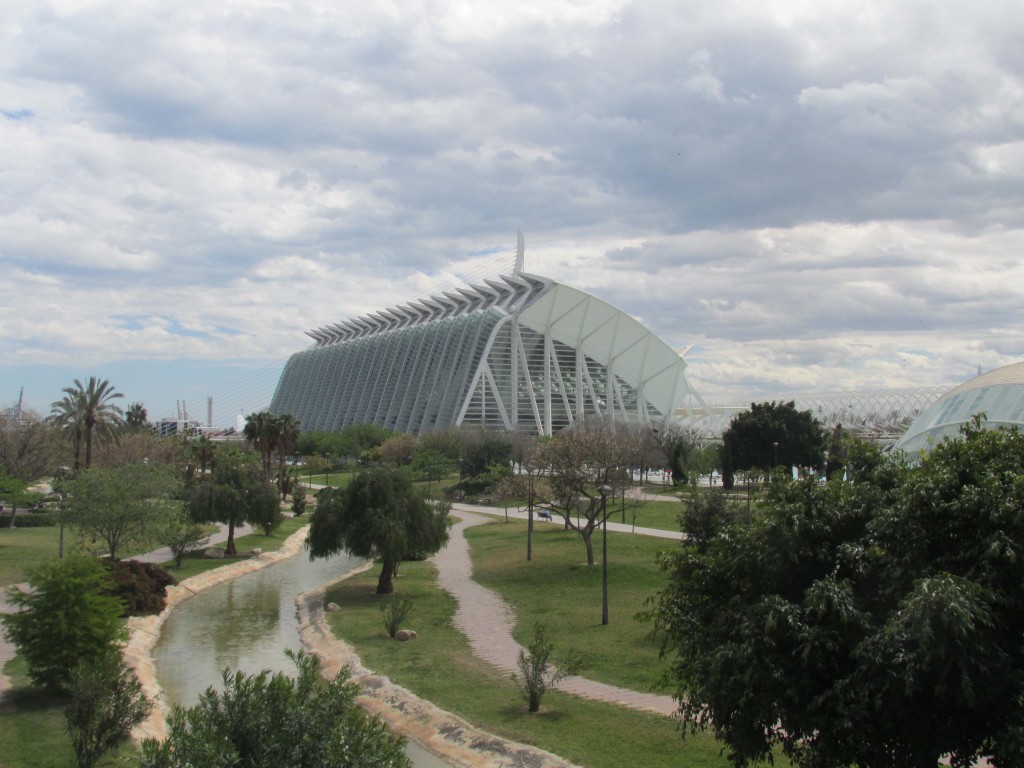 The Oceanogràphic is Europe’s largest aquarium, housing more than 45,000 marine creatures. If you start your day early enough, consider getting combined day tickets that include the Museo de las Cièncias and l’Hemisfèric. The park features more gorgeous buildings and wonderful exhibits by Santiago Calatrava. There is a dolphin show, which is mostly in Spanish, but there is enough translated into English to follow along. The majority of the show talks about the park’s conservation and rescue efforts with a few minutes of dolphin tricks. 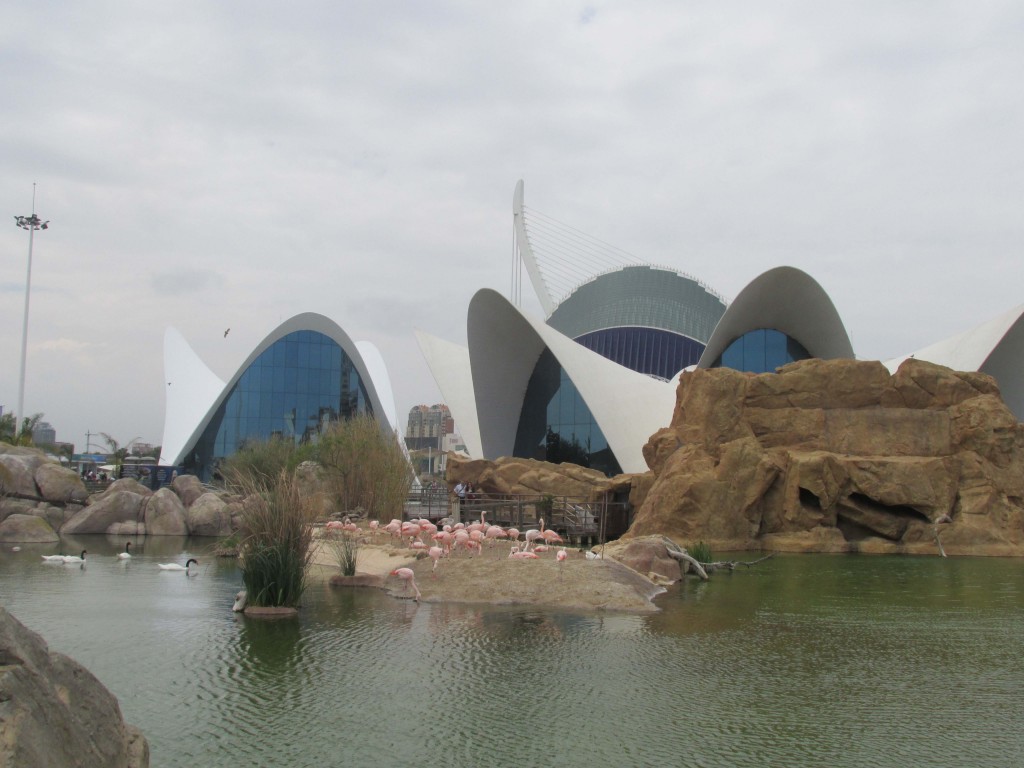