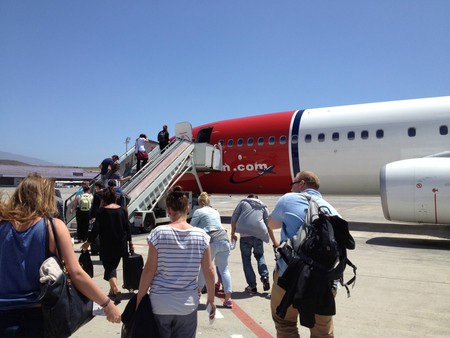 Travellers to Spain are facing delays after Spanish airport workers announced 25 days of strikes starting in September and lasting until the end of the year. Here’s everything you need to know.

Spanish airport workers have voted to strike in 25 airports across the country from September 15, which could cause serious delays and travel chaos for tourists and visitors to the country.

This is the front of the queue to get into the queue for the queue for security at Barcelona Airport this morning. #holidayOver pic.twitter.com/QnNCqLrs45

Some 8,200 workers at Spanish airport operator Aena, including luggage belt operators, security guards, IT workers and car park attendants, are set to hold the series of 24 hour-long strikes over pay and working hours disputes.

The strikes, called by three of Spain’s main airport workers’ unions (CCOO, UGT and USO) will affect travel on five days in September, seven days in October, two days in November and 11 days in December, one of the busiest periods in Spanish airports due to the Christmas holidays.

Barcelona’s El Prat airport has already been plagued by delays throughout July and August after security staff staged a series of strikes over pay disputes.

Waiting times of three hours and above meant that over 1,000 people missed their flights, while police were called in to assist with security controls during the two-week period

Spain is one of the world’s top tourist destinations, with a record-breaking 75 million visitors in 2016, a figure the country looks set to beat in 2017.