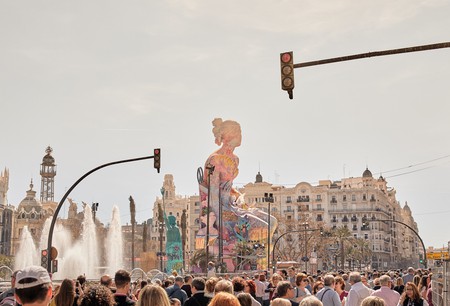 Las Fallas, Valencia’s annual festival that celebrates the arrival of spring with fire, explosions and art, is a much-loved, 300-year-old tradition. But how does a festival that embodies the adage ‘out with the old, in with the new’ retain its centuries-old heritage? 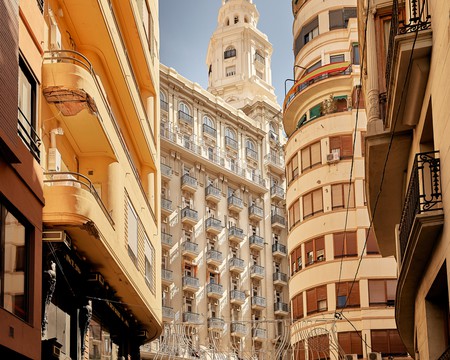 It’s a bright, clear morning on the final day of Valencia’s Las Fallas celebrations. Crowds are setting up camp in the city’s central square, enjoying picnics, cracking open drinks and playing cards, ready to experience the 19-day festival’s final mascletà – a daytime firework display centred around the noise and smoke caused by the explosions, rather than the visual spectacle. 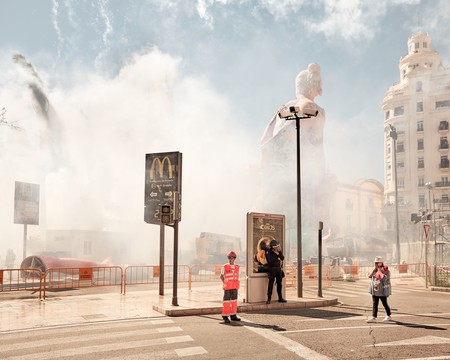 From the main balcony of the Town Hall, you’re just about eye level with the face of the festival’s main falla, a colossal, Aristophanes-inspired sculpture daubed in vivid colours and covered in graffiti. 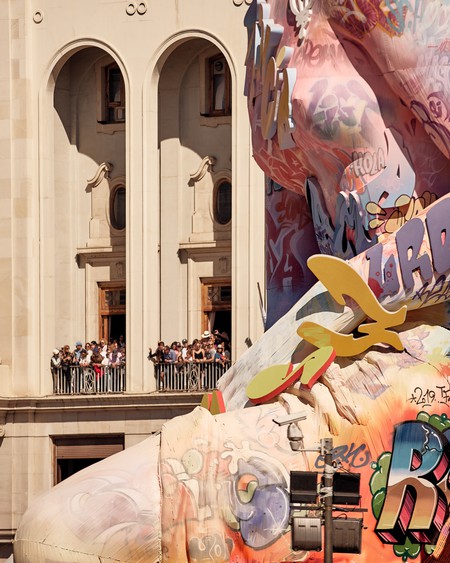 Encircled by smaller sculptures depicting various mythological figures, it dominates the square, towering above trees and street lamps and reaching the height of many of the surrounding buildings. Tonight, it will be burned to the ground. 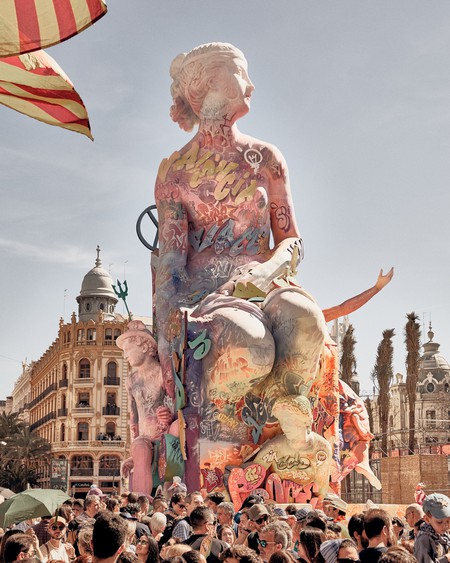 Get ready for the bonfire | © Zack DeZon / Culture Trip

Avo, one half of the Valencia-born street art duo Pichi & Avo who designed the monument, is thumbing through a local newspaper. A few pages in, he pauses on a story with the headline Modernidad y tradición se dan la mano, accompanied by a photo of their sculpture. “It means modernity and tradition hold hands,” he explains. 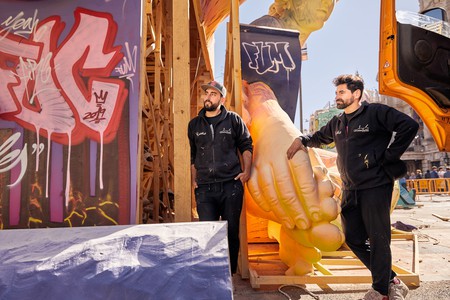 The artists grew up in Valencia | © Zack DeZon / Culture Trip

This duality characterises Pichi & Avo’s style. Running alongside the festival, their exhibition at Valencia’s 13th-century convent-turned-art-gallery Centre del Carmen saw the artists cover the walls of the gallery’s Renaissance cloister with graffiti tags and throw-ups. 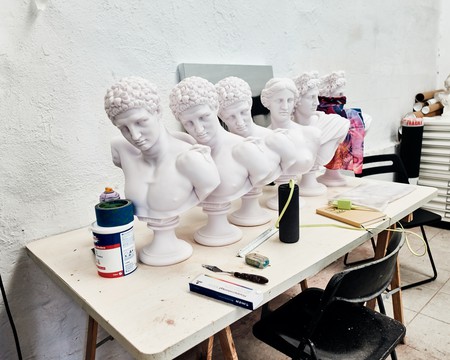 The piece unfortunately didn’t sit well with some local conservative groups, eventually being taken down due to its “undermining of cultural heritage”. Likewise, the reception to their Classical-style, graffiti-covered falla has been mixed. “Globally, it is being well received, but locally, not so much,” Avo says.

“Valencians are very traditional. Every year, they build the same style of fallas, so they don’t really know what to make of ours.” 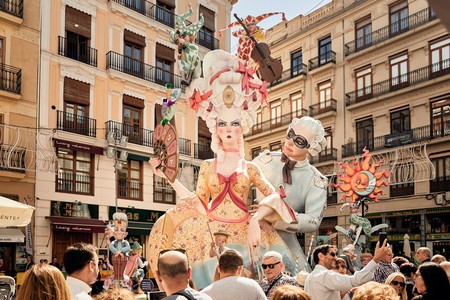 Pichi & Avo’s falla is a big departure from the typical style of sculptures dotted around the city during this time of year. Most are cartoonish and whimsical, a style that began over 100 years ago and became more extravagant and Disney-like over time.

“There’s never anything that edgy,” Avo says. “A grandma with a baby, or a giant cartoon family of firecrackers. Sculptures of political figures like Trump. I think it’s important to shake things up.” 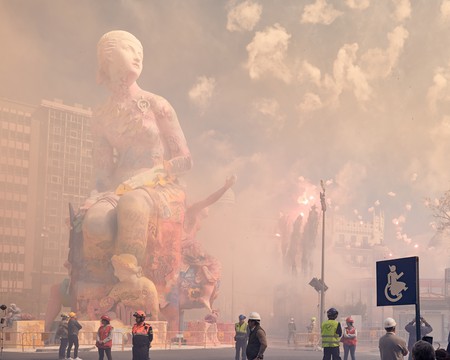 Their monument, which is the biggest the festival has ever seen, certainly does so. The duo were commissioned by the local government – which is more left-wing and open-minded, the artists add – to create the principal falla shortly after 2018’s festivities. “The idea was to develop our style – taking a classical thing and making it urban – in 3D.” 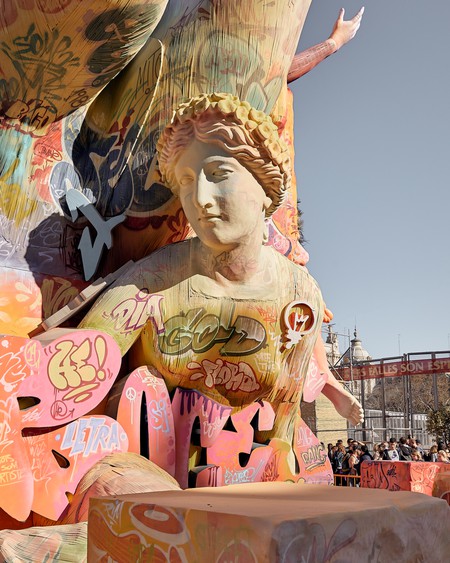 Some have embraced the duo’s hybrid style; others haven’t | © Zack DeZon / Culture Trip

During the three months leading up to the festival, they worked 18-hour days to finish painting it, adding their signature light-bulb logo and various other street art emblems and references. 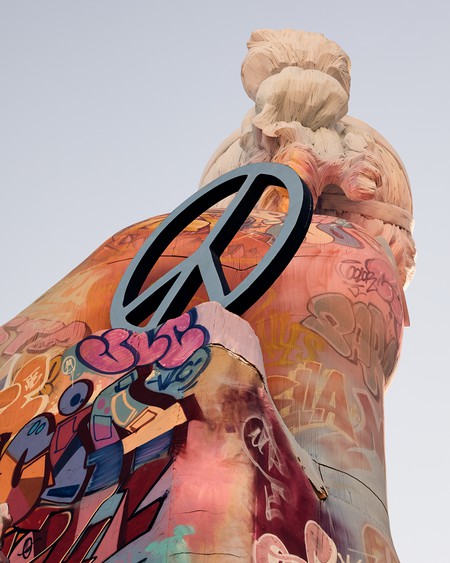 The peace sign, too, will burn | © Zack DeZon / Culture Trip

After unveiling the head of their monument at the festival’s opening ceremony, they were joined by falla creator Latorre y Sanz to build the sculpture piece by piece, “like a puzzle,” says Avo, in Valencia’s Town Hall Square. 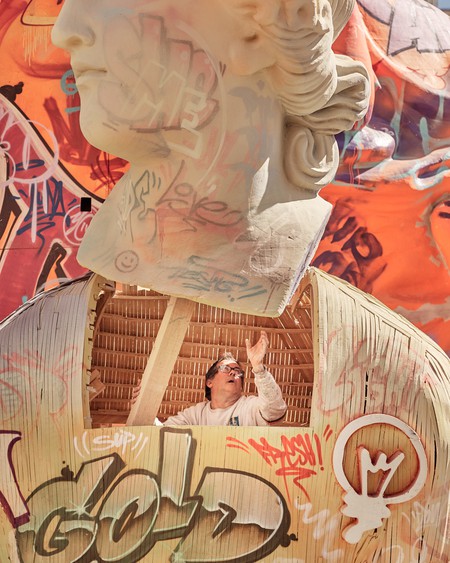 In giving Valencians a glimpse into the creative process behind their work, the artists hope to change the public’s perception of urban art. Despite Valencia’s being a hotbed for street art, according to the duo, the city has a track record of persecuting graffiti artists.

Pichi & Avo’s exhibition and falla indicate a step in the right direction, but many locals remain wary of veering away from the norm. When asked about opening up the principal falla creation to international artists, the pair were enthusiastic about the idea but added that Valencians wouldn’t be as open-minded. “It’d be interesting to see what someone from outside Spain could do. But the people of Valencia, they want something local. They want to maintain tradition.” 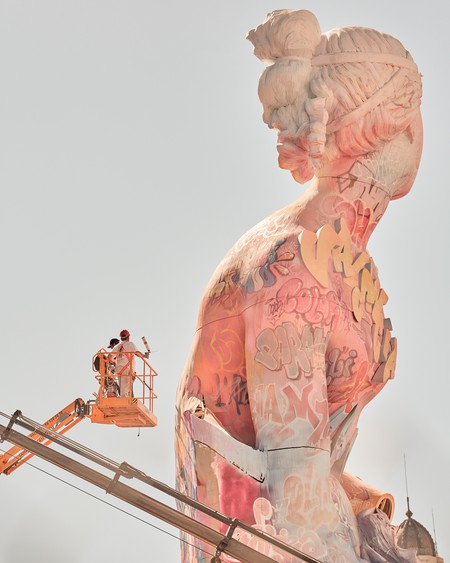 It’s easy to see why. Unlike other Spanish festivals such as the running of the bulls and La Tomatina, which has started charging tourists to join in, Las Fallas still feels uniquely local. The crowds gathered at the final two nights of the festival, Nit del Foc (Night of Fire) and La Crema (The Burning), as well as at the daily mascletà, are made up of Valencian families. 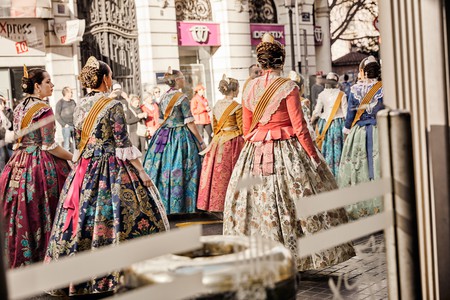 Traditional outfits still form a big part of the celebrations; processions of women (falleras) dressed up in elaborate, full-skirted dresses and men (falleros) in waistcoats and espadrilles parade down the streets.

It’s a rite of passage to join the parade, according to the artists. Pichi, the older of the pair, has a three-year-old daughter who marched in it with her mother for the first time this year. 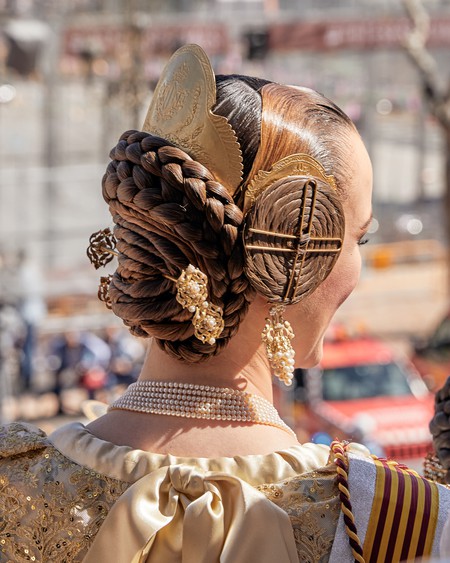 “She’s an artist, too. She takes after me,” Pichi says. It’s the morning after La Crema, during which the artists watched their falla go up in smoke as part of the festival’s closing ceremony. 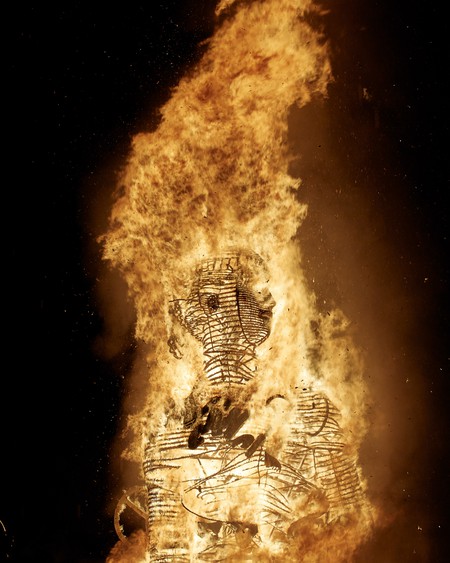 The duo are in good spirits following what is typically a sombre night, when children cry as monuments are torched – and “because they have to go back to school tomorrow,” Pichi jokes. “Growing up in Valencia, we were always surrounded by fire and art,” says Avo. “It’s an honour to be given the opportunity to create something for our city.” 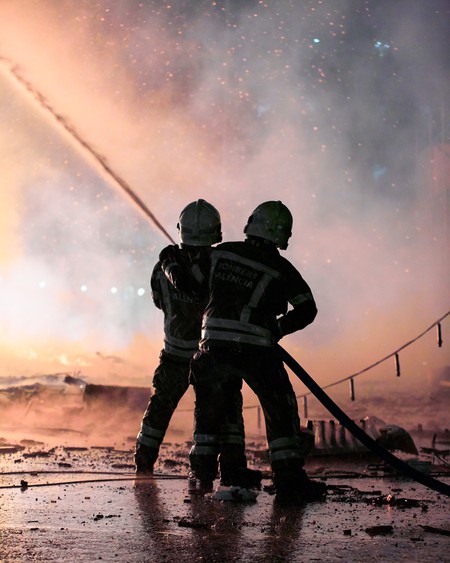 Pichi was raised in the peaceful fishing neighbourhood El Cabanyal and later met Avo through a local street art community. The artists’ small studio is near the airport, a few miles from one of their murals. Inside, a series of Grecian busts are lined up on the table, ready for spray painting, and mock-ups of their falla monument are stuck up on the walls. It’s here they began work on the sculpture over a year ago.

“We’re happy to see it gone,” says Avo. “It’s part of a 300-year-old tradition that began with people just burning old junk on a bonfire.” 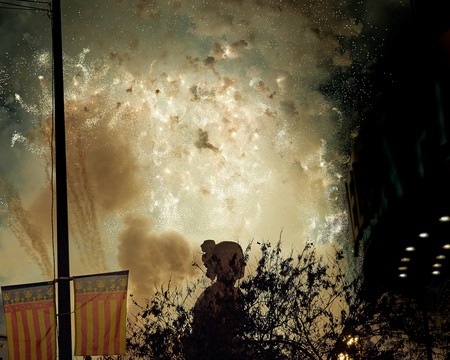 “Now,” he continues, “it marks the end of winter and celebrates the beginning of spring. Creating the monument was a lot of effort, yes, but it’s meant to be burnt. If it’s not, it would just be a normal sculpture. It wouldn’t be a falla.”