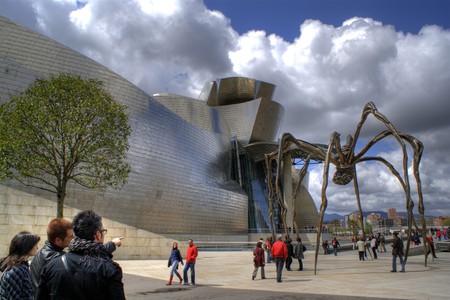 The Basque city of Bilbao underwent a major transformation during the 20th century, from a gritty industrial town, into a world famous city known for its avant-garde architecture and contemporary designs. Follow us as we take you on a tour of some of Bilbao’s most important and impressive architectural landmarks.

Begin your tour at the Zubizuri footbridge, which crosses the River Nervión, just east of the Guggenheim Museum. The bridge is also known as the Calatrava Bridge, named after the architect Santiago Calatrava who designed it. Resembling the large white sails of a boat sailing down the Nervión, it is made from arched steel cables and a translucent glass brick floor, which enables people to see the river beneath their feet. A very controversial design project, the residents of Bilbao either love it or hate it—nevertheless, it has become an important symbol of the city. 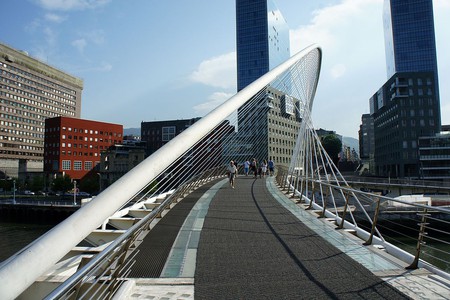 Follow the river round to the west and you’ll reach the city’s most famous contemporary landmark—the Guggenheim Museum. Designed by the American architect Frank Gehry, the Guggenheim resembles a large undulating metal ship floating down the river. Considered to be one of the most avant-garde pieces of architecture of the 20th century, it was built between 1993 and 1997 and is celebrating its 20th anniversary this year. Constructed from 33,000 fine titanium plates, it shimmers and almost seems to move on sunny days. 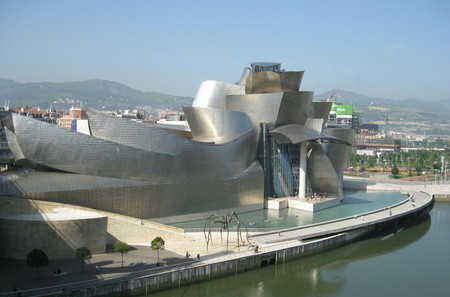 Located in the Recalde district of the city, the Casa Montero is more commonly known as the La Casa Gaudí, though it was not even designed by the famous Catalan architect. It has acquired this nickname because of its resemblance to the Catalan modernism style found in and around Barcelona, and is the only one of this kind to be found in Bilbao. Designed by Luis Aladrén, it was built in 1904, yet is still seen as a contemporary structure, compared to many in the city’s Casco Viejo or Old Town. 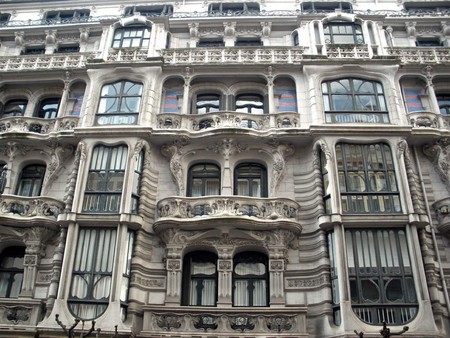 The Ministry of Public Health

From the Casa Montero, walk all the way down Iparraguirre Kalea until just before you reach the Azkuna Zentroa. Here you’ll turn left and walk just one block to the Headquarters of the Basque Health Department—one of the most striking buildings in the city. An iceberg-like structure made from prisms of glass and steel, it was designed by Coll-Barreu Arquitectos. Completed in 2004, it features many floors of large open-plan offices. Looking almost like folded origami paper with mirror-like surfaces, the building almost seems to change its appearance depending on the viewpoint, time of day, and season. 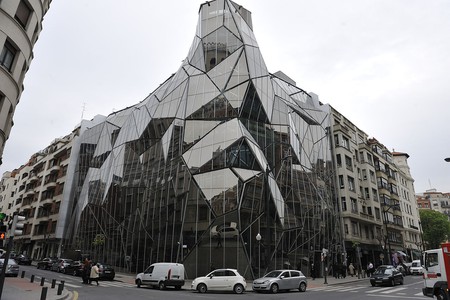 After your small detour, carry on to the Azkuna Zentroa, once the city’s old wine exchange, known as the Alhóndiga Bilbao. Originally built during the early 1900s, it was designed by the architect Ricardo Bastida. In more recent times, the French designer Philippe Starck was commissioned to redesign the building into a culture and leisure center for the modern age. Having opened in 2010, today the building rests upon 43 uniquely-designed columns and has a huge image of a floating sun in the central courtyard. 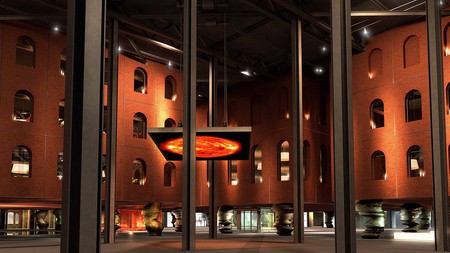 Follow the Alameda Urquijo around for three blocks, until you reach the Campos Eliseos Theater. The theater fuses together both contemporary and traditional architecture in one amazing design. Originally inaugurated in 1902, the theater was changed in the 1920s and ’40s and then was badly damaged by a bomb in 1978. It was later restored by the architects Rufino and Pedro Basáñez, but was then completely rebuilt in the 1990s using glass and steel, save for its ornate Art Nouveau façade. For more information on the Campos Eliseos Theater, read our article on its history here. 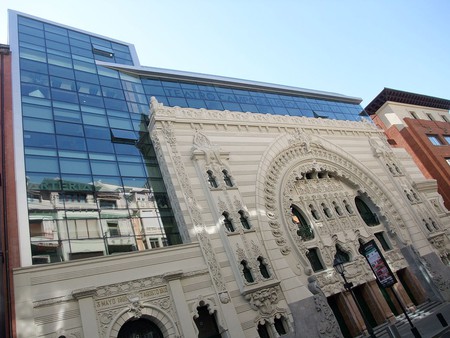 The next structure is a little further away, so hop on the nearest metro to take you to the stop called Miribilla. From here it’s a short walk to the Bilbao Arena. Designed by the architects Javier Pérez and Nicolás Espinosa, the Bilbao Arena was built to host events such as basketball games by the local Bilbao Basket team, as well as cultural and leisure events. Completed in 2010, the building is located in the Miribilla district of the city and also houses a large gym and swimming pool for local residents to use. The arena was created to mimic the natural environment that surrounds it, including the grey stone from the former Miribilla mines and the green shades of the trees. 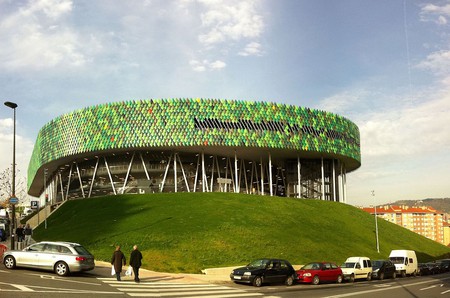