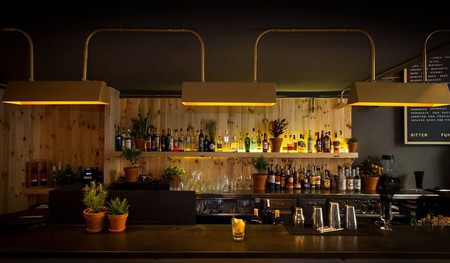 Barcelona is an ideal location for bar-hopping. The genuine hip factor that manifests naturally in the Catalan neighborhood of Sant Antoni makes for a great atmosphere for drinking. Here are the best bars in this area. 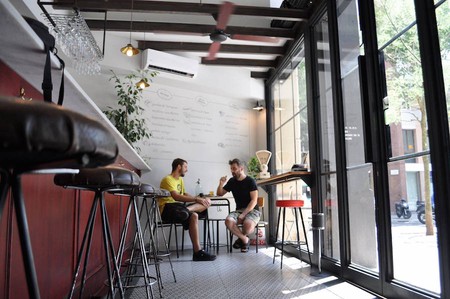 If vermouth is your drink of choice, head to the sophisticated vermuteria Casa Martino, which offers quality on tap. The black-and-white tiled flooring will have you gawking down at the entrance before making your way inside to make an order. A broad selection of carefully prepared appetizers are available throughout the day. Don’t miss the classic brandade (cod poached in salt and olive oil) with their gourmet bread sticks. It will make you want to savor the rest of the items on the menu, and you will be glad you did. There is a small, prominent gallery with designs from mainly local artists. For warmer days, you can enjoy the sun on their cozy terrace.

Gastropub, Pub Grub, Wine, Beer
Facebook
Email
Twitter
Pinterest
Copy link
Share
Map View
The name of this bar translates to ‘southern atmosphere,’ referring to one of the co-owners being from the Andalusian city of Granada. He, along with another entrepreneur, opened this place with the same concept behind the bars from his home city: offering free appetizers with the order of a drink. This generous approach is not as common in Barcelona as it is in Granada, which makes the bar a unique spot in the city. This bar is a good end-of-the-month idea for groups of friends. They serve a tortilla española (a traditional potato omelette) made with over 40 eggs and 5 kilograms of potatoes, which has got everyone rushing over; yes, it is unbelievably delicious, and no, it isn’t one of the free options! Without luxury or false claims, this little two-story bar features a lot of southern sympathy with very social servers. Their success has encouraged them to open another bar on Calle Floridblanca 88.
Open In Google Maps
85 Carrer de Viladomat, Barcelona, 8015, Spain
+34934230429
Give us feedback

Grocery Store, Spanish, Vegetarian
Facebook
Email
Twitter
Pinterest
Copy link
Share
Map View
This gourmet grocery store-cum-bar is a referential point for wine and delicatessen lovers with a sophisticated palate. Opened in the summer of 2014 is Caravela Gourmet. Portuguese owner Hugo Rodrigues has put his studies on wine culture to good use. His bodega in the back of the venue has over 100 different bottles of wines, ranging from sparkling wine from Portugal to regional Catalan wines like the Montsant and Priorat. It is a unique experience that you can’t get just anywhere, as you can take advantage of learning about wines while having a drink, or simply take a little bit of Portugal back home with you.
Open In Google Maps
13 Carrer de Manso, Barcelona, 8015, Spain
+34931241843
Give us feedback

Bar, Cafe, Cocktail Bar, Restaurant, Japanese, $$$
Facebook
Email
Twitter
Pinterest
Copy link
Share
Map View
The bohemian Café Manila is a true underground discovery. This venue is a mix between a restaurant, a cocktail bar and a cafe. There is no denying their skill at the art of making cocktails. Think daiquiri with strawberries, espresso martini, or a vermouth with ice, fizzed up with soda from the siphon. Snacks and drinks go hand-in-hand here, so be sure to have a bite in Café Manila’s colorful atmosphere.
Open In Google Maps
7 Ronda de Sant Pau, Barcelona, Catalunya, 8015, Spain
+34933487196
Visit Website
Give us feedback 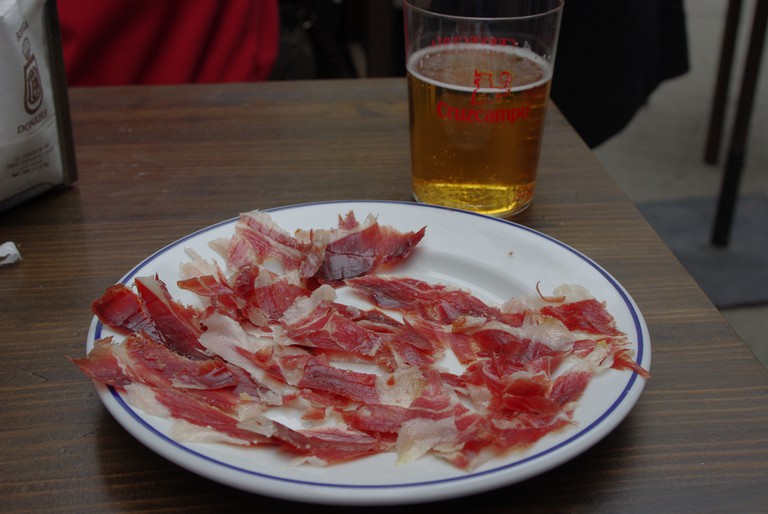 A plate of Jamon Ibérico | Solar Hydro / Flickr
This bar is a stone’s throw away from the Sant Antoni market, on the corner between Calle Comte Borrell and Calle Tamarit, to be exact. The owners, Yolanda and David (siblings), have created quite a name for themselves. Their sociable character will make you feel like you have met them before. Listen to good rock, blues, R&B and jazz music while having a drink and a snack. This place is very ‘Barcelonesque’ in style, with a good selection of cold and warm dishes. There are more than five varieties of cavas on display. This place is located in an area where residents do their weekly errands, giving it that cozy neighborhood feel.
Open In Google Maps
81 Carrer del Comte Borrell, Barcelona, Catalunya, 8015, Spain
+34933250283
Visit Website
Give us feedback

Bar, Spanish, $$$
Facebook
Email
Twitter
Pinterest
Copy link
Share
Map View
This is a bolt-hole with a surprising amount of space that resembles something from the Middle Ages. The variety of food and drinks to indulge in, along with the quirky ambience make this place very recommendable. The vast space allows for large groups, perfect for celebrations or gatherings of any kind. From Tuesday to Sunday you can enjoy their lunch menus consisting of a first dish, a second dish and a drink. They have a bar area, a terrace, a first floor and an underground floor. Looking in from outside, you can be easily fooled in thinking La Montiel37 is just another small venue in the area.
Open In Google Maps
37 Carrer de Viladomat, Barcelona, Catalunya, 8015, Spain
+34932809776
Visit Website
Visit Facebook page
Give us feedback

Bar, Cafe, Tapas, Beer, Wine, Cocktails
Facebook
Email
Twitter
Pinterest
Copy link
Share
Map View
Some may come here only thinking about ordering a cake and coffee, but La Chirusa is mainly a bar, and not a cafe. Despite this, the red velvet cake is beyond delicious, and you may dream of the lemon pie with extra meringue on top because it is that good. It is true that you will be craving a bite of your friend’s Nutella cheese cake, and yes, you will arrange lunch around Sant Antoni just so you can top it off with a carrot cake here. Yet, they also have a good selection of chilled cocktails, along with homemade lemonades. La Chirusa is also great for delicious non-alcoholic spritzers, sodas and mocktails; so be sure to get your beverage of choice.
Open In Google Maps
23 Carrer de Viladomat, Barcelona, 8015, Spain
+34930044699
Give us feedback

Bistro, Restaurant, Bar, Spanish, Mexican, $$$
Facebook
Email
Twitter
Pinterest
Copy link
Share
Map View
Agust is based on the gastrobar concept. Food and drinks can be enjoyed here and the overall experience is also impressive. They serve some of the finest fusion dishes from Asia, Greece, France and the Mediterranean. It has already attracted foodies, as they serve dishes you will only find in upscale, pricey restaurants. They opened in the summer of 2015 and their culinary explosion has been the most talked-about trend to come out of Sant Antoni. This is the gastronomic experience you will want to impress your loved ones with, so book in advance and see what the hype is all about. 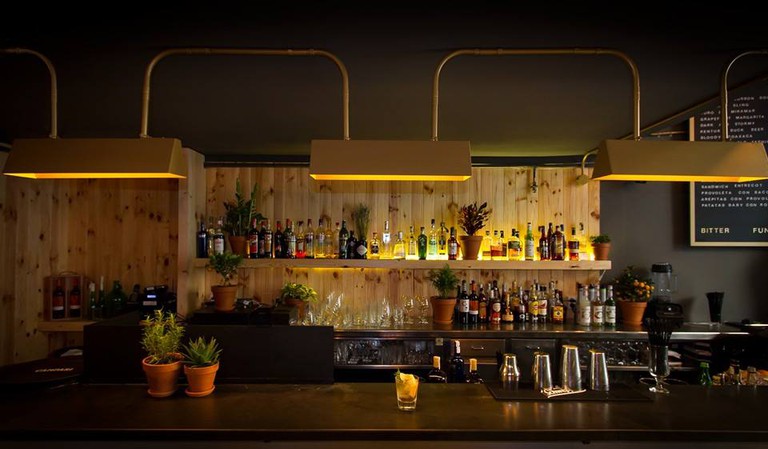 Grab a nightcap at the newly-opened Bitter Bar | © Bitter Bar
Bitter Cocktail Bar opened in mid-2015, and is considered one of the best cocktail bars in the city. The space inside is remarkably attractive, with an intimate lounge in the back. The mixologist experts behind the bar can recommend anything to you, just by telling them what floats your boat. If you are entering on an empty stomach, there is a short menu of sandwiches and little bites you can have before starting on the alcohol.
Open In Google Maps
17 Carrer de Viladomat, Barcelona, Catalunya, 8015, Spain
+34935327199
Visit Website
Visit Facebook page
Give us feedback

Bar, Bodega, Wine, Beer, Cocktails
Facebook
Email
Twitter
Pinterest
Copy link
Share
Map View
Bodega Vinito is a little bar and eating house in the famous Carrer del Parlament. Get there early because locals frequent religiously on weekends, just before lunch time. Eating and drinking here is a cultural experience where you are merry and sociable, and can easily mingle with strangers without getting odd looks. Their vermouth combines true modernity with an aristocratic feel of the past. Order their house wines to go in a glass bottle you can bring from home. Or, simply have a drink the way the locals do.
Open In Google Maps
27 Carrer del Parlament, Barcelona, 8015, Spain
+34934429657
Give us feedback

Bar, Bodega, Spanish, Wine, Beer
Facebook
Email
Twitter
Pinterest
Copy link
Share
Map View
Near Bodega Vinito you will find this extremely cozy bar with a large terrace adorned with flowers and colorful lights. The terrace is away from the sidewalks, which is a rare find in the busy streets of Barcelona. On the must do list: try any of Bar Calders‘ artisan Catalan beers with their fantastic Mexican enchiladas. As in many bars in the Sant Antoni area, they offer vermut de la casa (house vermouth) and a wide selection of appetizers to nibble on. Very good prices, high quality food and an attentive staff can be found here.
Open In Google Maps
25 Carrer del Parlament, Barcelona, 8015, Spain
+34933299349
Visit Facebook page
Give us feedback 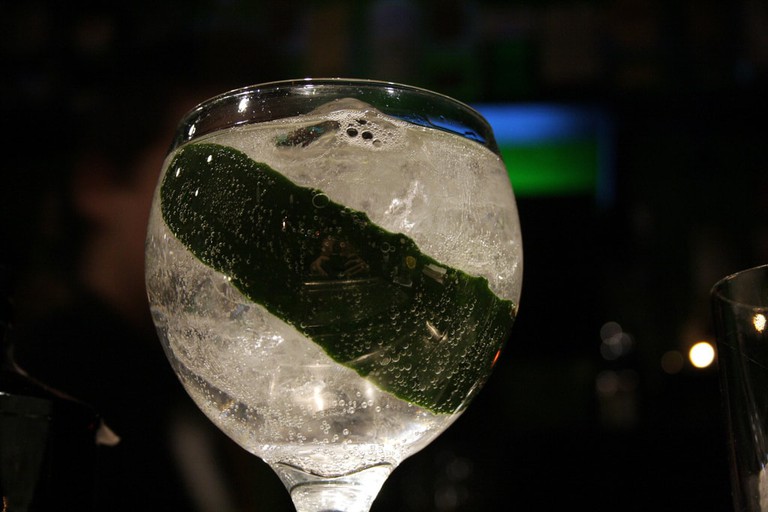 Barcelona’s bar scene loves a trend: one season it’s craft beers, the next it’s gin and tonic. Here is a cocktail bar that has given Sant Antoni the extra coolness that it needed on the night scene. Xix Bar on Carrer de Rocafort 19 has been making some noise for a while. What was once an old dairy shop is now an unconventional cocktail bar specializing in gin and tonics. Even if you think you know a lot about gins, come here and think again.