Top 10 Things to See and Do with Kids in Seville

Top 10 Things to See and Do with Kids in Seville

<a href="https://pixabay.com/en/gold-tower-guadalquivir-seville-2063563/">Gold Tower, Seville | © Pixabay</a>
Visitors taking children to Andalusia’s enchanting capital needn’t be worried about boredom setting in. Seville has a wealth of attractions and experiences to entertain the kids, from playing in the tropical paradise of its biggest park to falling through the air at the city’s enjoyable theme park.

Seville’s largest and most attractive park is just a five-minute walk from the city centre and is a wonderful place for kids bored of sightseeing to let off steam. There are many ponds to paddle in and loads of play areas for younger children, and members of the park’s wildlife – including ducks, doves and parrots – are eager to be fed. For older kids, there is the Museum of Popular Arts and Tradtions – a museum as fascinating on the inside as it is beautiful on the outside.

Building
Map View
People stroll past the Plaza de España in Seville | © Susana Guzman / Alamy Stock Photo
The part of Seville that is home to the Maria Luisa Park was developed especially for the city’s hosting of the Ibero-American Exposition of 1929. No expense was spared on the Plaza de España, a beautiful space that children of all ages will love. There is plenty of room to run around in, and four bridges representing the ancient kingdoms of Spain cross a semi-circular moat. Even better, you can rent a boat and drift around on the water, admiring the neo-Mudéjar grandeurof Plaza de España as the kids feed the friendly ducks.
More Info
Open In Google Maps
Av de Isabel la Católica, Sevilla, Sevilla, 41004, Spain
Visit website

Boating on the River

There are two ways to enjoy Seville’s Guadalquivir river, one requiring slightly more effort than the other. You can rent a pedal boat and potter about on the water if it’s not too hot; alternatively, you can take one of the touristy boat tours that leave from the Torre de Oro (Gold Tower) at the end of Puente de San Telmo. Either way, being on the water will keep the children entertained as you explore the river that connected Seville to the Atlantic and the New World, thereby ushering in the city’s golden age in the early 15th century. Boating on the Guadalquivir provides great views of both halves of Seville, with the historic bullring and Giralda bell tower on one side, and the colourful neighbourhood of Triana on the other.

In the spring and summer Seville is ridiculously hot, so if you’re visiting with children, try to keep the walking to a minimum. Around the cathedral you’ll notice gnarled old men standing next to their beautiful horses and ornate carriages, waiting to take visitors for a ride. These horse-drawn taxis are super-touristy, but in the heat of a Seville summer they are a fun way to see the city. They’ll take you anywhere they can access in the city centre (which rules out the implausibly narrow streets of Santa Cruz) and, if you fancy practicing a little Spanish, the drivers are usually happy to chat.

Aquarium
Map View
Kids of all ages will love Seville’s aquarium, into which the city poured a generous €8 million prior to its opening in 2014. It was well spent: the aquarium is home to 7,000 creatures of the deep, including two bull sharks, tropical fish, giant octopus, anacondas and spider crabs. Ingeniously, the aquarium is visited by following a simulation of the route taken in the first-ever circumnavigation of the globe, by the Elcano-Magellan voyage of 1519: down Seville’s Guadalquivir river, out into the Atlantic, up the Amazon and into the vast expanses of the Pacific.
More Info
Open In Google Maps
s/n Muelle de las Delicias, Sevilla, Andalucía, 41012, Spain
+34955441541
Visit website
Book Now

Experiencing one of Seville’s most famous cultural offerings is a must when you’re in the Andalusian capital. Children will be enthralled by the energy and colour of flamenco performances, which are available in numerous bars and theatres in the city centre. If you’re visiting with kids, the best place to head is the Museo del baile Flamenco (Museum of Flamenco Dance) in the charming old Jewish quarter of Santa Cruz. As well as the superb nightly performances, which star many of Andalusia’s best artists, an informative museum traces the history of this complex and intense art. 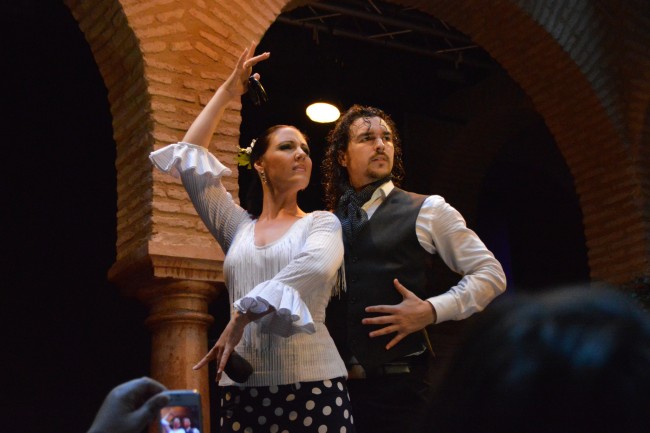 Kids will love the energy and colour of flamenco | © Ana/Flickr

Isla Magica (Magic Island) occupies the site originally used for the city’s 1992 Expo World Fair, and is themed around Spanish 16th-century colonial explorations. There are seven separate areas located around a large lake, featuring such rides as the Jaguar – which was the first inversion rollercoaster in Spain– and the truly terrifying El Desafio (‘The Challenge’), with a gut-wrenching free-fall of almost 70 metres (229 ft). There is also a cinema, live shows throughout the day and a 3D extravaganza every evening in which audience members are invited to participate. Seville’s Conquistador-inspired theme park is an enjoyable day out for kids and adults alike.

A visit to Seville’s cathedral might be tedious for younger children, but climbing to the top of its iconic bell tower will have more appeal. The way up is relatively easy, and the views over the city from the top are incredible. The Giralda, as the bell tower is called, was originally a minaret to a mosque built in the 12th century by Seville’s ruling Almohad dynasty; completed in 1198, a large copper globe in the traditional Moorish style topped the structure. It was toppled by an earthquake in the mid-14th century and was replaced with the bell tower we see today. 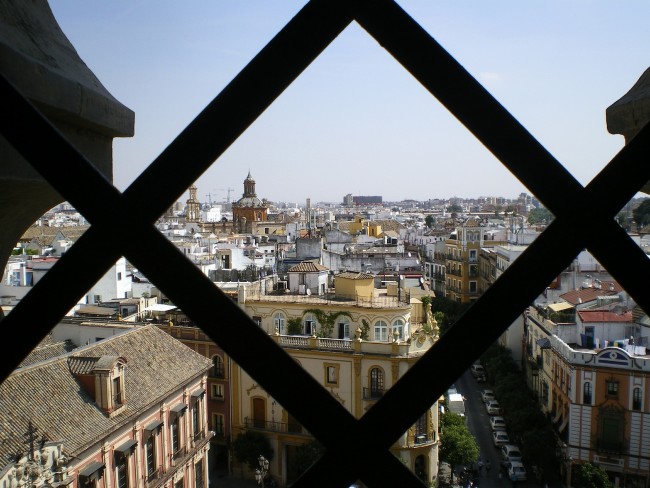 An abundance of tapas bars, restaurants and cafes in the Andalusian capital mean you are never far from somewhere to stop for a sweet treat. Ice creams will probably be the first choice, but for children wanting to try something a little more traditional, there are torrijas. Stale bread dipped in beaten eggs, deep fried and then smothered in honey or syrup, these decadent snacks are available in most cafes and tapas bars in the centre. Breakfast in Seville is also a bonanza for kids, as its two staples are unbelievably thick hot chocolate and churros, a dough-based, deep fried delight, to dunk in it.

When looking for accommodation in Seville anytime between about May and October, one thing should be at the very top of your list: a swimming pool. This is especially true if small children are accompanying you on your trip, as the heat of spring and summer can sometimes be too much. The best way to deal with it is to find a hotel with a stunning rooftop pool and terrace – and there are lots of them, to suit every budget. That way, you can relax on a lounger with a refreshing cocktail while the kids cool off and play within sight. Rooftop terraces also provide amazing views of the city – and everyone, no matter how old or young, likes a good view.