Top 10 Things to See and Do in El Centro, Seville 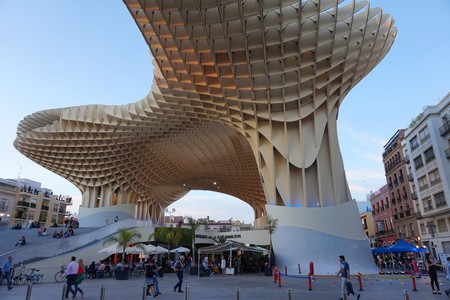 The city centre of Seville is packed with historic monuments, beautiful public spaces and charming, centuries-old neighbourhoods. Entertaining yourself in the Andalusian capital, then, is a doddle. Here are the 10 sights and experiences you don’t want to miss on a visit here. 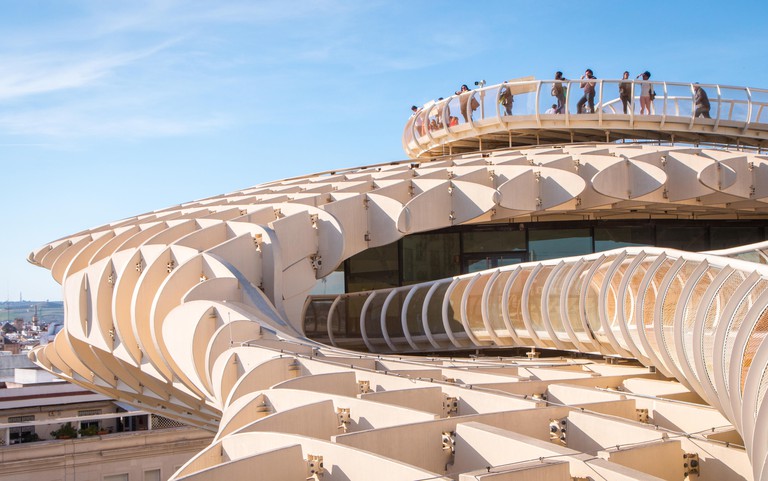 Visitors enjoy the views of Seville from the Metropol Parasol | © Zefrog / Alamy Stock Photo
The Metropol Parasol is known locally as Las Setas, or The Mushrooms, because of the distinctive shape of its vast wooden canopies and stalk-like supporting pillars. When work started on this unusual structure in 2005, Roman remains were found underneath Plaza Encarnación, making construction a lengthy and controversial process. It was to protect the extensive remains that these enormous wooden fungi were designed, to be supported on just a few elegant white pillars above the square. The Roman ruins can be viewed in the archaeological museum on the Mushrooms’ lower ground floor, whilst up on top a winding walkway provides stunning views over the city, especially at sunset.
Open In Google Maps
s/n Plaza de la Encarnación, Sevilla, Andalucía, 41003, Spain
+34606635214
Visit Website
Give us feedback

One of the Andalusian capital’s most attractive public spaces, the Plaza de España, reminds you of the city’s historical wealth and power. Constructed from 1914–1928 in preparation for Seville’s hosting of the Ibero-American fair in 1929, this vast, half-moon building showcases the blend of neo-Moorish and Renaissance Revival styles that is distinctive of many structures in Seville. A dash of art-deco also decorates the colourful facades of what are now offices for southern Spain’s luckiest (and apparently laziest) regional politicians and bureaucrats. Overlooking these beautiful buildings is a vast plaza surrounded by a moat, on which you can enjoy a spot of gentle boating.
Open In Google Maps
Avenida Isabel la Católica, Sevilla, Andalucía, 41004, Spain
Visit Website
Give us feedback

Even for those who are normally unmoved by big churches, the sheer size of Seville’s mighty cathedral will cause a slight intake of breath upon first viewing it. The Cathedral of Saint Mary of the See, is the largest cathedral in the world; in total, it comprises 80 chapels and is home to the biggest altar on the planet. Construction of this sprawling Gothic complex, which takes up the equivalent of several city blocks, began on the site of Seville’s former mosque in 1401 and continued for over a hundred years. In 1507 the cathedral was finally completed, quite spectacularly succeeding in its original aim – namely, to show the rest of Europe how powerful and wealthy Seville had become. 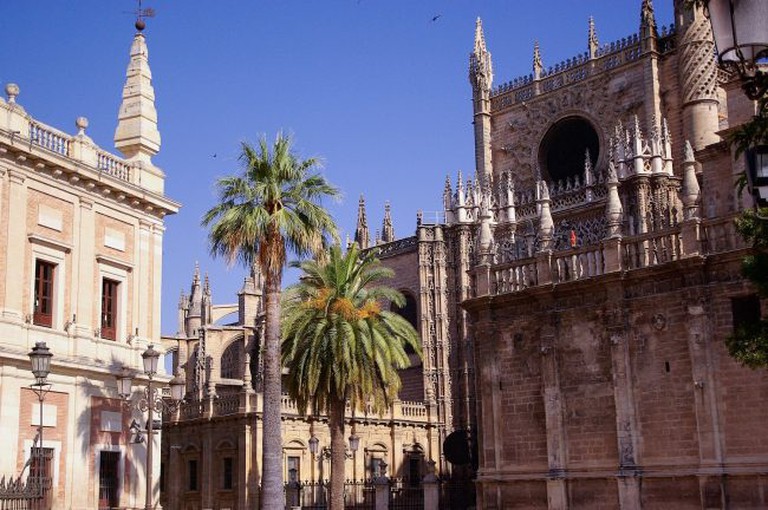 Just a few minutes’ walk from Seville’s greatest Catholic monument is a grand reminder of the city’s time under Muslim rule. Though considered one of the finest examples of Moorish architecture in Spain, the Alcázar’s various sections have differing styles and date from the Mudéjar and Renaissance periods as well as from the city’s Moorish epoch, which lasted from the eighth to the thirteenth century. Elegant patterned archways, tranquil ponds and cool internal courtyards make Seville’s Moorish palace just as captivating as its more famous counterpart in Granada, even if it does lack the latter’s architectural pedigree. 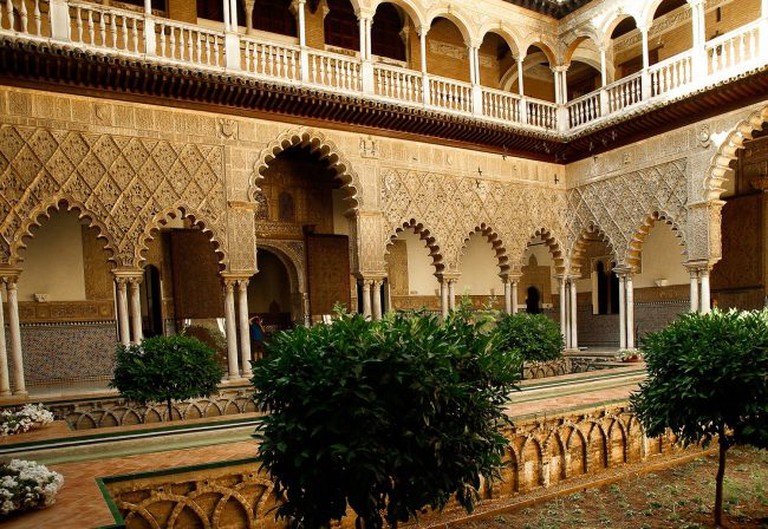 Completed in 1881, Seville’s stately yellow-and-white bullring sits prettily on the east bank of the Guadalquivir river, blending in effortlessly with the surrounding buildings. Along with the more imposing and much larger Las Ventas in Madrid, Seville’s 12,000-capacity ‘plaza de toros’ is the most important in Spain – a fact which reflects how bull-related culture is a key component of Andalusia. The quality of the performances here is just as high today as it was during the early 19th century, when the ring played host to two of the greatest matadors of all time – Joselito and Belmonte. During Seville’s annual April Fair, daily bullfights are held, but if you’re not up for attending the spectacle that occurs within, excellent tours of the bullring are available when it’s not in use. 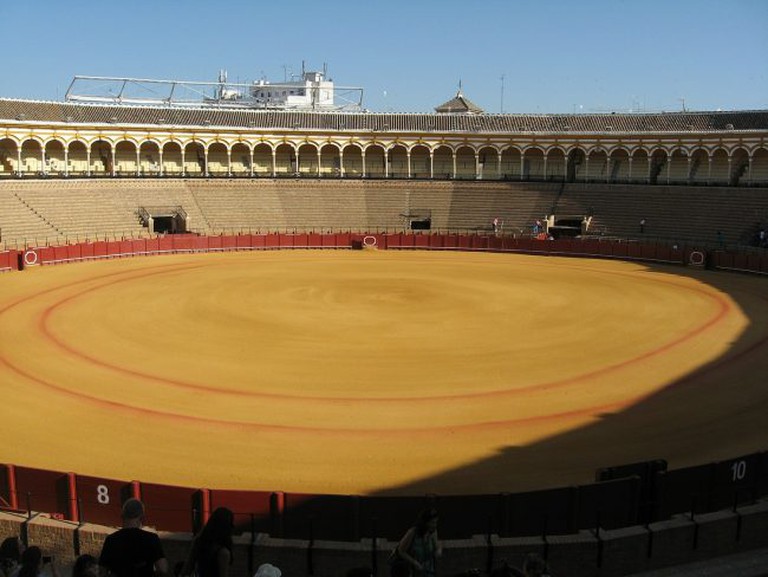 Seville’s former gypsy quarter of Triana sits the other side of the river from the main tourist attractions, but is one of the city’s must-see barrios. Narrow little streets weave between the colourful facades of its old buildings, which are attractively decorated with locally-made tiles and ceramics. These lively streets are also home to some of Seville’s most traditional tapas bars, the walls of which are covered with depictions of Triana’s weeping Virgin, old bullfighting posters and mounted bulls’ heads. The majority of Seville’s gypsies were moved to a grim housing estate on the edge of the city in the 1970s, but this neighbourhood has lost none of its Gitano charm or romance. 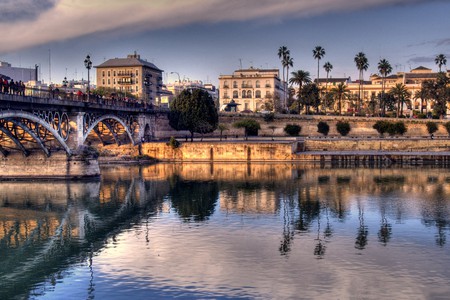 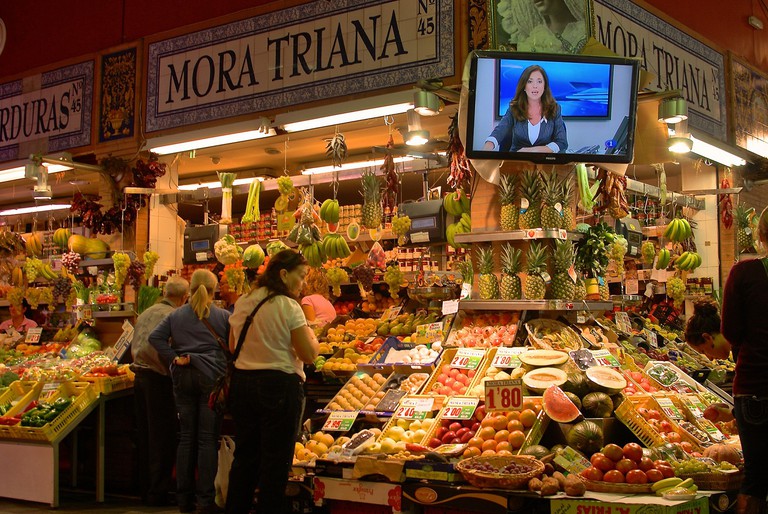 Mercado de Triana | © Karan Jain/Flickr
The crumbling stone walls of Triana’s principle market are all that remain of the San Jorge castle on which it was built, providing a suitably historic feel to this colourful, chaotic collection of stalls. During the week, Triana market is busy with local housewives snapping up the latest produce and enjoying voluble catch-ups (in the middle of the aisles, of course), whilst at the weekends the stalls close down and it becomes one of the coolest places to eat and drink in the neighbourhood. A super-friendly restaurant near the north entrance, for example, does amazing platters of the freshest fried fish you’ll come across in Seville.
Open In Google Maps
6 Calle San Jorge, Sevilla, Andalucía, 41010, Spain
+34674074099
Visit Website
Give us feedback

Upon first visiting, it’s virtually impossible not to become completely disorientated in what used to be Seville’s Jewish quarter, the streets of which are so narrow they make Triana’s look like Parisian boulevards. But getting lost in the other-worldly neighbourhood of Santa Cruz, into which the city’s sizeable Jewish population was crammed by Ferdinand III when he took Seville from the Moors in 1248, would hardly be a waste of time: its beautiful whitewashed houses, ornate churches and many secret squares and corners make for intriguing exploring. 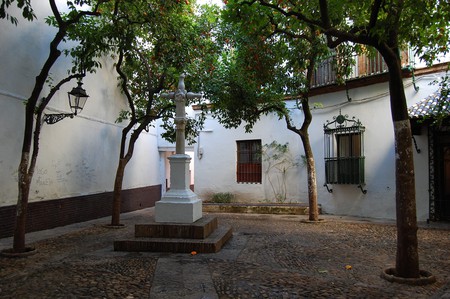 Museum
Facebook
Email
Twitter
Pinterest
Copy link
Share
Map View
Though not as closely associated with the art as, say, Cádiz or Granada, Seville’s flamenco scene is one of the best in southern Spain. The gypsy population that was once housed in Triana has continued to produce some remarkable flamenco talents since being moved to a dreary, crime-ridden sink estate on the city’s southern edge in the late 1970s. In fact, Sevillanas aficionados are likely to tell you that this notorious neighbourhood – Las Tres Mil Viviendas, or ‘the Three Thousand Homes’ – is where to head for the rawest, most passionate flamenco in the city. Should you feel like sticking to the centre, though, there is no shortage of bars and theatres offering nightly performances of an art form so integral to Seville’s culture. These vary in quality, but particularly good are the shows at the Museo del Baile Flamenco (Flamenco Dance Museum) in Santa Cruz, which feature some of the best artists from Seville and elsewhere in Andalusia.
Open In Google Maps
3 Calle Manuel Rojas Marcos, Sevilla, Andalucía, 41004, Spain
+34954340311
Visit Website
Give us feedback 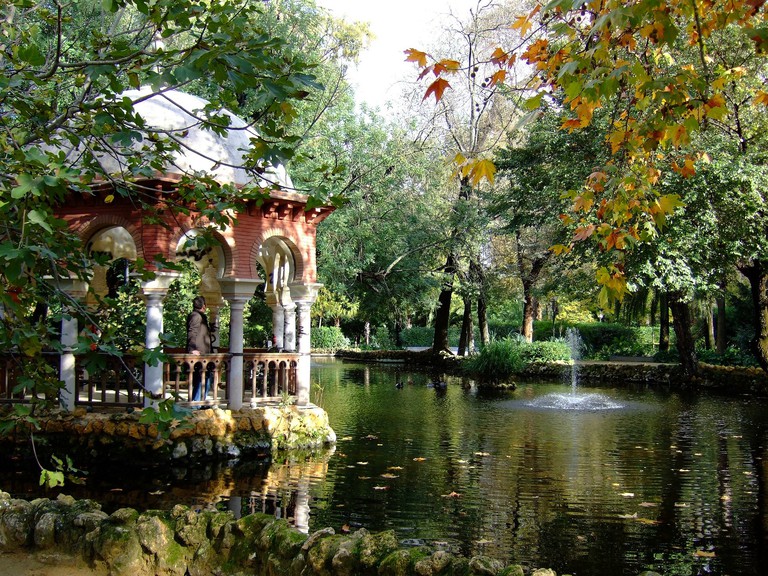 María Luisa Park, Seville | © Ramallo/Pixabay
In preparation for Seville’s hosting of the Ibero-American fair in 1929, the southern end of the city underwent extensive remodelling and renovation. At the centre of this project were the buildings of the the Plaza de España (see above) and the María Luisa Park, a 100-acre ‘Moorish Paradise’ just minutes from the busy city centre. Nowadays, the park is Seville’s principal area of greenery and its many shaded walkways and secluded spots make it an ideal getaway from the city’s soaring summer temperatures. It is home to a number of ducks, swans, doves and green parrots, and contains monuments to writers Gustavo Adolfo Bécquer and Miguel de Cervantes.
Open In Google Maps
s/n Paseo de las Delicias, Sevilla, Andalucía, 41013, Spain
+34955473232
Visit Website
Give us feedback
Give us feedback