This World-Famous Painting Was Banned for a Shocking Reason 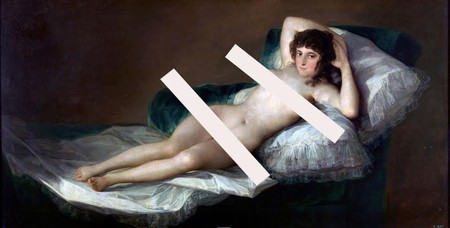 This portrait is so titillating that it was actually seized by the authorities!

Spanish artist Francisco Goya’s La maja desnuda is often considered the sexiest painting of all time. Created between 1797 and 1800, it portrays a very confident female lying naked on a green velvet chaise.

Propped up by two plump cushions, her hands rest behind her head in a suggestive ‘check me out’ type pose. Her gaze towards the viewer is direct and unashamed. This woman is proud of her body and not afraid to show it, which was revolutionary at the time (yay for girl power).

Furthermore, the work is the first known Western artwork to depict a woman’s pubic hair without negative connotations.

It is thought to have been commissioned by Manuel de Godoy to add to his extensive art collection. He actually had a separate secret closet reserved for nude paintings in which the piece was hung.

However, as fate would have it, the painting was discovered by the ecclesiastical authorities in 1808 and seized by officers of the Spanish Inquisition for its extreme imprudence.

The work was considered wildly inappropriate and deemed ‘so indecent and prejudicial to the public good’ that Godoy and his art curator were brought in for questioning and forced to reveal Goya as the artist. Thankfully all parties managed to evade prosecution and the artwork’s destruction by claiming the painting was in the tradition Titian and Velázquez, two respected painters that the church approved of.

The sexy artwork now hangs in the Prado museum in Madrid and is pretty much just as blush-worthy as it was back then.