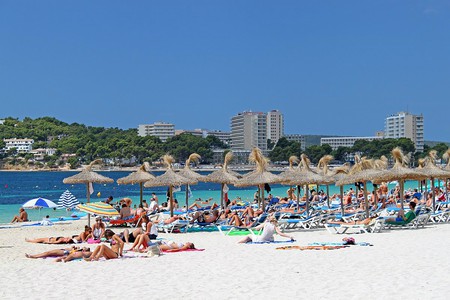 One of Spain’s most popular resorts is cracking down on “alcohol tourism” with a new campaign aimed at rowdy British tourists.

The Spanish resort of Magaluf, on the Balearic island of Mallorca, has long been notorious for its wild party scene.

A firm favourite with British tourists, it attracts thousands of young travellers every year, but a new campaign launched by the town council is urging visitors to stop behaving badly.

The town council has put up posters around the resort warning tourists of the severe fines they face for infractions, including drinking on the street and getting naked in public.

Posters, in English and Spanish, feature the hashtag #havefunwithrespect and warn tourists that they face hefty fines of €500 for drinking in the street and €400 for public nudity.

According to the local council, the posters have been put up to “encourage citizenship”. In 2017 alone, 785 complaints were filed against people for drinking on the street and 68 for people wandering around naked.

The move is just the latest in a series of measures cities across Spain are taking to try to control issues arising from tourism.

The Mallorca capital of Palma announced in May that is was banning holiday rentals on sites like Airbnb after complaints from locals about the rise in rents caused by short-term rentals.