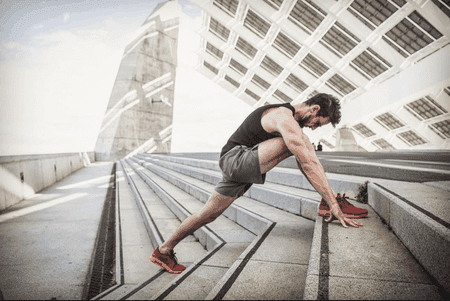 With its city beaches, spectacular architecture and cool urban landscape, Barcelona boasts some pretty incredible places for an outdoor workout. Whether it’s making the most of the city’s infrastructure or enjoying some pretty awesome scenery while exercising, these Instagram posts by personal trainer Martin Ebner of Ebylife will make you fall in love with Barcelona – and want to get fit too.

Flying high Fridayyyyyyyy!!! ✈️ What you all up to this weekend? Photo credit: @josscanshoot #ebylife #barcelona #tgifridays

Box Jumping my way into the weekend! 💪🏻 Wishing you all a great weekend! 🎉 #tgifridays #ebylife #bcn #boxjumps #personaltrainer

Barcelona is an architectural wonderland, with some of the most renowned architects of our time having left their mark on the city. This futurist design by Japanese architect and Pritzker Prize-winner Toyo Ito belongs to the Gran Via Fira de Barcelona.

Sunday funday! Hope you all had a super weekend peeps!! 🎉 #sunday #springintoshape #ebylife

Jumping straight into the work week! 👊🏼

Jumping straight into the work week! 👊🏼 I hope you've all have a productive start to the week!? #personaltrainer #ebylife #barcelona

The Parc del Forum is a multi-functional space on the waterfront of Barcelona, hosting concerts, seminars, outdoor events and more. It also happens to be a great spot for a workout thanks to its contemporary architecture, urban infrastructure, public artworks and epic views.

Striding full speed into the weekend!! 💪🏻 What you all up to this weekend? Photo credit: @josscanshoot #personaltrainer #barcelona #ebylife

A cheeky throwback to my very first encounter with Anella olympica, the place I now call my office! 👌🏻 #barcelona #personaltrainer #ebylife

The 1992 Barcelona Olympic Games are considered a turning point in the city’s history, transforming it into the cosmopolitan tourist destination it is today. Montjuïc hill was the main site for the games and much of the infrastructure remains open to the public today, while the Telecommunications Tower – designed by controversial architect Santiago Calatrava – is one of the city’s most iconic landmarks.

Hello Friday!!! ☀️☀️ What you all up to this weekend? #tgifridays

Procrastination will get you nowhere! Kick start the week the way you mean to go on! 💪🏻. #personaltraining #barcelona #ebylife

Spring has sprung in Barcelona! ☀️ what you all up to this week? #barcelona #personaltrainer #ebylife

Once upon a time Poblenou was the industrial heart of Barcelona, home to hundreds of factories. These days the warehouses are being converted into trendy loft apartments and co-working spaces. New spaces like the iconic Torre Agbar have also helped give a fresh face to the neighbourhood.

One of the things that makes Barcelona such an incredible city is the blending of old and new, the industrial and the ornate, the avant-garde and the traditional. One minute you’re jogging past a run-down block of flats, the next minute you’re staring at an edgy piece of street art or a Modernist landmark. The bottom line is, always keep your eyes peeled and you’ll be amazed by what you stumble upon.

I love taking my workouts to the beach! 💪 ☀️ #Becomethebestversionofyou #ebylife

Last but not least, of course there’s always the beach… and Barcelona beaches have everything you need for a good workout. From designated swimming lanes in the sea, to outdoor exercises machines, volleyball nets and climbing frames.

For tailor-made personal training and fitness solutions in Barcelona check out Ebylife.