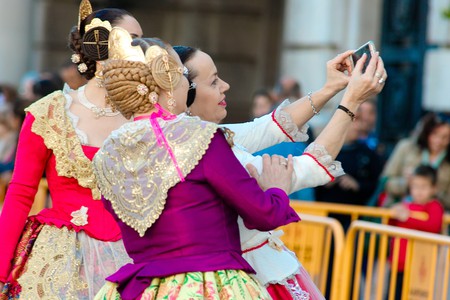 Forget Christmas – by far the biggest, most important and anticipated festival in the Valencia region is Las Fallas. Schools and offices shut down, and the entire city gets in the party mood, not only for the official week of Las Fallas (the main days of the festival are March 15-19), but excitement gradually builds in the weeks before, with official events starting on March 1. There’s a lot to see and experience at this incredible festival, which dates from the Middle Ages and was given UNESCO heritage status in 2017. But here are some of the most important events and traditions that you won’t want to miss.

This festival is all about fire and explosions, and while Valencians love taking the opportunity to set off fistfuls of firecrackers in the streets, there are also some incredibly impressive official firework displays held each Saturday night during March. Join the crowds on the banks of the dry Turia riverbed to see the incredible shows, of a scale and quality rarely seen elsewhere.

Every day from March 1–19, you can (and must) experience the mascleta. Best described as ‘noise fireworks’, this uniquely Valencian display is all about the sound, vibration and rhythm of countless explosions over a five-minute period. It happens every day at 2pm in the city’s main square, though you can here it all over town. Arrive at least half an hour early to get a good spot (for Valencians that means getting as close to the rows of explosives as you can.)

From the beginning of the month, the whole city gets progressively noisier until the deafening climax – the biggest mascleta of all on March 19.

During the actual week of the festival, the whole city is transformed during into an outdoor art gallery filled with 350 huge, elaborately-painted sculptures made from wood and papier mâché; reaching ten or fifteen metres high, they often make a satirical comment on political and public life over the past year, and you may recognise some famous faces. 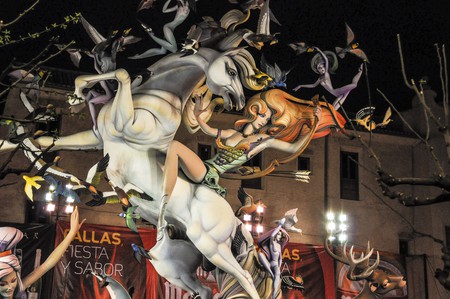 Las Fallas sculptures in the streets of Valencia | © keith ellwood/Flickr

The aesthetic of the Las Fallas sculptures has evolved over the years, where once many were eerily lifelike, but now artists often go for an exaggerated, cartoonish style inspired by manga or Disney. Just walking or biking around the city is the best way to take in as many of the different displays as possible, and you can also see many more examples at the Fallas Museum, including one designed by Salvador Dalí in 1954.

By night, the city becomes one big street party, with mobile discos springing up in the streets. The city also organises a programme of outdoor concerts and other events, including shows at the city’s rarely used bullring. There are also a large number of parades organised by the city and its various falla organisations. See the Valencia Tourism website for up-to-date event listings.

Another spectacle you won’t want to miss is the light show held in the streets of Ruzafa during the main days of the festival, where light tunnels and elaborate shows set to music are created. The light technicians come over from Italy, and these shows bear more than a slight resemblance to those seen at Carnival all over Italy in February. 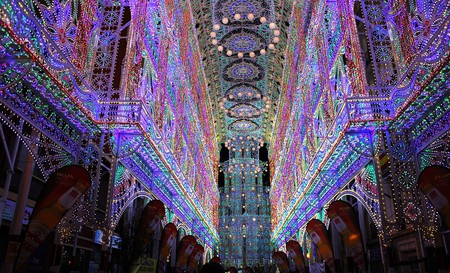 The party comes to an end at midnight on March 19, when all the sculptures are set alight. The mood on this night is sombre and quiet, a surprising contrast to the last few weeks of wild partying. Brass bands play and crowds look on silently as the sculptures vanish into the flames. The burning of the sculptures signifies the end of winter and new beginnings – think ‘out with the old, in with the new’.