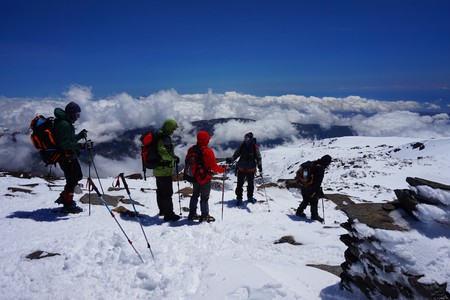 Situated in the middle of Granada’s Sierra Nevada natural park, the 3,479 metre Mulhacen is mainland Spain’s highest mountain. Not for nothing is the peak of this snow-capped giant known as ‘The Roof of Spain’ – as you’ll see for yourself when you follow our guide to safely reaching Mulhacen’s lonely summit.

The most direct routes to the summit of mainland Spain’s tallest mountain start from Hoya del Portillo, a parking and picnic space a few miles above the beautiful town of Capileira in the Alpujarra region. After parking your car and stretching, take the path up through a shady, aromatic pine forest. Half an hour or so later you exit the forest and get your first sight of the snow-capped giants that await you: a jagged spine of peaks stretches across the horizon, reaching up into a dark, hard blue of an Andalusian sky. At this point, you have the option of splitting your hike over two days and heading for the Poqueira refuge, which offers a bed in a shared dormitory and dinner for 34 euros per person (but be sure to book by phone in advance). It will take about two hours to reach the Refugio Poqueira (which is at 2,500 metres) from Hoya del Portillo and summitting Mulhacen the following morning will take you about another three hours. 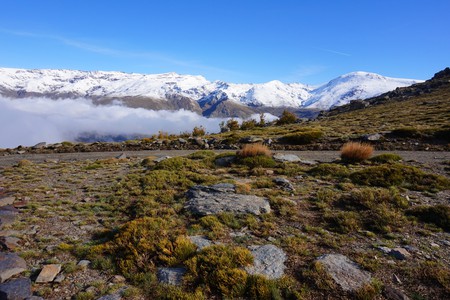 First sight of Mulhacen (on the far right) on the track from Capileira; Encarni Novillo

It is possible, though, to hike to the top of Mulhacen from Hoya del Portillo and and return in a single day – a truly epic adventure for which you should allow a good nine or ten hours. Upon reaching the Poqueira junction, a shortcut takes you over a gentle hill (a nice warm up for what lies further ahead), after which you regain the main path that takes you up onto the southern slopes of Mulhacen. If you’re trekking between November and the end of May this is where you’ll encounter the first snow and ice, but even so the walking here is undemanding, leaving you plenty of time to survey the awesome expanses of glittering white land, towering mountains and limitless sky that surround you. It’s also a good stretch on which to take in some fuel – such as energy bars or bananas – for the final ascent. 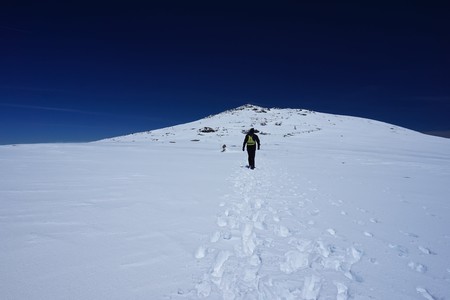 Hiking up the mountain’s southern slopes with the summit in view; Encarni Novillo

After about another hour of trekking through some of Spain’s most humbling scenery, the slopes start to rise dramatically. This is the final approach to Mulhacen’s summit and if you’re doing it in the snow you will need full protection from the potentially dangerous glare of reflected sunlight. Good UV-proof sunglasses, headwear and sun cream are all absolutely essential, as is sturdy, waterproof footwear (the snow can be a couple of feet deep here, even in May). Hiking poles and crampons aren’t essential, but will make climbing in the snow easier. Even with these optional extras, though, tackling this part of the route is difficult and energy-sapping – each step requires attention and care and the thinner air makes you work harder for each metre you advance. Adding to the physical challenge is the wind, which can be ferocious this far up the mountain, particularly on the western flank’s exposed final stretch. 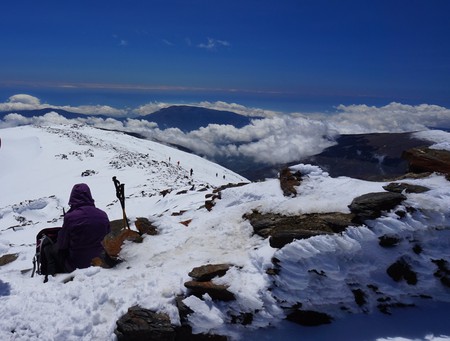 Made it: not for nothing is the summit of Mulhacen known as ‘The Roof of Spain’; Encarni Novillo

This route’s finale plays weird games with your mind, as a series of slopes and undulations frequently obscures the summit from view, making you think you’re closer to it than you are. If this becomes demoralising – which it can do if you’re fighting the snow and wind as well – just take each step at a time and keep focused, because the sense of achievement upon reaching the top of the Iberian peninsula’s highest mountain is huge. The summit and the vast, uninhabited expanses below are eerily beautiful: clouds drift and shape around you, weaving their fragile forms in thin air, and scattered about are piles of rock that look like unfinished towers in a giant’s aborted game. After appreciating the incredible views whilst re-fuelling, it’ll be time to start the 3.5 hour journey back down to Hoya del Portillo – and if that sounds like an awfully long time after the trek you’ve already completed, just remember that this time it’s downhill all the way.