The Top 10 Things to Do in Sitges, Spain 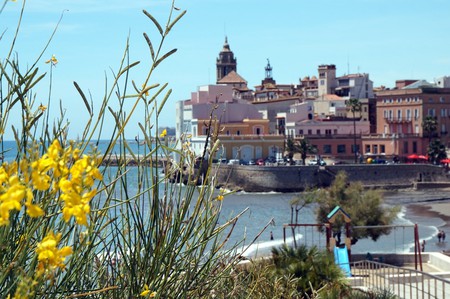 Located just 30 minutes south of Barcelona, Sitges has been described as the Saint-Tropez of Spain thanks to its glitzy beach crowd and lively nightlife. Renowned for its LGBT-friendly atmosphere as well as its world-famous horror film festival, Sitges has plenty to offer visitors.

A day at the beach

A seaside town, Sitges boasts some beautiful beaches right on its doorstep. The Platja de Sant Sebastià, located to the east of the town is rather small but family-friendly, whereas the Platja la Bassa Ronda is the main gay-friendly beach and one of the largest and busiest in the summer.

Today a museum, the Cau Ferrat building was once the home of Catalan artist Santiago Rusiñol, one of the leading figures of the Catalan Modernist movement. Upon his death, the artist bequeathed the house and its contents – including drawings, paintings, ceramics and more – to the town of Sitges on condition that it be opened to the public as a museum. 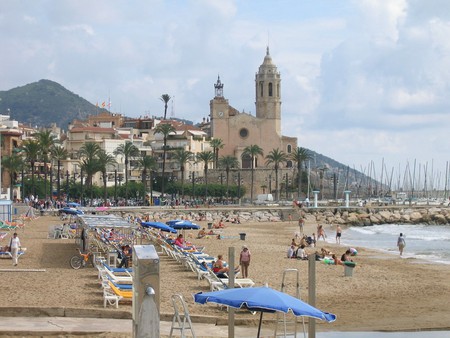 Enjoy seafood in a traditional restaurant

The proximity to the sea is reflected in the cuisine of Sitges’s well-regarded traditional restaurants, which can be found along the waterfront and in the Old Town. Restaurants such as La Nansa and El Trull come highly recommended for their fresh fish as well as their hearty seafood rice dishes.

Stroll along the Passeig Maritim

A wide pedestrianised boulevard stretching along the waterfront, the Passeig Maritim is one of the most scenic walks to be enjoyed in Sitges. The walkway is lined with cafés, restaurants and ice cream shops, so there are plenty of opportunities for refreshment along the way. 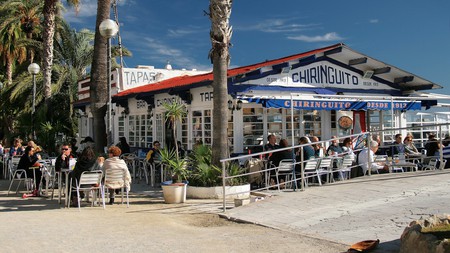 A beach bar on the waterfront | © Jorge Franganillo / Flickr

Barcelona may be the bigger city, but everyone knows that when it comes to carnival time – at the end of Lent – Sitges is where the party is really at. One of the loudest and brightest carnivals along the Catalan coastline, the Sitges carnival is famous for its colourful floats, bold fancy dress costumes and wild after-hours parties.

If the Old Town of Sitges is not particularly large, it is nonetheless worth exploring, in particular the old fishermen’s neighbourhood and its white houses with blue borders, as well as the 15th-century Church of Sant Bartomeu and Santa Tecla and its Baroque interior. 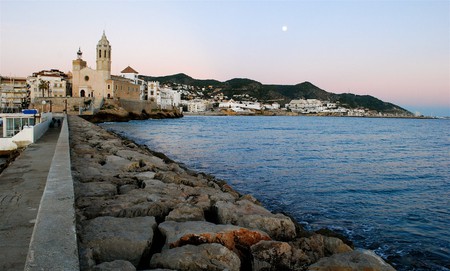 If most people associate Bacardí Rum with Cuba, what they ignore is that the story actually begins in Spain – and more precisely Sitges – where founder Facundo Bacardí Massó was born in 1814. Today the Casa Bacardí talks of the brand’s heritage and the process of making rum, as well as offering the guests to try some rather delicious cocktails in the bar at the back.

Walk in the Garraf Natural Park

Sitges is surrounded by the Garraf Natural Park, located on the small mountain range known as the Garraf Massif. From Sitges, there are a number of marked walks which can be completed within a day round-trip or getting the train back along the coastline from the next town. Along the way you will come across a Buddhist Monastery and abandoned villages. 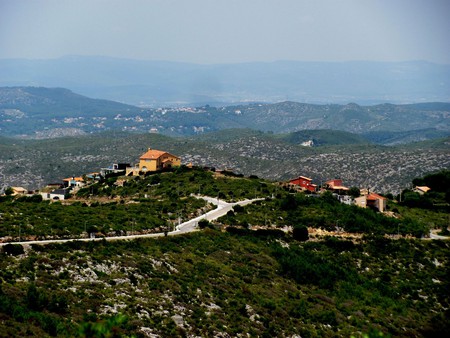 A night out in Sitges’s bars

A trip to Sitges wouldn’t be complete without a night out when the town centre dons an altogether different appearance thanks to its numerous LGBT-friendly bars, cocktail places and nightclubs. If the Carrer del Pecat or ‘Street of Sin’ doesn’t sound quite like your scene, then the Carrer Santa Bonaventura could offer a tamer night out. Check out El Piano bar for larger-than-life drag acts, or the Skybar in the MiM hotel for impressive vistas from the rooftop bar.

Last but not least, if you can time it right, the Sitges Film festival is really worth checking out. Previous editions have hosted the likes of Sir Anthony Hopkins, Quentin Tarantino and Cameron Diaz – although one of the highlights is undoubtedly the Zombie Walk, which is organised each year and sees hundreds of gruesome zombies parade through the city centre before finishing with a live music ball. 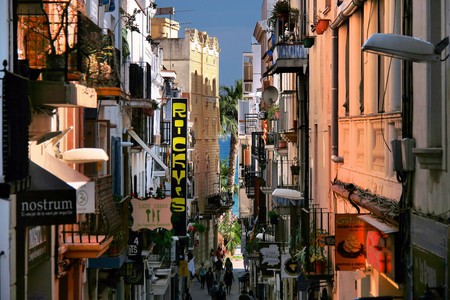 Explore the nightlife in Sitges | © Jorge Franganillo / Flickr
Give us feedback