The Top 10 Things to See and Do in Peniscola, Valencia 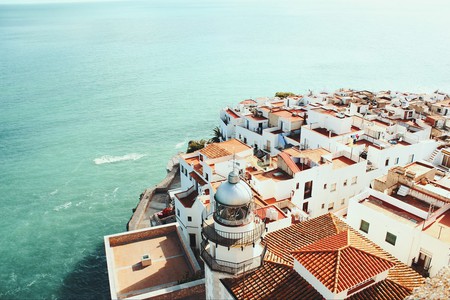 Peniscola, meaning ‘almost an island’, is known for its striking Templar castle perched high on a rock, and is seemingly almost surrounded by the Mediterranean Sea. Between Barcelona and Valencia on the sunny Costa del Azahar, it also boasts seven kilometres (four miles) of sandy beach. Here are some of the best ways to spend time in this unique town.

Peniscola is stunning from a distance, but it’s even more interesting once you get inside those medieval castle walls and explore its winding cobbled streets, packed with history. The tiny Old Town rises 64 metres (210 feet) above sea level and many of its houses, shops and restaurants have uninterrupted views out over the Mediterranean, even more so as the town has forbidden the installation of TV antennas on buildings here, keeping the view much as it has been for centuries. 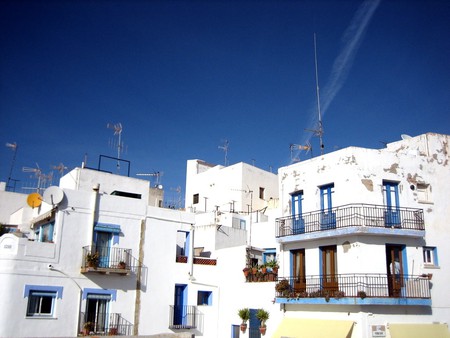 The castle of Papa Luna

The focal point of the Old Town, and the whole of Peniscola, is its majestic castle. Formerly the residence of exiled Papa Luna, it has a curious history and plenty of atmosphere, as well as panoramic views. Climb to the highest point to look out through the window at the same view of endless blue sea that Papa Luna looked out at, hopefully scanning the horizon for the ship that never came to take him back to Rome.

No Spanish holiday would be complete without relaxing by the sea with some beers and tapas, and this local bar is the perfect place to do it. Of the several craft beers on tap, their specialty is the homemade artichoke beer, as the local area is famous for growing some of the best artichokes in Spain.

Another Old Town marvel is this little house, squeezed in among many others on a narrow street, but easy to spot because of its curious facade. It has cheerful bright-blue shuttered windows and, as the name suggests, it’s completely covered with shells. It’s no historical building, but it has a beautiful story that began with the birth of tourism in Peniscola.

Peniscola has its own lighthouse, dating from 1892, and you’ll spot it on your way out of the main castle gates. The Faro’s signal reaches for 56 kilometres (35 miles) and has long helped local sailors navigate the rocky coast. You can climb up for a great view of the castle and the sea. 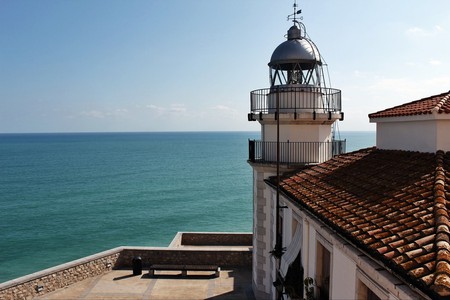 As Peniscola is a seafaring town, it’s no surprise that its maritime heritage is of huge importance. The Museum of the Sea pays homage to local seafaring traditions, and is packed with anchors, bronze helmets, model ships and aquaria.

Peniscola’s main festivals are held in September. Between September 6 and 17, the town is full of expressive dance performances that pay tribute to the Virgen de la Ermitana, Peniscola’s patron saint. The dances, often warlike and dramatic, recall the town’s origins, and the final performance is the castell, a kind of human tower.

The final days of the festivals see the streets explode in a riot of colour as the town reenacts the battle of the Moors and Christians, a popular festival held in towns all along Spain’s eastern coast and featuring parades, concerts, fireworks and bull running. 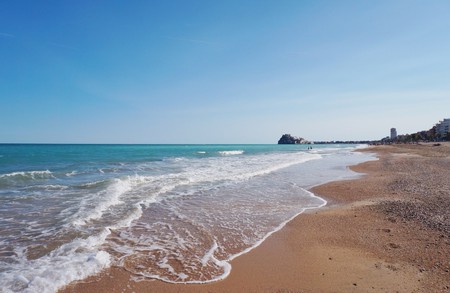 A natural curiosity found in Pensicola, El Bufador is a cavity formed by waves, located near the castle’s San Pedro Gate. It’s a dramatic sight when the waves are big, as the water floods into the cavity before whooshing out with great noise and force, spraying bystanders with foam.

Peniscola is surrounded by nature, and there’s plenty of space to think and enjoy the views in the green Sierra de Irta natural park. Along the coast, you’ll discover plenty of hidden coves, many of which are accessible on foot and offer a little piece of paradise where you can sunbathe undisturbed.