The Best Things to Do in Oviedo, the Capital of Asturias
Visit Oviedo Cathedral in Asturias | © javier.losa / WikiCommons
Spain / See & Do

The Best Things To Do in Oviedo, the Capital of Asturias

Oviedo is the capital of Asturias, the north-westerly region of Spain perhaps best known for its cider. From a boisterous annual feria (fair) to one of the country’s finest public art collections, these are the best things to do when visiting the elegant city of Oviedo.

Having appeared in the New York Times’ 2020 list of “52 Places To Go”, Asturias – a land of rolling greenery and rugged coastline – is in vogue. The best introduction to this often-overlooked region of northern Spain is a visit to its capital, Oviedo, a stylish city located on two pilgrimage routes to Santiago de Compostela. Whether you plan to visit its grand cathedral or sample the creations of two local, Michelin-starred chefs, here’s how to spend your time in Oviedo. 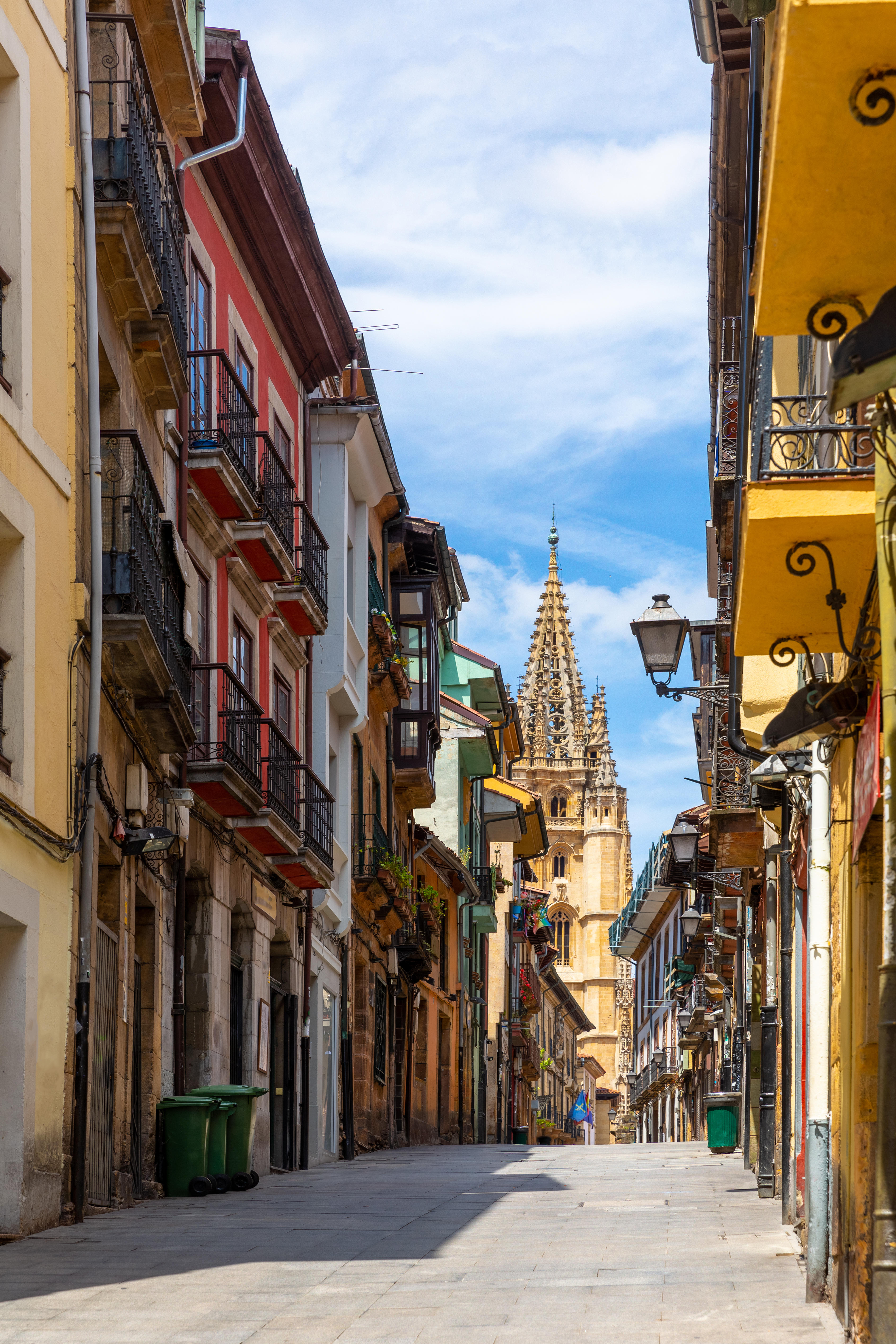 Oviedo is the capital of Asturias, a land of rolling greenery and rugged coastline | © Iakov Filimonov / Alamy Stock Photo

Oviedo’s raucous feria (fair) is held every September (it runs 13–21 in 2020) and marks the end of summer in high style. Inaugurated in the mid-15th century by Pope Eugene IV, the San Mateo celebrations feature attendees dressed in typical Asturian costumes, open-air bars and barbecues, firework displays and free daily concerts on the cathedral square. The 19 September is also America Day in Oviedo, when locals celebrate the links forged between Asturias and South American countries by emigration in the 19th and 20th centuries. 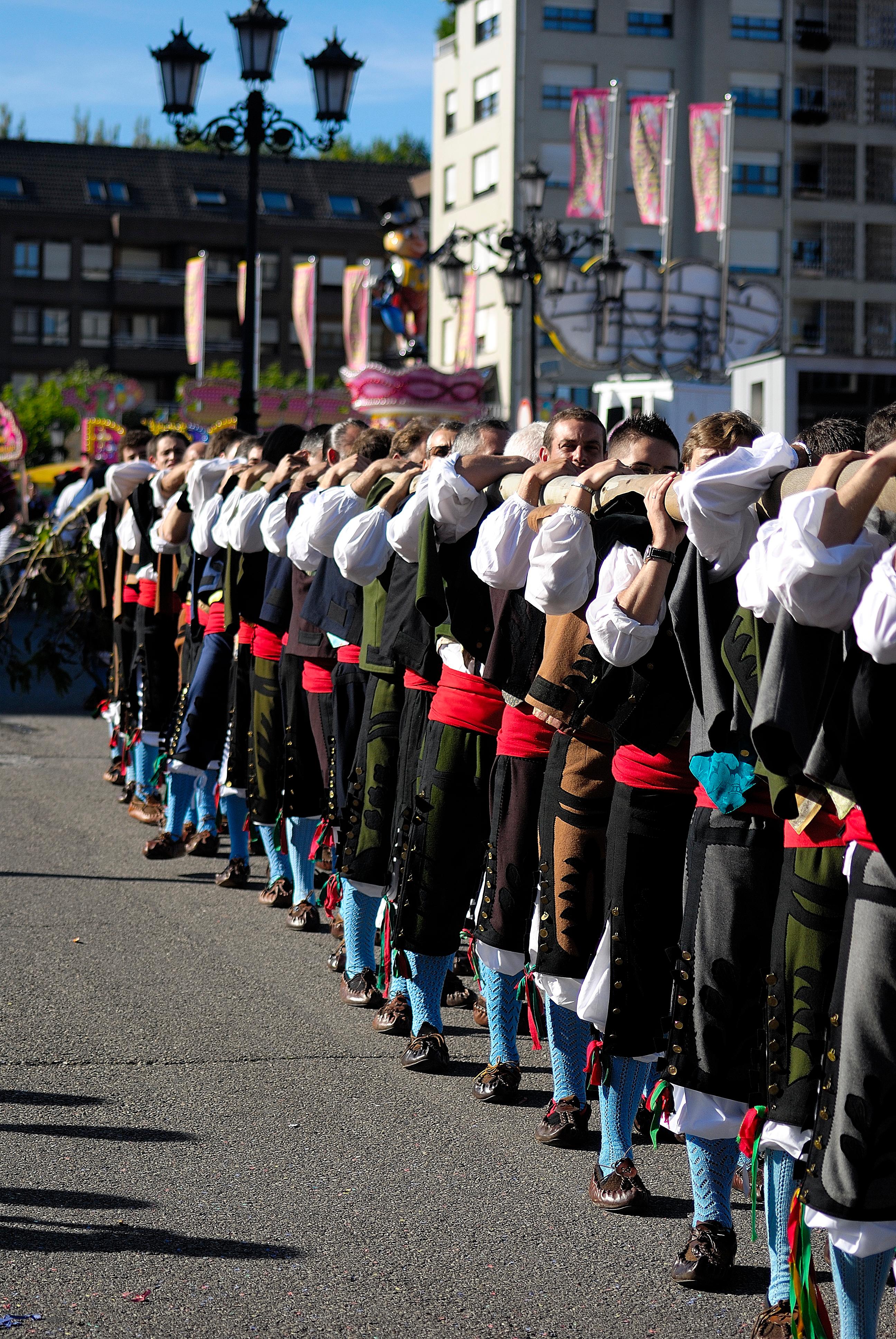 In September, Oviedo celebrates the links forged between Asturias and South American countries in the 19th and 20th centuries | © agefotostock / Alamy Stock Photo

The leafy paradise of the Campo de San Francisco is found in the heart of Oviedo, just up the road from the city’s market and town hall. Spanning 90,000 square metres (968,751 square feet), these lush spaces served as an orchard for the San Francisco Convent before being turned into a public park in the 1800s. There is plenty to admire as you stroll its romantic promenades, including a wide range of flora, ornate fountains and crumbling ruins. Particularly of note is the archway to the 13th-century San Isidro church, the only part of the building that survived demolition in the 1920s. 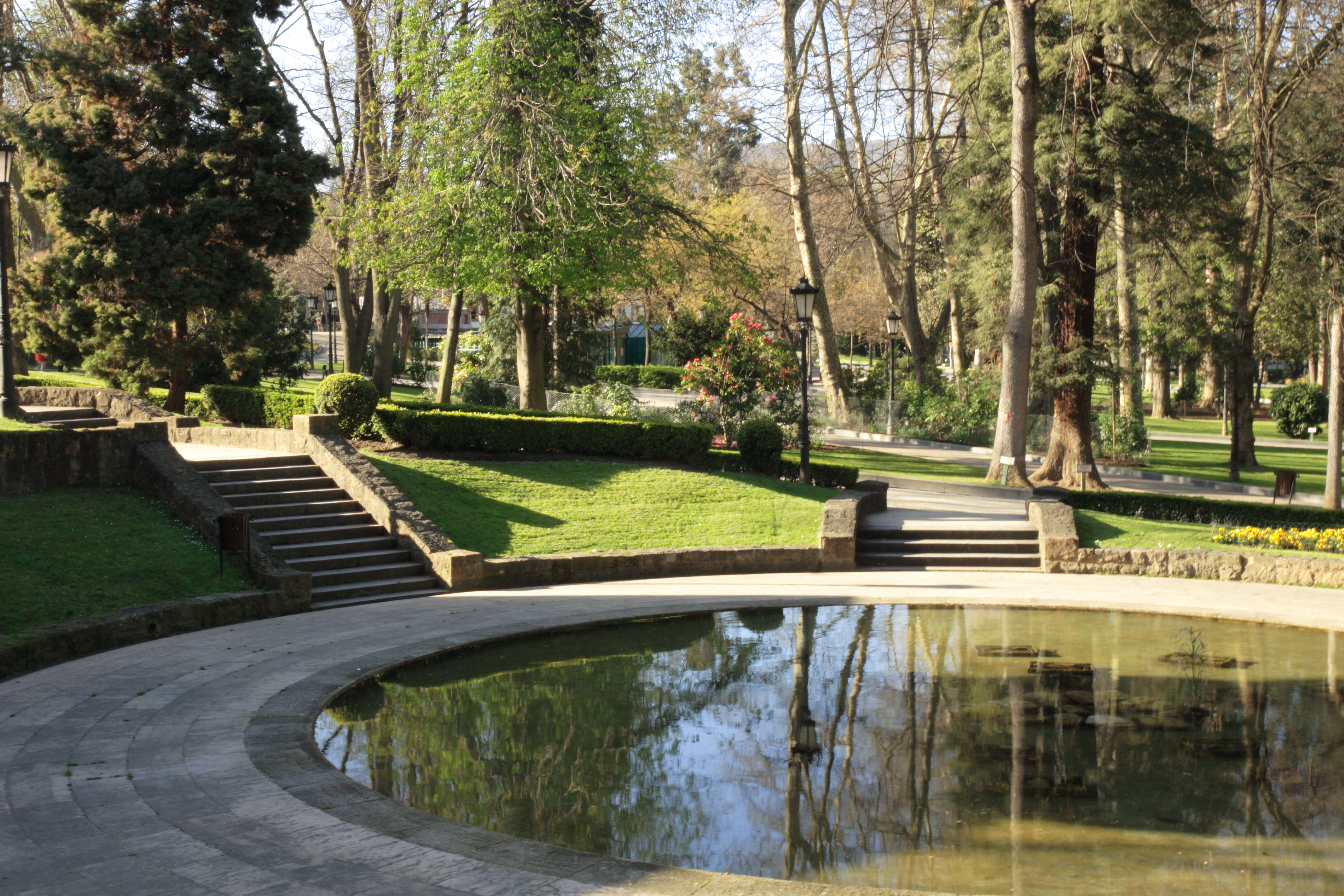 …and meet its resident cartoon character

While exploring the San Francisco gardens, go and meet the park’s resident cartoon character. Sitting on a bench in the middle of the park is a life-sized – or probably a little larger than life-sized – statue of Mafalda, the star of an Argentine comic strip that was hugely popular throughout Europe for its social satire (the comic ran from 1964 to 1973). The statue of the six-year-old philosopher was installed in 2014, when the princess of Asturias gave the cartoon’s creator, Quino, a prestigious award for his contribution to the arts. 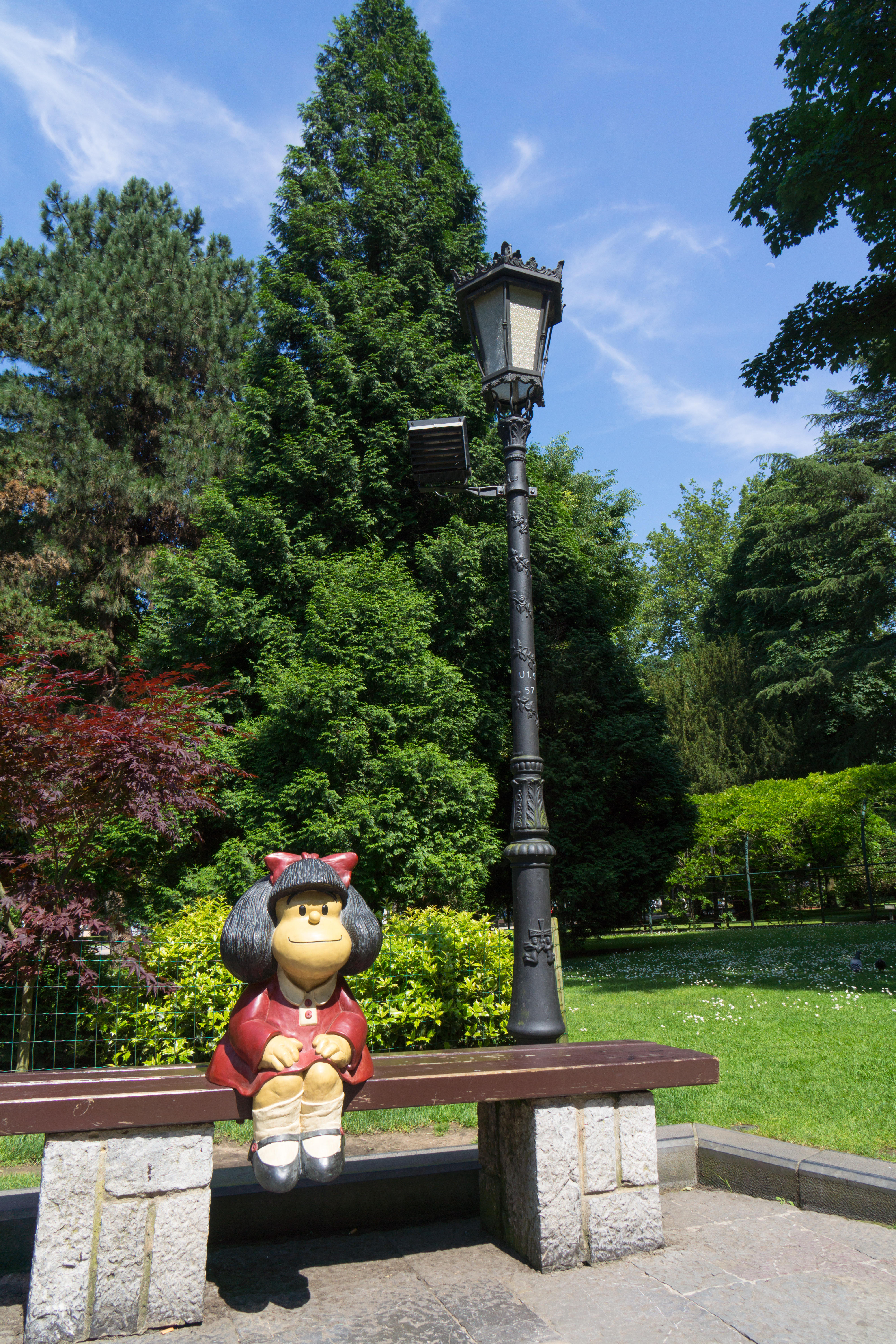 Pick up local produce at the Mercado El Fontan

No visit to a Spanish town or city is complete without a wander around its central food market. Oviedo’s is located in the city centre, in an elegant glass-and-iron structure built in the late-19th century. Within, you’ll find rows of colourful stalls (puestos), from which vendors volubly tout Asturian specialities such as cheese and cider, as well as meat, fruit, vegetables, herbs and spices. Browse among the crowd as shoppers exchange gossip and stop at one of the many surrounding terraces for a drink and tapas when you’re done. The Mercado El Fontan is best visited on weekday mornings. 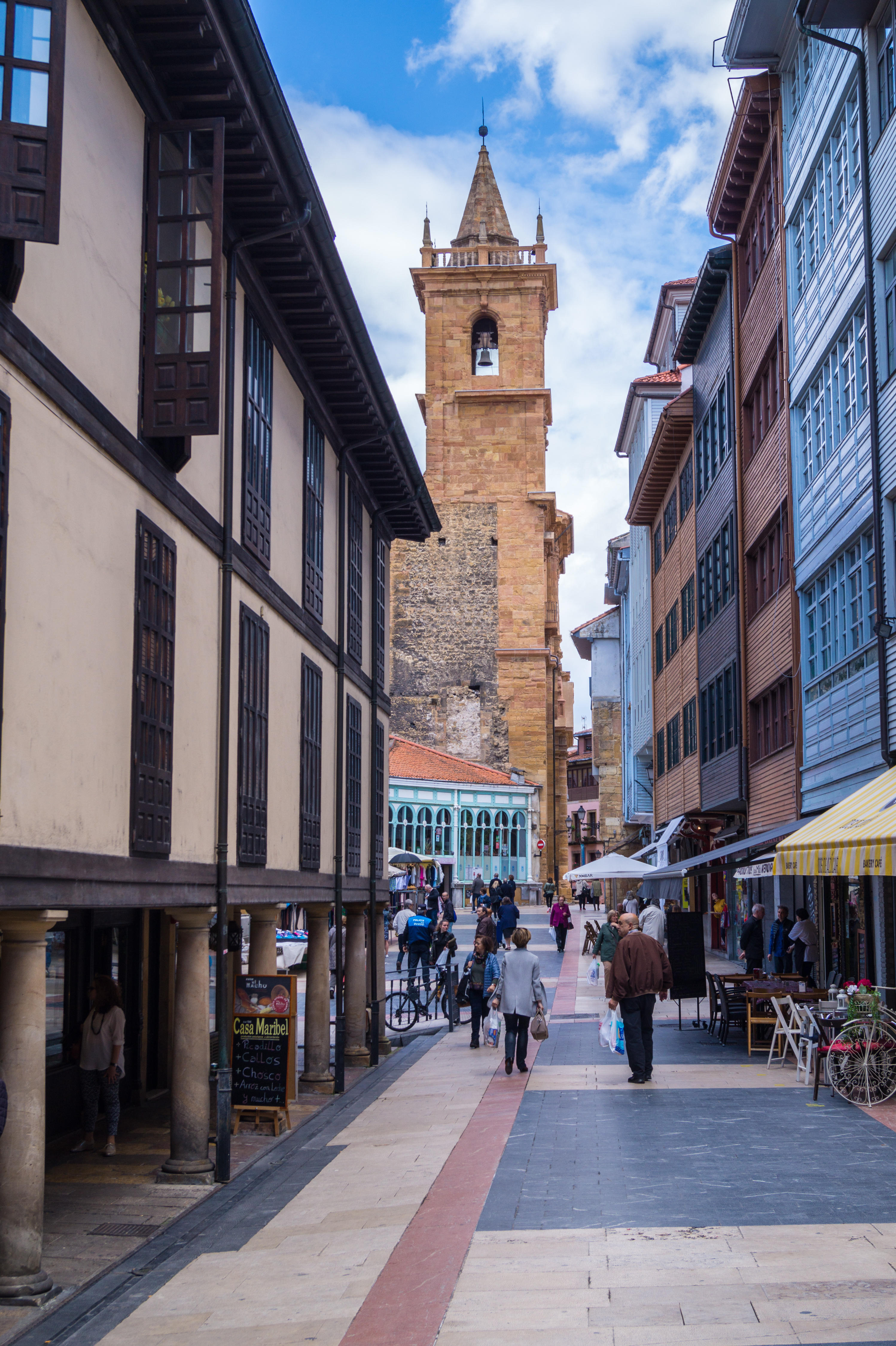 Drink cider at the ‘sidrerías’

Asturias is famous for its cider (sidra), and the region’s capital is packed with lively sidrerías in which to enjoy this speciality. The best place to head is Calle Gascona, a street in the centre that’s been nicknamed “Cider Boulevard” for a very good reason. At popular hangout La Pumarada, smartly-attired waiting staff pour the cider from high above your glass – the age-old method of oxygenating this dry, flat tipple. And if you’re after some local tapas to accompany your sidra, head down the road to Tierra Astur Gascona, a stylish franchise that offers boards of local hams and cheeses. 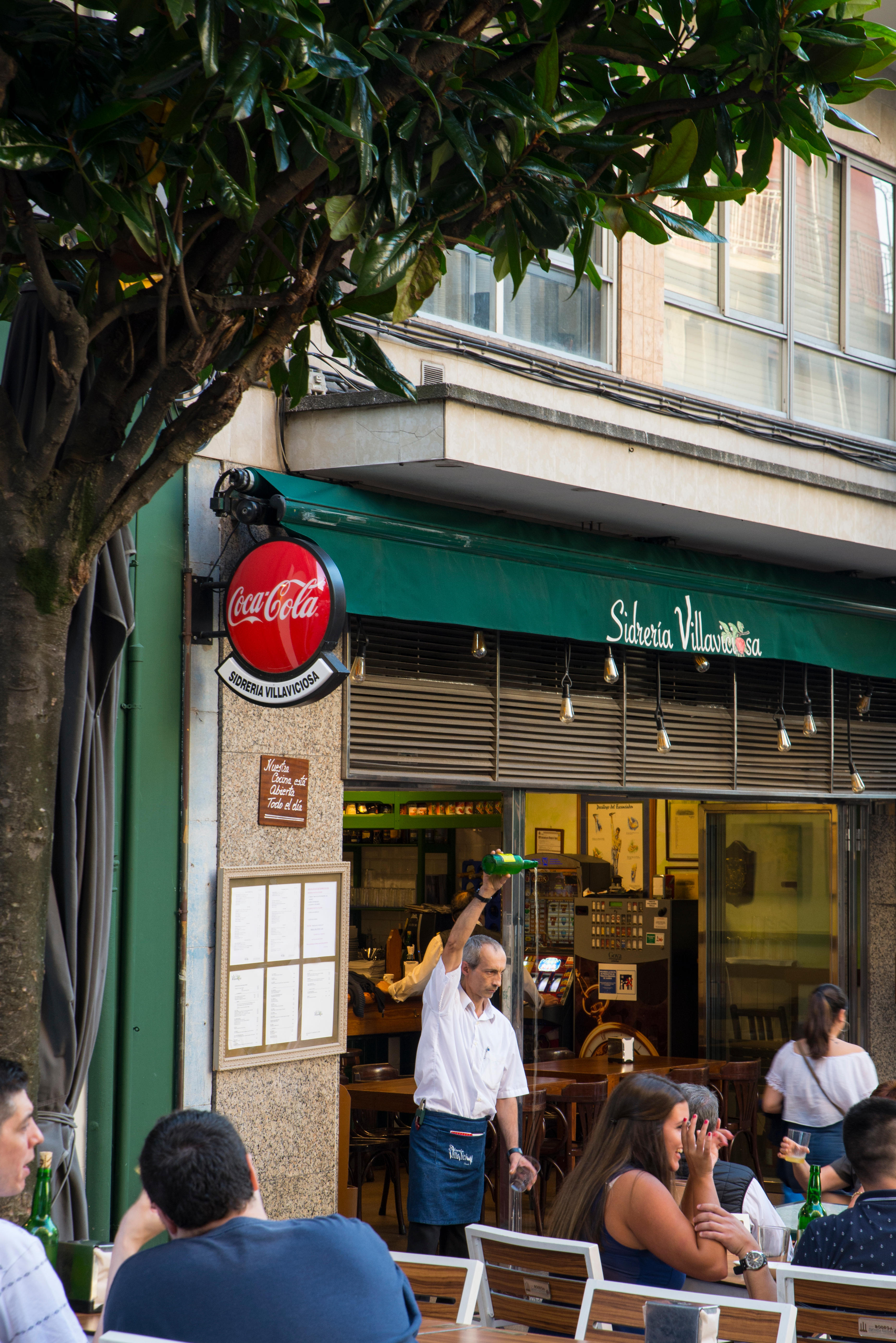 Oviedo is situated on the Camino del Norte, which stretches from Saint Jean de Luz in the French Pyrenees to Santiago de Compostela in Galicia, and is the starting point of the Camino Primitivo. Don’t leave the city without visiting the pilgrims’ San Salvador Cathedral on Plaza Alfonso II El Casto. The main structure dates from the late-14th century, but the tower was added in the mid-16th century, resulting in a blend of architectural styles. Inside, there’s a ninth-century, UNESCO-protected chapel where you can view a very special piece of cloth that is said to have been placed around Jesus’s head after his death, and two jewel-encrusted crosses. 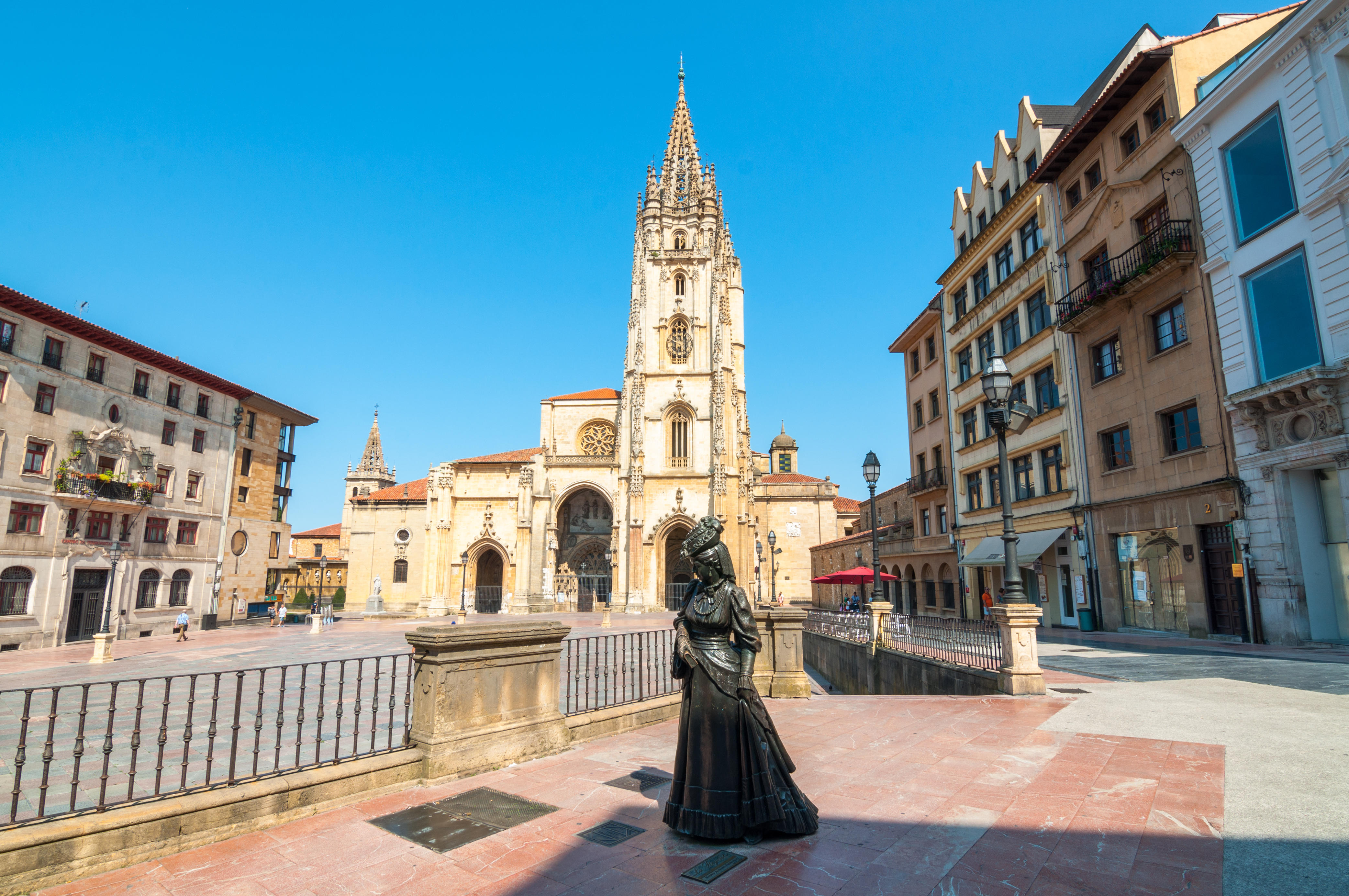 Go and see a spooky skeleton

For a dose of history, head to Oviedo’s Archaeological Museum, which is housed in a 16th-century monastery in the city centre. On the second floor, you can view the bones of a Bronze Age male, whose skeleton marinaded for centuries in a copper mine, soaking up sulphate and turning ghostly green in the process. The museum as a whole is well worth a visit, charting local history and customs from the prehistoric era through the Roman and Gothic periods. Another noteworthy exhibit is the 12th-century sarcophagus of Gontrodo Pérez, an Asturian aristocrat who became one of King Alfonso VII’s mistresses. 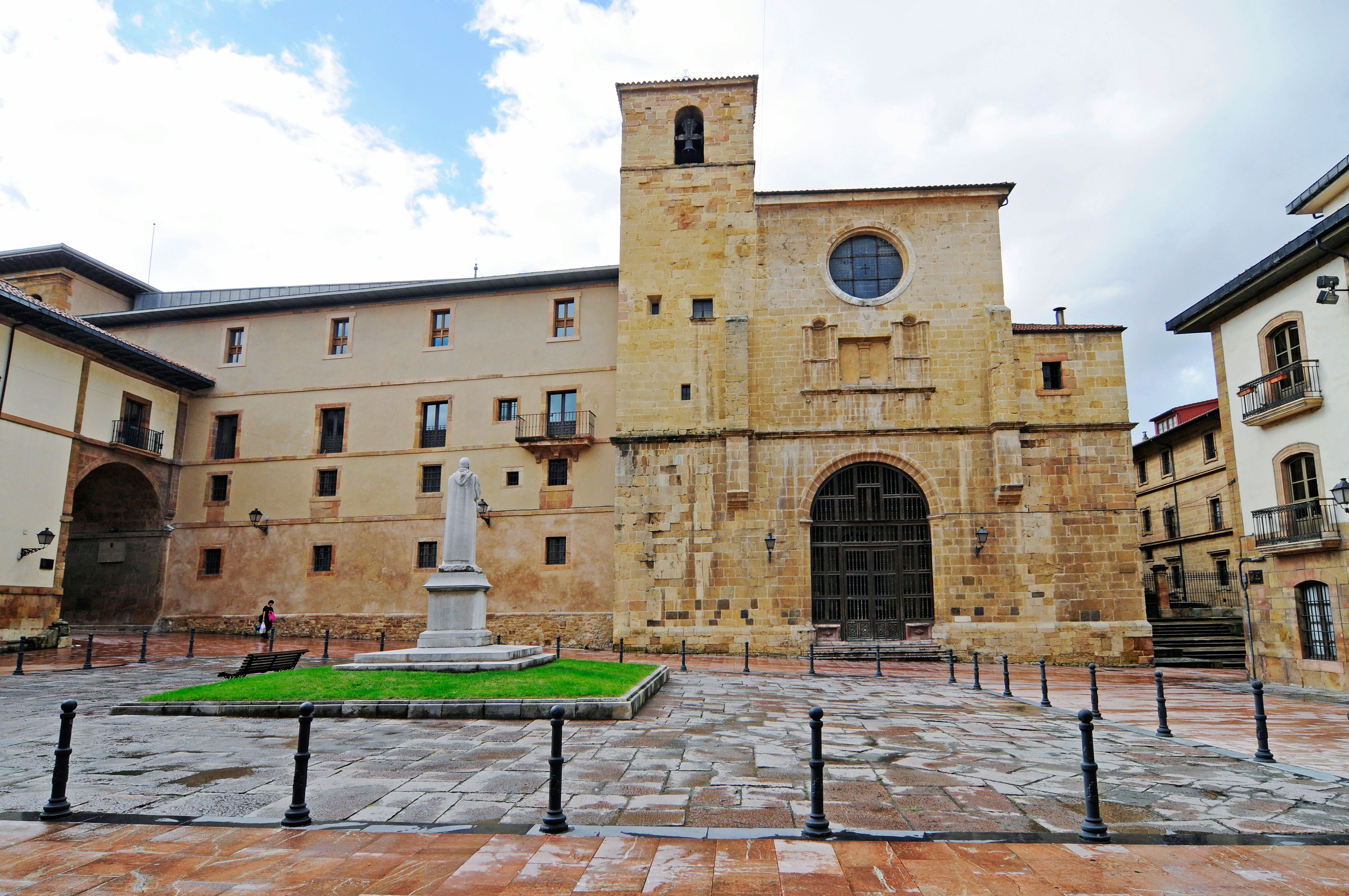 If you want a classy dining experience while in Oviedo, consider booking a table at Restaurante Gloria. Run by sibling chefs Esther and Nacho Manzano, proprietors of the double Michelin-starred Casa Marcial in Arriondas, the focus is on local produce, with the set menu featuring a different Asturian dish every day. Try a wonderful version of the fabada Asturiana, a hearty stew of beans, chorizo, pork and black pudding (morcilla), the tortilla and the croquetas. Tapas-sized dishes are available as well as full mains (known as raciones) and an extensive selection of wines, beers and ciders. 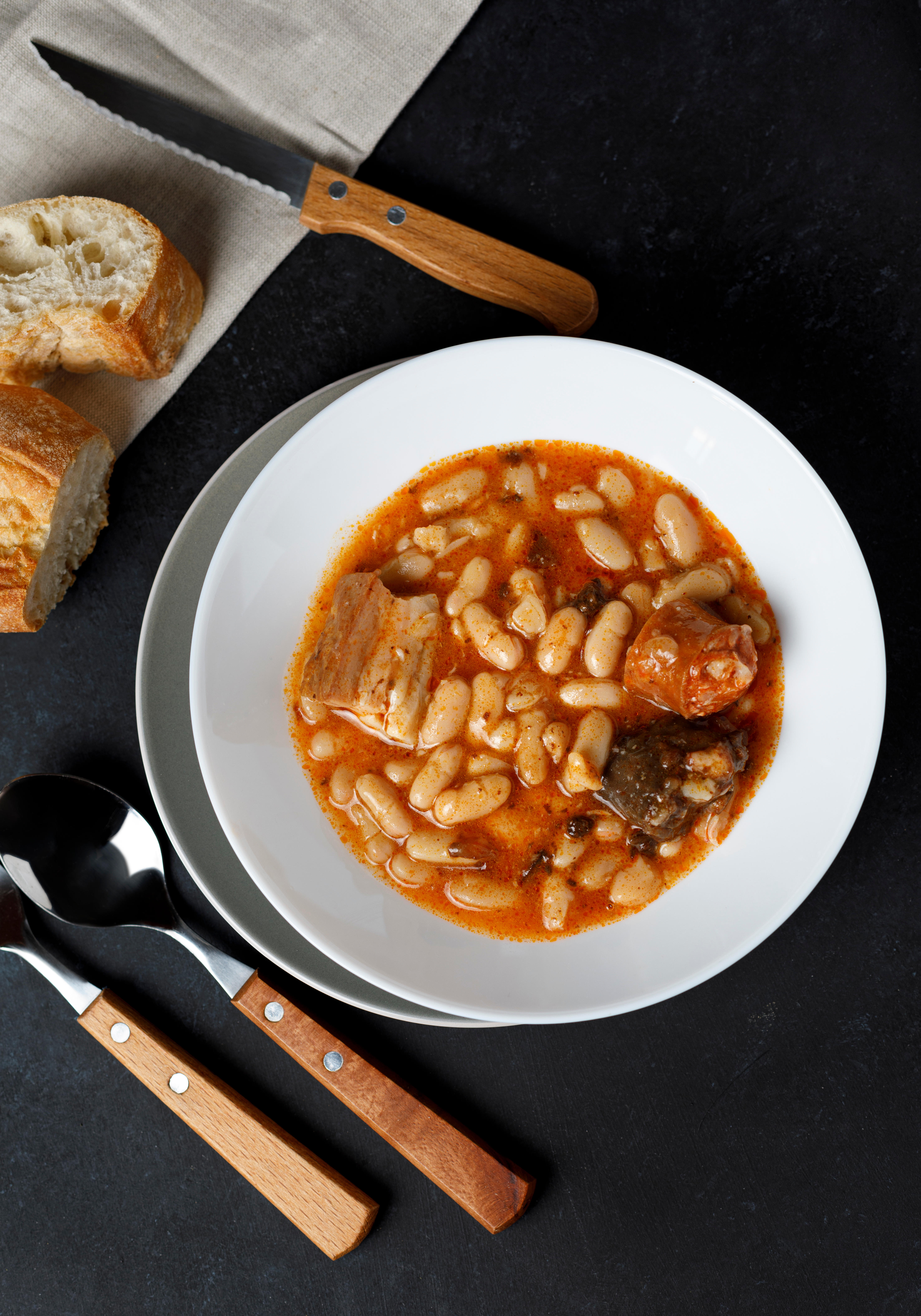 Visit the Museum of Fine Arts…

Inaugurated in 1980 in an 18th-century palace in the city centre, Oviedo’s Museum of Fine Arts holds one of the best permanent collections in Spain. It boasts some 15,000 pieces, including paintings by Picasso, Dali, El Greco and Goya (to name just a few) as well as photography, drawing, sculpture and over 5,000 glass and earthenware items. Opened in 2015, The Modern Wing – itself a notable piece of contemporary design – is dedicated to art of the 20th and 21st centuries and has a space on the first floor dedicated to prominent Asturian sculptor José Maria Navascués. 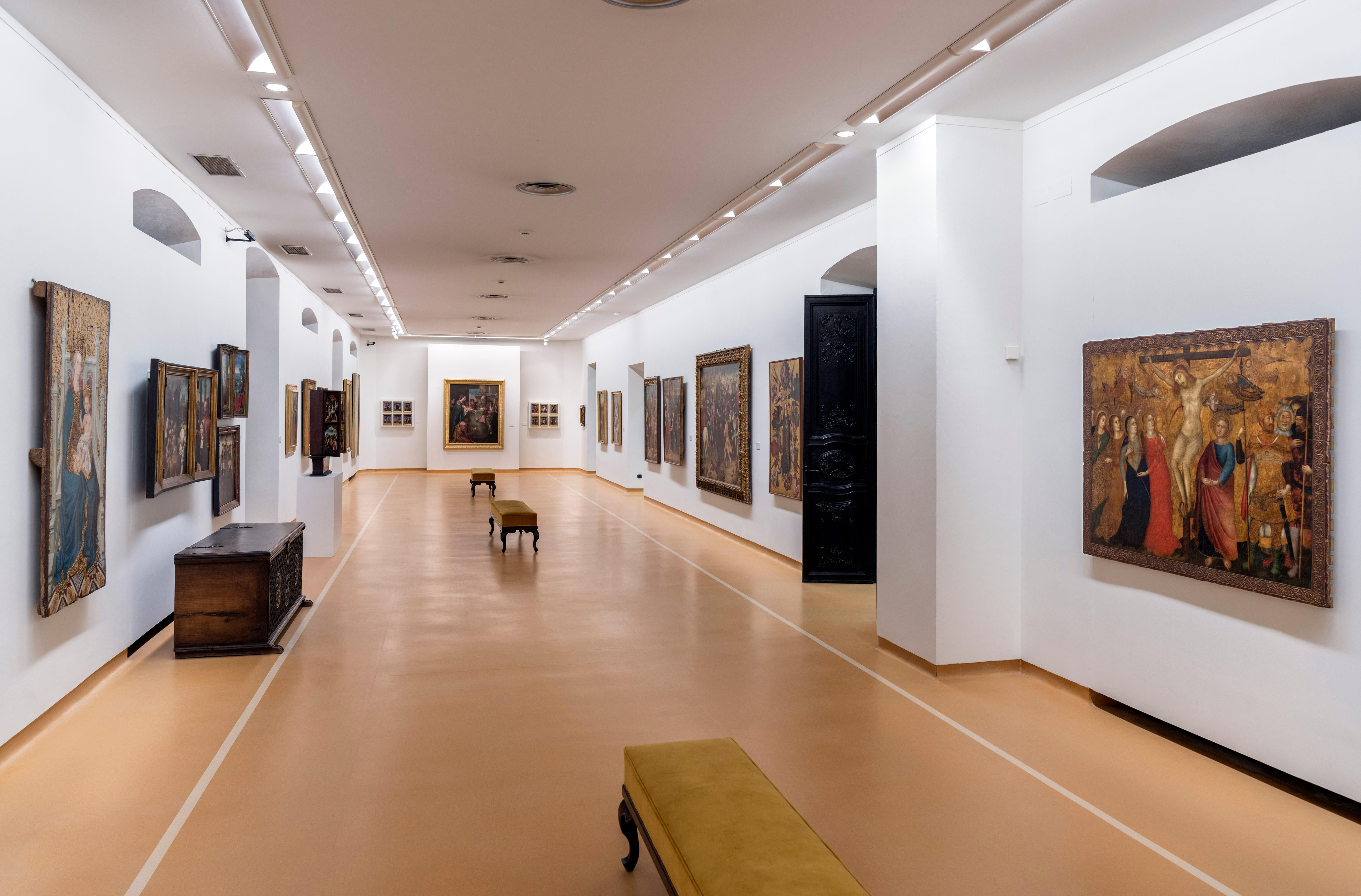 Perched high above the city on Monte Naranco – a big hill or mini mountain, depending on your perspective – is the Santa Maria church, a fine example of Asturian pre-Romanesque architecture. Reached by half an hour on bus A, or a 50-minute walk from the centre if you’re feeling fit, it was completed under the orders of King Ramiro I of Asturias in AD 842 and inaugurated in AD 848, as part of a palace-complex commanding sweeping views of Oviedo below. The building was converted into a church in the 12th century. 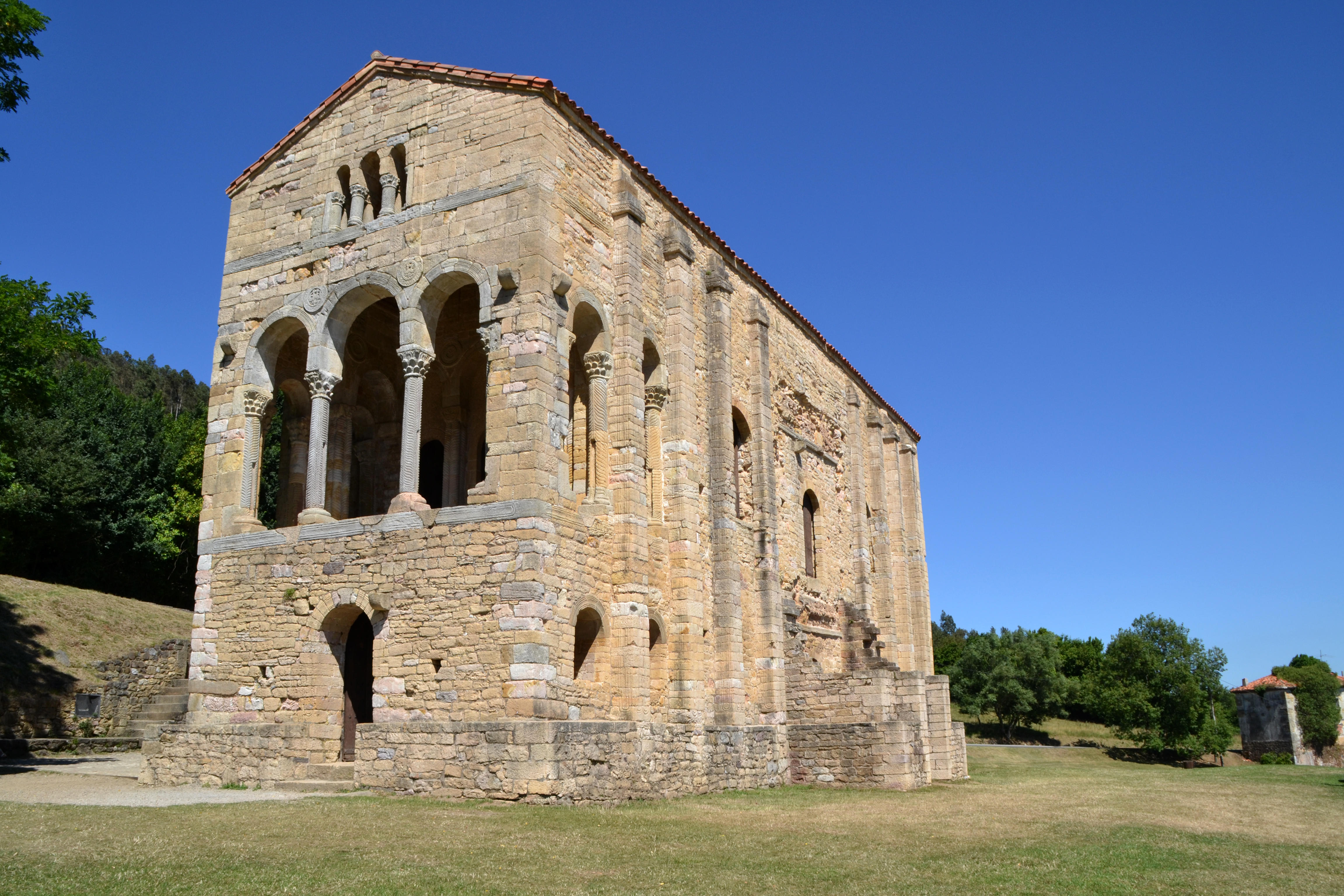 This article is an updated version of a story originally created by Esme Fox.