The Top 10 Things to See and Do in Elche, Valencia 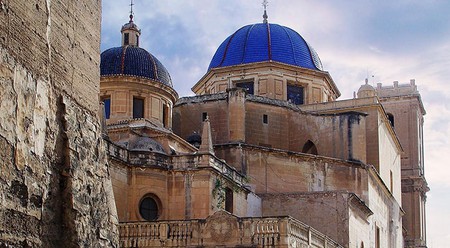 The Basilica of Santa Maria, Elche. Photo courtesy of Elche tourist board.

The Valencian city of Elche is a short drive from Alicante and makes a popular day-trip for holidaymakers on the Costa Blanca. Not just any old Spanish town, Elche is famous for palm trees, shoemaking and a very special church, and there’s much more to see. Here are our tips for making the most of your visit.

You can’t miss this local landmark and famous religious site. With its two blue domes and extravagant baroque entrance, there’s no doubt it’s exceptionally beautiful. It was originally built on the site of a ruined mosque, but the church we see today is mostly Baroque, remodelled in the 17th century. It’s known for the Misterio de Elche play, which takes place every year in the basilica. 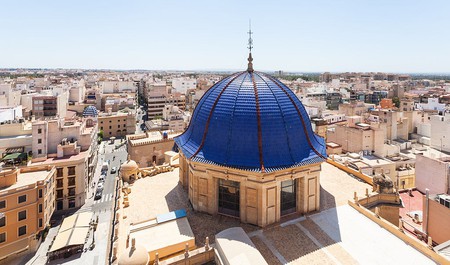 If you’re visiting in August the Misterio de Elche (Mystery Play of Elche), held on the 14th and 15th every year, is an absolute must-see. The Basilica of Santa Maria in Elche is the only Catholic church in the world allowed to put on this special theatrical and musical performance, which dates back to the 15th century. It depicts the ascension of the Virgin Mary to heaven, in which the person playing Mary is lifted through a hole in the ceiling by a piece of original (and carefully maintained) 15th-century machinery called the Deus ex machina. Mary is later crowned in an elaborate ceremony accompanied by music and song in a mix of ancient Valencian and Latin. The tradition is greatly loved by locals, and you’ll see plenty of tears in the audience. It’s also been recognised by UNESCO for its cultural importance.

Discover the history of Elche in an enjoyable and interactive exhibiton at the Palace of Altamira. The restored 12th-century palace, originally built as an aristocratic family home and later used as a prison during the Spanish Civil War, has its own fascinating history. You’ll also see a great collection of antiques and artefacts spanning the length of the city’s history. Don’t miss one of the city’s most iconic sights, La Dama de Elche (The Lady of Elche), a statue dating back to the 4th century BC and discovered here in 1897. Her history and purpose is unknown, though many believe the figure was part of a funeral urn or larger monument. The original is kept in a museum in Madrid, but while the people of Elche await her return there’s an exact replica on show in the museum’s Keep tower.

Elche is world famous for being home to some 200,000 palm trees of many different types, in various parks in and around the town. Follow the 2.5 kilometre-long Ruta del Palmeral (Palm Grove Route) which starts and ends at the Huerto de San Plácido park, near the Museo del Palmeral (Palm Grove Museum. The trail is clearly marked and easy to follow, passing the most important areas and famous trees. 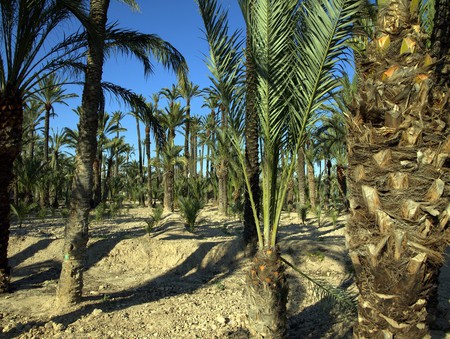 The Town Park encompasses a large part of the palm tree forest, plus the Palm Plaiting workshop. Here, all the palms to be carried in Palm Sunday processions are crafted using traditional methods in the old mill and granary building, which has Arab origins. The park also has a windmill, the Park Museum and the Rotonda, an open-air theatre.

The Priest’s Orchard, part of the Ruta del Palmeral, has been declared a National Historic Garden thanks to its outstanding beauty and important history. With Arab, Mediterranean and local influences, the large garden features palm tree specimens from all over the world in an unusual arrangement. The park’s star attraction is the 168-year-old Imperial Palm Tree.

This sweet local wine is something you must try when in Elche. Of course you can sip a glass after dinner at any restaurant in town, but if you want to try the best around and find out how it’s made you can also join a wine-tasting tour. One especially interesting place to visit is the family-run Bodegas Faelo, a more unusual organic winery where you can also learn about the fascinating method of lunar cultivation.

Elche is home to more than half of all Spain’s shoemakers, and with the chance to buy top quality shoes from big names at bargain prices there’s absolutely no reason not to indulge your inner Carrie Bradshaw. Here you’ll find the biggest shoe outlet village in Europe, the Elche Business Park. Another great place to shop with seemingly endless choice is the Salvador Artesano factory shop, where you can take a tour around the manufacturing area, starting with a glass of local muscatel wine. Serious shoe lovers will also want to see the Pikolinos shoemaking museum, telling the story of Spanish footwear all the way from espadrilles to 21st-century fashion.

One of the Costa Blanca’s favourite days out is just a short drive from Elche. The Rio Safari Park has all kinds of attractions, from a sea lion show to camel rides or feeding the hippos and giraffes, with appropriate food for sale at the park shop. The farm animals section with cows, pigs, goats, horses and sheep is always popular, too.

Elche is just a few kilometres from the coast and there are plenty of great beaches to choose from. One of the most popular is Los Arenales Del Sol; found to the north of the town of Santa Pola, it’s a long, white sandy beach perfect for swimming, with plenty of snack bars. To the south, the beaches of El Pinet, La Marina and Les Pesqueres-El Rebollo are also popular. 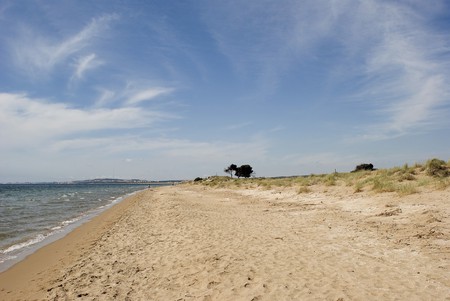