The Top 10 Things to Do in Castellfollit De La Roca, Spain 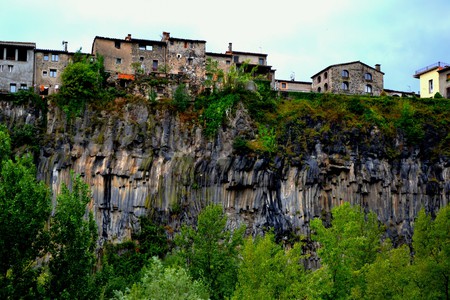 One of the most scenic villages in Catalonia, Castellfollit de la Roca is dramatically perched atop a cliffside at the meeting point of two rivers. Located in the Garrotxa volcanic area in the north of Catalonia, not far from the Pyrenees mountains, Castellfollit de la Roca is an ideal stop-off to include on your route of some of the region’s most beautiful rural towns and villages.

Get your camera out

Top on your list of things to do when visiting Castellfollit de la Roca is to stop off before you’ve even reached the village centre to snap a picture of this incredible village. Its unique location perched high upon the cliffs at the crossing of the Fluvià and Toronell rivers creates a spectacular vision you’ll want to immortalise with your camera.

If you enjoy outdoor walking then embark on this 8km round-trip journey to the nearby Sanctuay del Cós in the neighbouring village of Montagut. The route includes a number of scenic points along the way offering spectacular vistas of both Castellfollit de la Roca and the surrounding La Garrotxa volcanic area. 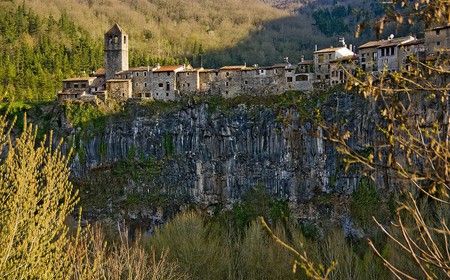 Given its unique positioning, it’s easy to see why the first inhabitants would have chosen to settle on the patch of land now known as Castellfollit de la Roca. Dating back to the Middle Ages, the old town is composed of a small network of narrow roads and small squares, many of which are made using the volcanic rock found in the area. Strolling along the streets of the old town, the sense of closeness and proximity is such that you could forget you were just metres from a sheer drop.

The old church of Sant Salvador

Perched on the cliff edge, the church of Sant Salvador dates back to the 11th century, although sadly little of its original Romanesque design remains. For centuries it was the centre of community life here in Castellfollit de la Roca and was a functioning church until the outbreak of the Spanish Civil War. 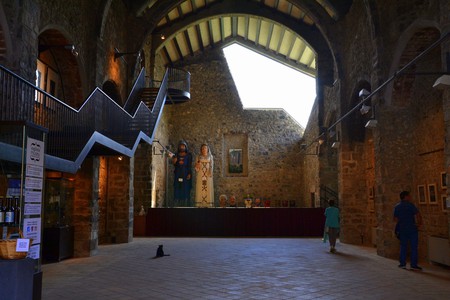 The Garrotxa volcanic area is famous for its hearty gastronomy rich in local ingredients such as Sant Pau beans and wild mushrooms. There are a small handful of traditional restaurants in Castellfollit de la Roca (such as Cala Paula ) and while they may not be as gourmet as some of the ones you’ll find in Girona or Olot, they offer jaw-dropping views you’ll struggle to find elsewhere.

Known in Catalan as the Pont Trencat, the Broken Bridge as it is called has been doomed since its construction in 1908. Soon after it was constructed, movements in the earth beneath it resulted in cracks appearing and the bridge being closed down. It was later restored towards the end of the Civil War but in 1940 huge floods resulted in the erosion of two of its main arches and the bridge has remained abandoned ever since. 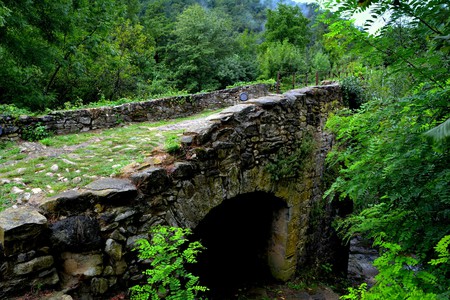 If you didn’t think the small town of Castellfollit de la Roca would be the kind of place you’d find craft beer, think again. Poch’s is the town’s premier microbrewery, making a range of small batch beers including ales, stout and fruit beers. This is also one of the friendliest places in town to grab a drink and the owners are committed to offering good service to locals and visitors alike.

Meaning the ‘Museum of Cured Meats’ in Catalan, el Museu de l’Embotit is Castellfollit de la Roca’s own museum dedicated to Catalan charcuterie. The museum opened in 1993 in commemoration of the first licence being issued 150 year earlier to allow a local family to produce embotits here. The museum retraces the history of meat curing in Spain, as well as displaying numerous machines used in the manufacture of cured meats throughout the ages. 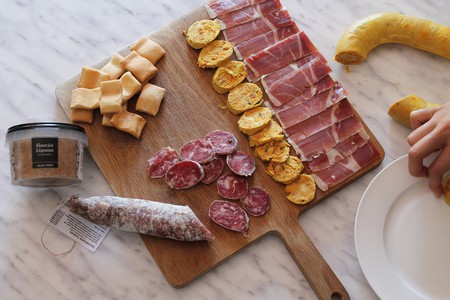 Soak up the view

If the view of the town is impressive, so too is the view you can enjoy from standing at the very end of Castellfollit de la Roca. Not for the faint-hearted, the 160 metre sheer drop which stands at the end of the village opens up onto the rivers beneath and the village commands some breathtaking views of the valley down bellow.

One of the nicest ways to soak up the views of the countryside surrounding Castellfollit de la Roca is by taking to the skies for a hot air balloon ride. A typical ride will enable you to see everything from the Mediterranean sea to the Montseny mountains, as well as the stunning la Garrotxa volcanic area’s unusual landscape. 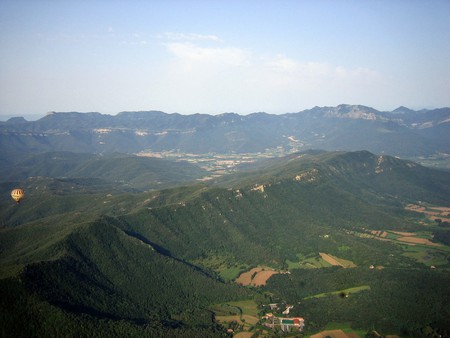