The Top 10 Things to See and Do in Besalú, Catalonia 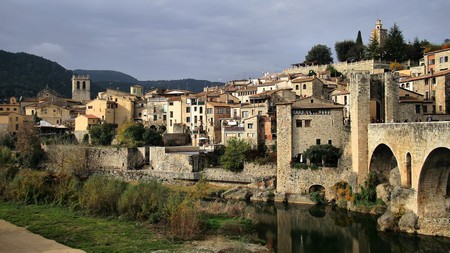 Located in the northern part of Catalonia, near the city of Girona and the foothills of the Pyrenees, Besalú is a small town with an important history. A significant economic and political hub during the Middle Ages, it was also a cultural melting pot where peaceful cohabitation between Christians and Jews was sustained for a number of centuries. Today it’s one of Catalonia’s most stunning medieval sites and a popular tourist destination: here are ten things not to miss when visiting Besalú.

Bridge
Facebook
Email
Twitter
Pinterest
Copy link
Share
Map View
One of the most striking features of the town is the 12th-century bridge which guards the entrance to the town. The bridge boasts two guard towers and a portcullis – a heavy metal grid which could be lowered to block access to the town. The bridge is one of the most spectacular landmarks in the town and offers some great spots from which to photograph Besalú, as well as being a great subject itself.
Open In Google Maps
Give us feedback

There was a significant Jewish community which arrived in Besalú around the 9th century according to some accounts, living in peace among the Christians until the time of the pogroms in the 15th century. One of the most remarkable remnants from this time is the mikvé, a type of bath used in religious ceremonies, which dates back to the 12th century and is the oldest of its kind and one of only five in Spain. 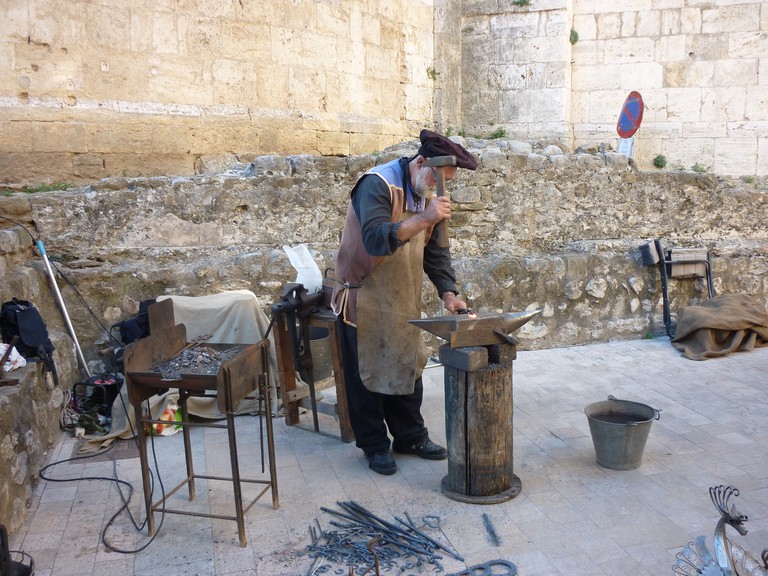 Although for much of their time in Besalú the Jews lived among the Christians, there are traces of a small Jewish quarter around the mikvé baths which is where the ancient synagogue stood. Known as the call in Catalan, the area consists of a small group of houses along narrow alleyways. Look carefully to the left of the doorway of certain houses near Plaça de la Llibertat and you’ll notice an indentation where the mezuzah or piece of parchment containing verses of the Torah was kept. 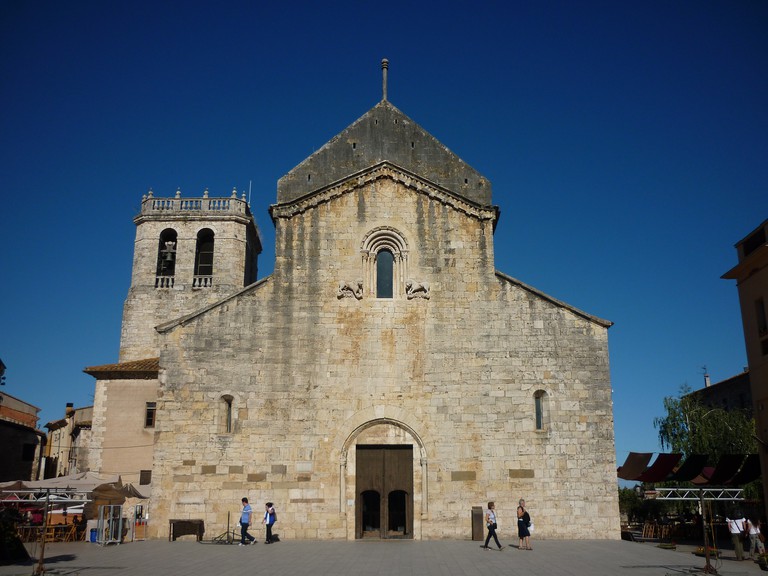 The Sant Pere monastery | © Albert Torelló
This Benedictine monastery was first founded in the 10th century but later restored in the 12th century, the result of which is still visible today. The monastery of Sant Pere – or Saint Peter – is rather modestly adorned, although in the ambulatory you will find depictions of Herod the Great, as well as images of lions, snakes and even a monkey.
Open In Google Maps
s/n Plaça del Prat de Sant Pere, Besalú, Catalunya, 17850, Spain
+34972590225
Give us feedback

The Museum of Miniatures and Microminiatures

Museum
Facebook
Email
Twitter
Pinterest
Copy link
Share
Map View
Besalú may be small but it does have a museum: a museum of miniatures. There are some 2,000 miniature artworks in the museum, the smallest of which are made to the scale of 1:100.000 and measure just a few centimetres in height. The museum opened in 2007 and is without a doubt one of the most curious things to see when in Besalú.
Open In Google Maps
15 Plaça del Prat de Sant Pere, Besalú, Catalunya, 17850, Spain
+34972591842
Visit Website
Give us feedback

The church of Sant Vicenç 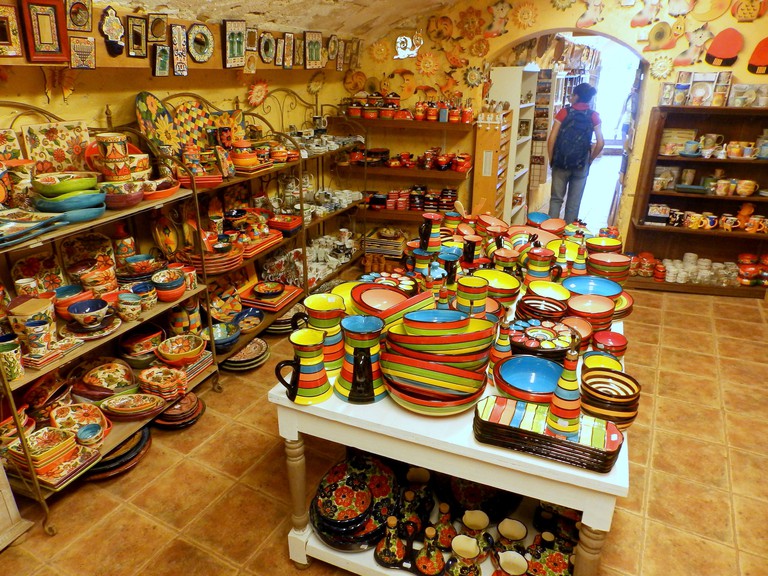 Discover local handicrafts | © Amante Darmanin
This church dates back to the 12th and 13th centuries, although the presence of a parish there was first mentioned in the 10th century. The church displays both Romanesque and Gothic features, a sign of its age, and there is a chapel within the church which is alleged to contain remnants of the True Cross of the Christian faith – hence why Besalú became a popular pilgrimage site in the Middle Ages.
Open In Google Maps
6 Carrer de Sant Vicenç, Besalú, Catalunya, 17850, Spain
+34972590055
Visit Website
Give us feedback

This 12th-century building operated as a hospital and refuge for pilgrims who made the journey to Besalù and were attended by the monks of the Sant Pere monastery. The facade is truly impressive and one of the most well-preserved of its kind in Catalonia, boasting four capitals with depictions of animals and Corinthean leaves.

This 13th-century townhouse is a fine example of the Romanesque architecture in vogue at the time and is incredibly well-preserved for its age. The house was built by the Cornellà family, one of the most distinguished families in Besalú at the time, and is still sometimes referred to as the Casa Cornellà, Llaudes being the name of the family which acquired it in the 15th century. 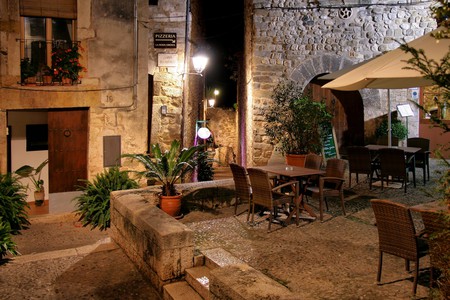 Eat at the Pont Vell restaurant

Restaurant, Mediterranean
Facebook
Email
Twitter
Pinterest
Copy link
Share
Map View
Of course a visit to Besalú wouldn’t be complete without a chance to sample some of the local cuisine. The Garrotxa volcanic area in which Besalú is located is famous for its rich culinary heritage which features local pulses, game, and recipes dating back to the Middle Ages. At the Pont Vell restaurant, which boasts a charming outside terrace overlooking the river below, you’ll be able to sample local dishes such ‘escudella‘ soup and ‘trinxat‘.
Open In Google Maps
24 Carrer del Pont Vell, Besalú, Cataluña, 17850, Spain
+34972591027
Visit Website
Give us feedback

Hike to the Sagrat Cor chapel

Finally, finish your visit to Besalú with a picturesque walk in the surrounding countryside to make your way to the small Sagrat Cor or ‘Sacred Heart’ chapel. Located on a hill overlooking the town, it offers splendid panoramic views and getting there involves a scenic route through fields and tree-lined paths. 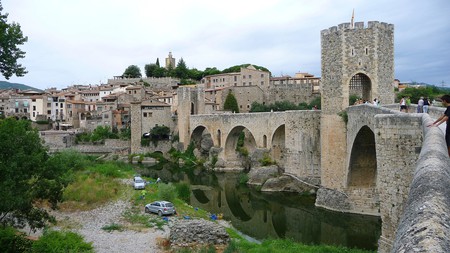