The Top 10 Things to Do and See in Pamplona 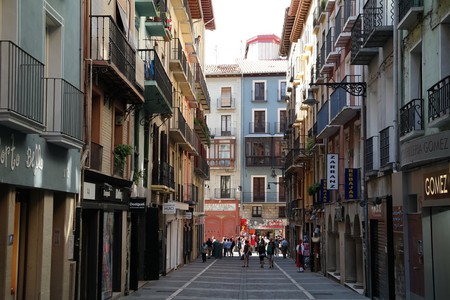 Pamplona is both blessed and plagued by its status as the world’s bull running nexus. In the last few years the local government and the media have tried to draw attention to the other, no less important, aspects of the Navarrese capital’s cultural identity. One of Spain’s greenest cities and a former bastion of the Roman Empire, Pamplona is just as much worth a visit during the remaining fifty weeks of the year for its history and modern art museums, its open recreational spaces and its glorious religious monuments.

The people of Pamplona affectionately refer to the main square as their living room (el cuarto de estar), and it is indeed the epicenter of social life in this Basque city. Historically significant as a venue for military parades, political demonstrations and even bullfights until 1843, locals while away the hours in its cafés, the most famous of which is Café Iruña, where Ernest Hemingway supposedly spent his time writing the iconic The Sun Also Rises, in which much of Pamplona’s cityscape is immortalized in prose. 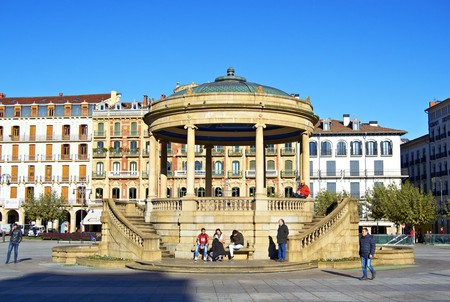 Pamplona’s latest artistic project, which has been compared to the Guggenheim in Bilbao, has global dimensions. The driving force behind its collection is the daughter of a Spanish impresario, María Josefa Huarte, who in 2008 made a generous donation which included paintings by Picasso and Kandinsky. Meanwhile the University of Navarra contributed rare photographic material from its archive chronicling artists from the 19th century. And as if that wasn’t enough, then consider that the building itself was formed by the shaping hand of acclaimed Spanish architect Rafael Moneo! 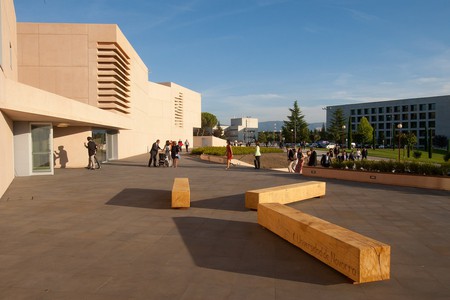 In the second week of July every year, the Spanish media turns its entire attention to Pamplona to cover the controversial, but exhilarating festival of San Fermín. Spectators rent out flats with balconies lining the Calle de la Estafeta for the best vantage point, while the more daring of festival goers participate in the running of the bulls—between the town hall where the crowd initially gathers and the bull ring itself—the third largest of its kind in the world. People typically dress for the occasion in white with red handkerchiefs around their necks, and after the adrenaline rush subsides, revelers continue the celebrations on the streets of Pamplona well into the night!

Pamplona has been a strategic enclave in the north of Spain since Roman times, and even though the Spanish army had to knock down sections of the fortress due to overpopulation within its city walls, the majority of these bulwarks still stand proud and magnificent. On summer evenings visitors can enjoy reenactments of battle scenes and concerts which seamlessly integrate these structures into their performances, while those who wish to explore the role of the city’s foundations through the ages may visit the old Fortín de San Bartolomé. 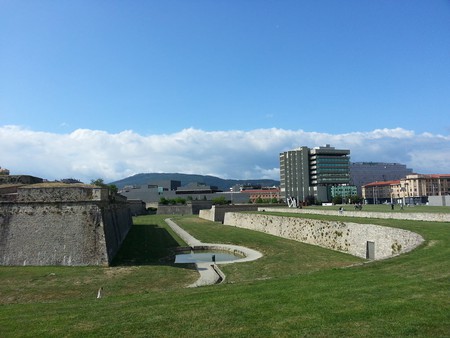 Spanning a whopping total of nearly a million square meters, Pamplona’s Riverside Park is the lung of this great city. Leaving behind the stone enclosure of the ancient city walls, you can enjoy a leisurely walk in the outdoors along the 17 kilometers of pathway meandering the banks of the Arga, Elorz and Sadar rivers. It isn’t unusual to spot the odd rower or fisherman along the way as you follow one of several routes which take walkers across bridges and into the city’s tranquil countryside.

For over twenty years Pamplona’s state-of-the-art planetarium, built in 1993 and set in the Yamaguchi Park, has wowed its 200,000 annual visitors. The origins of the universe as well as the latest discoveries in the field of astronomy are the subject of the numerous expositions projected up onto the impressive dome of the Tornamira Hall, which measures in at 20 meters in diameter—making it one of the largest of its kind in the world! A perfect all-weather activity for people of all ages, particularly those interested in the sciences. 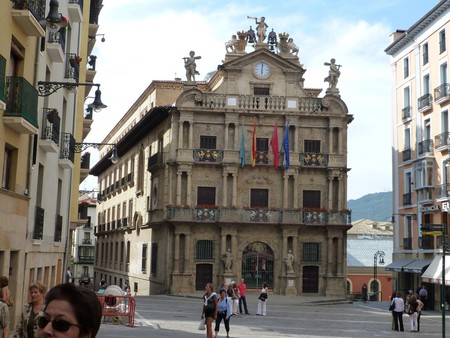 Around 10 kilometers from Pamplona in the town of Alzuza is a memorial museum which pays homage to the work of Jorge Oteiza. The much revered Basque sculptor donated the collection housed within the museum, which was designed to be an extension of Oteiza’s original workshop. The most noteworthy exhibits are those which form part of the series that won him the Grand Prix for Sculpture at the Biennial in Sao Paulo. What’s more, the avant-garde red-panel building of this museum rises on the southern slope of Alzuza, boasting a gorgeous view over Pamplona city in the distance.

Pilgrims walking the French Way on the Camino de Santiago will inevitably pass through Pamplona, which is the first major city on the Spanish side of the border and a popular stop-off for weary travelers. You don’t have to be carrying a backpack to follow in the footsteps of the pilgrims, whose route through Pamplona is lined with monuments of religious significance. After starting at the Magdalena Bridge with a stone cross (or cruceiro) bearing an image of St. James, the old city is entered via the Portal de Francia. Pilgrims normally collect their stamps from the Cathedral before continuing on through the medieval city and out through the Portal de San Nicolás. 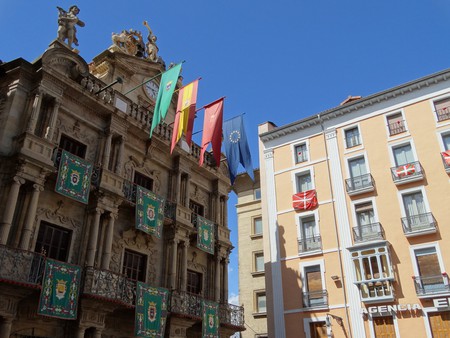 In the western part of the city centre lies the Ciudadela, nestled within the Casco Antiguo and built in the 16th and 17th centuries as a means of protection against incursions by neighboring France. Much of its distinctive pentagonal shape has been preserved despite two of the sides being knocked down to make room for the Avenida del Ejército. Outside the perimeter of the walls is the Parque de la Vuelta del Castillo, a preferred place for locals to view the fireworks during the festival of its patron saint, San Fermín, or else go for a run or casual stroll on a nice afternoon.