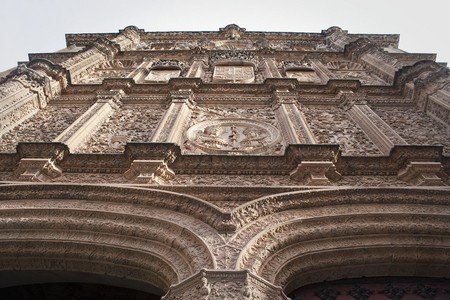 Intricate stone carvings on the facade of Salamanca University | © Ramoncutanda/Flickr

With its grand university buildings, narrow cobbled lanes and not one but two cathedrals, Salamanca’s beauty is obvious. But the city also holds some treasures that are less easy to spot. Hidden in plain sight on the facades of its grandest buildings are some mysterious stone carvings that have long puzzled visitors to the city. Will you be able to spot them?

The most famous mystery carving in Salamanca is the frog. When students arrive at the famous University of Salamanca, the oldest in Spain and the third-oldest in the world, they’re greeted with a challenge: if they can spot the little frog carved onto the facade of the university’s main building, they’ll have no trouble passing their exams. 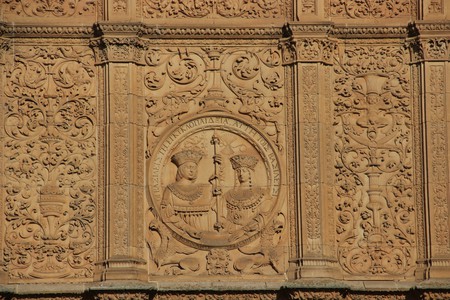 Carvings on the facade of Salamanca University. Photo: Flickr

You can search for it yourself in the intricately carved stonework above the main entrance, La Puerta de Salamanca. Built during the 16th century, the highly decorative stone entrance sits on a small plaza where you will often find groups of tourists and students craning their necks as they look high and low in an attempt find the frog. Spoiler alert: if you want to find it for yourself, look out for a skull on the right-hand side of the facade.

If you’re wondering what it symbolises, recent studies say that the skull represents Seville’s Prince Juan, who died as a teenager in 1497, before the facade was built. The frog apparently represents the doctor who tried frantically to save his life, Doctor Parra, who thus gave Salamanca’s frog its nickname of Parrita (‘Little Parra’).

For more curious carvings, take the short walk to the New Cathedral, which is only new in comparison to the Old Cathedral next door. The New Cathedral was actually built between the 16th and 17th centuries. It has a similarly detailed facade, full of fantastic figures and grotesque gargoyles, built in the gothic and baroque styles. As you look at the different figures depicted on the gothic relief of the cathedral’s lateral door, including the usual saints and monsters, you might be surprised to see what is very clearly an astronaut. There were definitely no astronauts back in the 17th century, so what’s going on here? 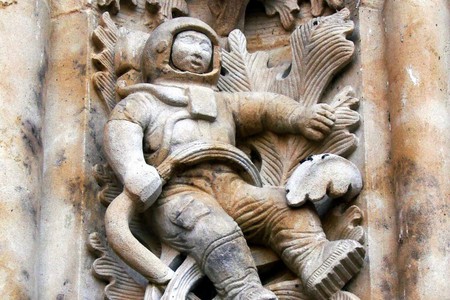 To make things even more mysterious, near the astronaut you can also find a mischievous little gargoyle, smirking at you and very clearly eating an ice-cream cone. We’re pretty sure they didn’t have those back in the Middle Ages either, so this is getting pretty weird. Could the cathedral’s architects have seen the future? 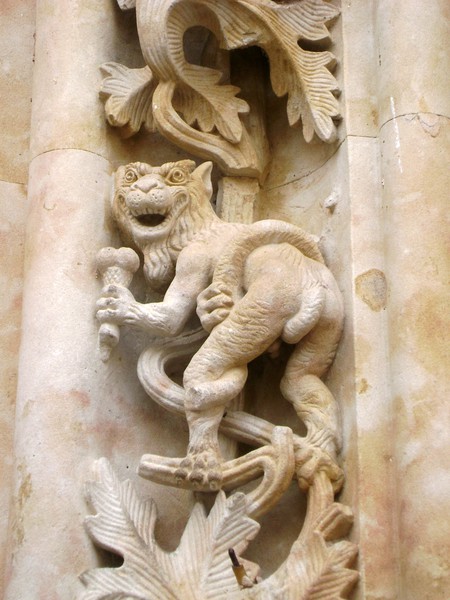 In fact, the astronaut and the gargoyle were both added in 1992 by mischievous stonemasons in charge of doing some restoration work on the cathedral. Maybe they were just playing a joke on visitors, but apparently these workers regularly leave their mark on buildings by leaving some curious detail behind. Jerónimo García, the chief restorer, apparently chose an astronaut as a symbol of the 20th century, while the gargoyle is said to represent the university’s students.

Make sure you spend a little time looking up at the decorative stone facades of Salamanca’s most important buildings on your next visit to the city – you never know what weird and wonderful things you might spot there.