The Porrón: How a Revived Drinking Tradition Is Unifying Barcelona 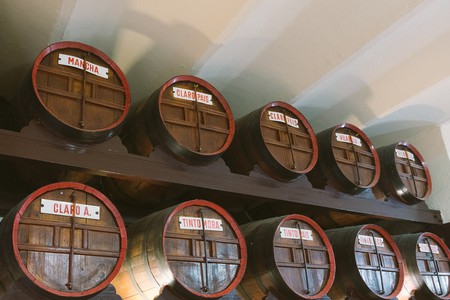 A new generation of Barcelona residents is re-embracing the porrón, an ancient Catalan drinking custom that fosters community spirit and even played a role during the city’s most political times.

Perhaps you’re used to drinking wine from a glass – or a mug, or the bottle itself. In Northern Spain, residents forgo all of these methods and instead opt to squirt wine directly into their mouths using a device called a porrón. For centuries, drinkers from the Catalan region have used the porrón – a unique glass or ceramic decanter with a pointed spout that is tipped up to spurt out a thin jet of wine down their throats. Instead of needing individual containers, a group can all share a single porrón. The tradition helps subtly unify the participants and has been a communal integrator for many years. 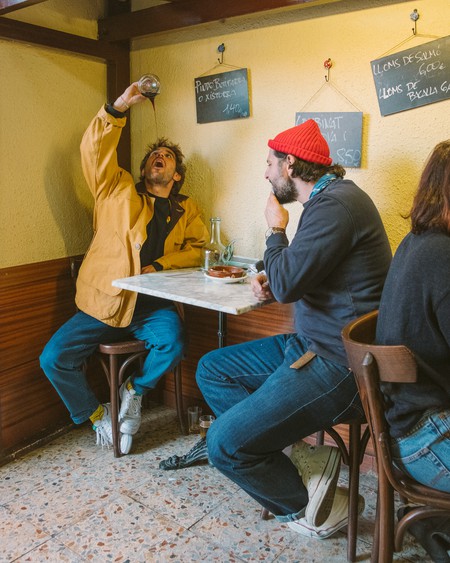 Each member of the group helps themselves to a mouthful at a time without the object ever touching their lips. To do so, they must hold the porrón at arm’s length, tilt their head back and pour wine into their mouths like water from a watering can. 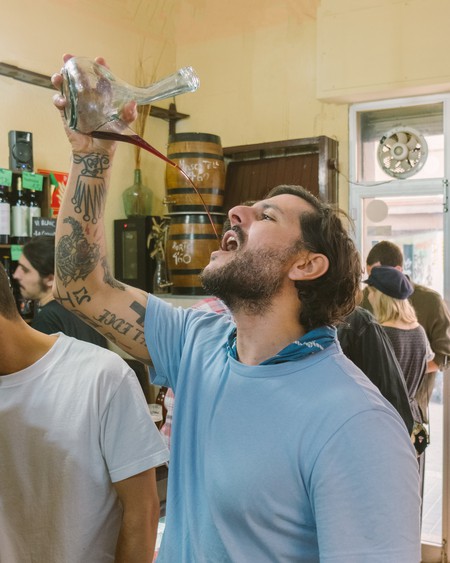 Pouring from a porrón takes skill and technique | © Clemente Vergara

Sounds easy right? Not so much. Mastering the technique takes plenty of practice, and as with most things, drinking from a porrón becomes much more difficult under the influence. Most beginners usually end up pouring wine down their chins rather than their throats. 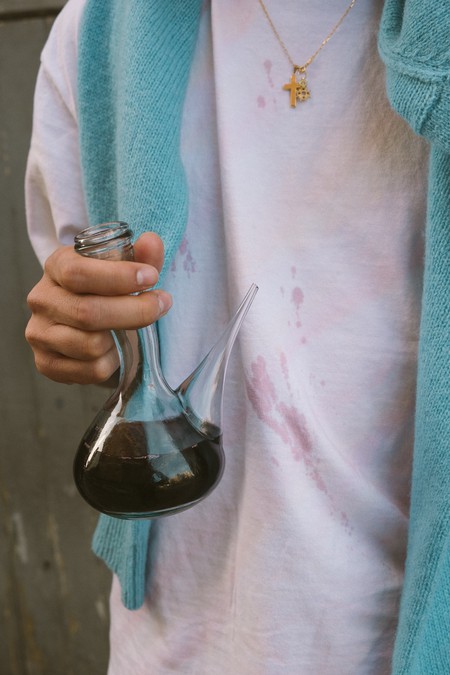 Aiming can be tricky, but a fun feat to attempt | © Clemente Vergara

Still, many attempt the feat for fun, sociability, cutting down on dishes or just improving their hand-eye coordination. However, Marc Miñarro Garcia, the owner of Bodega Montferry in Barcelona, says there’s another, more important reason to keep the tricky tradition alive.

“The porrón is a vital part of the Catalan heritage,” Garcia explains from behind the zinc counter of his busy backstreet bar. “Most people in the Barcelona region will have grown up among porróns. In most families, there is one hiding in a cupboard somewhere. And if you ask most people, they will remember their parents or grandparents getting them out for special occasions.” 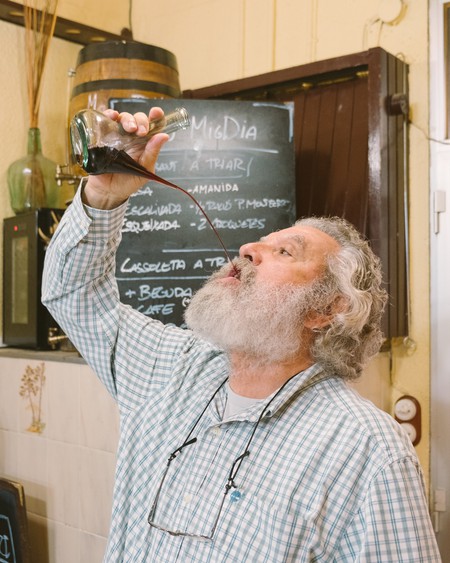 Sadly, as life took on a faster pace in the ’80s and ’90s, the once-popular porrón became an overlooked vestige of the past, says Garcia. So when he took ownership of the bar, he decided to maintain the tradition and even designed his bar’s logo as a cupid standing on a barrel and drinking from the vessel. 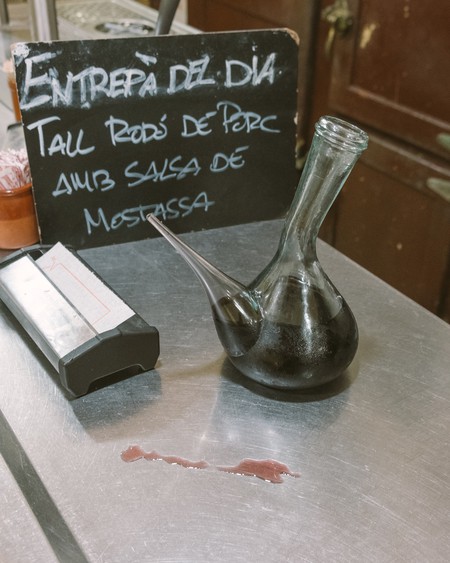 Porróns are usually made of glass or ceramic, with a long thin spout | © Clemente Vergara

“What I love most is the social aspect of the porrón,” Garcia adds. “Drinkers must all share, instead of each having their own glass. It’s the opposite of what everyone seems to be doing today: staring down at his or her phone, listening to music and not needing any external interaction. Enjoying a porrón together breaks down these barriers, forcing us back into society.” 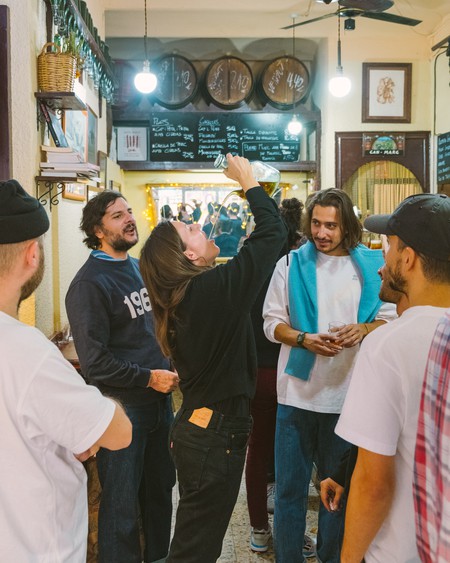 Bodega Montferry is a gathering spot for the tradition | © Clemente Vergara

After decades of neglect, it looks like the porrón could be on its way back thanks to a new generation of Catalan drinkers. No longer is it solely the preserve of ultra-local joints like Bodega Montferry. Now, a growing number of trendy Barcelona hotspots are offering customers the chance to use a porrón – even if it is for the novelty factor.

“People are bored of wine snobbery,” says Christel Weemaes, the co-founder of Porrón Molón, a small company that sells wine in a handmade ceramic porrón instead of a bottle. She attributes a shift in attitude as part of the cause for the sudden revival of the old custom. “The porrón helps bring back wine drinking to the essence of what it’s all about: having a good time with friends and loved ones. It’s not about overthinking everything and pretending to be so sophisticated. However, that’s not to say that our wines aren’t good quality – plus the ceramic porrón offers the added advantage of naturally maintaining it at a perfectly cool temperature.”

Politics could also be another reason behind this reversal in popularity. At a time when independence has never been so hotly debated in the Catalan region, some say the porrón’s resurgence goes hand in hand with the awakening of the Catalan identity. In 2016, a pro-Catalan group, the Blaus de Granollers, ran a campaign to make the porrón into an emoji, which gained more than 2,500 signatures.

“[The porrón] is much more than a kitchen tool,” the group wrote in a letter addressed to WhatsApp CEO Jan Koum and uploaded on change.org. “It helps to create community, to strengthen bonds during meals. It makes you feel part of a team. Besides, it helps us Catalans remember our roots – and you already know that if you lose your roots, you lose your identity.” 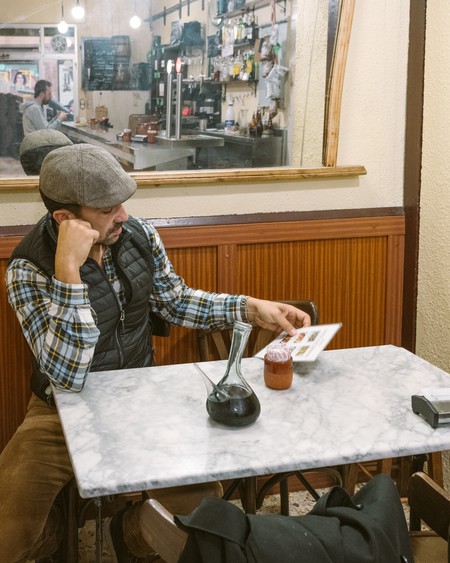 The porrón’s political side isn’t new. The object is also rooted in the left-wing ideal of equal sharing and even has ties to anti-fascism. The author George Orwell noted the tradition for helping foster a gathering of equality, community and freer political discussion when fascism was taking over the country. Orwell’s Homage to Catalonia (1938) – the author’s eyewitness account of the Spanish Civil War – is one of the first English records of the porrón. When the book was written, Barcelona was a hotbed of left-wing politics and one of the last parts of the country defying the push of right-wing forces under the command of the soon-to-be dictator of Spain, General Franco. Unfortunately, according to Orwell, this resistance is divided between irreconcilable anarchist, communist and socialist factions. The only way they can all sit down around a table together is to drink from a porrón, this traditional communal wine jug.

“We […] drank out of a dreadful thing called a porrón,” he wrote scathingly in the book’s first chapter. “I went on strike and demanded a drinking-cup as soon as I saw a porrón in use. To my eye, the things were altogether too like bed-bottles, especially when they were filled with white wine.”