Imagine submerging your body into a pink-water lake and being surrounded by pink flamingos? An improbable scene? Not at Las Salinas of Torrevieja, a rose-tinted lake located in Valencia, Spain.

Las Salinas de Torrevieja is one of the most impressive natural parks of Valencia and is located nearby another water reserve known as the Laguna de la Mata. Las Salinas de Torrevieja spreads across 1,400 hectares and is separated from the Laguna de la Mata by an anticline (a formation of stratified rock raised up) called the Chaparral, but both are connected to the ocean through a canal known as Acequión. This canal was created for the purpose of obtaining salt from the ocean in the 13th century. As a legacy of its past, there are huge mountains of salt piled high along the shore. 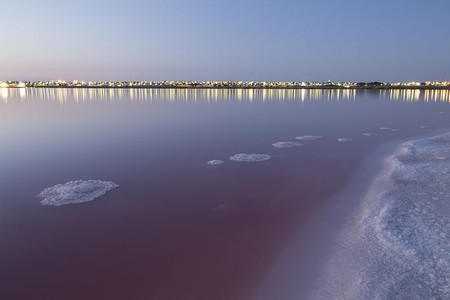 This natural space offers a list of some amazing species of flora, although there is not much vegetation in the area due to the high levels of salinity in the water. Only a few plants such as alacranera (Arthrocnemum macrostachyum) and different types of juncus, suaedas, salicornas and salsolas could survive in this highly salty water environment. When the time of flowering comes to Las Salinas, it is possible to see a rare show of saladillas (lavender), groundsel and even the complex but showy shaped orchids (collina) in full bloom. However, towards the south of the lake where the salt levels are not as high, it is possible to find more common Mediterranean vegetation such as pine trees and even eucalyptus. 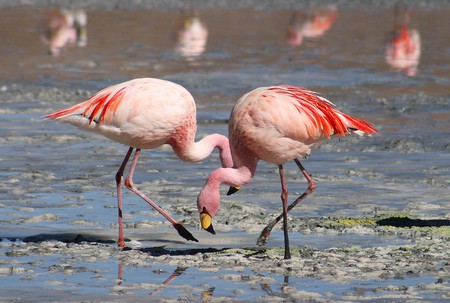 The true stars of this lake are the archaeas (a micro-organism) and dunaliellas (micro- seaweeds) which synthesize the components of the salty water in order to survive. The existence of these two forms of life are what provides the pink, unique hue of the water. Nevertheless, a word of caution: the combination of high salt levels and the presence of these small organisms can result in a rather strong smell emanating from the lake.

Regarding other living forms, the dream comes true when flamingos appear on the sight. The pink color of the flamingos fits the rosy pigment of the lake. Like an image taken from fantasy, the natural park can be home to up to 2,000 flamingos during breeding season. It’s also important to mention the presence of necked grebes, stilts, harriers, terns, and other migratory aquatic birds. Last but not least, the presence of brine shrimp is also important, as this singular life form requires a high level of salinity to survive. 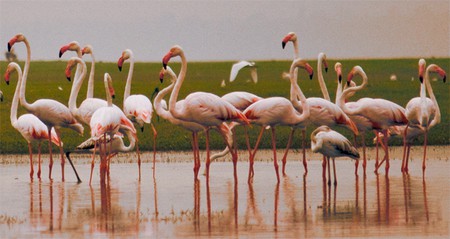 Another one of the effects of the high level of salt in the water is the same fun phenomenon that occurs in the Dead Sea, namely the ability to float on the surface of the water. Being relatively shallow, this salty lake allows everyone to enjoy one of the finest of nature’s free spas. The benefits of salty water are good to expel the toxins from your body and have an exceptional effect on your skin. 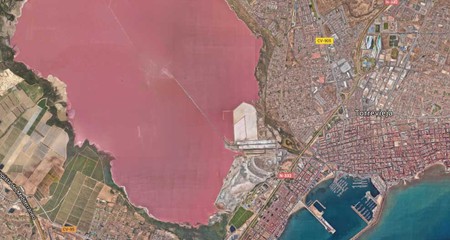 The tranquil and calm waters of Las Salinas de Torrevieja can prevent skin and lung diseases besides improving the full condition of your health. Locals who also come to this secret free spa are the perfect people to help you locate the black mud, full of great properties to help improve your skin. Apply the white sand on your body to provide it with a deep exfoliation, and the black mud on your face to moisturize the skin, and leave it on for at least 30 minutes to get the full effect. The therapeutic results will amaze you. However, if there are some scratches on your skin, be careful: the salty water can sting. 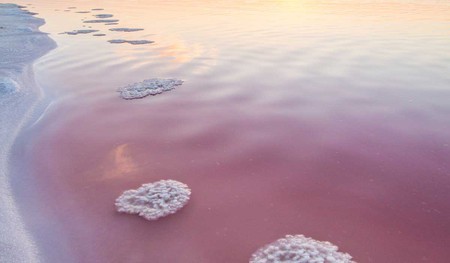 Las Salinas de Torrevieja has plenty of spots for enjoying any number of outdoor activities. However, remember to bring your own water to rinse your skin with after your day of relaxation as there are no showers. In order to not only heal your body but also your soul, take a peaceful walk (even on horse or a local small train) and explore this incomparable corner of the world. As the wild birds provide the soundtrack to the lake, you probably still won’t be able to believe your eyes.