The Most Unusual Sports to Try in Barcelona 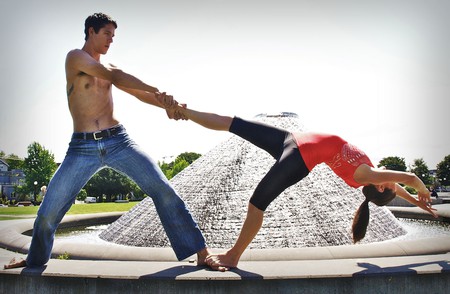 Whether you’re looking to keep fit while you’re on holiday or pick up a new hobby, there are plenty of sports to try in Barcelona. Unsurprisingly, there’s a lot more on offer in the Catalan capital than just tennis and volleyball. Here are some of the most fun and unusual sports you can try when in Barcelona.

The origins of capoeira can be traced back to 16th century Brazil when slaves invented it as a way of practicing self-defence techniques without being seen by colonialists. Capoeira combines martial art and dance movements and is accompanied to the sound of music while capoeiristas perform a series of rapid movements which include kicks, turns and jumps. Capoeira is a very sociable sport and a great way to meet people while doing something both physically challenging and fun.

Named after the man who is said to have designed it, the Cyr wheel is a large metal wheel, similar to an over-sized hula hoop. The idea is to perform acrobatic movements while spinning around in the wheel: think cart wheels, hanging spins and even no-handed balancing acts. If it sounds insanely complicated, well, it can take a while to garner the confidence but the key is to really get a sense for how the wheel moves. Once you’ve mastered the basics you can quickly progress to some crazily impressive moves.

It’s one thing lapping lengths in a swimming pool, it’s quite another doing so in the open sea. However it’s not always safe to swim out in the open water, especially when there are boats or jet-skis around. For this reason, Barcelona council inaugurated specially designed sea swimming lanes which are clearly marked out for swimmers and others to see. The lanes measure between 0.6km and 1.2km in length and take swimmers past the Mar Bella and Barceloneta beaches.

Where to try: Opposite the Espai Mar in Mar Bella beach

As its name suggests, acroyoga is a combination of yoga and acrobatics which usually involves at least two people working together. One person, known as the ‘base’, lays on the floor and generally uses their arms and legs to prop up the ‘flyer’ while a ‘spotter’ stands guard. The flyer can try a range of different moves, some static and some more active – which involve moving from one position to the next while in the air.

Developed in the late 1980s by an acrobat from the Cirque du Soileil, aerial silk involves a very long, thick piece of material which is used to hang from the ceiling and perform various moves. Wrapping your body around the cloth, you can climb it, perform acrobatic moves and let yourself unravel at dramatic speed. This is a great exercise for developing core strength and muscle tone.

Always liked the idea of water sports but didn’t fancy the fast pace or high intensity of surfing or wind-surfing for example? Paddle-boarding involves standing up on a large board, not dissimilar to a surf board, and using a paddle to manoeuvre your way around. If it sounds easy, paddle-boarding requires great balance and core strength if you don’t want to end up in the water. Once you’ve mastered the basics, jazz things up a little with a paddle yoga class.

Not only is coasteering an action-packed, fun-filled outdoor activity but it’s also a great way to explore the countryside. Coasteering typically involves a combination of swimming, climbing, jumping and even abseiling along the coastline (alternatively, canyoneering is the same thing but through canyons). Just north of Barcelona, the Costa Brava is incredibly beautiful and boasts some great coasteering spots. Jump into the water from a few meters high before swimming to shore and continuing your route by foot.